Anything to do with games at all.
Post Reply
1097 posts

There's one stuck pixel in my display that I noticed, but it's right at the bottom, and you can only really notice it when looking at an otherwise black screen with nothing else to focus on, so it's not an issue when in use at all.

Played through Vader Immortal I last night, and the sabre combat felt so good. I haven't quite got the hang of deflecting blaster shots, but otherwise it feels so natural an intuitive. Will have to try out the dojo later.

Is it actually possible to die in it? I'm sure I took enough hits from blasters and sabres that I should have been dead, but there doesn't appear to be any health metre.

And there's something so cool about meeting Vader in person, and playing around inside your ship until the Star Destroyer comes floating overhead.

Knoyleo wrote:Is it actually possible to die in it? I'm sure I took enough hits from blasters and sabres that I should have been dead, but there doesn't appear to be any health metre.

I don't think so and if you do (you can fall off things I think) it just spawns you back in and you carry on.

Its really more of an experience than a game, although the Dojo parts of the games obviously do have fail states.

kazanova_Frankenstein wrote:I'm missing my Quest. I returned it twice and kept getting ones with dead pixels. Also one of them had a wierd issue where it would not stay in standby when plugged in. I wonder if they have resolved these issues now.....

Sounds really unlucky, I haven't noticed any issues with mine since launch (though I don't want to look too closely for pixels because if I see one I don't think I'll be able to un-see it).

Anyone thinking about buying it, till the end of January (since the 21st) Vader Immortal is free.

Its not a long experience (2-3 hours I'd say for the story), but it is very cool.

This is the right thing to do. As soon as I saw it I could not unsee it, and it really pulled me out of the experience. I wish I wasn't so precious and obsessive about stupid things like this but I am....

Been playing around with Oculus Link this week on the Quest, have to say that once I got it working (which was a faff!) it has been really good and the experience is just as good as using the CV1. It's so nice not having to worry about the cameras and there's no noticeable difference in tracking or visuals either.

Got sidequest loaded up, and tried out steam VR in the lab, and it works pretty well. There's some noticeable lag, but nothing too severe. Might be more of a hindrance in anything faster paced, but by the time I get round to that, Link will be properly available, although having now only experienced untethered VR, I've no idea how people play this tethered to a PC. Just playing Vader, I was turning around and around on the spot, and I'd definitely have throttled myself if there was a cable involved.

Meant to say earlier that I'd bought the following for Quest a few days ago... 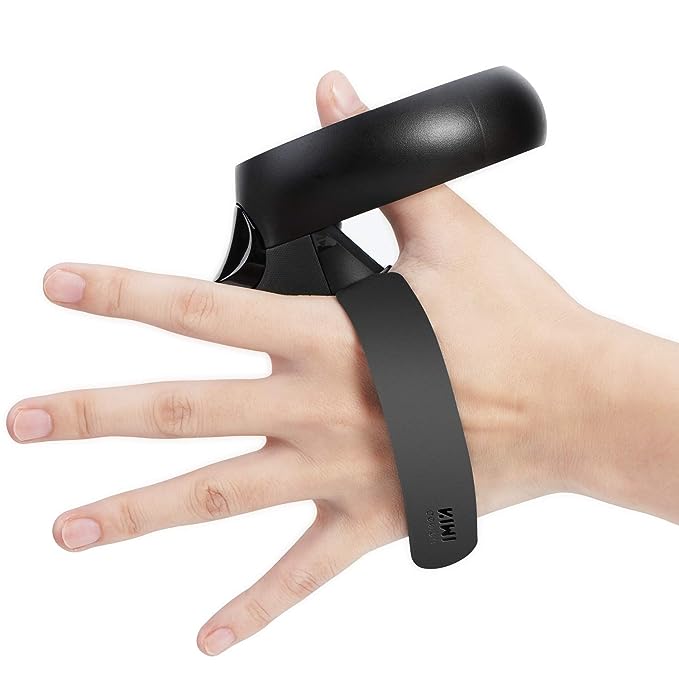 Just tried them out, they are going to take a little getting used to but I think they are worth getting (especially at the deal price).

Does anyone have a recommendation on a link cable to get for the Quest until the official one is out?

Not seen any solid recommendations so far that haven't also been sold out. I've signed up to be notified when the official ones go on sale.

In the meantime, I fired up Skyrim via Virtual Desktop, and I'm really impressed with how smooth it feels over WiFi. The game is certainly showing its age, but it feels so different playing it in VR than it did when I played it before. Drawing and aiming arrows is a real challenge, but melee combat is so easy to cheese through by just flailing the controller about

Can't wait to fire up some mods and get the graphics settings tweaked. It will be interesting to see what my system can actually handle, biggest bottleneck is the CPU, so I'll just have to lean on the graphics card intensive games.

Got the Oculus Rift app set up on my PC, and got Vader installed on there, too, so should be interesting to directly compare how that runs compared to natively on the Quest.

Shame there aren't more Quest/Rift cross buy titles, especially as a lot of games are cheaper on the Rift store than the Quest.

Knoyleo wrote:Shame there aren't more Quest/Rift cross buy titles, especially as a lot of games are cheaper on the Rift store than the Quest.

I'm actually quite surprised that so many games actually support it.

Its only really Superhot, Moss, Beat Saber, Job Simulator and Red Matter that don't have it that I wish did, but I can see why they don't.

I was surprised about Pistol Whip (definitely worth picking up by the way) and Espire 1 both having cross buy, looks like The Climb will be when its released this week too which is awesome.

Can't wait for The Climb, and cross buy makes that even sweeter.

Not sure how mad I am for shooters right now, which probably sounds weird given how VR is basically built for FPS, but I mainly want to try other stuff.

Has anyone tried Thrill Of The Fight? It's pretty well reviewed, but the Creed demo has kind of softened my excitement for boxing sims. Is it significantly better?

This is the one Oculus recommend and the one I've been using but as Knoyleo says, it's sold out at the moment. https://www.amazon.co.uk/gp/product/B01 ... UTF8&psc=1

This worked too for me and is available but the cable isn't as thick as the Anker one so didn't seem like it would be so durable in the long term - https://www.amazon.co.uk/gp/product/B07 ... UTF8&psc=1

This is the one Oculus recommend and the one I've been using but as Knoyleo says, it's sold out at the moment. https://www.amazon.co.uk/gp/product/B01 ... UTF8&psc=1

This worked too for me and is available but the cable isn't as thick as the Anker one so didn't seem like it would be so durable in the long term - https://www.amazon.co.uk/gp/product/B07 ... UTF8&psc=1

I've also seen this combo that apparently a few people have said works,

Basically shorter version of the same cable (Though only available in a 3 pack for some reason) and a USB extender designed to work with VR Headsets.

Anyone new to PC VR (Or even those who've been there for a while) should check out some of these free games/demos/experiences.


EDIT: Just tried "Aircar" and it's like flying through Blade Runner. Chill as strawberry float and very cool. Not for a first time experience as you have full 6DOF in the ship and it'll turn stomachs but it's really nice. There's nothing to really do in it, but just parking up somewhere and listening to some sweet Synthwave while watching other aircars move through the rain in the nightsky was really, really cool.

I've definitely been wanting to get into some more VR games so I might actually start working my way through the ones in the video there.

I might even stream them. Just need to clear my playspace and work on the positioning of the sensors and it'll be perfect (Still on a basic Rift).

One demo to try is the tech demo for the knuckles controllers. It is unlisted. https://store.steampowered.com/app/887260/

The Index is a better quality headset but....Lego.

Are the base stations for the Index/Vive much of a hassle to set up? How do you need to actually position the two of them in a pretty square room? My gaming PC is in my office room which isn't huge, so I'd mostly be looking at playing while sitting down with the chair pushed back from the desk.

I found them pretty simple to set up, I just plonked them in opposite corners, angled them to look at the centre of the room, and plugged them in.

Do you need to mount them on the wall or a stand or anything so they're high up? Or can I just put them on a desk?

I chose to mount them high but you can put them on desks as long as they can be seen by the hmd.