Let's make it the Best. Game. Ever.

A tour Group is led by their guide to the Ciudadela Temple, lit via candles, which is said to be guarded by the spirit of Menherah, the Maya deity. 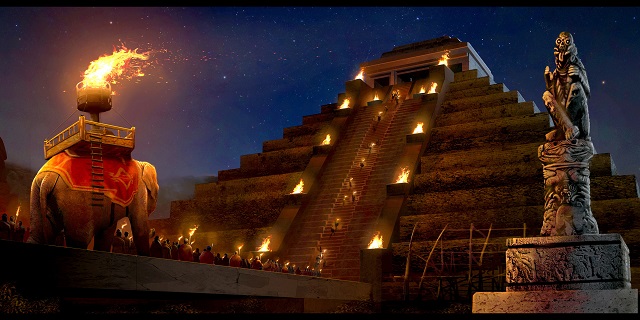 "Innate scripture, decorative design, the Maya were a fascinating race" exclaims the tour guide. "Like most ancient civilisations, they obeyed the laws of the land imposed upon them by their perceived deities. On the left here, we have Menherah's personal golden guillotine, beautifully preserved. Through here, we have some steps leading up to what at first appears to be an architectural masterpiece - the burial mask of Menherah carved into the wall... 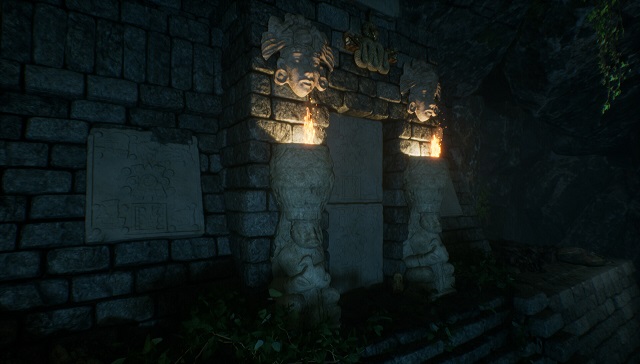 But it holds a secret. It's not just a celebration - it hides a passage that leads to a hidden room. A room that, allegedly, nobody but Menherah himself knew about. It's known in historical literature as his 'Inner Sanctum'. Come, let us see."

"Here, he would ponder on critical decisions and obtain total privacy. Legend has it that, under a full moon, direct descendents of Menherah could inherit his ability to transform into mythical beasts if they offer up the ancients a sacrifice in here."

The group slowly began to gaze up, focusing on a narrow gap in the stone ceiling. Through it, the moon was visible. 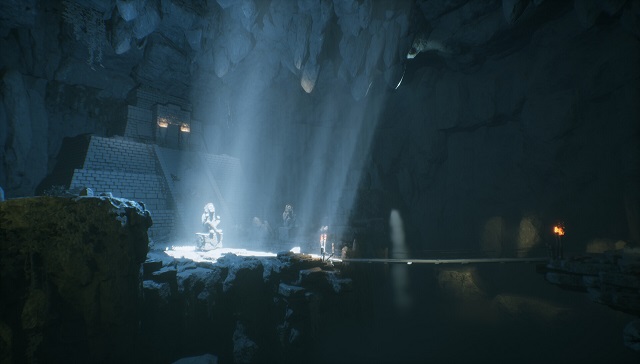 "It's a full moon tonight!" joked a tourist.

"I know", said the guide, in a menacing tone.

Suddenly, the guide began to convulse, as did several tourists. Heads dropped, it appeared that they were in trouble... but then, simultaneously, their heads snapped up. They looked... different. Their bodies had changed, it was dark, but something was definitely different. The moonlight caught their faces.

"Finally", one said. Slowly, each of them bared their teeth and revealed their claws. That night, a massacre took place in the Inner Sanctum. A new Pack had been transformed in the image of Menherah.

The aim of the game, as always, is for the uninformed majority to identify and eliminate the informed minority, the werewolves, who themselves are looking to wipe out the innocents and rule civilzation. It is based on the Party game Mafia. Our game alternates between day and night phases in real-time. These phases are explained in the rules section. If this is still somewhat unclear to you, don't worry, all will become very clear once the game gets going. Some of you will be werewolves, some of you will be innocents, some may have special abilities, some may have something else going on entirely.

1. All roles are disseminated randomly.

3. Sharing of your Role PM or any of its contents is strictly prohibited. Nobody but you is allowed to see your private message which states your role. Neither can you read it out loud over any voice communication service, copy and paste it into the game thread or share your Role PM in any other way you can imagine. Anyone found to have breached this rule will be immediately removed from the game. This is a game of deduction.

4. No print screening of ANY PMs relating to this game whatsoever. You are free to quote/fabricate PMs from other players (i.e. not messages from me) as they are open to interpretation/manipulation but no screen posting.

5. Each day will follow a similar series of events: a mayor must be elected via popular consensus by 3pm each day. The same player cannot be Mayor twice in a row. The elected Mayor will then decide on his choices for that evening’s lynch by 5pm. All players will then be able to cast a vote via PM to me by 8pm. I will aim to announce the results between 20:30-21:00. The night phase then begins; all roles with night phase activities should have their PMs to me by 10pm when I will look to start rolling these out.

6. All players get one vote each day only unless otherwise stated. The Village is a democracy.

7. The elected Mayor will spend the night in the Inner Sanctum which protects him/her from all attacks.

8. Some days may see different events happen, that affect voting procedures, or how players are killed. I have meticulously planned out the schedule for this game, everything has been planned well in advance.

9. When you are dead, please stay dead. No death posting. If someone innocently stumbles into the thread seemingly unaware that they are dead, I will be lenient, but please inform them ASAP. Please also do not reveal anything to other players once you are dead – not even to other dead players – because, as the past has shown, these things have a way of impacting the game. Please just observe the game and wait until the end to ask any questions or give any feedback you may have.

10. Every player must post at least once within every 48 hours. Players that fail to do this will be removed from the game each morning. If you are going away somewhere and may have trouble getting signal or accessing a device for 5 minutes, please let me know beforehand and I will consider your situation. This WILL be tracked by myself at various times throughout the day, so don't fall foul.

Day 1
The game begun!
The Brave Eight volunteered to go grave-robbing.
OrangeRKN was elected Mayor.
He nominated Albear and Chocolate-Milk for the chop.
Albear got the chop. He was a Human.
The Watching Artist (Human), Clarkman (Lover) and Red Gyaradan (The Governor) were found dead. That's Not a Growth (Lover) committed suicide.
Jenuall was found dead. He was The Lycan.

Day 3
Parksey was elected Mayor.
He nominated DML and Lagamorph.
DML got the chop. He was a Mason.
PsychicSykes (Human), Hexx (Human) and Pedz (Mason) were found dead.
Zilnad was found dead. He was The Bodyguard.

Day 5
An historian offered the group the use of The Huracan Wheel.
FatDaz was elected Mayor.
FatDaz decided The Fateful Eight.
The Alchemist Penguin (Human) and False (The Voyeur) got the chop.
Rightey (Human) and Vermilion (Human) were found dead.
LewisD was found dead. He was a Human.

Day 7
Rubix was elected Mayor.
He nominated Joer and Lagamorph.
Call And Answer. He was The Vote Rigger.
Lagamorph got the chop. He was a Human.
FatDaz (The Surveyor) and Parksey (The Doppelganger) were found dead.
Joer was found dead. He was a Human.

Oh go on then.

In for the win

Such a tease though. No info?

No idea what this is about, but i received an invite and so am up for giving it a go.

I am here to tell you that you breached GDPR regulations by messaging me.

But now that we are out of the EU who cares!!

Dandle in the Wind
Go for it, Danmon!
Joined in 2008
Location: Peach Mountain

In. But please play nice!

(I'm a little excited though. Whatshisname who's running this has some good thoughts)