Anything to do with games at all.
Post Reply
295 posts

I'm not in the business of "sticking up" for Randy Pitchford, but I think there may be more to the Claptrap payment story than the headlines suggest.

I wouldn't take Pitchford at his word.

Saint of Killers wrote:I wouldn't take Pitchford at his word.

Maybe; but it seems odd that Eddings' claim is so vastly different to Pitchford's. One of them must be quite mistaken. It would seem unusual that anyone would do voice acting for such major games without being paid.

If it were anyone else then yes there's a chance that Eddings might only be telling half the story, but Pitchford is a renowned buffoon and compulsive liar so....

Pitchford is known for straight up lying to the media and on his Twitter, sometimes in the most egregious manner. I mean over and over. That's his thing.

In a war of words there's no contest who everyone should believe here.

EDIT: Also worthy of note here; I'm pretty sure Eddings had another primary role in the game that was not VO. Pitchford's initial tweet refers to generic 'employment' on the game and even then he contradicts the official strawberry floating statement from Gearbox

Eddings’s previous role at Gearbox was Vice President of Strategic Partnerships & Licensing, where he worked with retailers to distribute merchandise and even had talks with film producers about potential movie deals. Tales from the Borderlands happened, in part, because of a deal Eddings struck between Gearbox and Telltale Games...

It appears that Eddings had not wanted to continue doing the voice work for Clap-Trap:

In an interview held last September with Destructoid, Eddings wrote:“I have absolutely given up doing Clap-Trap,” Eddings said, a stern inflection in his voice. “The only time I’ll do the Clap-Trap voice is when I can make a kid smile and if it’s something of value to them. For me, I’ve got a lot of work to do at Rooster Teeth Games and there’s no reason for me to go back and revisit anything. I wish them [Gearbox] the best, and it’ll be interesting to see what they do, but no; I will not be reprising my role for Clap-Trap in any video game.”

As I say, I'm not eager to defend Pitchford. But I'm also cautious about laying into him in this case; at least whilst the available evidence seems to be extremely unclear.

Pitchford is cock, but yeah this tale is unclear.

Regardless, I'll grab BL3 at a later date. My back cat is getting bigger by the month. Going against my original plans I've bought a new console and several games in the last couple of months. I've actually banned myself from buying any games on PC for the remainder of the year in an attempt to lessen the load.

One thing with Pitchford as well is he said Troy Baker refused to reprise his role as Rhys, after Troy Baker said he was never asked. When Pitchford said that 'Baker had turned it down', Baker said Pitchford 'needs to check his facts'.

So it's decided then, we consult Holly?

So you have the word of pitchford a known liar against 2 others both giving stories similar enough to sound believable.

A real shame because I love borderlands but this PR shitshow is really taking the wash off what should be a great game launch.

Saint of Killers wrote:I find Claptrap annoying and so I'm mixed on this... but my guess is Pitchford didn't adjust the wages he offered Eddings by taking into account previous work / the character's popularity amongst fans. Oh and Nolan North and Troy Baker won't be returning either. Again, mixed feelings on that as well

But there's no doubting that Pitchford is a buffoon.

Good. They're boring as strawberry float.

I'd rather Rhys still be Troy Baker tbh.

Saint of Killers wrote:I find Claptrap annoying and so I'm mixed on this... but my guess is Pitchford didn't adjust the wages he offered Eddings by taking into account previous work / the character's popularity amongst fans. Oh and Nolan North and Troy Baker won't be returning either. Again, mixed feelings on that as well

But there's no doubting that Pitchford is a buffoon.

Good. They're boring as strawberry float.

I was wondering what Eddings was referring to, re the $12M in one of his previous tweets. 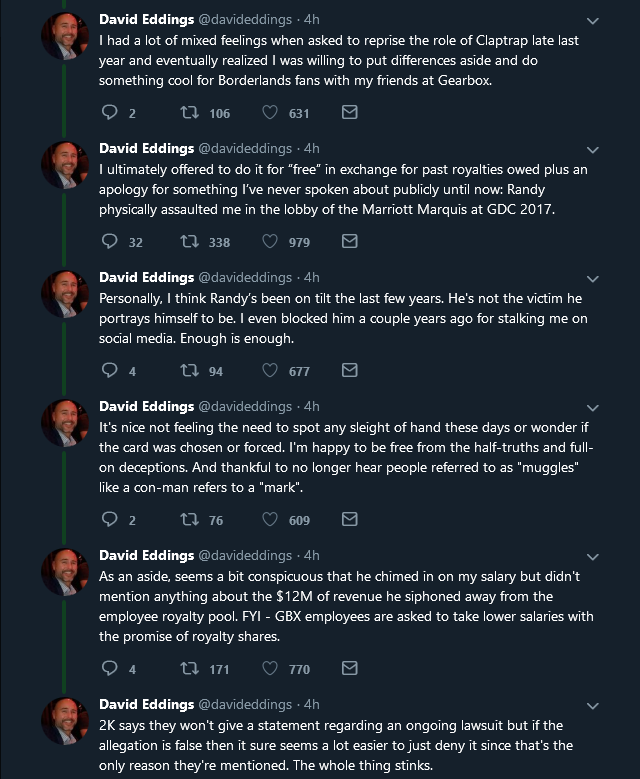 This is shaping up to challenge Fallout 76 and Anthem as biggest marketing mess up of this generation..... come on Randy, you can do it.

As it gets closer more stuff will come out and he will lose it in true comedy style.

Also Claptrap is Borderlands. Crazy that he is out.

I mean if that's not true Pitchford cooks straight up sue, or at least threaten to.

With I completely agree with your conclusion, that article also references TheQuartering, a quasi-alt right shitlord who recently set his followers onto games journo Kirk McKeand after the latter suggested milkshakeing fascists was, you know, actually a decent expression of civil disobedience. So I immediately distrust it as a source.

Here's another version of the same story without the shitlord


Return to the award-winning shooter-looter Borderlands 2 for an all-new adventure that sets the stage for the upcoming Borderlands 3. Commander Lilith & the Fight for Sanctuary is available now on Xbox One, PS4, and PC, and is free for owners of Borderlands 2 or Borderlands: The Handsome Collection until July 8.


Answer the call and charge head-first into the mayhem as one of four badass new Vault Hunters, each with their own deep skill trees and insanely powerful abilities.

The original shooter-looter returns, packing bazillions of guns and an all-new mayhem-fueled adventure. Blast your way through new worlds and enemies as one of four brand new Vault Hunters, each with deep skill trees, abilities, and customization. Play solo or join with friends to take on insane enemies, collect loads of loot and save your home from the most ruthless cult leaders in the galaxy.

A MAYHEM-FUELED THRILL RIDE
Stop the fanatical Calypso Twins from uniting the bandit clans and claiming the galaxy’s ultimate power. Only you, a thrill-seeking Vault Hunter, have the arsenal and allies to take them down.

YOUR VAULT HUNTER, YOUR PLAYSTYLE
Become one of four extraordinary Vault Hunters, each with unique abilities, playstyles, deep skill trees, and tons of personalization options. All Vault Hunters are capable of awesome mayhem alone, but together they are unstoppable.

LOCK, LOAD, AND LOOT
With bazillions of guns and gadgets, every fight is an opportunity to score new gear. Firearms with self-propelling bullet shields? Check. Rifles that spawn fire-spewing volcanoes? Obviously. Guns that grow legs and chase down enemies while hurling verbal insults? Yeah, got that too.

QUICK & SEAMLESS CO-OP ACTION
Play with anyone at any time online or in split-screen co-op, regardless of your level or mission progress. Take down enemies and challenges as a team, but reap rewards that are yours alone – no one misses out on loot.