Saint of Killers wrote:With how this year is going, one of these are heading right for us:

This star is unique because it has all the key features of a white dwarf but it has this very high velocity and unusual abundances that make no sense when combined with its low mass.

Maybe the star put the brick on the accelerator pedal. 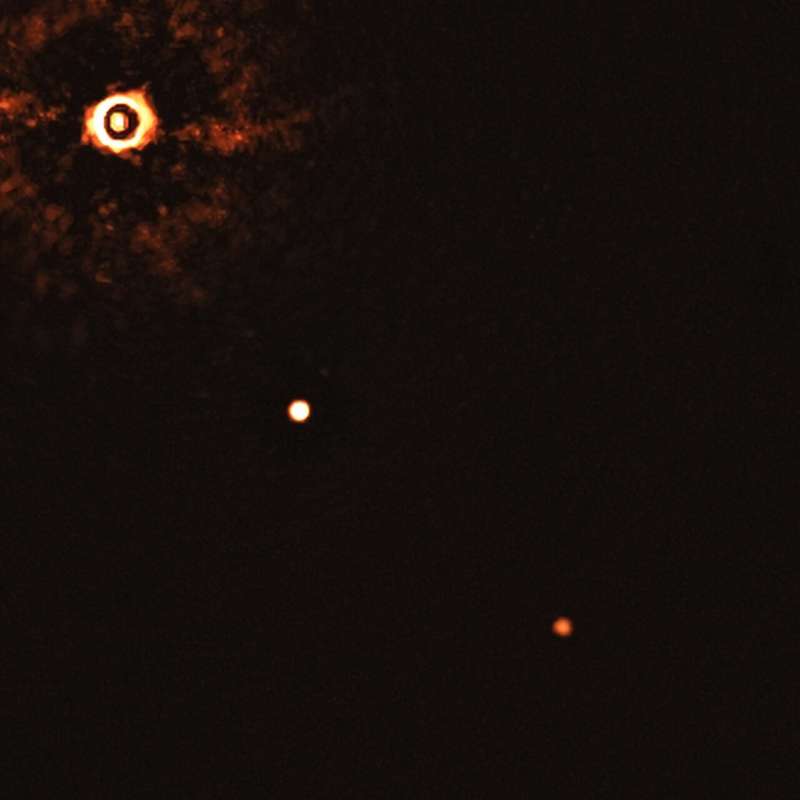 The European Southern Observatory's Very Large Telescope (ESO's VLT) has taken the first ever image of a young, sun-like star accompanied by two giant exoplanets. Images of systems with multiple exoplanets are extremely rare, and—until now—astronomers had never directly observed more than one planet orbiting a star similar to the sun. The observations can help astronomers understand how planets formed and evolved around our own sun.

Just a few weeks ago, ESO revealed a planetary system being born in a new, stunning VLT image (http://www.eso.org/public/news/eso2008). Now, the same telescope, using the same instrument (www.eso.org/public/teles-instr…vlt/vlt-instr/sphere), has taken the first direct image of a planetary system around a star like our sun, located about 300 light-years away and known as TYC 8998-760-1.

"This discovery is a snapshot of an environment that is very similar to our solar system, but at a much earlier stage of its evolution," says Alexander Bohn, a Ph.D. student at Leiden University in the Netherlands, who led the new research published today in the Astrophysical Journal Letters.

"Even though astronomers have indirectly detected thousands of planets in our galaxy, only a tiny fraction of these exoplanets have been directly imaged," says co-author Matthew Kenworthy, Associate Professor at Leiden University, adding that "direct observations are important in the search for environments that can support life." The direct imaging of two or more exoplanets around the same star is even more rare; only two such systems have been directly observed so far, both around stars markedly different from our sun. The new ESO's VLT (www.eso.org/public/teles-instr…anal-observatory/vlt) image is the first direct image of more than one exoplanet around a sun-like star. ESO's VLT was also the first telescope to directly image an exoplanet, back in 2004, when it captured a speck of light around a brown dwarf, a type of 'failed' star.

"Our team has now been able to take the first image of two gas giant companions that are orbiting a young, solar analogue," says Maddalena Reggiani, a postdoctoral researcher from KU Leuven, Belgium, who also participated in the study. The two planets can be seen in the new image as two bright points of light distant from their parent star, which is located in the upper left of the frame. By taking different images at different times, the team were able to distinguish these planets from the background stars.

The two gas giants orbit their host star at distances of 160 and about 320 times the Earth-sun distance. This places these planets much further away from their star than Jupiter or Saturn, also two gas giants, are from the sun; they lie at only five and 10 times the Earth-sun distance, respectively. The team also found the two exoplanets are much heavier than the ones in our solar system, the inner planet having 14 times Jupiter's mass and the outer one six times.

Bohn's team imaged this system during their search for young, giant planets around stars like our sun but far younger. The star TYC 8998-760-1 is just 17 million years old and located in the southern constellation of Musca (The Fly). Bohn describes it as a "very young version of our own sun." 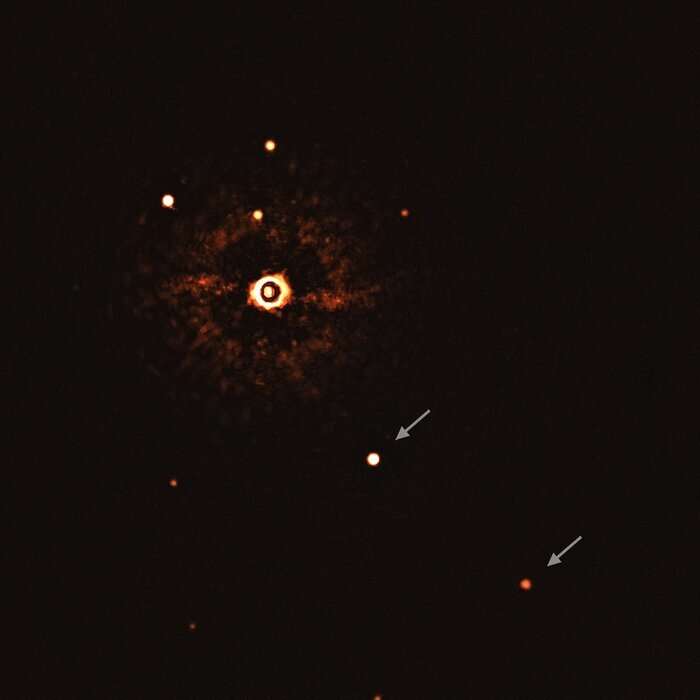 These images were possible thanks to the high performance of the SPHERE (www.eso.org/public/teles-instr…vlt/vlt-instr/sphere) instrument on ESO's VLT in the Chilean Atacama desert. SPHERE blocks the bright light from the star using a device called coronagraph (en.wikipedia.org/wiki/Coronagraph), allowing the much fainter planets to be seen. While older planets, such as those in our solar system, are too cool to be found with this technique, young planets are hotter, and so glow brighter in infrared light. By taking several images over the past year, as well as using older data going back to 2017, the research team have confirmed that the two planets are part of the star's system.

Further observations of this system, including with the future ESO Extremely Large Telescope (ELT), will enable astronomers to test whether these planets formed at their current location distant from the star or migrated from elsewhere. ESO's ELT will also help probe the interaction between two young planets in the same system. Bohn concludes: "The possibility that future instruments, such as those available on the ELT, will be able to detect even lower-mass planets around this star marks an important milestone in understanding multi-planet systems, with potential implications for the history of our own solar system."

Amazing. But what are the 3 bright spots right by the sun?

The sun looks like an eye and so I am guessing the 3 bright spots are a few of the ringwraiths.

Combine them. Alien ringwraiths and they are heading this way.

I for one welcome our new pillow stabbing overlords

The sun looks like an eye and so I am guessing the 3 bright spots are a few of the ringwraiths.

And now I want to watch the trilogy.

*with acid for blood and a mouth-mouth for a mouth.


They're over there, by their theremin.
Top
Post Reply
1093 posts