David Blaine's at it again. 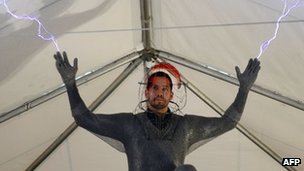 US performance artist David Blaine is to spend three days and three nights amid an artificial lightning storm as part of his latest feat of endurance.

Beginning on Friday, he will stand surrounded by seven Tesla coils - electrical columns that shoot out small bolts of lightning - for 72 hours.

"I had wanted to do this for years," the 39-year-old said at a launch event on Tuesday at New York's Pier 54.

Blaine will wear a chain-mail suit, helmet and headphones throughout.

He will suck water through a tube, urinate through a catheter and will be fasting.

Blaine demonstrated to reporters how the stunt - called Electrified: One Million Volts Always On - will work on Tuesday by shooting arcs of lightning out of his hands.

The body suit - a so-called Faraday suit, named after the English scientist Michael Faraday - and helmet will serve as a barrier between himself and the electric currents.

Stuart Weiss, Blaine's doctor, said one of the stunt's main risks was exposure to the ozone and nitrous oxides that are a by-product of ionised air.

Ionised air, or plasma, is created when air is separated into positive ions and electrons, making it much more conductive.

A ventilation system will ensure the magician has breathable air, while a visor in his helmet will protect his eyes from ultraviolet radiation.

The magician's past endurance stunts include sitting in a Perspex box in London for 44 days and standing on a pillar in New York for 35 hours.

So he's staying in one place for 72 hours basically...

Oh, and let's remind ourselves of this gem:

are we allowed to do this type of thing to special people?

The oppressed are allowed once every few years to decide which particular representatives of the oppressing class are to represent and repress them in parliament.

The git wizard's back. Joy of joys.

I do hope nothing goes wrong....

Essentially as DC said in the op Blaine is just standing in one place for 72 hours and fasting. Now whilst I know that I couldn't do this I still have no interest in watching someone else do it.

David Blaine's life can be summed up in one word: WHHHHHHHYYY

Jax wrote:David Blaine's life can be summed up in one word: WHHHHHHHYYY

To be fair, he was a fantastic magician/illusionist when he first hit it big. I would assume he still is, but he just hasn't done anything with his talent recently. It's just these last few bizarre events that's tarnishing his name ...


Hexx wrote:Ad7 is older and balder than I thought.

I'm sure it'll be an electrifying experience for him

Ooh ooh he's becoming one of the teslar troops from Red Alert II! Finally, we pop-culture has given us all a reason to live.

What a waste of electricity (unless it kills him).

Jax wrote:David Blaine's life can be summed up in one word: WHHHHHHHYYY

To be fair, he was a fantastic magician/illusionist when he first hit it big. I would assume he still is, but he just hasn't done anything with his talent recently. It's just these last few bizarre events that's tarnishing his name ...

This, his street magic was brilliant

Errkal wrote:It is amasing how people dont seem to be abel to do that.

..still he's not as lame as Chris Angel.