Mig 21 bought. I refuse to get any others till I am set up.

Christmas Sale starting on December 23nd at 15:00 UTC and ending on January 5th at 9-00 UTC, we are offering a huge 70% off sale on most DCS products from our e-shop at:

Prices might be slightly better from the Steam counterparts due to exchange rates etc..

I really want to get some of these, but even in the sales they seem really overpriced.

£10 for what appears to be one plane dlc! Tell me I'm wrong Scrooge and I'll take the plunge.

You're wrong, these are highly detailed aircraft that react as close to how they would in real life. Most are study sims where there is a gooseberry fool tonne of documentation and manuals to read and you can go through the full set of procedures that an actual pilot would do.

The next stage after these study sims is getting a full on flight sim with pistons and gooseberry fool.

Realise I haven't updated this in a while, and there is no time like the present! ( NOT UPDATED IN OVER A YEAR!!! For shame


Special offers for those who don't have the modules yet.

This weekend we are offering a bundle deal on the aircraft that started it all for Eagle Dynamics - The Su-27 Flanker! This bundle includes both Su-27 for DCS World and the Su-27: Ultimate Argument Campaign for $14.99.

The second big bundle we are offering this weekend includes two of our most popular aircraft with accompanying campaigns. This bundle at $49.99 includes:

DCS: A-10C Warthog
A-10C: The Enemy within Campaign
DCS: Black Shark 2
Black Shark: Republic Campaign
As with the Flanker bundle, this deal will start on Friday, 22 January at 1500 GMT and last until Monday, 25 January at 0900 GMT.

No news on the anticipated F18 module.

Belsimtek with The Fighter Collection and Eagle Dynamics are happy to announce that DCS: F-5E Tiger II is available for pre-purchase from the DCS shop. The pre-purchase provides both a 20% discount off the retail price and access to the Early Access coming in July-August 2016.


The F-5E was developed by Northrop Corporation in early 1970s. The light tactical fighter is an upgraded version based on previous F-5A developments. The F-5s’ combat role encompasses air superiority, ground support, and ground attack. Given its mission flexibility, ease of operation, and low cost, the Tiger II has, and continues to serve, air forces across the globe.

The F-5E has trapeziform wings, two turbojet engines equipped with afterburners, and tricycle landing gear. Pitch, roll, and yaw control systems are hydraulically actuated in order to relieve control stick and rudder pedals forces. Artificial feel system is built in pitch and roll control systems to simulate aerodynamic loads for the pilot. For example: after the landing gear is retracted, left and right movement of the control stick is limited by a spring mechanism to prevent excessive roll rates.

A pressurized cockpit and air conditioning system ensures pilot safety at all altitudes up to the service ceiling. The pilot is also provided with an oxygen mask and anti-g suit. The cockpit is fitted with a Martin Baker SIII S-3 ejection seat, two UHF radios, automatic direction finder, radio navigation system, and a standard set of navigation lights. Landing-taxi lights are located on the underside of each engine inlet duct are extended together with the landing gear. The cockpit canopy provides a superb in-flight view appropriate for air-to-air operations.

The F-5E is armed with two 20-mm M39-A3 cannons with 280 rounds per each cannon. The cannons are located in the nose section, forward of the cockpit. Special deflectors are used to avoid compressor stall conditions caused by hot gas ingestion as a bi-product of operating the M-39-A3. Each cannon is capable of firing at a rate of 1500 to 1700 rounds per minute.

Five hard points (one centerline pylon and four underwing pylons) allow the aircraft to carry different types of air-to-ground weapons (bombs, cluster munitions, and rockets) 6,400 pounds (about 3000 kg) in total. In addition, illumination ammunition and cargo containers can be attached. To increase flight duration and range, external fuel tanks can be attached to three hard points (a centerline pylon and two inboard pylons). Maneuverability and speed can be maximized in combat by jettisoning all external stores.

I know what my next purchase is, Aww yeah!!

It's one of my faves just on looks, the fact that Nasa use it as well makes me like it more.

strawberry float!!!! I just remembered a game that was always heralded to be the best combat flight sim but all it became was vapourware.

Did you ever hear about Fighter Ops?

I remember people had to pay to get news about the development! (I think they were starting with the T-5)

Edit: it was actually the T38 Supersonic Trainer 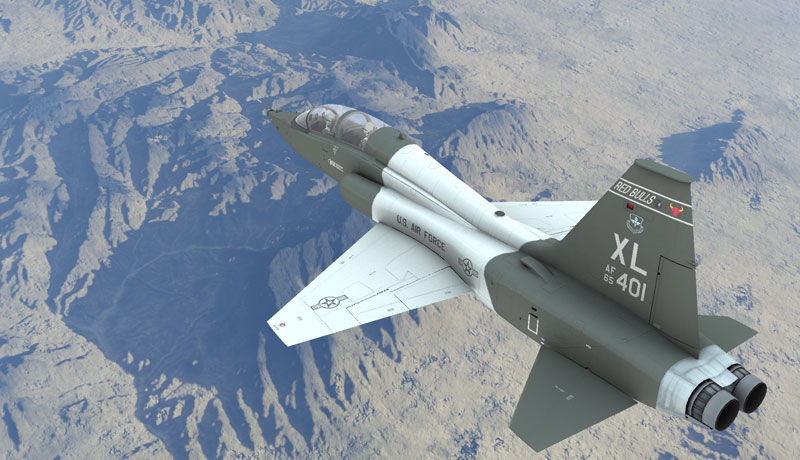 oh well at least we have DCS

We don’t have them often now, but this weekend we are having a Flash Sale on most DCS World modules. Take advantage of this big sale while it lasts.
DCS: L-39 Albatros – 50% off
DCS: NEVDA Test and Training Range map – 20% off
DCS: SA342 Gazelle – 10% off
Most of other released DCS World modules – 40% off

The big one here is that the L39 is half price. This is the perfect aircraft if you want to learn about flight sims in general as it has cooperative multiplayer


I'd be more than happy to help people out with learning.

Two seat Jet trainer aircraft L-39C is intended for basic and advanced pilot training in visual and instrument flight rules weather conditions, day and night and also for combat use against air and ground targets.
Its development started in the middle 60s of the last century by the Czech “Aero Vodochody”. In the 70s the aircraft has entered service and is still in the operational use in over 30 countries worldwide.

The DCS L-39C is the most accurate computer simulation of this aircraft among flight simulators available for PC.
The aircraft systems, engine and weapons have been simulated in full. The professional flight model has been developed. All the real procedures are possible in two interactive cockpits. Highly detailed and accurate model of the aircraft will make you feel the unforgettable sense of flying the famous “flying school desk”, which opened the way to the sky to thousands of air forces pilots worldwide.

This evening I have done something remarkable. Managed to stay connected to the tanker for more than 30secs, and got the glorious message " Transfer Complete"

Haven't managed that since I got the game.... more than 5 years ago

Progress seems so slow with DCS, but looking at what they have achieved with their engine overhaul is pretty sweet!

Another good few months have gone by with little in the way of updates... until now.

the level of detail they are putting in to the new terrain engine is unreal - I think there is going to be a big focus on combined arms in the future, expect on the ground tank battles!

Eagle Dynamics SA senior producer, Matt Wagner, states, “We are happy to announce the cooperation between Eagle Dynamics SA and Thrustmaster® to create the ultimate F/A-18C Hornet simulation experience”. “After the success of our first collaboration with Eagle Dynamic SA on DCS: A-10C Warthog, that lead to the HOTAS Warthog, we are proud to start a new collaboration on the DCS: F/A-18C Hornet”, says Gilles Raulet, Thrustmaster Development Director.

it has been far too long

The Hype is getting real! The first flight sim I ever got into was about the FA18. Such a cool plane. I could draw the cockpit in my sleep.

I am getting hyped over a stick