No, it's making all the workers & black people just vanish.

Why are all the working class people magically disappeared in the Conservative future and robots are only seen interacting with management? Strange.

In other news, the government has put out a tending to build a new generation of biological waste incinerators. 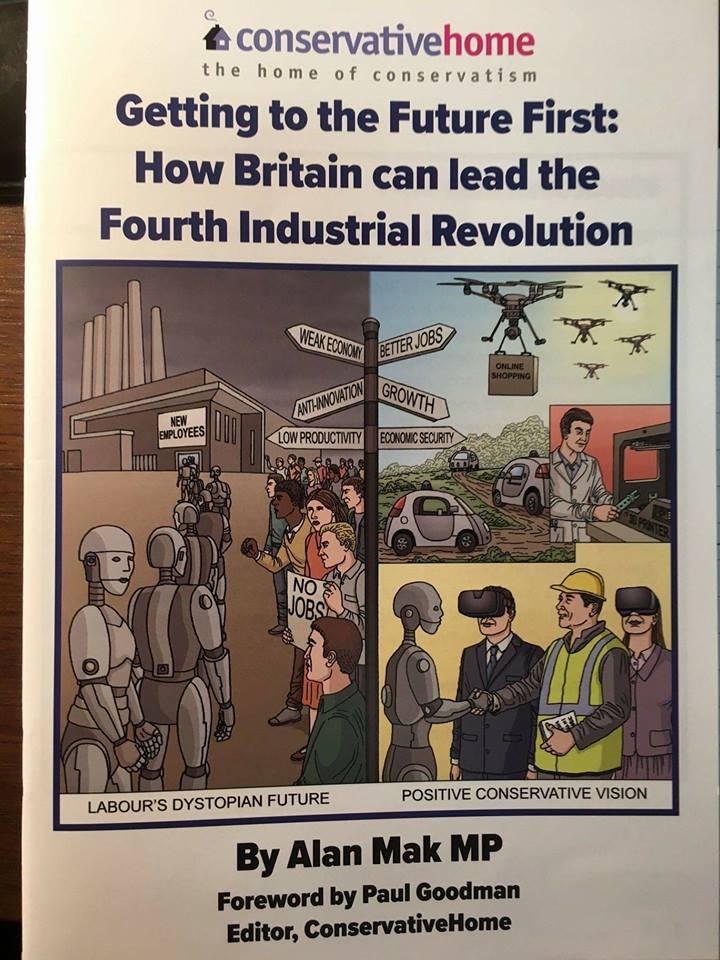 That’s my local MP. What an absolute load of gooseberry fool.

Toys R Us caught a lucky break the other day, but one more big name is struggling:

Yet another major credit insurer has abandoned geek emporium Maplin Electronics. Euler Hermes – the biggest trade indemnifier in the tech sector – has entirely removed all lines of coverage, El Reg can reveal.

The decision, enacted on Friday, will come as a fresh blow to private equity-owned Maplin, potentially heaping pressure on cashflow as some suppliers refuse to deal on anything other than a cash only basis.

Numerous sources across Blighty's local supply chain confirmed that Euler, which reduced Maplin's credit insurance limits in October as exclusively revealed by The Register, had wielded the axe again.

"We had a cut in October which we could live with. Now it is zero," said one trader, who claimed his firm would no longer supply Maplin. "If they paid upfront we would deal with them, but they won't do that."

Maplin, bought by Rutland Partners for £85m in 2014 (the third consecutive private-equity buyer of the business), previously turned the screws on suppliers, demanding higher rebates to help fund digital and physical stories improvements. It also asked for 120-day payment terms.

Sources close to the credit insurers told us high street retailers with a "high cost base and low margin" business were viewed as high-risk bets that are under constant threat from online rivals including Amazon.

Maplin has 211 stores in the UK from Aberdeen to York (according to its Store Finder tool), employing 2,599 people across the group.

Only been in one once and I thought it was quite a weird, random tech shop. Like you’d have PlayStation controllers but not PlayStations. And a couple of guitars. And then some batteries next to replacement TV remotes. And then a disco light machine. Oh, and an amp by a window...I left thinking ‘What kind of weird strawberry floating tech shop is this...’

Maplin was always good for cables, and was great for people looking to get into amateur electronics to pick up random pieces.

Kind of unfortunate in that techies are the most likely to buy online.

Like an episode of Black Mirror or something. What's going on?

Cutting plastic pollution is the focus of a series of proposals being considered by the UK environment secretary, Michael Gove, who has said he was “haunted” by images of the damage done to the world’s oceans shown in David Attenborough’s Blue Planet II TV series.

The government is due to announce a 25-year plan to improve the UK’s environmental record in the new year. Gove is understood to be planning to introduce refundable deposits on plastic drinks bottles, alongside other measures.

The environment secretary is also understood to be considering a proposal to encourage retailers to use fewer types of plastic, as well as another to move councils towards a standardised recycling policy.

The current patchwork of regimes means many types of plastic are not collected from households, depending on where in the country those households are. Together, the two measures will seek to ensure that a greater proportion of the packaging used in the UK can be recycled.

Gove wants an improvement in the rate of recycling, which has reportedly been slipping recently.

“The secretary of state wants to make recycling as easy as possible for households. That is why we will look to accelerate making local authority recycling schemes as consistent as possible through the resources and waste strategy,” a spokeswoman for the Department for Environment, Food and Rural Affairs said.

The department indicated Gove was planning to overhaul the system of recycling targets to focus more on environmental impact than on the weight of material collected. And the drinks bottle deposit scheme would form part of an expected attack on single-use plastics, such as straws and coffee cups, which will seek to reduce the overall amount of plastic being used.

The news came as a coalition of animal welfare and environmental charities warned that more than 100,000 tonnes of plastic packaging would be thrown away and not recycled this Christmas.

The charities, which include Friends of the Earth, the RSPCA, the National Trust and the Wildlife Trusts, estimated that the UK would use 300,000 tonnes of card packaging.

According to the Times, he is planning to shift the focus of recycling targets towards materials such as plastic and aluminium by moving away from the weight-based measurements favoured by the EU.

Those have led to some councils showing more willingness to collect heavier – though not necessarily as environmentally damaging – materials, such as grass clippings. Gove reportedly hopes that, by shifting the focus on to environmental impact, he can convince councils to concentrate on collecting the other materials.

Moreover, he plans to encourage councils to standardise what they do and do not collect from households, to end the regional disparities across the UK that are believed to be caused by differing contracts between local authorities and waste firms.

The environmental campaign group Greenpeace welcomed the proposals, which are due to be formally set out next year. Its spokeswoman, Louise Edge, said: “It’s a good sign that Michael Gove is thinking about a multi-pronged approach which includes cutting disposable plastic at the source while also making it easier for people to collect and reuse it.”

More generally, compared to other parts of Europe our streets are very littered (compared to graffitied).

Our streets are very littered because there are no strawberry floating bins anywhere anymore.

I could believe it.

I find it always tends to fit into 2 categories: beer/energy drink cans and takeaway food.

But then I don’t have this problem because I don’t walk down the street swigging Stella out of a can like a tramp.

Lastpostamorph wrote:Our streets are very littered because there are no strawberry floating bins anywhere anymore.

Except this is not true, in my experience. I regularly see rubbish lying just meters away from a bin. Litter is mainly due to the lazy scum who drop stuff at their feet like animals. It's a moral failing. If I ever dropped an empty packet in public as a child I would have been in serious trouble, it was made perfectly clear to me from a young age that this behaviour was simply unacceptable.

Generally in any urban centre area there is a bin at least every 50m or so. Keeping stuff on you until you happen to pass one is not too much to ask.

I think we should give the councils the right to set rabid dogs on litterers.

Lastpostamorph wrote:Our streets are very littered because there are no strawberry floating bins anywhere anymore.

Except this is not true, in my experience. I regularly see rubbish lying just meters away from a bin. Litter is mainly due to the lazy scum who drop stuff at their feet like animals. It's a moral failing. If I ever dropped an empty packet in public as a child I would have been in serious trouble, it was made perfectly clear to me from a young age that this behaviour was simply unacceptable.

Generally in any urban centre area there is a bin at least every 50m or so. Keeping stuff on you until you happen to pass one is not too much to ask.

I suppose it depends where you are.
I was in Glasgow Central Station on Thursday night, not a single bin anywhere in the place.


I also love watching Smokers desperately try to claim that dropping a cigarette butt on the ground and stamping on it isn't littering.

Train stations don't have bins because of terrorism.

British train stations generally look like a bomb has gone off in them already.

In London the public bins are often overflowing.

May’s kicking off the new year with another U-turn - The decision to overturn the fox hunting ban has gone to the dogs. They watched Blue Planet and now they’re all in about the environment, man. Peace and love, peace and love.

DM commenters must be the most miserable bastards on the planet.

Users browsing this forum: No registered users and 31 guests