Dowbocop wrote:My dad had a pretty bad leak somewhere in his heating/water system which made a part of his front room ceiling collapse. The council have fixed the leak but apparently the hole is his problem! He's waiting for it to finish drying out and then he thinks he'll just whack a bit of board or whatever up there and be done with it (he's not arsed about matching the textured wallpaper from when we moved here in 1988 that I'm not even sure is a thing anymore

). I was wondering if anyone had any insights on how much it would cost to get it fixed by a professional (the hole is 0.5sqm approximately).

If he was to do it himself I'd try and help him if I was about (he lives in London, I'm in Liverpool). My plan would be:
- straighten edges
- measure straight hole
- cut board
- nail into beams
- plaster, sand, paint

Does that sound about right or have I missed something? 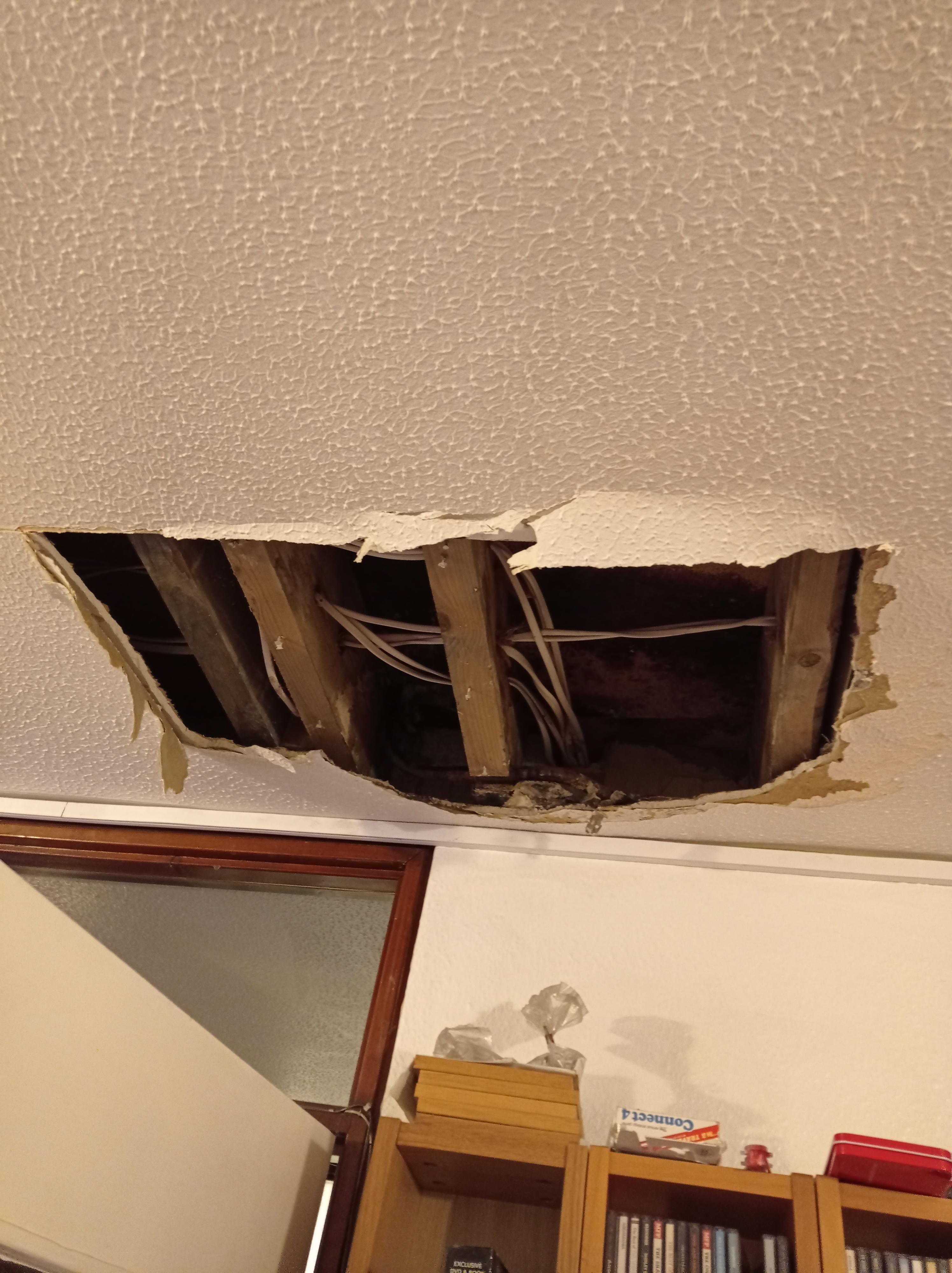 Yeah it's a fairly straightforward. You'll need to make the hole bigger first so you're on the next joist as it looks like there's nothing to fix to on the left side? Use some pencil lines outside the hole on the good ceiling to mark where your ceiling joists are so you don't fire a scree into thin air and hit a cable or pipe. You could use a stipple/textured finish paint to patch the area once finished if your old man is not that bothered about matching up exactly. Would be easier than trying to wallpaper upside down.

My local DIY shop sells plasterboard offcuts very cheap which would be perfect for this. Try somewhere like that before going to b&q.

In terms of getting someone in its likely to be a few hundred quid. The issue you'll have is actually finding someone who's got availability because good tradespeople are all booked up atm. I would seriously suggest it's not worth the aggro and do it yourself.

EDIT: Just thinking as well - it's definitely textured wallpaper and not an applied finish? Be careful it's not Artex which is likely to contain Asbestos.

by Green Gecko
Yeah use plasterboard.

You can tap with a hammer and listen to try and find the studs. Dull thud stud, echoic sound nothing.

You could use a stud finder to detect nails (good, means there's a stud) and wires/pipes (obviously bad).

It isnt wallpaper but artex type paint that is sculpted / stippled with a brush. Pre 1970s artex contained asbestos, post they changed the formula and you can still buy it but it's super expensive. And horrible anyway.

You could probably approximate it with swirls of quick mix plaster or even filler.

Edit: actually looks like it is texture paper going by the way it's torn. No problem then.
All times are UTC+01:00
Page 21 of 21
Powered by phpBB® Forum Software © phpBB Limited
https://www.phpbb.com/