Anything to do with games at all.
Post Reply
23 posts

Due out on PC, PS4, XB.
It's a UE4 game so maybe a Switch announcement will come at a later date.

I'll be pants at this but I'm actually hyped for it now that I know it isn't another 3D DB fighter.

It does look cool as strawberry float.
Loved the Budokai games on my PS2 but never played xenoverse.

Looking forward to this

Day 1 for me, it looks amazing, been following it for a while now. My only worry, and I have not played it to confirm, is a lot of the characters do look to have very similar move sets. I really hope I am wrong about it, because man it is gorgeous, and it would be a shame if there was little variety. Also despite loving the look I have never been able to get into the Arcsystem fighters

Zartan wrote:Day 1 for me, it looks amazing, been following it for a while now. My only worry, and I have not played it to confirm, is a lot of the characters do look to have very similar move sets. I really hope I am wrong about it, because man it is gorgeous, and it would be a shame if there was little variety. Also despite loving the look I have never been able to get into the Arcsystem fighters

Dig Dug wrote:My only concern with DBFZ is reports that the movelist will be limited entirely to stuff like quarter circle motions (like a hadoken or tatsumaki) and lacks stuff like the Z motion (Shoryuken and other DP moves) and 360 degree motion (most command grabs).
It makes me worry that the game will lack playstyle variety and will become stale quickly. Then again smash bros for wii u manages to circumvent both of those problems to a degree (or did before Cloud and Bayonetta were released as DLC) and every character is controlled the exact same way. 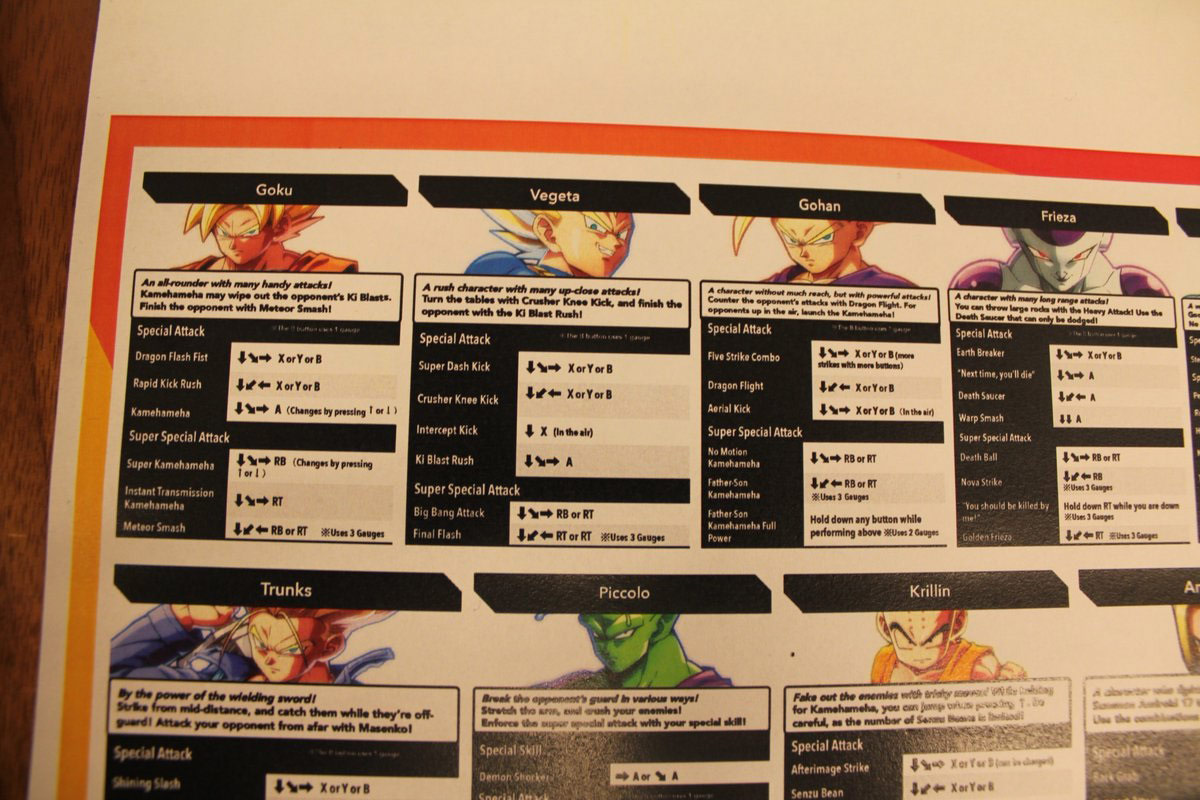 All that said though I'm happy with the look of the game and the fact that the character roster is being picked based on what characters will be interesting to play as (as opposed to which characters are the "strongest" or "most important"). A lot of people seem to be unhappy that Captain Ginyu, Nappa and Android 16 are playable characters but if anything having those characters shows a level of respect to the source material and players (who doesn't want to troll people with self destruct and body swap?).

Whilst there's some variation even in that pic, I do hope other characters have move inputs which are wholly different to what we see in the pic.

I would say it is less about the special moves, you look at the normal combos, a lot look very similar. I think the problem is all the Saiyan characters are just going to naturally be similar, which is a large part of the cast. Even Max mentions it in his reaction video to Nappa, he has been nothing but positive about the game, but you can see he is disappointed that Nappa moves the same to everyone else. I have to say Android 16 is the one character I have locked in to play so far.

Also IGN should be showing off another 2 characters next week, they are really pumping these out now

Doesn't look as good as Xenoverse but might be enjoyable enough at least.

You're right, this looks better.

There's a positive preview of this up on Eurogamer with some interesting things explained about the game...

Dragon Ball FighterZ does away with all this with a simple, universal input command system that makes pulling off special moves a breeze. There are no 360 motions in Dragon Ball FighterZ. There are no two quarter circle motions. You don't even have to press two buttons for super attacks. All you need is to master the down, forward and a button, and the down, back and a button input commands, and, for some characters, down, down and a button. That's it. Three input commands cover all of the game's special and super moves across all of the characters.

Lagamorph wrote:Doesn't look as good as Xenoverse but might be enjoyable enough at least.

This game is one of the best 'looking' video games I've seen.

Anyone else getting this on PC? Myself and Pedz have it preordered. I'm a dummy when it comes to DB asides from the obvious stuff but this looks so rad, they do such a terrific job replicating their 2D style in 3D

Tempted to get this.

Used to rinse Budokai 1&2 non-stop on my PS2 back in the day.

EDIT:Just realised this is almost identical to the post I made back in October.

Having a lot of fun with this, actually didn't realise it was a Capcom vs style fighter, w/tag team mechanics and fast combo driven gameplay. That's not my jam as much as the slower Street Fighter approach but it seems to fit the license well and the spectacle is certainly a delight.

Not usually fussed on story modes in fighters but I'm enjoying this one, I'd recommend starting there as it eases you in with tutorials quite nicely. Plus the character interactions are charmingly light hearted and have made me laugh a few times.

I am so bad at this game, but it is still a blast to play. Eventually I will win a match. Someday. ... maybe.

The DBZF World Tour finals are going on this weekend in Paris. Ultra Instinct Goku has already been revealed as a new playable character prior to this event but more announcements are planned.

Many are expecting a new season of characters to be revealed with UI Goku being the first character. I got this on Switch last year and played it a bit but really want to put more time into it and grab the DLC packs and also git gud.

Never bothered with online, but, did really enjoy this. Didn't finish it though was very close and was planning on going back and then Kakarot became a thing so left it. Will finish it off after I play through Wind Waker HD.

It's a ridiculously good game, I've not got all seasons but will hopefully grab them when cheap. Also if they release a complete edition on switch with all seasons on there then I'll double dip.

Season 3 pass announced, 5 characters, first being Kefla with UI Goku as the second

Users browsing this forum: No registered users and 68 guests