Anything to do with games at all.
Post Reply
188 posts

The World Tree was beautiful in the trailer, I wonder if you can interact with it or it's a climbable structure. Glad the game is coming to PS4 still.

It was hard to get a sense of George RR Martin's involvement from the trailer, whether there's a more obvious strong plot & player motivation than the typical Souls games, I expected more dialogue & perhaps traditional RPG "quests" each with a storyline. All unknown at the moment.

Hopefully the game mechanics are less obtuse than previous games, one shouldn't need to read a Wiki to figure out basic things. Also if it's open-world and much bigger than their previous titles, does that imply it might have a map or waymarkers? Personally I don't think a map which auto-fills as you explore would be a detriment to the series, works well in games like Hollow Knight or Code Vein without immediately handing you every location.

Stuart wrote:It was hard to get a sense of George RR Martin's involvement from the trailer, whether there's a more obvious strong plot & player motivation than the typical Souls games, I expected more dialogue & perhaps traditional RPG "quests" each with a storyline. All unknown at the moment.

George RR Martin has written the "mythos" of the game.

Instead of creating Elden Ring’s main story, Martin wrote about a time long before the era the player actually explores. Miyazaki gave two reasons for why he wanted Martin to write Elden Ring’s mythology, rather than the main story.

“Storytelling in video games – at least the way we do it at FromSoftware – comes with a lot of restrictions for the writer. I didn’t think it was a good idea to have Martin write within those restrictions. By having him write about a time the player isn’t directly involved in, he is free to unleash his creativity in the way he likes. Furthermore, as FromSoftware we didn’t want to create a more linear and storydriven experience for Elden Ring. Both issues could be solved by having Martin write about the world’s history instead.”

Sounds like the best way to use him really 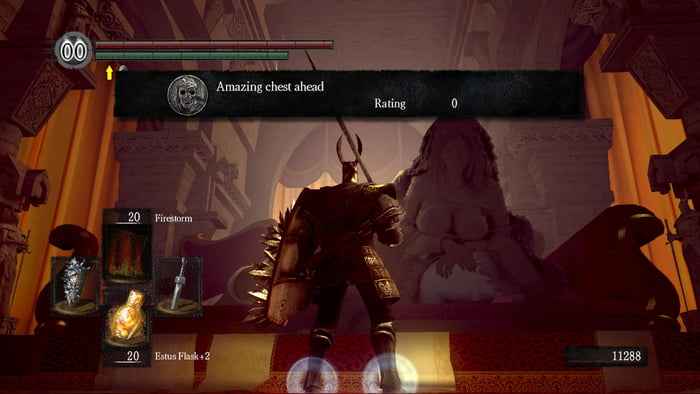 If they let George write the plot and dialogue, alongside building the world it’ll be a 7 part game before you know it.

This does interest me a little though, purely for George’s involvement more than the Souls genre as he really does know how to build a fleshed out world that will probably feel very real. Probably not something I’d get at launch but definitely when it goes on sale.

Let's just hope he wrote an ending for this one.

I like the approach to how they present the lore interwoven within its world. My only gripe is when they make the player go through needlessly tedious actions to get certain points with side quest. It was novel at first but seeing the use it for more important parts of the game just gets annoying. Already expecting them to go crazy with it in Elden Ring lol. Since their games are usually designed to be replayed it's gonna be interesting to see how they create an open world to account for that.

Yeah, the sidequests were somewhat out there in the early Souls games, but you could still get through them without a guide if you paid attention or got lucky in places. By the time you hit Darks Souls 3 and Sekiro they're taking the piss.

From the start of the new Elden Ring gameplay trailer, it was clear that FromSoftware wanted to convey a sense of scale. From the expansive vistas to even just the existence of a giant goat players need to ride across the map, Elden Ring is bigger than any Soulsborne game before it. In an interview with director Hidetaka Miyazaki, the legendary game developer made clear that this is intentional, and could set the stage for one of the most freeform games yet from the Dark Souls team.

After an agonizing two years of waiting, the long-awaited collaboration between director Hidetaka Miyazaki and author George R.R. Martin has been re-revealed. IGN was able to sit down with Miyazaki for an extensive deep dive into Elden Ring. One of the things we learned is how the sense of scale shown in the trailer wasn’t just for cinematic effect, but a core pillar of Elden Ring’s design.

Throughout our interview, Miyazaki talked about Elden Ring’s setting, The Lands Between, and the importance of having massive worlds players can freely explore.

“The Lands Between is actually a name that was invented by George R.R. Martin himself when he was coming up for the impetus for this world and writing its history and its deep mythos,” says Miyazaki. “And we hope that as well as taking away the idea of it being the sort of impetus and the starting place for the world, we want people to feel that it’s really like an invitation to this mysterious new land.”

FromSoft games often feature complex, almost labyrinthine designs where, as players progress, seemingly distinct map locations connect with one another through shortcuts and new paths. This wasn’t always the case though – Demon’s Souls, for example, features five unique worlds. Each world has three unique stages that connect to each other seamlessly, but the worlds themselves don’t intersect.

This changed in Dark Souls and Bloodborne where the entire map essentially functioned as a whole, save for a handful of different zones and dimensions. Elden Ring seems to take both of these concepts and expand them to a scale unseen in past FromSoft games.

The Lands Between is made up of six major areas, each of which is the domain of a major demigod character. Miyazaki says that it will be apparent there is an “order” to how players can tackle these six areas, but you don’t have to follow it.

Miyazaki broke it down further, explaining that each of the six areas will “house its own mainline dungeon map,” which seamlessly connects to the Lands Between. There’s even a “hub” – not unlike Dark Souls' Firelink Shrine – which players can branch out from that can be accessed a little later in the game.

The more Miyazaki explains the world of Elden Ring, the bigger it feels. Beyond the main dungeons of the six domains, there are also “a wide variety of catacombs and castles and fortresses which are interspersed throughout the map.”

While there are certainly overworlds that come to mind when hearing Miyazaki explain the map layout of Elden Ring (*cough* Breath of the Wild *cough*) this expansive design signals particularly exciting possibilities.

As I said previously, a Dark Souls game can sometimes feel like a labyrinth, and this does have drawbacks. There are some areas that feel like they exist only to bridge together disparate areas, and there are times the map design can feel unnatural and artificial as a result.

But separating the world into six major domains that function as their own dungeons, while also creating a larger, explorable world with off-the-beaten-path mini-dungeons, Elden Ring could feel like a truly open-world that still keeps the level of map craftsmanship FromSoftware is known for.

The spirit stuff sounds similar to Nioh 2 yokais which immediately perked me up. Hoping this spices up the combat since it's the main area I'm personally concerned about with this game.

Miyazaki has said summons and stealth will make for an easier experience, but there will be no difficulty settings.

Dark Souls has always had stealth to be fair, always amazes me how many people don't take advantage of this

(I'd love to see it expanded in this mind)

Stealth doesn't help with bosses, which are the main sticking point for people. Optional summons are a good way to manage difficulty, a bit like Code Vein, assuming the summons aren't extremely difficult to obtain or too limited.

Saw in the other post the game has a world map but no dungeon maps, still think this is a shame there's no auto-generating map as you explore.