Anything to do with games at all.
Post Reply
180 posts

Nothing specific at the moment, although I have an idea for a spiritual revisit to Link's Awakening that it would work for. I do not have the skill for that, but I can dream 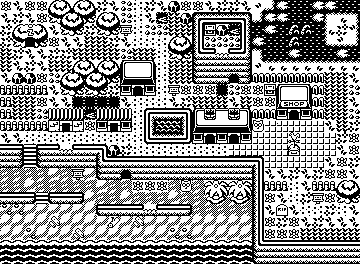 The swamp was interesting because the inverse palette means that the white of the objects pushes out/bleeds into the surrounding black background, rather than the other way round as across most of the other tiles. That made it harder to get a feeling for small detail and I think makes rounding the edges of objects harder too.

Good start today. Opened up inky to find more than two thirds of my recent game has completely disappeared. Gone. The scene files are still there, they're just empty. I have no idea why. There was no crashes, and I save regularly. All I have left is the intro and, thankfully, all the functions I wrote for determining gender pronouns.

Motivation is already an issue for me on these projects, and now I just want to strawberry floating give up.

That sounds upsetting to say the least. Make sure to take regular backups so it hopefully isn't a problem you ever face again. When I'm coding I try to version control anything substantial in git.

OrangeRKN wrote:That sounds upsetting to say the least. Make sure to take regular backups so it hopefully isn't a problem you ever face again. When I'm coding I try to version control anything substantial in git.

The problem with inky is that it saves in a way I didn't really understand. Like other engines like Twine each new project is saved as a single file. Unlike twine however, when you instruct it to create new scenes in-engine through its language, it physically creates new text files that it saves to the same directory the .ink file was created in. I was working straight out of my docs folder and so suddenly things became very messy. However, I didn't touch anything, and now those text files have disappeared for a no apparent reason. Likely it was my fault somehow, but still.

I've now moved everything into a separate folder, obviously.

However this means the game is essentially a write-off. So much of what I'd written was intertwined with what I'm left with that I have to either completely rewrite what I have, or try and remember what was there and stitch it back in. I don't have the motivation to do either at the moment.

I started working on my game. Got it working pretty well although have a bit of problem aiming at the zombies going to add a cross-hair and am working on menu screens and stuff. 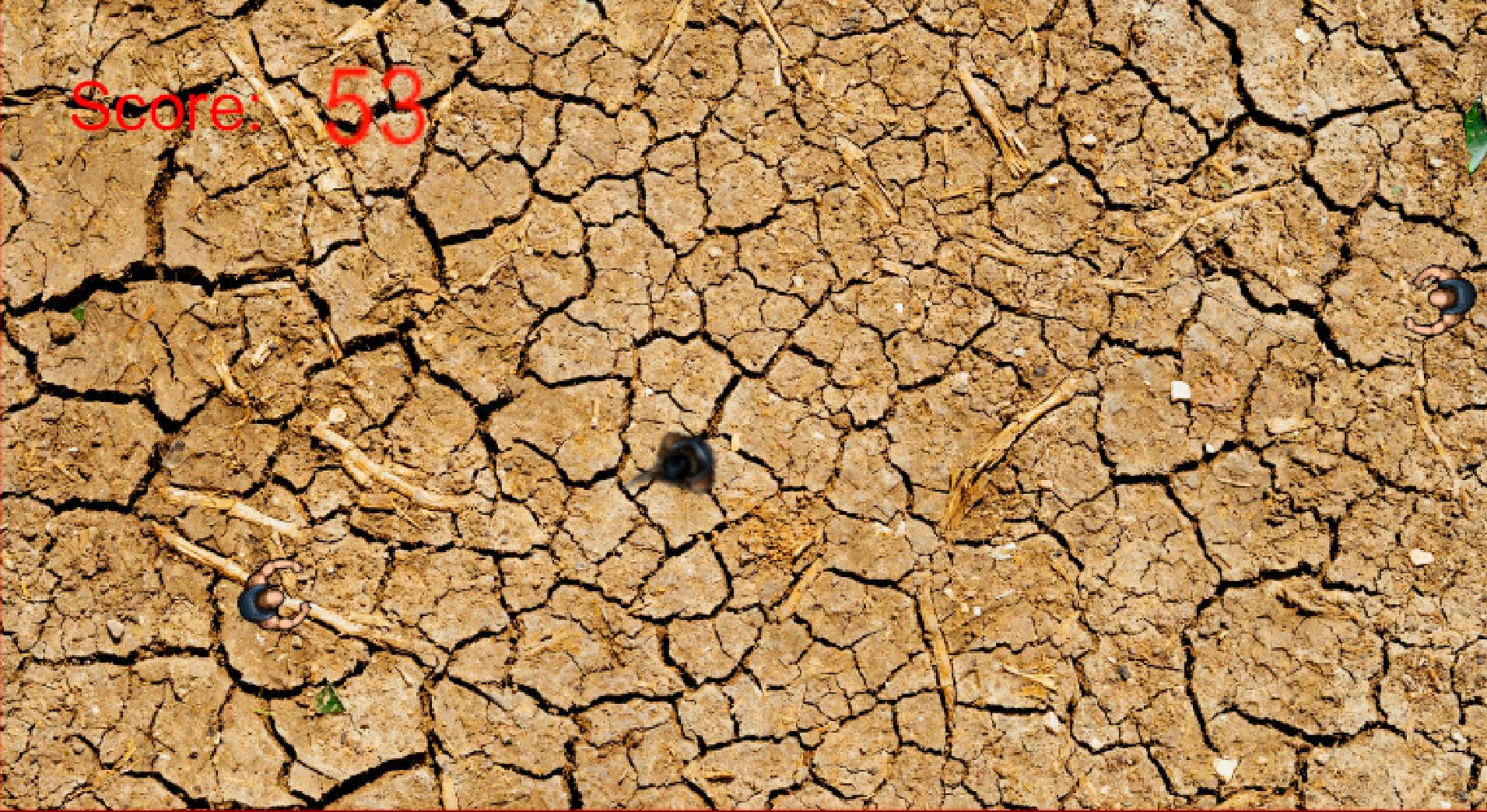 Sounds like you're getting along nicely. I'm guessing that's still a lot of placeholder art, but that background makes reading the score and seeing the characters and other elements a bit difficult!

OrangeRKN wrote:Sounds like you're getting along nicely. I'm guessing that's still a lot of placeholder art, but that background makes reading the score and seeing the characters and other elements a bit difficult!

I'm kind of treating this as a learning experience more than full development cycle so I'll probably just iron out a few more of the kinks and then move on to something better.

I've decided on my week off to start mucking about with an old Gamemaker Studio project I had going on in 2014. The graphics are absolutely terrible placeholders, because I have no artistic skill with pixel art whatsoever, and it plays pretty well so far. 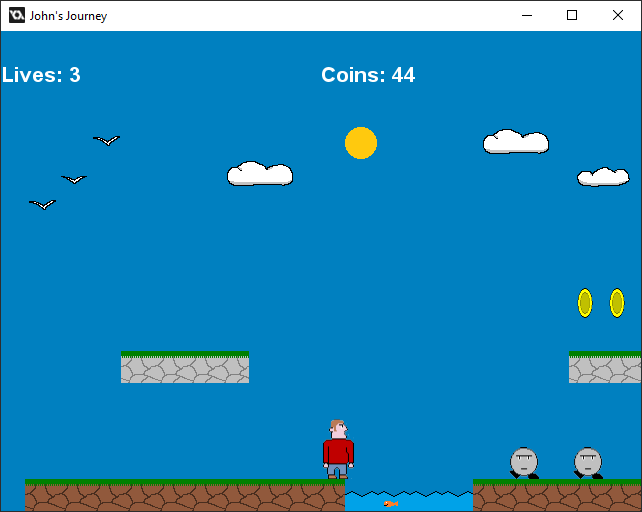 It's a platform game about raising money on a walk from Lands End to John O'Groats, while overcoming creatures representing self-doubt. I'm planning on 20 levels (have 6 made so far). It also gives slightly sarcastic messages when you die.

I think I've finished with my prototype, at least for the time being.

I've added an aim thing. It works off the x axis of a mouse but the direction of the moment will invert when you're facing down the screen.

There are ton of stuff I'd like to add such as a top score list, power ups, bonus cops to save and have another go at the control system. Anyway if you want to have a go at the game you can play it at the following link.

Hey guys. I grabbed RPG Maker and thought I may try to make a crappy little RPG. Thing is I was wondering about music. Any of you know of any good and free music programs to make some chiptunes? I ain't no musician, but it'd be fun to try something.

Pedz wrote:Hey guys. I grabbed RPG Maker and thought I may try to make a crappy little RPG. Thing is I was wondering about music. Any of you know of any good and free music programs to make some chiptunes? I ain't no musician, but it'd be fun to try something.

I think this is meant to be pretty easy to use:

You can also just try and find free stuff online by searching sound cloud or somewhere like bensound:

I made a rhythm game called RHTHYMURL. It'll start straight away, you'll need to hit refresh if you want to start again, and please don't hit the back button

You'll also need to play it with a keyboard and on a browser that lets you see the address bar, so mobile is out I'm afraid!

I just hit 1045 as my best score yet. I'm sure someone here can beat that - I'm not very good at rhythm games, even if I made it! It only takes 2 minutes to play so hopefully some of you can give it a go and let me know what you think

Following on from the rhythm game in the address bar above I tried to make something a bit more involved, and I ended up writing URIMA - or "UNDERCOVER RECONNAISSANCE INFILTRATION METAL ANCHOR", obviously. "URI" and "anchor" are both references to the address bar novelty, and yes it's part Metal Gear inspired too! Gameplay is closer to a 1D Lode Runner/Mappy hybrid, if that's a comparison that makes sense.

As tweeted it's a stealth-puzzle game where I wanted to make creating and sharing levels as easy and accessible as possible. The game state is entirely contained within the fragment identifier at the end of the URL itself, which means you can share levels just by sharing a link, undo mistakes by hitting the back button, and save levels with bookmarks. I found it pretty fun being able to leverage all the built-in functionality of browsers but re-contextualised.

Would love it if anyone wants to try out the 10 levels I wrote and let me know what they think. 0-6 hopefully introduce the mechanics and ramp up the difficulty with a natural progression, although the only person to playtest it other than me is my girlfriend so I'm sure it's far from perfectly refined! There are then 3 bonus levels which rely on some more nuanced mechanics and are a bit more novelty-like in design. I think Bonus B might be the hardest.

I would also super like it if anyone wants to have a go at creating a level and sharing it here! I'd love to add some "guest" level links to the page even (obviously with credit).

Cool game OR, pretty hard! I like how the mechanics are very simple but build up into quite complex puzzles.

Thanks Karl! I was actually surprised myself by how easily non-trivial puzzles can be created from what are very simple rules. I thought that was going to be the biggest issue of working in a 1D space.

Difficulty is so hard to judge when I created the levels myself, the value of playtesting by others is very apparent.

EDIT: And having now played it, it's a great execution on the concept. That's...strawberry floating amazing Orange.

EDIT: There's no way I'm not flagging this to the RPS Free Play person. Unfortunately, the site seems to be down at the moment so...I don't actually know who that is.

Did you ever get back on with any of your twine/inky projects, or has life been too busy?