Anything to do with games at all.
Post Reply
86 posts

The problem with most Rockstar games is that they're like Lego sets that you are forced to follow instructions.

Should have shifted the attention into doing things your way. Be creative in tackling the missions.

Set during the 1980’s and it needs to be fun to play with iconic characters.

I want an epic start to finish adventure like the witcher 3.

1970's Manchester. Or maybe 70's through to the 90's with a non linear story that lets you change between characters in the different eras.

This past week I've been working on a map for a GTA version of south Florida. I ain't got no names for anything, except obviously Vice City being down on the south east, but I like concepting stuff, so I thought I'd concept such a map. 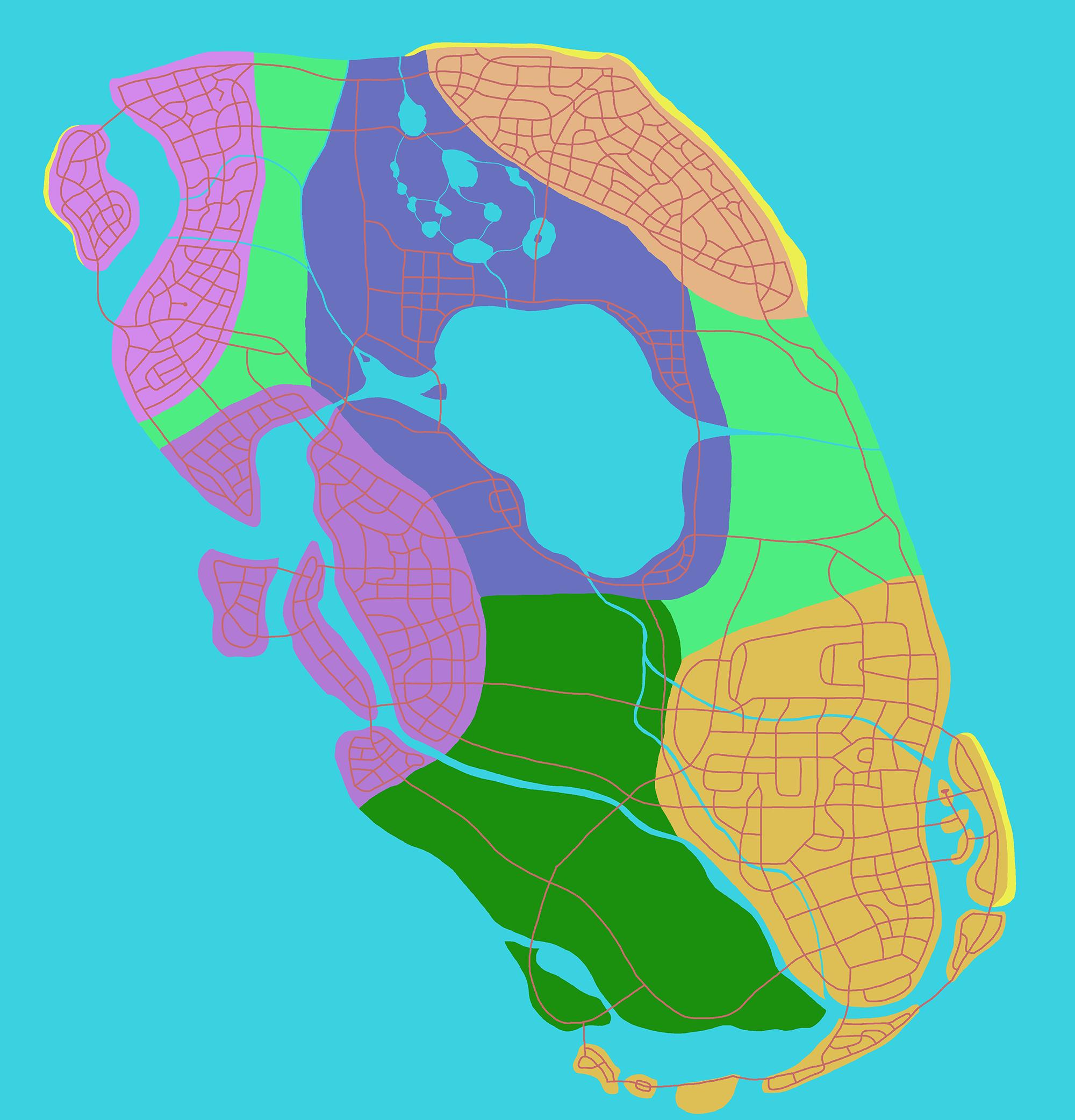 Featuring Vice City in the south-east, the Tampa Bay region north-west, the St. Lucie county north-east, and the Lee County west. Covering most of the northern region of the map is Lake Okeechobee and the Kissimmee Chain of Lakes, which I dub the Lake Region. Covering most of the southern region of the map is the Everglades and other National Preserves, which I dub the Tropical Region.

I haven't really named any of the places on the map, but I have a few features of Vice City pinned down. As I say, it was mostly about concepting a map of the state, which I see as being as large as or maybe slightly larger than the map of GTA V.

Print it off, take a grainy photo and repost it on resetera

Then let the wolves jump on it. As fun as that would be, I don't think I'd be able to make it look like it was a 'leak'.

I could apply to a position at Rockstar with it, though. Right?

Godzilla wrote:Not really enjoyed them since 3 and vice city. I always feel that Saints Row does it better, more fun, actual gameplay and not an interactive movie like later GTA games or RDR2.

An over the top 80s game set in US or UK would be great. Or a 90s euro trash inspired game set in Germany would be epic.

This is the same for me sod the next GTA give me another saints row and keep it crazy...

Sick of the perpetual fetishization of the 80s. A 60s/70s themed Southern Florida with Vice City would suit me.

Alvin Flummux wrote:Sick of the perpetual fetishization of the 80s. A 60s/70s themed Southern Florida with Vice City would suit me.

60/70s Florida would be pretty boring. If they went with 60s I'd prefer California, the hippy movement, end of the golden age of Hollywood and the Manson murders would be a great backdrop and aesthetic. I'm not sure what was going on in Flordia at that time.

The reason GTA Vice City worked so well is it took inspiration from the camp and excessive 80s Miami style portrayed in Miami Vice and Scarface and dialled it up to 11. These films and Vice City also captured the crime wave resulting from mass immigration from Cuba to Miami at that time. Alvin Flummux wrote:Sick of the perpetual fetishization of the 80s. A 60s/70s themed Southern Florida with Vice City would suit me.

As Nick says that would be a bit boring.

The 1980s were when cocaine hit Florida and everything went crazy.

I'm just trying to think of things that the series hasn't done yet, that's all. Areas left to be mocked mercilessly.

Are there any other cities that have had a major part of US movie history? They've already said they won't do another GTA outside of the US.

There's Detroit and Chicago, but they're too similar to New York so they'd just end up doing Liberty City again.

Kansas City? Create a state that's a mix of both Kansas and Missouri, with a recreation of the Mark Twain State Park as a more natural playground outside of the cities.

Maybe the northern area of Michigan with the areas around Routes 2 and 31, along with Beaver Island. Not sure how many films were set around that area, but it'd make for an interesting map design.

Oh, I'm feeling the need to be concepting another map again.

I was looking into Vice City a bit more, and... Rockstar used an actual state of America in their fictional universe? Is the wiki right on that? Vice City is in the state of Florida?

I also found some realistic map from about three years ago that puts all the known GTA US locations together, adds some connections and extras, and forms the whole of the US from it. I think that's about the largest size i could handle for a map, though I feel it does need more to fill it out a bit - especially in that large mass of water that could hold another city. Although there are five major cities already a part of the map, so I'm not sure how easy it would be to shove a sixth into it. A true version of North Yankton would be welcome, though.

Think of the possibilities of hobbies and pasttimes you'd be able to fit into a map that size. About three golf courses, maybe a racetrack or two, baseball could finally be added to the games [the bat's been a weapon in the games for long enough, why can't we play the actual sport?], multiple clubs with their own unique feel, a bowling alley... That would probably take away from the main story of such a game, but with a map that size, you'd be travelling the world anyway.

NickSCFC wrote:Are there any other cities that have had a major part of US movie history?

There's Detroit and Chicago, but they're too similar to New York so they'd just end up doing Liberty City again.

I've been thinking about this again, and the Grand Rapids of Michigan is the setting of a film called 30 Minutes or Less. That, along with House of the Rising Sun have stories relating to subjects GTA deals with. Those two, along with a few others that were filmed at the Grand Rapids, do say to me that you could make a pretty good recreation of Michigan just from the Grand Rapids and the surrounding area and have it be recognised by many.

It took me longer to get this one done, having concepted a lot more with how I wanted it to look, but I present to you all the GTA State of Michigan. 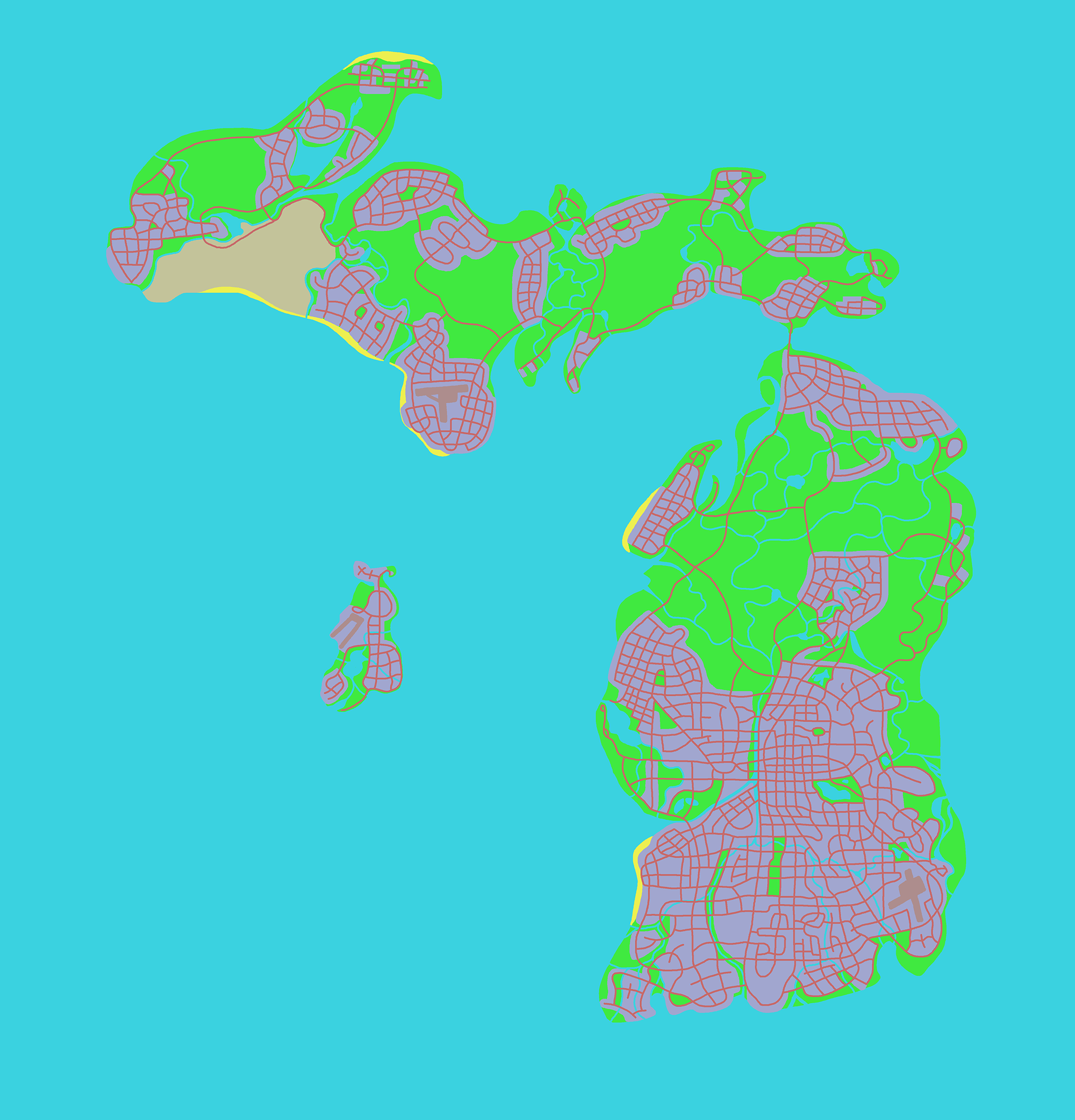 As you can see, I've gone for a more GTA V-styled map for this one, and it is not exactly to scale. Some roads within the towns are not included, or towns appear larger than they would just to make them more visible on the map. I also think I might have made the large city look larger than it should by packing more roads into small areas. That large area is a recreation of the Grand Rapids, with a bit of Ludington mixed in to the north-west of it. The Upper Peninsula's largest city is a recreation of Menominee.

Other areas of the Lower Peninsula include a town based on Traverse City, a town just off the tip of the Grand Rapids that doesn't have a base location but could be likened to Rockford or Cedar Springs, and right at the top a recreation of Mackinaw City. The Upper Peninsula is split into three sections, with the west having the large resort and a truncation of Copper Harbour, central having the city of Menominee, Marquette, and the town of Grand Marais, and the east having St. Ignace, Sault Ste. Marie, and truncations of De Tour Village and Manistique.

There's a massive amount of sea within the south-western part of the map, but only one small island filling out the area. There's opportunity to put more islands around that area, but I decided against it for now as they'd be smaller and not much detail would be able to be placed on them if any. I'd have four to the south, one to the north-east, and one to the west of the featured island.

I'd love to see them revisit GTA2's near future theme, they could basically do a pisstake of Cyberpunk 2077.