Anything to do with games at all.
Post Reply
2665 posts

So there's an updated called 'the yappening' which seems to be focused on the grunts from Halo.

Multiplayer has had a massive update - not only does the loading screen show the map, it shows what game type, score to win and player tags.

On top of this they've doubled the packet data to and from servers, they originally ran to compliment 30fps but now they run to take in the new 60fps standard.

We’ve upgraded the rate at which network packets are sent by the server in Halo 2, Halo 3, Halo 4, and Halo 2A. We have also increased limits on how much data each individual packet can contain. This includes data about the position of bipeds, where they’re aiming, what projectiles they’re firing, etc. The server prioritizes what data is contained in a packet until it reaches a maximum size. In gaps where the client hasn’t received a certain type of information from the server (due to latency or prioritization), the client predicts what this information should be based on the last data received. It then corrects its predictions upon receiving new data. This can result in cases of “rubber-banding” where a biped’s position is predicted locally and then corrected by the server. By increasing the allowed size of packets as well as their frequency, we have significantly reduced these gaps. This results in less prediction and correction due to more frequent and more complete updates from the server. In Halo 3, the clients would send 15 packets per second to the server, while the server would send 30 packets per second to all clients. Now both servers and clients will be networking at 60 packets per second, aligning with the framerate.

Photek wrote:So there's an updated called 'the yappening' which seems to be focused on the grunts from Halo.

They don't say it but does this actually mean all the games run in 60fps?

Photek wrote:So there's an updated called 'the yappening' which seems to be focused on the grunts from Halo.

They don't say it but does this actually mean all the games run in 60fps?

All the games have run at 60fps from day 1 afaik.

All MP runs in 60fps (for certain), that was from Day 1, problem was playing the f**king things at the start.

Reach has already been confirmed to be 4K/60fps on X1X.

ITSMILNER wrote:Since i’ve set up my XBO again I have gone to update this so I can play Halo 2........70+gb download

The MP Reach stuff will be a free update (so online community isn’t split) but Reach campaign will cost money. ODST was €5 so Reach campaign could be same price.

When’s last time you played this? It got 70gb update months ago, that fixed everything and bumped resolution to 4K on X1X.

ITSMILNER wrote:Since i’ve set up my XBO again I have gone to update this so I can play Halo 2........70+gb download

The MP Reach stuff will be a free update (so online community isn’t split) but Reach campaign will cost money. ODST was €5 so Reach campaign could be same price.

When’s last time you played this? It got 70gb update months ago, that fixed everything and bumped resolution to 4K on X1X.

Not played it for a couple years tbh, my XBO has not been used for ages either so the last day or so has been downloading updates.

To set expectations appropriately, we are going to be showing a small slice of a work in progress demo build of Reach running on PC. Our streaming setup isn't yet able to handle 4K hotness so it'll be an old school 1080p broadcast. We don't have a release date to share since it's all dependent on flighting and development (it's ready when it's ready). Max will also drop some new info on the progression system, we have updates on the specs for Reach matchmaking settings, and more...

I'm happy for PC users and all but eh, CAN WE HAVE SOME REACH for Xbox info please?

Reach had Firefight? anyway it's going to be on dedicated servers, they should also do this for ODST.

Halo: Reach and Halo: The Master Chief Collection on PC

While the majority of the team at 343 Industries is hard at work on the future and the next installment of Chief’s saga, our MCC team has been laser-focused on the storied legacy experiences of the past. If you haven’t been following along, Halo: The Master Chief Collection(MCC) on Xbox One has received dozens of updates over the past year adding new features and improvements in close partnership with the community via public flighting. With the foundation of these classics looking and playing better than ever, the team at 343 has enlisted the help of partners at Splash Damage and Ruffian to deliver on two of the community’s most frequent longstanding requests – adding Halo: Reach to MCC — and bringing the entire collection to PC via the Microsoft Store and Steam.

This week at E3 we’ll offer attendees a chance to get hands-on with an in-progress demo of Halo: Reach on PC and share feedback with the team. Don’t fret if you can’t make it to the show – we’re getting ready to kick off public flighting of Halo: Reach this month. Please visit www.haloinsider.com to sign up for a chance to participate in MCC flighting and join us on this journey.

We’ve been blown away by the outpouring of excitement since the initial announce and the most frequently asked question we hear daily is “what’s the release date!?“ Each title in MCC for PC will be released in a staggered fashion as they are ready, beginning with Halo: Reach. In order to deliver the best native PC experiences possible, we’ll be partnering closely with the community via the Halo Insider program to get work-in-progress builds into players’ hands to gather critical feedback and learnings along the ways. Check out our April and May development update blogs at Halo Waypoint to read more about our journey to bring MCC to PC. (And as a reminder, Halo: Reach is also coming to MCC on Xbox One!)

The next question we hear a lot is “how much will the MCC PC games cost?” On PC, we’re excited to confirm that each game within MCC will be included with an Xbox Game Pass for PCsubscription as they become available. In addition, each title can be purchased individually – Halo: Reach, Halo: Combat Evolved Anniversary, Halo 2 Anniversary, Halo 3, and Halo 4 will be offered at $9.99USD on both the Microsoft Store and Steam while Halo 3: ODST within MCC (with a current scope of Campaign only), will be available for $4.99USD. Players will have flexibility to purchase any or all the games at any point along the way as they become available.

If everything goes according to plan, our first flight for Halo: Reach on MCC PC will be next week to a small subsection of registered Halo Insiders. We're starting more modestly because we've got quite a few levers to pull and we want to ensure our delivery pipeline runs smoothly, our communications are clear, and that participants can properly provide their feedback on the build. Since there are so many pieces and levers that need testing, verification, and appropriate approvals, we need to take our time to ensure we're sending out a quality flight to our Halo Insiders. The team has a build which appears to be a strong candidate, but it's still in the middle of going through the test process as I type (and as you read). That said, we're still targeting to release next week and will be sharing the details with the public, so even if you aren't selected for the flight, you'll know what's happening. Stay tuned for more details throughout!

PvP Flight WILL be coming to PC after the XBO Flight (some were confused on this)
PvP is the last piece of the Flighting "pie" will be the last test case before launch
Xbox memory issues have been resolved
Progression will be tested (XP based)
They MIGHT add FireFight maps to MP officially (they liked Gamecheat13's video)
Will support modding day 1 in customs and non server based modes
The mod support wont be the "official" mod support talked about before, but they are all for the community making mods day 1 without it.
Official mod support will be talked about later
Investigating adding TU setting options in custom games (probably will be, but post launch)
6 total maps for the flights
Invasion will be tested
Jackal shield bug on PC was caused by server issues
Looking into custom dedi-servers, need a solution but aware a lot of people want it
re-confirmation that a lot of work that went into Reach and initial launch won't need to be re-done for the other games
Next flight will be more than the 10k from the last flight
Very close to getting the Xbox flight out the door 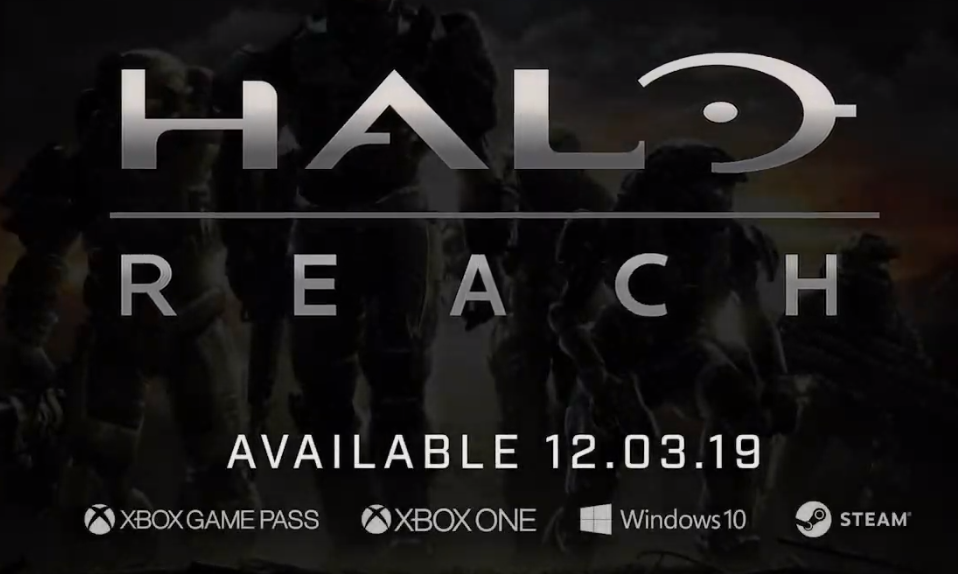 Halo: Reach* comes to PC as the first installment of Halo: The Master Chief Collection. Now optimized for PC, experience the heroic story of Noble Team, a group of Spartans, who through great sacrifice and courage, saved countless lives in the face of impossible odds. The planet Reach is humanity’s last line of defense between the encroaching Covenant and their ultimate goal, the destruction of Earth. If it falls, humanity will be pushed to the brink of destruction.

• PC Settings/Optimizations: Halo: Reach is now optimized for PC and looking better than ever at up to 4k UHD and at least 60 FPS.** Other PC native settings include mouse and keyboard support, ultrawide support, adaptive sync support, FOV customization, and more.
• Campaign: Experience the first chapter in the Halo Saga and fight your way as Noble Six through 11 unforgettable missions
• Multiplayer: Start your Spartan Career today with Halo: Reach’s iconic multiplayer featuring an overhauled progression system, generation-defining player customization, over 20 unforgettable maps, as well as classic game modes such as Firefight and Invasion. While Forge and Theater will be delivered later in 2020, enjoy access to millions of community-created maps and game types that have been migrated over from Halo: Reach on Xbox 360 for use today on PC.
• Firefight: Fight alone or with squad mates to survive against endless waves of enemies deploying with ever-increasing difficulty.

*Halo: The Master Chief Collection is required to play the (digital only) Halo: Reach.

Gamepass has this on its main banner on console saying ‘complete the collection play all 6 games’ but MCC won’t launch... it only has 5 games till Reach...

More stuff for the backlog. I’ll make a start on the first ten and try and chip away at the next 61,199,990 every day after that.

So Reach is out today.

I'll definitely give this a go, although Reach was the point where I reached burnout with regards to the Halo franchise so I'm interested to see what my thoughts are on it now.

It was the last game I played in the series and also the first one that I didn't make it all the way through.