Showtime Near Deal to Partner with Xbox Studios on ‘Halo’ Series

Xbox Entertainment Studios is deep in negotiations with Showtime to develop a live-action “Halo” drama series that is a high priority for the Microsoft production unit headed by Nancy Tellem.

Xbox Studios has been developing a drama series spin on the vidgame franchise with Steven Spielberg’s Amblin TV banner for more than a year. It’s understood that the company is close to a deal with a pair of showrunners to steer the series adaptation of the expansive bible developed by screenwriter Stuart Beattie, but the deal is not envisioned as a straight-to-series pickup.

Xbox aims to develop “Halo” and other properties as high-end series productions in an effort to enhance the Xbox platform as an entertainment service for its base of 48 million subscribers.

The deal with Showtime has taken a long time to work out because the sides are charting new territory for a show designed to air on Showtime as well as Xbox, with enhanced interactivity built in for the latter platform. Details are still being hammered out, but sources say the plan is to have episodes bow on Showtime first, followed by the Xbox window.

Tellem talked up plans for “Halo” and a host of other shows earlier this week as part of Microsoft’s NewFront presentation but did not mention the Showtime component. The various companies involved have taken plenty of time to work out the deal because “Halo” is such a prized property for Microsoft.

Reps for Showtime and Xbox declined to comment. Spielberg is exec producing the TV adaptation along with Beattie, Amblin’s Justin Falvey and Darryl Frank. Xbox Entertainment Studios is producing with 343 Industries, which oversees all things “Halo” for Microsoft.

Great partner to pick, I pretty much enjoy all their shows so that's a hopeful sign.

And 2015 won’t simply be the year of “Halo 5: Guardians,” it will also be a year that offers us a unique opportunity. The opportunity to invite old friends and new audiences into that universe through the “Halo” television series, launched as a unique collaboration with Steven Spielberg and some of the finest creative minds in the business. A series that will stand alone, as well as complement and enrich the game experience. We’ll have more to share on the “Halo” television series as we near its projected fall 2015 release.

343 Industries, Xbox Entertainment Studios and Scott Free Productions are behind the live-action project, which is being executive produced by Ridley Scott and Scott Free TV president David Zucker.

“Prison Break” creator Paul Scheuring wrote the ”Halo” digital feature, which is expected to debut before the end of the year. It's a completely different project than the TV series that Steven Spielberg is producing for Xbox One.

Expected to follow the same format as Machinima's “Halo 4: Forward Unto Dawn,” the story is set in the 26th century and follows a surgically-enhanced super soldier who is not Master Chief, TheWrap has learned.

Instead, Colter is expected to play Marlowe,a rising star in a futuristic army who is troubled by aspects of the military industrial complex he inhabits. Approaching combat situations with caution and logic, he inspires loyalty in his fellow Spartans.
Microsoft plans to announce more details about the project, including additional cast, at E3 in June.

Filming down in Belfast at the moment

A source close to FTN just sent us a link to a video that, while admittedly not very exciting, confirms that filming has begun in Belfast’s Titanic Quarter on the Ridley Scott executive-produced Halo Project.

Outside the Odyssey arena

They're filming here in NI? Awesome!

“The Master Chief Collection” also features the debut of “Halo: Nightfall,” an all-new digital series executive produced by legendary director Ridley Scott and directed by Sergio Mimica-Gezzan (“Battlestar Galactica,” “Heroes”). While details on the project are protected as fiercely as UNSC secrets, we can reveal that the series – airing weekly – will tell the origin story of an all new character that is pivotal to “Halo 5: Guardians.” 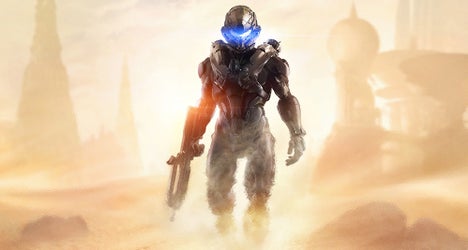 Apparently there's a short clip of the show at the panel at comicon on Thursday. Another couple of big images -

Taking place between the events of Halo 4 and Halo 5: Guardians, Halo: Nightfall follows the origin story of legendary manhunter Jameson Locke (Mike Colter) and his team as they are caught in a horrific terrorist attack while investigating terrorist activity on the distant colony world of Sedra. Led by Locke, the Office of Naval Intelligence (ONI) agents are forced to coordinate with a Sedran commander with a remarkable history and deep-rooted mistrust of ONI. As the plot unravels, they’re drawn to an ancient, hellish artifact where they’re forced to fight for their survival, question everything, and ultimately choose between their loyalties and their lives. Agent Locke is a new character in the Halo universe poised to play a major role in Halo 5: Guardians releasing on Xbox One in 2015.

“In science fiction, we're always searching for new frontiers. We're drawn to the unknown,” said Scott. “With Halo: Nightfall, we're pioneering a new medium in terms of interactive storytelling on Xbox. It’s going to be fun for long-time fans to see how the worlds come together with an ambition to attract new fans along the way with what we’ve created.

Halo: Nightfall is included as part of the Halo: The Master Chief Collection and will be accessible digitally on Xbox Live beginning on November 11, 2014.

Executive-produced by Ridley Scott, Scott Free TV President David Zucker, and directed by the award-winning Sergio Mimica-Gezzan ("Battlestar Galactica," "Pillars of the Earth," "Heroes").
Halo: Nightfall is a live action series providing insight into the origin and backstory of legendary manhunter Agent Locke (Mike Colter, “The Good Wife”), a pivotal new character in the Halo universe who will play a key role in Halo 5: Guardians. A strange and treacherous world exposes elite UNSC operatives to a much deeper danger.

1st episode will premiere in the early hours of Nov 11th on Xbox Live, Xbox.com and Twitch -

World premiere of Halo: Nightfall. The evolution of Halo storytelling continues with the debut of Halo: Nightfall. Watch the first episode of this original live-action digital series, which introduces Agent Locke – a pivotal new character in Halo 5: Guardians. Halo: Nightfall is the result of an unprecedented collaboration with industry talents like Ridley Scott and Sergio Mimica-Gezzan, who worked hand-in-hand with 343 Industries to raise the bar for live-action storytelling in the Halo universe.

5 episodes in total to add to about the length of a feature film.

The above post, unless specifically stated to the contrary, should not be taken seriously. If the above post has offended you in any way, please fill in this form and return it to your nearest moderator.

Had not been following this at all but watched the trailer expecting it to be rubbish, was really surprised. It looks pretty good. Mind you I have always liked Bishop....

Some reviews of the 1st Nightfall episode -

All told, Nightfall gets off to a fast start that has me excited to watch the rest.

The first episode of Halo: Nightfall is a fine setup for a longer series, and an ambitious project to connect the future of the Halo series with its newly remastered past.

This show was only green-lit because of the Halo name and it will die after this season because if this pilot is any indication it’s not only a bad Halo adaptation, it’s just a bad show. We now expect brilliance from our television. You can’t ride the Halo brand and expect poor storytelling, bad acting, and horrible CGI to get you anywhere. I want the industry to stop trying to adapt Halo because they’re doing it for all the wrong reasons. Just make an entertaining show and stop destroying my hopes and dreams.

As you would expect from Scott, the director of "Alien" and "Blade Runner," "Nightfall" is visually amazing. Episode 1 -- a review copy was provided by Microsoft -- looks fantastic. The sets, effects and costumes create a rich, fully-formed world that ties in tightly with the video games.

The problem? In a world where TV audiences can get movie-quality production in tightly written, multi-layered stories from numerous cable TV shows, "Halo: Nightfall" doesn't offer anything new and falls short in its story-telling.

Whether or not they do, it’s worth tuning in just to see the look of the show. Scott’s big-budget sci-fi expertise shines through in sets and special effects. A Covenant drop ship looks heavy and satisfying in the air, and a large alien (whose identity I won’t spoil) moves as if it’s made from foreign flesh and bone, not CG-created pixels. Weapons and armor will make Halo fans cheer as the show reproduces details faithfully.

The pilot’s one visual weakness turns out to be the appearance of near-human aliens, who mostly end up seeming like Homo sapiens subspecies “Great Makeupus.” The CG-generated alien figures look terrific, as do the human characters, so only those unfortunate souls caught in the middle end up awkward.

Microsoft and 343 characterize this as another step in the interaction between dramatic series and games in the Halo universe, and if Colter gets a chance to show some chops, it may make Locke a more compelling figure to play as. Until then … tune in for the special effects and the chance to reminisce about a series we’ve played for 13 years.

There is obvious potential here, though Halo: Nightfall has a long way to go to flesh out its characters. In terms of story, bridging the gap between this and Halo 5: Guardians seems like the easy part. Doing so with believable, sympathetic characters seems harder. There's time to to do that, but the first episode presents viewers with only sketches and outlines of characters.

Episodes are half an hour long?

I thought Nightfall was just a one off feature? Isn't the Showtime series next year the actual show?