Anything to do with games at all.
Post Reply
275 posts

I've been trying out this approach of raising awareness on upcoming Amico games; taking a screenshot and placing the title and some Amico logo stuff in a standard style onto them. Hopefully it kickstarts a few responses and a conversation and we can then carry it on from that point.

It's going okay so far!

It all seems pretty cool so far. I *am* using an Intellivision logo - the "running man" image - on the channel... err, and the Amico text logo... but, I feel, in a respectful and "fan based" way. I clearly state "unofficial" in the channel description, too.

If I had to change stuff I would but Intellivision seem to be very supportive of fan stuff; I think they see that, as a relatively small company in a big market, it can help raise awareness. I keep things positive and with no bad language, too

It's a bit of a strange time in the world of Amico at the moment. It feels like the console could do with arriving in March/April, but it sounds like the impacts arising from the on-going COVID situation (i.e. development and manufacturing delays) are affecting the launch plans and "summer / late summer" appears to be the target now.

I think that advertising and awareness plans are - understandably - being put on hold until nearer the launch. The small group of dedicated fans are still chatting about the system and remain excited, but I think more news may be hard to come by in the next few months. It's frustrating as many games are complete or nearing completion but the manufacturing and approval processes are, like a lot of stuff in the world right now, gonna take time.

But, hey, us fans are still talking about the Amico... currently we're picking out our favourites of the six pack-in games!

Tommy Tallarico has indicated that "July, late July" is a possibility for launch. This is promising; later than folk had originally hoped for, obviously, but reasonable considering the manufacturing and testing time impacts arising from COVID.

Another positive aspect is that Intellivision currently expects around thirty games to be available at launch, with a further fifteen or so lined up for the couple of months immediately following this.

I'm interested to find out more about Bomb Squad as this is a multiplayer title that utilises all of the functions of the new controllers; you have to work alongside other players to complete activities in time to diffuse the bomb - which is in the actual console - the game uses light and sound on the console and controllers to signify different situations!

That's pretty cool that the console itself is part of the game, reminds me of "keep talking and nobody explodes".

Jawa - have they approached you yet with a free console?

Victor Mildew wrote:...That's pretty cool that the console itself is part of the game, reminds me of "keep talking and nobody explodes".

Yeah, it does sound like it has some neat ideas:


Rex Kramer wrote:Jawa - have they approached you yet with a free console?

I'm small beer compared to some of the guys in the Amico scene that make videos and stuff! I'm solely focused on the Twitter channel; hopefully I'm gonna be posting more as we start to see lots of screenshots and footage of the upcoming games. Stay tuned in with TotalAmico, Rex! :-). 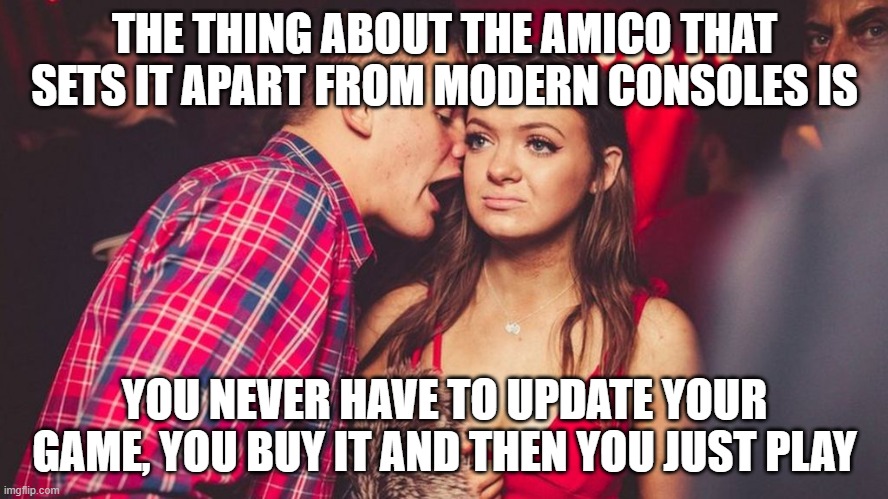 It's the calm before the storm in the world of Amico. I suspect that the launch is going to be officially delayed to July/August (COVID impacts on manufacturing) but we're awaiting news on this. In the meantime, Intellivision are planning on ramping up their video releases of upcoming games and I think one of the first to be shown will be Finnigan Fox.

Slim, I reckon. Funding appears to be in place and the launch delay is due to impacts on manufacturing arising from COVID. Development is progressing well with 35 games (including the six that are included with the console) anticipated to be ready at launch. Deals are in place at retailers across the US and Europe and pre-orders can already be placed at many; including Amazon, GAME, Argos and The Game Collection here in the UK.

Thanks for that, Jawa. Sounds pretty robust then. Good to know

jawa2 wrote:...In the meantime, Intellivision are planning on ramping up their video releases of upcoming games and I think one of the first to be shown will be Finnigan Fox...

Wait - so Finnigan Fox is just Fox n Forests but with the lovely pixel art removed and bad flash-eque animation pasted on top? The original game is pretty good, so I'm sure it will play fine, but why?!

Also does Tommy press on the controller (instead of a button) to jump? That will get old VERY quickly.

Hound wrote:Wait - so Finnigan Fox is just Fox n Forests but with the lovely pixel art removed and bad flash-eque animation pasted on top? The original game is pretty good, so I'm sure it will play fine, but why?!... 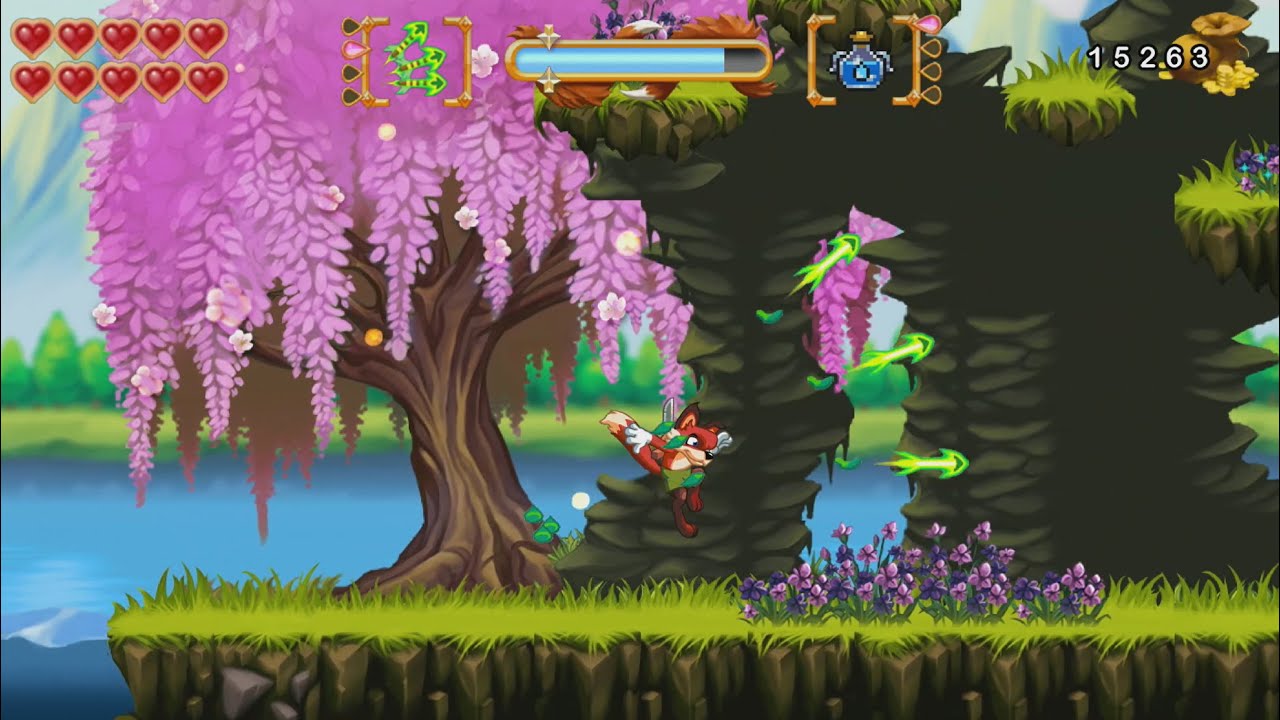 
Style is in the eye of the beholder. I still enjoy pixel styling in games but it feels harsh to suggest the Amico version looks bad. The Amico game is a sequel to Fox n Forests and is being made by Bonus Level Development, the maker of the original game.

Hound wrote:...Also does Tommy press on the controller (instead of a button) to jump? That will get old VERY quickly.

There seem to be a fair few "enthusiastic" Amico advocates on Youtube and that.

Spindash wrote:There seem to be a fair few "enthusiastic" Amico advocates on Youtube and that.

Yeah, there are some folks who regularly post vids and Tommy Tallarico often pops by to answer questions, too; it's good fun. There are also one or two characters who make somewhat strange and/or funny videos; as well as a few people who often post videos and comments calling the Amico a "scam" (the reasons for this seem a bit odd) and make claims such as saying the console doesn't exist.

It's pretty much like YouTube on most topics; you can usually find a multitude of differing opinions :-).

Here we go! Intellivision will be sharing news about the launch this Wednesday, 17 February. I'm *hoping* that a global release date will be confirmed and that it'll be July/August. It may just be details about the Founders edition consoles. We'll see!

Hound wrote:...Also does Tommy press on the controller (instead of a button) to jump? That will get old VERY quickly.

I've just seen a post by Tommy over on the AtariAge forum where he confirms that the controller can be turned around to suit the user's preference during a game:

Tommy Tallarico wrote:...In the Astrosmash video I showed how quickly you could move the controller and see the entire control scheme switch instantly. In the FINAL version (which we already have implemented of course) you actually have to hit the HOME button first and then change the orientation you want. The reason for this is that when you play a game your hands go all over the place and it would switch when you wouldn't want it to... so we make it so you need to LOCK it in...

Also, lots more news coming out from Tommy in response to questions posed over at AtariAge:

> The directional disc - "It's actually more of a spinner than a traditional Dpad... A traditional Dpad only has 8 directions. Ours is 64 with pressure sensitivity as well. It's like a combination of a dpad, analog stick and spinner... If you press the disc down and rotate it... it acts similar to a spinner... which dpads are unable to do."

> I get a feeling that the launch date could be a little later than hoped. Tommy has spoken about the challenges in competing with the bigger global companies for specific electrical components in the current market; and issues around booking space on shipping from China right now. I suspect that the launch date may be in the autumn rather than my earlier hope for July/August.