Anything to do with games at all.
Post Reply
784 posts

I don't even own a Switch right now, but I'm so happy about this.

Looks absolutely gorgeous. Been wanting this since a Link Between Worlds.

It looks beautiful and I will fight ignore anyone who says otherwise.

Balladeer wrote:It looks beautiful and I will fight ignore anyone who says otherwise.

Balladeer wrote:It looks beautiful and I will fight ignore anyone who says otherwise.

I bow to you oh wise and all-knowing prophet!

But seriously, completely unexpected for me and an utter belter to end on.

Oh my gooood the pet Chain Chomp BowWow quest is going to look so cool.

Never played this Zelda game so I can’t wait to finally play it!

As soon as we saw the waves I freaked. Knew instantly lol. I think the art direction fits perfectly because of the dreamlike nature of the game. I'm sure the darker undertones will still be there. The most important thing is the remade songs >,> Tal Tal Mountain my dudes.

The original was my first ever Zelda game, so it holds a special place in my heart.

I figured it would end on either Metroid Prime Trilogy, or it would be a 2D Zelda. One I saw the waves I knew it wasn't Metroid, but then I got the "Links Awakening?" feeling. Such a good reveal. Can't wait for this one.

I wonder if it will have the GBC-exclusive dungeons?

Wasn't there only one GBC dungeon? Called the Color Dungeon.

Maybe they'll add a switch dungeon with loads of switches in it.

Pedz wrote:Wasn't there only one GBC dungeon? Called the Color Dungeon.

Maybe they'll add a switch dungeon with loads of switches in it.

Ah yeah. It's been a while.

Also, also, it better still let me steal things from the shop by running circles around the shopkeeper.

Looks lovely. Can't say I've been a fan of 2D Zeldas or even tried one as far as I can remember but this looks fantastic. I have A Link Between Worlds so might give that a try on my 3DS to give me a taste of a 2D (Well 3D 2D) Zelda. I do also have Links Awakening DX on it too via VC..

Copying what I just rambled in the Direct thread following watching the trailer in my brief attempts to pick it apart:

It looks perfect, the original art style of Link's Awakening was already perfect and somehow they have captured its tone exactly while still updating it and bringing into shiny 3D. Plus the opening cutscene all redone as hand-drawn animation and that title like screen heavily drawing from the original concept art and basically I love it.

Rewatching the trailer the actual screen layouts look identical to the original so it seems like a 1 to 1 remake just with a complete aesthetic update - the big change is that it now scrolls on the overworld rather than having individual static screen transitions, although I'm guessing it will still transition between "areas" (like Mabe Village and the Mysterious Forest, when talking to the owl it looks like Link is at the bottom of the screen so it's probably a transition there EDIT: I don't think this is true actually, you can see the edge of the fishing pond very briefly as the camera zooms in). Inside dungeons it looks like it's still single screen rooms, which makes sense given the hidden rooms and how weird it would be to see between rooms (maybe just the multi-screen rooms will scroll). Hopefully the update brings QOL updates too like easier weapon/item switching. It's hard to tell because there is no HUD in the trailer at all, so we can't see equipped weapons, but in the side-scrolling section Link is jumping (with Roc's feather) but still has the sword and shield equipped, which is impossible in the original due to the two item limit. 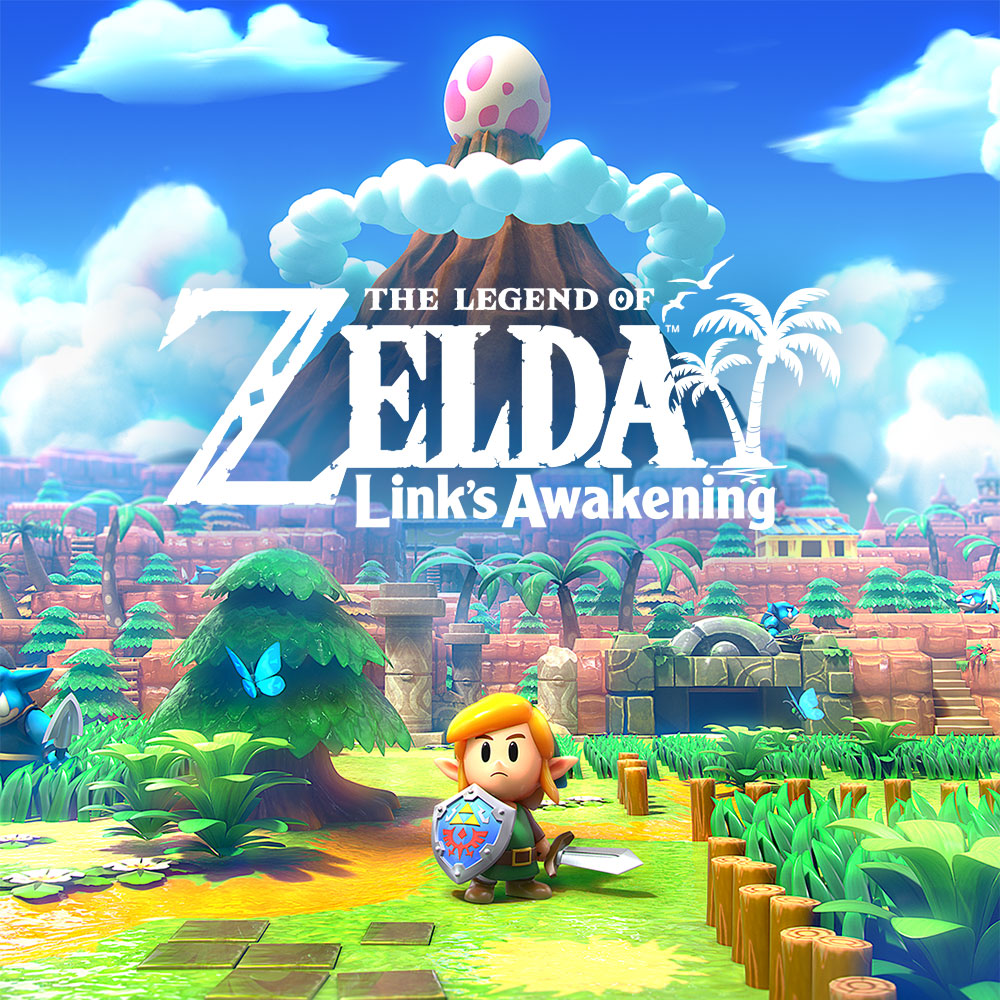 EDIT: On further examination it's not exactly 1 to 1, there is some variation in tile layout! It's pretty damn close (the grass pattern outside the kennel is identical for example), but the Banana house at the beach has a different number of trees and bushes around it. 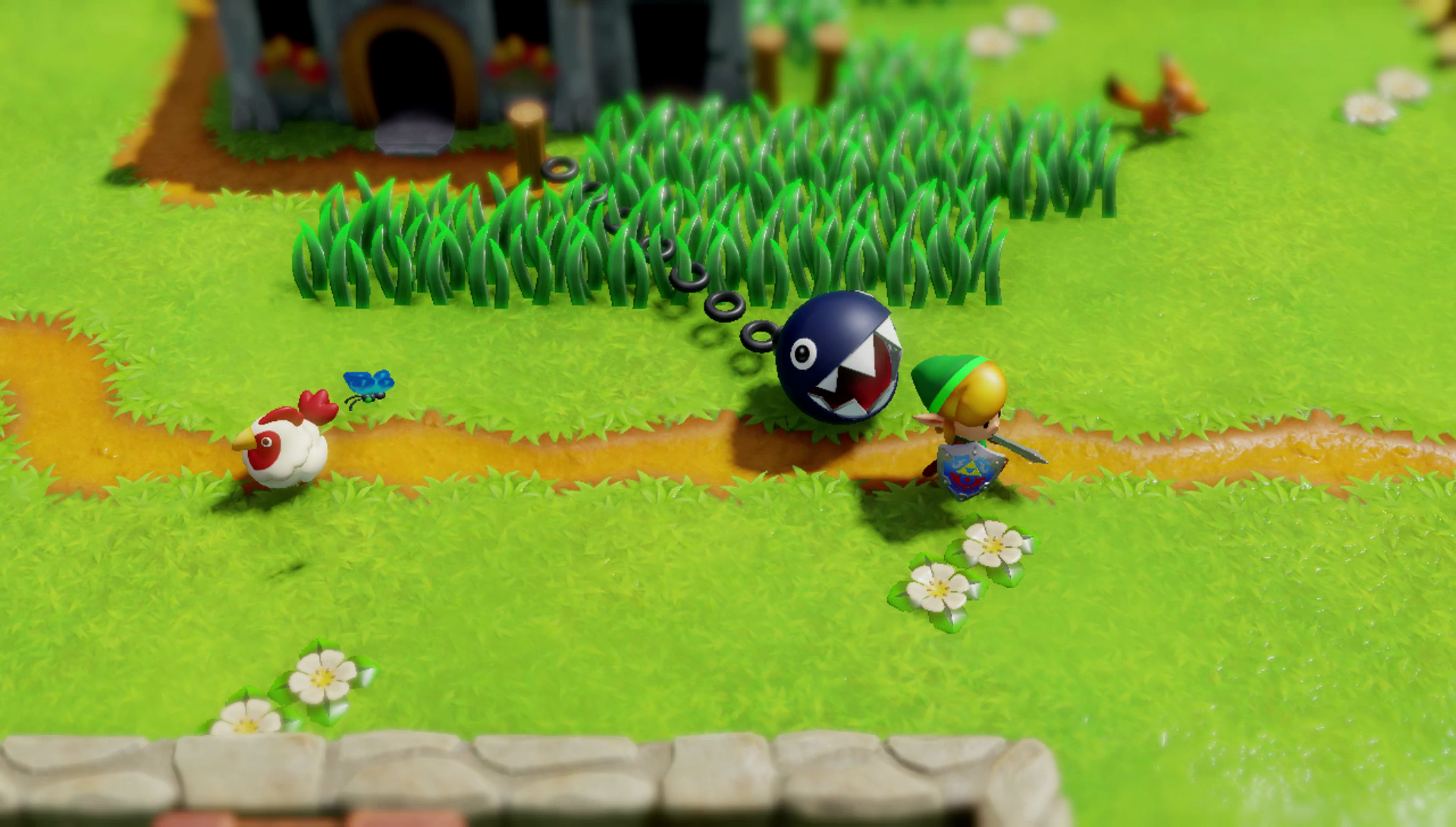 Having seen the trailer full screen and proper resolution now I can see the charm of the art style. In some place it still feels a little to close to the flat ugliness of ALBW but with a more appealing cartoony twist.

I will say that so far I prefer the GB original version of the Intro theme. It just has a bit more energy to it.