Monks Park is in or near Southmead. It's probably best not to serve hot food there, the locals still don't understand fire and cheese toasties would blow their minds.

Do YOU know who dumped this large bucket of human poo in Stoke-on-Trent alley? (and there's a £100 reward to catch the culprit)

A large bucket of human faeces has been dumped in an alleyway - and a £100 reward is up for grabs to catch the culprit.

Businesswoman Vivienne Simpson was left stunned after making the grim discovery when she went to move her wheelie bins earlier this week.

It is thought that the bucket was dumped sometime between 9.30am and 2.30pm on Tuesday in the alley which backs onto Ford Green Road and comes out on Kirk Street, in Smallthorne.

Vivienne, who owns Viv's sandwich shop, on Ford Green Road, said: "I'm absolutely disgusted. This is something people would have done in the 1800s - but not now. I've had rubbish and cardboard boxes left in the entry before but never anything this bad. I'm willing to give a £100 reward to anyone who has any more information about this."

Let Them Eat Cake cafe owner Karenn Copestick, from Middleport, has a clear view onto Kirk Street from her cafe window.

She said: "I do see people generally hanging around outside, and I sometimes see homeless people who I help to feed, but I haven't seen anything as untoward as this.

"We have a toilet here for customers. We do allow police officers and postal staff to use it and we've even had a mum and toddler pop in looking to use it which we allowed them to do. If anyone was that desperate, they'd only need to ask and it wouldn't be a problem.

The incident has been reported to Stoke-on-Trent City Council's environmental crime unit which is checking CCTV from the surrounding area.

"We need to see a clear picture of either a person or a vehicle, with its registration number and any possible company names on the vehicle, in order to prove it beyond reasonable doubt.

"From what Vivienne has said, it sounds like someone has intentionally placed the bucket behind the bins. If they'd thrown it out of a vehicle, it would have made a mess everywhere."

How can they be sure it's human?

The incident happened on the number 7 Gold Stagecoach double decker bus just after 10.20am on November 21. Details have just been released by police.

The man is described as white, with brown shaved hair. He was wearing a blue top with white stripes, dark trousers and a jacket.

And then I got OFF the bus ahhhhh

Looks like it's not just bus wankers in Swindon at the moment.

A SHOPPING centre masturbator is sought by police.

Wiltshire Police issued an appeal for the man, saying they wanted to speak to him in connection with a suspicious incident in the Brunel Shopping Centre on Wednesday, January 2, at around 3.40pm.

The man is described as white, grey-haired and wearing a black coat with light-coloured collar.

or he gets turned by being on the 458

Anyway I'm pretty sure I've seen someone wanking on a bus before, just randomly feeling their member through their trousers.

Cheese toasties banned from Bristol park for fear of gangs

Cheese toasties have been banned from sale in a Bristol park amid fears a proposed hot food van could attract booze-fuelled antisocial behaviour and motorbike gangs.

Councillors have agreed to grant a provisional licence for cold food, such as ice cream, and tea and coffee in Monk's Park, Biddestone Road.


But the vendor would be barred from selling hot snacks following dozens of objections from residents, a ward councillor and the headteacher of a nearby secondary school.

In the past the park had been plagued by gangs of motorcycle-riding youths “terrorising” families, as well as late-night drunken disturbances, the city council’s public safety and protection committee heard on Tuesday. 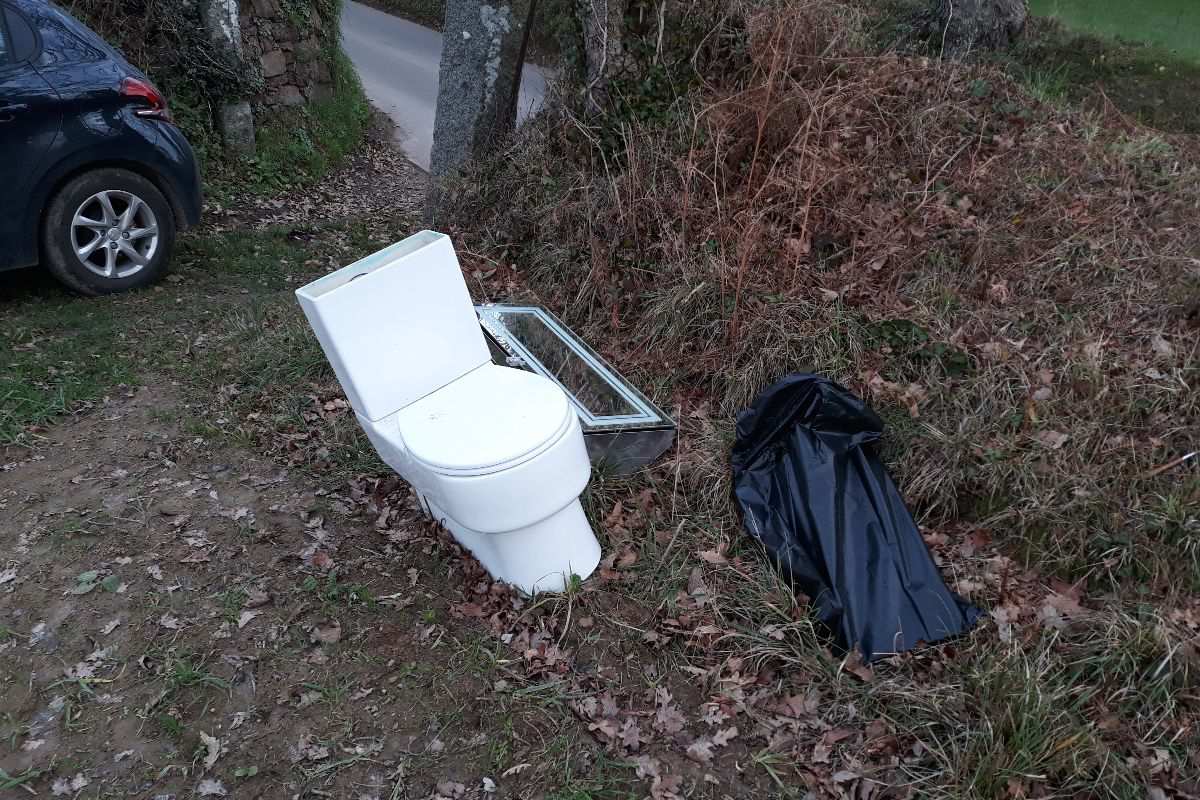 The States of Jersey's Environmental Protection team is appealing for information after a toilet, bathroom cabinet and tiles were found dumped in a field off a country lane in Trinity.

They were found in an isolated area near Trinity Village

Richard Runacres is Waste Management Officer for the Department of Growth, Housing and Environment:

"It is particularly disappointing that an individual or business has taken a decision to dump their waste in the tranquil countryside of Jersey. As a community, we all have a part to play in keeping Jersey clean and tidy. That means taking responsibility and dealing with your waste properly."

There was a reason for the bumper harvest.

A woman has spoken of her shock after seeing a couple engage in a bizarre sexual ritual in an area of public woodland near Horsforth. Police have stepped up patrols after the incident on the Hawksworth Wood Trail on Friday afternoon. The witness, posting in the community Facebook group for residents of the Hawksworth estate, claimed she had seen a 'ritual' taking place in the local beauty spot while walking in the woods with a friend. "Around lunchtime my friend and I witnessed what we think was some sort of ritual. We saw a naked couple on a white plastic sheet having sexual activity while chanting and praying with a dead bird at the side of them. The man then wiped blood from the bird on the woman's head while she lay on the ground. Other people were there who seemed to be watching. It has been reported to the police and the (nearby) school as they were in full view and I know families walk through there and kids play there. They didn't seem bothered that they'd been seen. It was a really odd situation to stumble upon." West Yorkshire Police said:- "Police received a report of public indecency at Hawksworth Wood Trail on Cragside Walk in Leeds yesterday afternoon. "Police have stepped up patrols in the area."

Someone is clearly fed up of seeing dog mess on the town's pavements in Cheltenham.

A very angry Cheltonian has gone out and literally highlighted the issue by circling the poo in colourful chalk and alongside it written some strong words in equally colourful language.

The poo has been circled on the pavement at Grosvenor Place South and has bold statements such as ‘please owners clean up your dog’s s***’, and ‘it is not my job’ and ‘my children walk here’.

It would be interested to know if the owner of the dog that fouled on the pavement is aware of the chalked frustration that now illustrates the pavement.

(Dog)-shit just got real in Cheltenham.

Someone around here was going around spraying it pink for a while, like that was supposed to shame the dog owners, but then if they don't cssre about picking up gooseberry fool, why on earth would someone spraying it pink make any difference?

Villages used to have an idiot, now they have a fascist. After putting books in a local phone box library for local residents to take out, a man was shocked to see someone had added 20 fascist books into the collection.

Roger Bland, who helped transform the council-run phone box into a village library for the residents of East Winch, said the books were added on Tuesday evening.

Among the fascist books were anti-semitic title The Protocols of the Elders of Zion and Mein Kampf.

Mr Bland believes the person responsible may have called The Sun newspaper after putting the books in the phone box.

Someone from the newspaper knocked on Mr Bland's door on Wednesday night to enquire about the books.

An eyewitness reportedly saw someone get out of a car on Tuesday night and was seen by the phone box for a while.

However, they could not see the registration number or identity of the person due to lightfall.

Mr Bland said: "Children go in the phone box and exchange books.Whoever did this should not be putting racial books in there.

"It's not pleasing a lot of people."

He added all the fascist books were immediately put in the bin.

However, he did then retrieve five books from the bin for the purposes of a photo for the The Sun's article.

Mr Bland continued:"There have been one or two people who complained about it. I have done nothing wrong and I do not know anyone in the village who would do that."

Borough councillor Jim Moriarty said he would be surprised if the issue was not raised at the next parish council meeting.

Mr Moriarty said: "I would not rush to judgement that these books were left by somebody from the local community, just as one wouldn’t assume that flytipping was necessarily carried out by those local to where it is found.

"In fact the opposite is generally true."

He added that the books may have been left by somebody who was too embarrassed to take them to a charity book shop and took advantage of the "relative anonymity" of dropping them off in a converted phone box.

Vermilion wrote:Villages used to have an idiot, now they have a fascist.


Amusement under late capitalism is the prolongation of work.
Top
Post Reply
375 posts