Anything to do with games at all.
Post Reply
454 posts 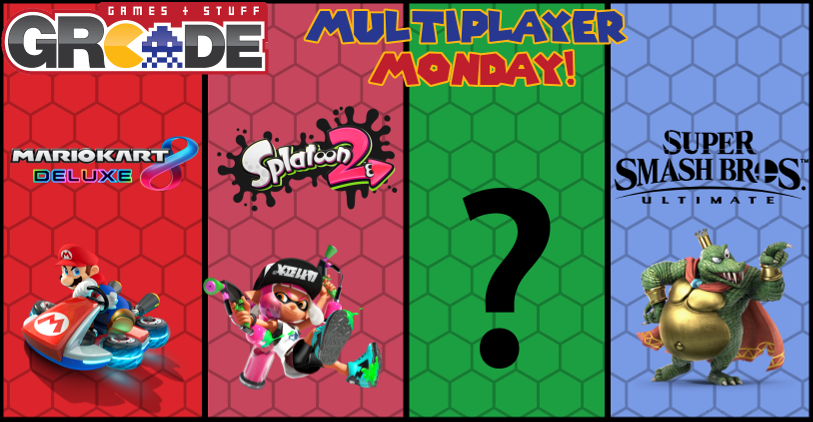 Hey all, with the recent interest in Mario Kart Monday and further Multiplayer sessions, I thought a little OP revamp was in order.

Basically every Monday at 9:00 PM the folk of GRcade are going to meet up on Monday and play a few games together. We'll be playing a mixture of 4 games, and they will be rotated each week so to keep the sessions fun and less likely to feel stale than doing the same game every week.

The 4 games, as you may be able to see from the image above are:

If you want to take part, just turn up on the day and join in.

For Mario Kart 8 Deluxe you will need the tournament code which is 5419-3405-0859. When it comes to Splatoon 2 we usually play in random battles unless there are enough of us for a private room, which can be easily set up on the day. Rocket league Rooms need to be made on the day and we name the Room GRcade1 with the Password rlmonday. Lastly, there's Smash and the room which can also be set up on the day.

the multiplayer sessions will be streamed on the GRcade Twitch channel which is here. and we'll be all chatting having a laugh via the GRcade Discord which is available on PC and mobile devices all you need is a headset or even your handsfree kit for your phone. If you want to join in with the people on Discord whether you want to chat or simply listen to what others say, just click here.


Thanks all who take part.


Original Post
I have recently been going through old Twitch stuff and there's a lot of funny moments from Mario Kart Mondays, and it's making me miss playing it with you lot.

Basically, I was wondering if everyone would be up for a one-off return to the game so we can have a night of fun. I think some may be up for it, but I'm unsure. As it's Monday tomorrow I think it may be too short of a notice, so what about the 3rd of February?

I'll be down with that.

I'll do my best to take park next Monday

This is gonna be good!!

If the internet's up to scratch

I should be able to attend

I shouldn't be casting then so I'm in as well.

I've onlly played the Wii U version with you lot before, so count me in for some switch action.

Sounds good to me!

What time would this start, 8pm?

9 is the usual time of Mario Kart Monday.

I'll play it by ear and see how I feel closer to the time.

If I'm doing nothing on next Monday evening, count me in.

If this is a success, I wonder if there would be some interest in doing a monthly event? First Monday of every month perhaps? Just a thought.

Tomous wrote:If this is a success, I wonder if there would be some interest in doing a monthly event? First Monday of every month perhaps? Just a thought.

That would be cool, first Monday of the month or something.