On an isolated island off the coast of Maine, 37 people have been invited to a party at Curdama Manor. What they don't know (until they read this) is the promised week of debauchery is actually someone's sinister plot.

Welcome to Memento Mori's Are you a Vampire 2?

Specator Thread- If anyone not playing the game wants access to discuss, please PM me. All dead players will get access without asking.

General
1. This is an anonymous game with anonymous accounts. Please do not publicly speculate who might be playing and under what account.
2. Please as best as you can try to only post in this thread with your alt account. Please do not use your alt account in any other non-game thread.
3. Shortly a spectator thread will be created for dead players, please do not try to access it if you're not dead. Functionality should prevent this but don't even try.
4. Unless otherwise informed by myself you are not allowed to communicate privately with any other player. You can of course PM me whenever you want.
5. Occasionally you may get a PM from myself which is time-sensitive. You will never be penalised for failing to respond to such a PM but you may miss an opportunity. As I value my beauty sleep don't expect such PMs outside of 9PM-10PM.
6. Do not death post under any circumstances while the game is running. As an addendum to this, if I inform you by PM you are dead, you are dead whether or not I have announced it in the thread. It is your responsibility to check any PMs from me before posting.
7. Please do not state your role PM name other than the descriptions human or vampire. If for some reason you wanted to role-claim vampire. You can claim any role's ability but you are not allowed to copy/paste role PM text. No sharing of role PMs as per usual.

Voting
1. Each day the players must collectively vote for their mayor who will choose which two candidates are put up for lynch vote.
2. No lynch is an option.
3. The mayor can then seclude themselves in the basement panic room for the night. They can also bring 1 guest if they wish. The guest needs to be publicly announced in the thread.
4. Nobody can go in the panic room two nights in a row.
5. Nobody in the panic room can use any special ability if they have one.
6. The mayor must announce lynchee candidates before 7PM for a lynch vote to be official. Mayoral candidate with most votes at 6PM is mayor.
7. All votes in thread publicly for the lynch unless decreed otherwise by mayor.
8. If the mayor wants a secret ballot, all voters will PM the mayor who will then give me the vote tally at 9PM. The mayor does not have to give me a correct vote tally.
9. In the event of a tie, the mayor can choose which of the lynchees to die. Or they could choose to kill neither.

1. If any player thinks they've found an inactive player, PM me their name.
2. An inactive player is classified as one who has not posted within the last 24 hour period (9PM- 8:59 PM).
3. If the player fails my review of their activity, (checking their post history), they will be staked at 9PM.
4. This will continue until the end of the game.

The mayor must also be explicitly clear that he wants the pentagram participants scanned before 7PM. Saying something like "I will be entering the above guests in the pentagram please, oh gracious count". would do this. If I'm in any doubt whether the mayor wants a pentagram run, it won't happen.

They will be examined in order from 1 to 5.

Night 0- 12th December
Ali Curdama was found dead on night 0 while guests searched the poker room.
Invitations and geneological information in the attic.
A panic room with timelock and purple light was found in the basement along with a nest and a shirt labelled Ali. The panic room protects the mayor and a guest from night kills. Cannot be used two nights in a row.
Herbs were found in the greenhouse in the maze in the garden.

Day 1- 13th December
Will Rogers elected mayor and put Kristin Flynn and Peggy Holt up for a secret ballot lynch vote.
After counting the votes the mayor confirmed that the guests had unaminously voted to lynch Kristin Flynn. Kristin was staked but was not a vampire.
The mayor spent the night in the panic room with Hugh Marston.

Hoot Stewart found with his eyes burned out in his bedroom in the west wing.
Peggy Holt found bitten to death in her bedroom in the east wing. She was clutching a religious pamphlet from a charismatic preacher.
Orrery in the libary reveals there's a solar eclipse at 9AM December 23rd. A tome on vampire lore is found.

Zadok Allen wrote:-Vampires can be killed like any normal human
-Vampires will crumble to dust when staked/lynched
-5 vampires and 1 alpha
-Can kill twice a night after fully acclimatising to their powers (no further explanation)
-If two vampires die, they're down to 1 kill a night
-If the alpha dies, they miss a night and have 1 kill going forward
-It's believed that the virus which causes vampires was initially spread by an elder god that they hate

No herbs have been removed from the greenhouse.
Mary Fay lynched- not a vamp.
Hugh Marston and Frank Callahan found bitten to death in the nightphase.
Keira Mason found dead with eyes burned out.
The mayor spends the night in the panic room with Warren Rice.

Day 8- 20th December
Jenkin Brown is found hanging from the rafters in his bedroom. Seering equipment below.
Will Rogers became mayor and put Katy Druitt and Randolph Carter up for lynch!
Katy Druitt lost the vote but fled back to her own dimension! She was dread Nyarlathotep.
Katy empowered the vamps to make two kills- Jack Abberline and Skinner Book.
Henry Armitage and Will Rogers are locked in the panic room.

Day 11- 23rd December
The Count realises he messed up yesterday and gives the alpha vampire two kills for the lynching of Randolph Carter. Everyone is delighted.
Henry becomes mayor but doesn't certify election before 7PM. No lynch.
Eva Murray is inactivity killed- not a vamp.
Henry Armitage and Basil Elton enter panic room.

I would kindly ask every player read the rules carefully.

Hi all, hope all is well.

Ah, the Count sounds like a kindred spirit. I can't remember the last time I've been awake past nine o'clock

Not even the undead will temper Hoot's appetite for debauchery.

Warren Rice
Member
Joined in 2021
AKA: Dead vamp, suck on it!

Good evening, everyone, looking forward to the party.

Changed my avatar to avoid confusion with the other fellow.

4. Unless otherwise informed by myself you are not allowed to communicate privately with any other player.

Safe to assume that the wolves are already in communication with each other do we think?

As the guests gather for dinner in the 37 seat dining room, somebody speaks up,

Did someone have a few too many last night..?

The Count wrote:I would kindly ask every player read the rules carefully. 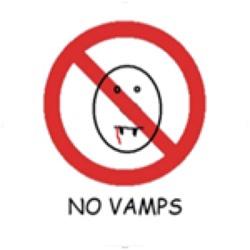 I suppose this is going to be a good banquet, at least. Saves this trip being a total waste.

Warren Rice
Member
Joined in 2021
AKA: Dead vamp, suck on it!

I hope the hosts have picked strong characters for the middle seats. It's a crucial dinner party position

Has anyone seen a menu yet? I hope there's nothing too fancy on it. I'm a simple man with simple tastes.

No sprouts for me please.

Hey all!! Well I liked the drinks party. I hope nothing bad happens as so far this trip has been fab

Users browsing this forum: No registered users and 55 guests