ps Robbo when you doing your CBT?

<]:^D wrote:ps Robbo when you doing your CBT?

Kezzer wrote:Cant ride the bike back. Breaks are strawberry floated. Minimal damage to me

Coming off a roundabout in the middle lane for the M25, both left and middle go into the slip road, guy in the left most lane pulls out without looking, skelping the left of the swing arm and sending the bike into a tumble.


Have lost the breaks and the right mirror and some damage to the engine casing and exhaust.

So I was trying to get home from Bedfont in the evening, lovely night - really warm, perfect biking and road conditions.

I was in the middle lane of a roundabout where both the left most lane, and the middle split off to the M25. From what I can remember the two possible scenarios for what happened are:

1. The guy who collided with me wanted to over take the truck and reach the M25 - so pulled out without seeing me.
2. he was trying to cut across two lanes of traffic to take the next exit of the road about

I think option two is more likely as his car didn't end up on the sliproad...

Either way, the car smashed on his indicator and just moved no checking the mirror or over his shoulder. He collides with the left rear of my swingarm which sent the bike tumbling away down the slip road and me sliding after it.

It was like watching a video from a go-pro, everything was semi slow motion and I can remember vividly the bike sliding down on its right hand side, and me going after it feet first.

Really lucky I was a little ahead of the car as I could have easily ended up under his rear wheels.

So immediate after the crash, I took a little breather while laying down taking a deep breath. No broken bones and everything felt in the right place, so jumped up took off my jacket/helmet gloves etc...

Two other people had stopped but never saw it happen but made sure I was okay. Adrenaline was pumping so did't feel any initial pain it was only later on that I started to feel sore from some road rash i managed to get as my jacket road up on contact with the asphalt.

So I am okay. Nothing major just some cosmetic damage to my left flank, and a bit of whip lash where my head touched the ground ( Have been checked for brain injuries and got the all clear)


Helmet has a scuff and will need replaced, jacket held up well, just gutted as it was a nice Belstaff one - will have some cool battle scars though

All other gear did its job, bike-jeans are in perfect condition given what happened, and my gloves are fully intact amazingly.

Bike is in a worse condition. 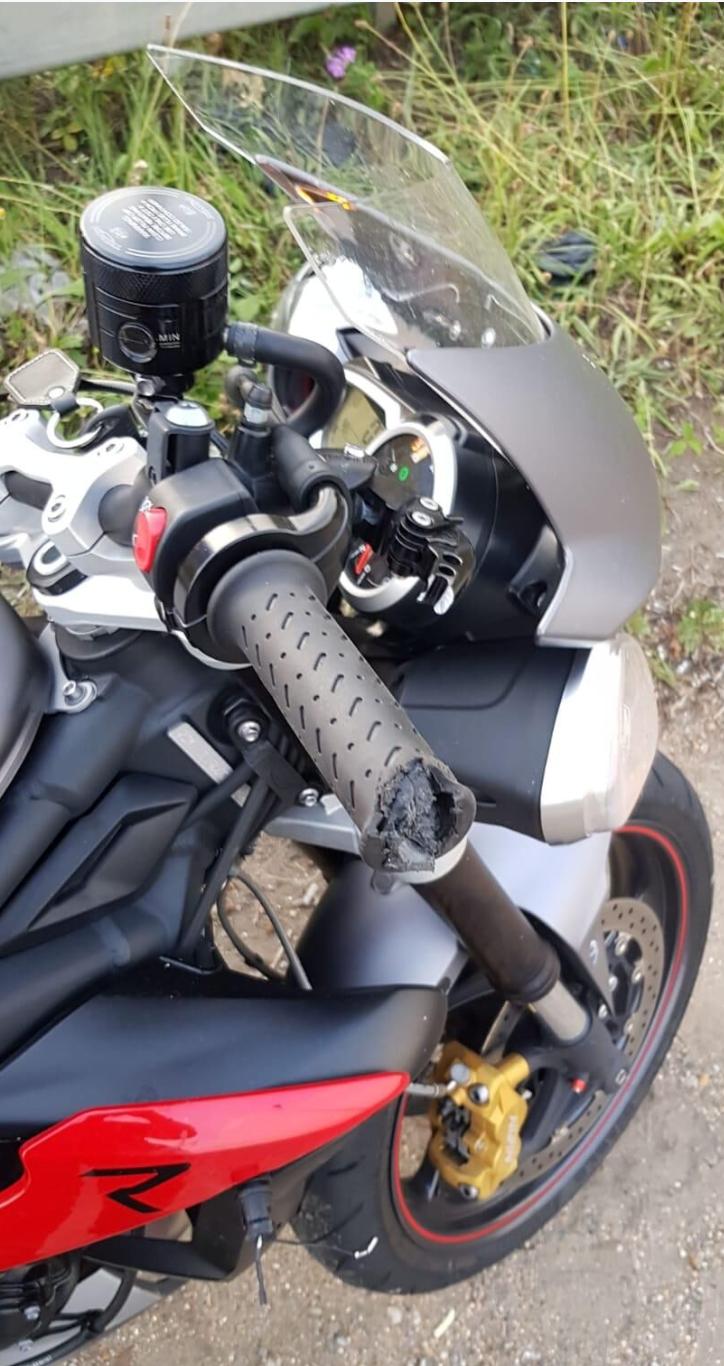 
Bike should be getting picked up today, and a replacement hire bike dropped off at the same time.

Everything has been going smoothly, first thing I did when I got my self sorted out was took pictures, and got all the details of the other driver then called my insurance to get the ball rolling / get breakdown pickup.

Next steps are to continue with the insurance company, get a new helmet / jacket and get back on the bike.

Edit: fuel pump this morning is making strange sounds too so deffo more damage to the bike that is unseen.

he gonna get prosecuted or anything?

glad youre ok. pity youll have to claim all that

Don't think there will be any prosecution, police were not called, and to be honest I just want the bike / gear replaced and Ill be happy.

From what I can gather he has admitted liability (or at least his insurance company are accepting my version of events)
My bike cover has also put me in touch with a personal claims firm that deals with motorbikes, so they are taking care of my injuries and damage to my gear. While the bike firm are going to either get the bike repaired or write it off.

From what I am being told, this is a no fault claim - so won't affect my excess, and I have no payments to make as everything will be claimed for the other party.

Really pleased with the speed of everything so far. Like I say, just waiting for the bike to be collected and the hire one dropped off.

Hey! time to update this thread.

So eventually the insurance was all sorted out, got the full value of my bike back which is good. No lasting injuries either which is better.

The biggest problem I have now is what bike do I get next? thinking_emoji.gif Really nice bike. Excellent power delivery, really smooth. Outstanding amount of torque pretty much through the gears, as I found I would pick up the pace even in 4th/5th/6th

Not too sure on the riding position, it was very aggressive and not quite what I was used to on the Street Triple R - Unsure if this is something I would get used to or not.

Think my plan is to re-visit the idea of a Daytona next weekend. Going to try and get a test ride of a Thruxton R 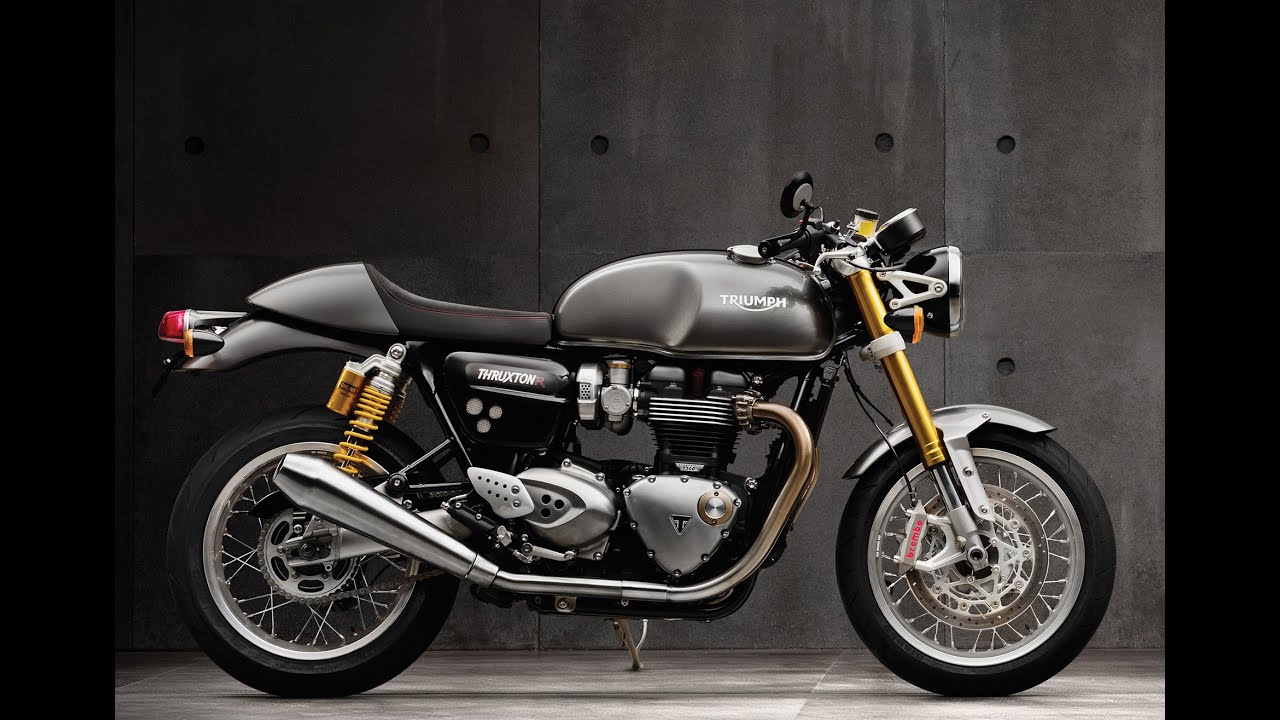 anyone else got suggestions??

I used to have a Speed Four, think it's basically the same as the Daytona (although they have probably changed in the last 10 years). Never had any problem with the riding position, even toured Europe riding for 10+hrs a day without any discomfort. Haven't ridden much else though so don't have much to compare it with.

Completely different kind of bike to what you're used to but have you thought about a cruiser, like a Harley 48 or an Indian Scout?

So its been a year and I am still no further forward with getting a new bike.

I did go out for another test ride on a Thruxton R on Saturday which was ace - just getting back on a bike was sooo nice.

I think if I am being realistic then getting the Thruxton might be the best option as insurance will be cheaper, however I have another problem that has been stopping me... My new flat doesnt have any designated parking. There is a gated compound where the bins are stored and there is plenty of room for my bike, but the area is 'managed' by UK-CPM and the last thing I want is to get a bike, insure it, park it then get a £100 fine.

The problem is I need to tell the insurers that it is off the road overnight or the premium is mental.

i have no idea how you could go a year without riding !