Going to watch episode 1 of this on my lunch break. I've been knee-deep in Witcher 3 goodness recently so hopefully this just adds to my love of the universe (my only exposure to it thus far been through the third game, not played the others or read any of the books).

Also pleased to hear that Yennefer is hot

I don't think I really registered that, or just assumed she was talking about the battle with Nilfgaard that you see at the start.

Jenu-All I Want For Christmas wrote:I've only watched as far as episode 4 so far myself and I've not had much trouble deciphering the timeline stuff.

It seems to have confused a lot of people from reading reviews and comments online which has surprised me as I really don't think there is anything that complex or confusing going on?

Episode 4 was the first point at which I realised they even were on different timeliness, which is what confused me, up until that point I'd assumed all the stories were concurrent, because of the way it cuts between them like they're all happening at the same time.

Now I know they are, I understand where they're all happening, I think, except where Yennefer's story is, as it doesn't seem to have linked up with the others yet. It was just more of a surprise when I suddenly realised that episode 4 of Geralt's story is happening years before Ciri's story in episode 1.

Not a big fan of this so far. It seems messy in execution in some ways. It hasn't been hard to follow the timeline stuff, but I feel like it could have been implemented better. Also strawberry floating hedgehog man.

Some of the actors are great though, and it looks really well produced.

Watched episode 1 just now, it was alright. There was very little background offered about who everyone was, particularly with the big battle that went on against the Nilfgaards and... whoever the defending lot were. Ciri's grandmother seemed about 20 years too young for the role, that didn't make sense. It felt as if I'd skipped a couple of episodes. I'm sure if you were familiar with the books or the first 2 games it'd probably make more sense but to the uninitiated it was a bit hard to follow.

Decent action though, plenty of violence.

I didn't like the bard at all in the 2nd episode. Not read the books, so no idea if he's in those or what his character is like, but in this he just felt shoehorned in for exposition (even acknowledging this in one really bad, almost 4th wall breaking, line,) and comic relief, that I felt like the show didn't need.

Warmed more to his character in episode 4, but he still feels a bit out of place.

Obviously Twitter chat about this show is almost exclusively people losing their gooseberry fool over him and shipping Geralt and the bard.

Yeah apparently that's Dandelion. They're using the original Polish name instead of the name from the translated books and games.

I don't get the point of opaque way they presented the fact it was different timelines.

They sort of 'hide' it without doing titlecards or some other signposting, but then make it pretty clear if you're paying attention from the first episode.

So they don't hide it for a "gotcha" moment, but also make it needlessly convoluted to spot.

I quite liked the way they did it. It's an interesting approach to tackling 3 separate back stories that need to eventually meet up.

Just nice to have something a bit different narratively, and layered in an engaging way. Some additional thought required from the viewer, on top of the general plot, but I don't mind that.

Having never played the games I enjoyed this for what it was. The first few episodes were hard to get into and I’m
Exactly the same as those above had no idea about the time differences until half way through the series.

The last episode I really enjoyed and thought it really started to build towards a solid series.

Wait, are there different timelines in the first episode?

Ah ok, I don't even remember Renfri saying that - thanks for clarifying.

Ah ok, I don't even remember Renfri saying that - thanks for clarifying.

I think it was during her first talk with Geralt in the woods - it was just a passing comment "She can do X, but I can't do Y"

Yeah as I said it's not highlighted/signposted, but neither is it particularly hidden. I don't get why they did it that way.

Timeline Guide for Season One, Spoilers - 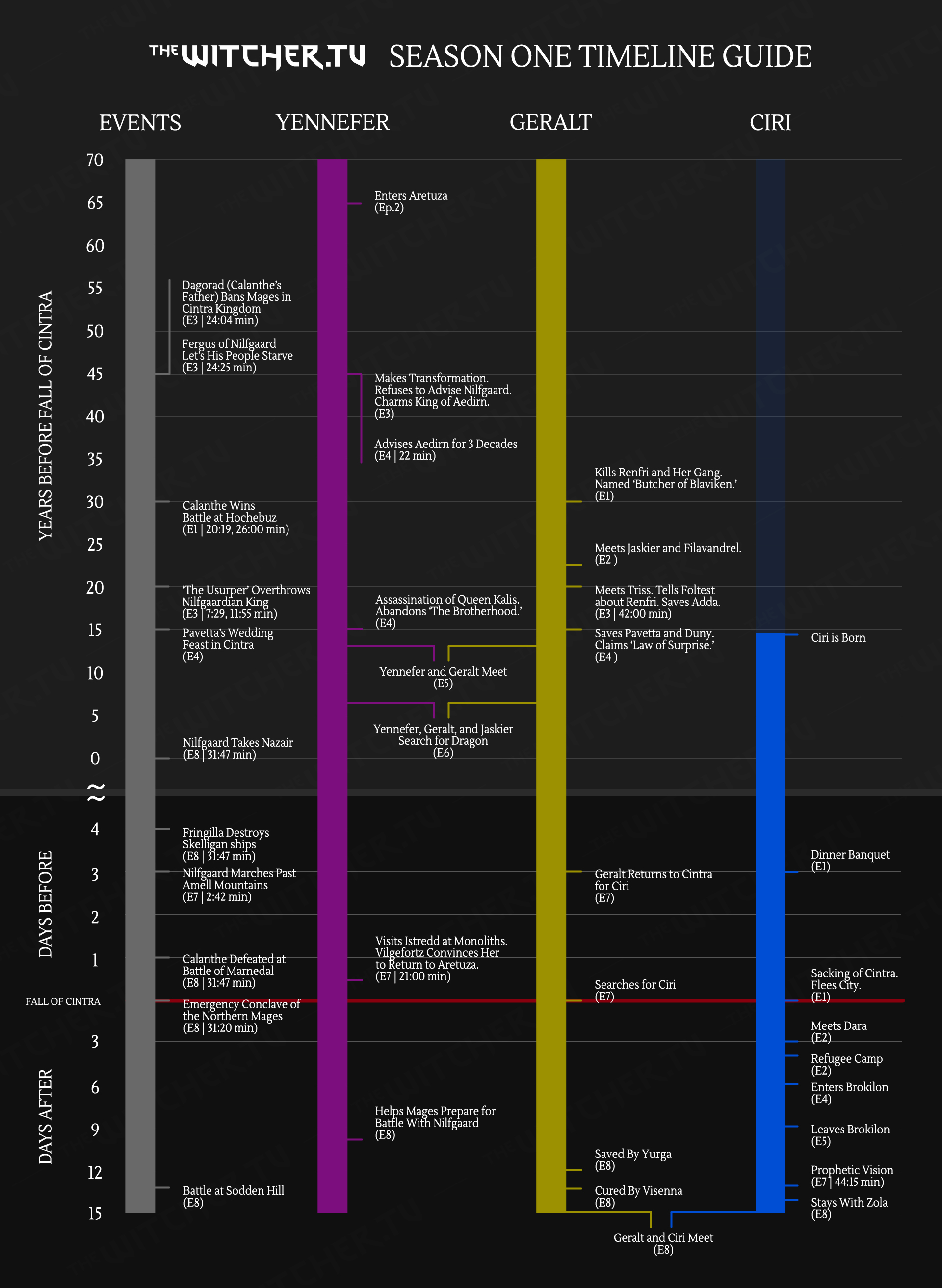 This is part of a problem I have with a lot of fantasy fiction, in that they may as well be saying PLACENAME just like that, because so many of the names and places mentioned just wash over me. Especially when they're made up names from some fictional language, so I've no point of reference for them at all, it's like I've forgotten the word by the time they've finished speaking, so if it comes up again, I just don't make the connection.

The timelines thing was annoying once I realised that there was fuckery going on, but I'll hold my hands up and say I probably wasn't paying attention.

The thing that got me was how odd and completely weird some of the dialogue and character interactions were, but then I read the book and realised that it was a very faithful adaptation of what is also gooseberry fool writing in the books.

To be fair to the books, they are an English translation of the original Polish text so maybe something is lost along the way. They do veer quite a bit though from seriousness to fairy tale. It's quite odd.

Yea that’s fair, but I definitely think that the show was a great opportunity to filter the dialogue through a native to make it a bit less Google Translate, and they didn’t take it.