mic wrote:Would you accept £20million with no admission of guilt, knowing that he would certainly go on to do it again to some other kid?

Or would you want a full criminal investigation?

Or, take the money and then wait till he's dead so you're not breaking any legal agreements.

So, as a parent, the idea of a sexual predator being punished for abusing your child wouldn’t be a factor for you? You’d take the money, happy to bismirch their name once they’re dead? I suppose it’s a lot of money...

But that’s not what happened. Nobody who has been paid off has now come forward to confirm the allegations. These are fresh accusations (from 2013, anyway) which were dismissed at court because the claimants took too long (don’t we have a law preventing that?).

mic wrote:Would you accept £20million with no admission of guilt, knowing that he would certainly go on to do it again to some other kid?

Or would you want a full criminal investigation?

Or, accept 20 million and not have to face the best legal team money can buy and a potential jury of people who view it as the biggest and best pop star in the world v some random person.

Don't try to pretend it's an easy choice for a childhood sexual abuse victim to make.

I think it was the parents who made the decision and, as a parent, my first concern would be the protection of future potential victims, especially if he had personally hoodwinked me into letting him sleep with my child. Not an easy decision, more of a no-brainier.

Also, if I took the money, everyone might think that was what I was after, the next logical step being that we made up the allegations.

I mean, it’s not as though people don’t make up allegations of rape and sexual abuse.

Looking online less than 1% of rapists in American actually get convicted, so what chance does a random kid have against the world's biggest popstar when going to court, when even most scum without the strawberry float tons of money and gooseberry fool lawyers get away with it?

So it's decided then We consult Holly.

Nah, Holly has the actual IQ of 6. 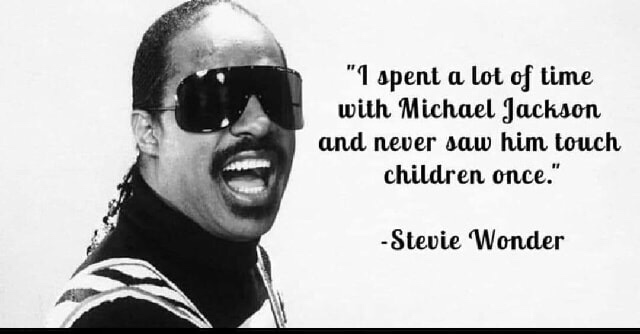 I don't get this at all. I thought it was a known fact he was a kiddie diddler.
No one could, and still has, proven it. So what's changed?

Gemini73 wrote:So it's decided then We consult Holly.

So what is it?

1cmanny1 wrote:I don't get this at all. I thought it was a known fact he was a kiddie diddler.
No one could, and still has, proven it. So what's changed?

Allegations made in 2013 against the Michael Jackson Foundation in a 650 million dollar lawsuit, presented after his death and dismissed from court for being made too late, were instead made into a documentary detailing historical abuse from two alleged sources, although they provide no evidence or witness accounts beyond the shocking details of their own experiences.

I want to hear about more known facts.

By the way what's an unknown fact? Isn't that the same as a question?

By the way what's an unknown fact? Isn't that the same as a question?

An unknown fact is something that is true but nobody knows about. So for instance I know for a fact how large my penis is, but it’s unknown to everyone else as nobody has made a microscope powerful enough to see something that small.


Footage of Michael Jackson in a disguise shopping for rings with a young boy at Zales jewlery store in Simi Valley, California has been uncovered. Star Magazine thought the ring was because Michael was planning to marry back up singer, Sheryl Crow. Michael and Sheryl never dated or got married. The young boy seems to be James Safechuck, who lived in Simi Valley, California. In the Leaving Neverland documentary, James also talked about how he would go ring shopping with Michael and Michael would sometimes wear disguises and they would pretend they were shopping for girls when it was really for James. James also showed rings Michael gave him, including one that was used for a mock wedding ceremony between them.

Here is another news report where someone who worked at Zales talks about how the police were called because Michael seemed very nervous and kept adjusting his mustache and was in a disguise, so they thought he was a robber. The whole time the 12 year old boy was talking for the both of them because Michael didn't want to talk because his voice would be recognized. The police let Michael go when they realized who he was and he gave the security guard at Zales an autograph.

Come off it, who here hasn't bought jewellery for a 12 year old boy they were secretly molesting? Totally normal and definitely not something a predatory pedophile would do.