Anything to do with games at all.
Post Reply
3771 posts

There has been a hotfix sent out today

Fixed an issue that could cause bases to be buried underground. This was the result of the planet surface moving unexpectedly. Affected planets have been restored to their correct, pre-Origins state.

Figured I'd give this yet another chance now that the latest update has come out and you know what... it's great

Managed to get off my freezing Hoth-like starter planet and after visiting a couple of toxic wastelands I stumbled across a paradise planet with only minor toxicity, which I have now claimed as my own and named as Preezy Prime

Built a rudimentary wooden base and a couple of technology bits and bobs so I'm all set to properly explore and upgrade all my gooseberry fool. Going to really try and commit to playing this on the regular so that it gets the attention it now deserves. Jawa would be proud

I was excited to try the new stuff but came away disappointed with bugs.

My main base on my favourite planet is now floating high up in the air, I tried to create some ground up to and around it but every time I leave the planet and return it glitches and partially disappears again. My co-op buddy can no longer travel to any of my bases either.

Also, I was flying to my freighter and the game glitched me inside the freighter model - I was constantly taking damage but unable to escape.

Some of the missions remain broken for me too.

I'll maybe give it another go sometime in future.

I love the colour palate, I mean bland is so now. There has been no colour adjustment on the image, the world looks like this. 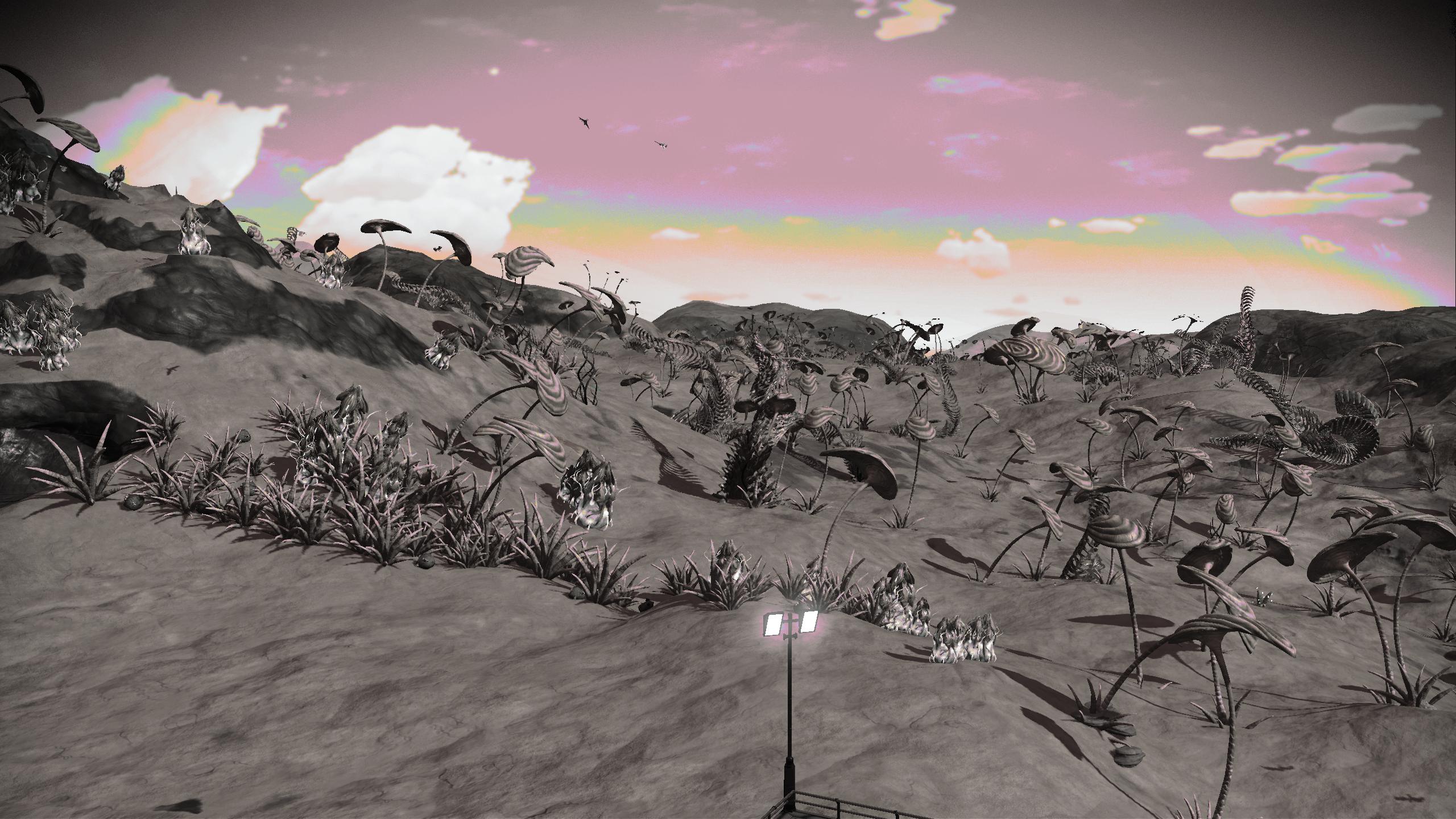 Xeno wrote:I love the colour palate, I mean bland is so now. There has been no colour adjustment on the image, the world looks like this.

As bland as my own life

I landed on this planet last night that was a super-hot one and the whole environment just looked absolutely boiling, everything was shimmering and hostile, just great

The devs should adapt the Among Us, Mafia etc concept to this game, for a silly $5 spin-off title.

I FINALLY have flown to a new galaxy, or whatever. I think all the recent patches for me don't have much impact as they deal with high end stuff that's not wihin my grasp.

That all said, it's running (and looking) remarkable these days. I have it on an External SSD and it could be something to do with that but it's all rather lovely to look at AND play.

I loaded up one of my old saves, fell through the planed and ended up back where I was supposed to be but my little base has completely vanished

More info from PS Blog which is the same on Xbox Wire, besides DualSense haptics/PSVR info. Sadly PSVR doesn't get an upgrade yet...

Here is a closer look at just some of the features and upgrades that players can expect in the PS5 version of No Man’s Sky.

Haptic controls: From the satisfying feeling of firing your boltcaster, to the gentle nudge of a building part slotting into place in a space habitat or the firm click of the trigger in your interstellar ship – haptic controls allow players to feel immersed in an alien world as never before.

Fuller worlds: Next generation hardware allows No Man’s Sky’s procedural generation to create lusher, richer and more densely populated universes than ever before. Planet surfaces are even more detailed, with thousands more rocks, alien grasses, and exotic flora on screen at any time.

32 player multiplayer: For the first time on console, up to 32 players can join forces to build, survive, fight and explore the galaxy together.
Advanced audio: Immersion has always been a pillar of No Man’s Sky. Thanks to PlayStation 5’s Tempest 3D AudioTech, players will be able to soak in the ambience of an alien planet, or feel a ship fly overhead like never before (You can find out more about PS5’s 3D Audio here.)

4K* at 60FPS: On PlayStation 5 players can experience the universe in pin-sharp detail at higher framerates.

Vast base building: Players can now work together to build huge off-world colonies, with the ability to construct and render far more vast and complex bases on screen.

Warp-speed load times: Explore the universe instantly with 5-10x reduction in loading times. On PS5, you can warp from solar system to solar system in an instant.

Crossplay: PS5 explorers will be able to join together with other adventurers on all other platforms, including previous generations.

Upgrading from PS4 to PS5: Not only will previous owners of No Man’s Sky on PlayStation 4 be able to upgrade their game to PlayStation 5 at no extra cost when PS5 launches in their territory, but their progress can be carried across to their new console.

PlayStation VR: No Man’s Sky is fully playable in PS VR on PlayStation 5 by virtue of its backwards compatibility functionality.

An evolving game: Just another step on the evolution of the best-selling title, No Man’s Sky Next Generation will come preloaded with the previous four years of huge upgrades from day one. Join in the journey at our most important moment yet.

Our next generation journey begins. We hope you are excited to join us.

Nie to know I'll have a free game when I finally get my PS5, and it looks like the improvements they'll make with the next gen versions are pretty impressive.

Seamlessly transition your No Man’s Sky journey to the next generation. Xbox One saves are automatically compatible with the next Xbox generation, and PS4 players can upload their save data in-game for download on PS5.

Glad to see they've really turn the game around, I need to go back to the game if I get a PS5.

So if you own the original version it will get upgraded for free on next gen consoles? Didnt really get into it and left it unplayed on the ps4. A free update would be sweet and a great incentive to get me to give it a proper go.

I've not played for a year, but I've got 400 odd hours in a PS4 save, and I'll be getting an Xbox Series X for now instead of a PS5. I might start a new save on Series X as I think it's on Game Pass, just to get used to all the changes since I last played.

Just tried this out in VR, and it's incredible. It totally suits it, and I was surprised to find the Oculus touch controllers are fully integrated, with correct button prompts, and intuitive mapping. I'd assumed this would still require a control pad to play in VR, so happy to be proved wrong.

It adds a real sense of scale, too, playing this way. Geographical features feel a lot bigger, and the equipment you build feels really weighty.

Flight controls feel so weird, though. Controlling a virtual joystick, with no feedback at all is real odd, and I kept finding my hand had drifted well away from the the in cockpit controls, and so the game just had my character let them go, and I was no longer in control of the ship.

Really impressed though. With this and the way the game runs so much better with my new CPU and RAM, I'm looking forward to getting properly stuck in, especially as there have been so many more updates since I last played.

Travelers are now able to adopt the creatures they encounter and form close bonds with them. They will travel side-by-side with you as you adventure through the universe, both as a friend and as a valuable aide on your voyage. Train them to scan for resources, mark out hazards, provide light, hunt dangerous fauna, find settlements, excavate buried treasure or even mine for materials with their own shoulder-mounted mining lasers.

There are going to be so many space dick pets.

This is looking great now, and I'm tempted to jump in on PS5. Currently £40 on PSN though.

Am I right that I can just buy a used copy of the original release of No Man's Sky on PS4, and get access to the latest revision on PS5? Or do I need the No Man's Sky Beyond release, or something newer?