Anything to do with games at all.
Locked
5441 posts

Had my first 'proper' gaming session using steam link tonight. Played the talos principle using my Xbox 360 controller and it was a fantastic experience - crisp native res graphics and absolutely no lag, I totally forgot it was streaming, it felt just like playing the ps4 or something. 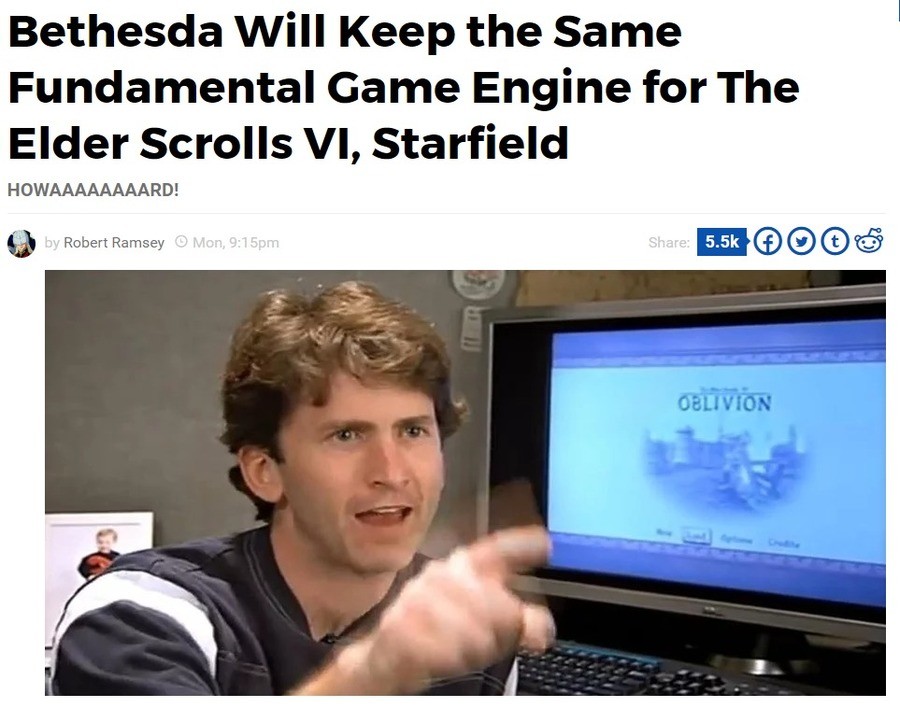 They really have managed to learn nothing from the debacle that is Fallout 76.
If they do indeed use the same engine it's going to look bloody ancient even compared to games made on this gen let alone next gen RPG's.
I know it's expensive and a lot of work but a new engine is just bloody needed or the next games are just going to fail massively and I have no sympathy for them when the only reason to use the old engine is to save some cash at the expense of the quality of the games.

It's insane considering the Elderscrolls series is probably one of the most profitable in all of gaming! You would think money would not be a significant hurdle here, especially considering they have people from id software they could also draw on. I mean they've released Skyrim on basically every system there is, I'm sure they can afford it.

It's also quite odd when we see other smaller companies starting from scratch with new engines because they realise it's just something they have to bite the bullet and do. It would be interesting to know what other companies of any size still use as many old building blocks for games as Bathesda.

Also how much could it possibly cost anyway as it's not like they don't have enough talented staff to shove into a team dedicated to building a new engine that can then be used for multiple next gen projects over the next decade.

This is going to be a slow motion car crash for a series that has been loved by many and simply been left to rot. The many downsides of the tech they use has been blown wide open for years now and we all know what the limitations will be for the next games and many people have just decided that they simply wont accept them any more.

Assassins Creed Unity is free until the 25th becauss of the Notre Dame fire...

And it looks like the site is getting absolutely smashed because of it, cant connect at all.

Just got my copy, thanks for the heads up.

Does anyone have any experience of using Playnite or Launchbox? The vast majority of my library is on Steam but it would be nice to have my GOG library and now AC: Unity on one launcher. I wouldn't want to lose any of the tracking or achievements that each service has though.

Dowbocop wrote:Just got my copy, thanks for the heads up.

Does anyone have any experience of using Playnite or Launchbox? The vast majority of my library is on Steam but it would be nice to have my GOG library and now AC: Unity on one launcher. I wouldn't want to lose any of the tracking or achievements that each service has though.

I use Launchbox for my ROM collection and my steam stuff is all plugged into it as well.

It's literally just a front end for launching stuff and personally I think it works really well. There's a lot of different features, but there's plenty of guides on youtube around how to set it up. Its updated fairly regularly as well.

Using it for just PC stuff would work and it's got a built in DOSbox installer for older games.

EDIT: I should add that I'm using the paid version of LB, but the free version is really usable and for me was enough to convince me to drop the cash on the premium version.

The only drawback I have with Launchbox, is that if you use the Steam Library importer, it will import everything you have and at the moment there's no way to tell what is/isn't installed. It's minor and you can fudge around it, but I do find it a little annoying.

Got my steam controller today (a friend has lent me his on a keep it if you like it basis). Looking forward to trying out non controller games via steam link such as ftl and emulators.

My mate just airdropped me a decommissioned Dell workstation as a gift as he works in IT at a game dev business.

Jesus. This thing runs everything I've tried with insane fps, like no fps drops ever. The thing supports 4 4K monitors.

It's going to be used mostly for CAD work but what a bomb, I'm suddenly back in the PC gaming world. What have I missed out on? I dropped out around the time if crysis 1 as I couldn't keep up anymore and that was 20fps. Going to install subnautica for sure because it was DX11 only and I can play elite again since they dropped 32bit as well as dx10 support.

I can probably get VR some day as well. Amazing as I've not had a new GPU since 2010 and I still work on an 8 year old MacBook.

The thing is also absolutely tiny and silent, really nice heatsink. It sucked being priced out of PC gaming thanks to Bitcoin. I remember when a decent GPU cost £75.

what a legend your mate is!
i console myself with the knowledge that i barely have time to play games anyway, so i dont a new pc as i have a massive old games backlog to occupy me

Wow! That's like a dream, Gecko - what a fantastic surprise! I'm pressing C to clap!

Hah that's great, and highlights the brilliant thing about pc gaming in it's true backwards compatibility. You've been shut out of games because the hardware got old, and now you've got a new machine they all come back to life looking and running better than ever

Man, I wish I had these things called friends.

Pedz wrote:Man, I wish I had these things called friends.

I'll be there for you

Pedz wrote:Man, I wish I had these things called friends.

I'll be there for you

Do I have to be there for you too?

When the rain starts to pour

It's a lovely gift but as companies just throw these things out or auction them after 3-5 years as tax writeoffs it's just a case of fudging some paperwork. Same guy gave me some amazing microphones as well several years ago.. Sony threw them away in a skip, along with a blade server which he kept and we still use for LANs with new parts. It's amazing what sort of things are surplus to requirements some places and are easily coveted by someone else.

So far I've downloaded Alan wake (which actually ran fine on old hardware I just want to continue it), crysis 1 and 2, Stalker, Metro 2033, GTA 4 (also ran OK but I can probably install some stupidly demanding realism mods), bioshock 2 remastered, borderlands remastered (got both of those automatically added to steam), bioshock infinite. Should also try skyrim.

There's loads of games I just haven't bought because they would run like gooseberry fool. Girlfriend has a ps4 now but this would probably be better. My last hardware purchase was Wii u lol

I'll probably check some stuff out in the summer sale but the main thing is I can join in with LANs again without being locked out by hardware. There don't seem to be that many exclusives these days.

Can just plug in the dualshock 4, it's officially supported by steam big picture, right?

I fancy Prey as well, the demo was great on ps4 but those sweet, sweet PC prices.