Anything to do with games at all.
Post Reply
113 posts

I wonder if, Winckle, you perhaps hadn't realised that the link was a copy of paid-for content? There are quite a few option files around; some free and some payable. I will be using one of the free ones when available.

I kind of agree with the idea that maybe we shouldn't promote a pirate copy here in GR - even though it may have been unintentional to do so.

It was not unintentional. PES Universe are on shaky ground as it is charging for that content. If Konami can't sell you a product with the badges of Premier League clubs, why can they?

Winckle wrote:It was not unintentional. PES Universe are on shaky ground as it is charging for that content. If Konami can't sell you a product with the badges of Premier League clubs, why can they?

It takes many, many hours to make the kits and badges. For PES fans, the ability to load up accurate kits and images is wonderful! I have personally used the other free options in the past but I do recognise that a ton of work is involved. I believe that PES Universe say the charge is for their time rather than the actual end product but, regardless of that, I feel that promoting pirate links in a GR thread is probably not the right thing to do.

Please don't bring political arguments about copyright theft into a game thread. Maybe you could make a separate thread about the morality of charging for PES option files?

Please don't bring political arguments about copyright theft into a game thread. Maybe you could make a separate thread about the morality of charging for PES option files?

Winckle, I'm not gonna waste time arguing with you, especially when you're being needlessly antagonistic and trying to provoke me by using the words that you have. I was being pretty reasonable and you've responded like an ass.

The bottom line is that you're promoting piracy in a GR thread and, regardless of your view and my view, that"s probably not a good thing for the forum.

I caved and bought this.

First impressions are that I really like it! The new camera angle is excellent, I don't have to rely on the radar as much. The graphics, particularly the lighting effects, are excellent.

I also feel like you don't have to rely on pace as much. Passing the ball around, trying to create an opening feels like a very valid way to play.

Its definitely been sped up since the demo and i hope konami patch this. Just feels a little too fast with some of the animations now being unrealistically fast. Apart from that, the game has been improved from last years effort and looks amazing now.

Yep, although it does that annoying thing where if a player is injured it replaces them with his backup. So now when I use Liverpool, I have to keep switching Adrian and Alisson.

Played the demo today, thought it was wank. Graphics were good but that's about it. Gameplay was floaty and... off, lack of commentary was odd for a demo showing off the game and as ever the presentation skills of PES was stuck in the PS2 era. I loved PES2016 but this doesn't look to have moved on at all from that.

Thanks for your wrong opinion. The fifa demo is decent, but its way too fast to be considered proper football. Neither are great imo which is a shame.

The state of this thread

. I had an idea that this year we may get some decent chat and matches going. Was wrong.

gamerforever wrote:Thanks for your wrong opinion. The fifa demo is decent, but its way too fast to be considered proper football. Neither are great imo which is a shame.

Who said anything about FIFA? I haven't even played the FIFA demo yet (downloading now).

. I had an idea that this year we may get some decent chat and matches going. Was wrong.

Don't get me wrong, jawa, PES has its appeal and i know plenty others who'll enjoy it, you included. I just struggle to see the justification for shelling out for something that I don't think would do enough to scratch my personal footballing itch. I'm still playing FIFA18 for pity's sake, and I can't see myself getting another football game for the next year or 2, it does what I need it to do when I have an hour free in an evening.

That sounds more sordid than I intended

ended up playing minecraft instead

The modding scene has started to get going on PES 2020 PC.

I've restored Anfield to all its glory. 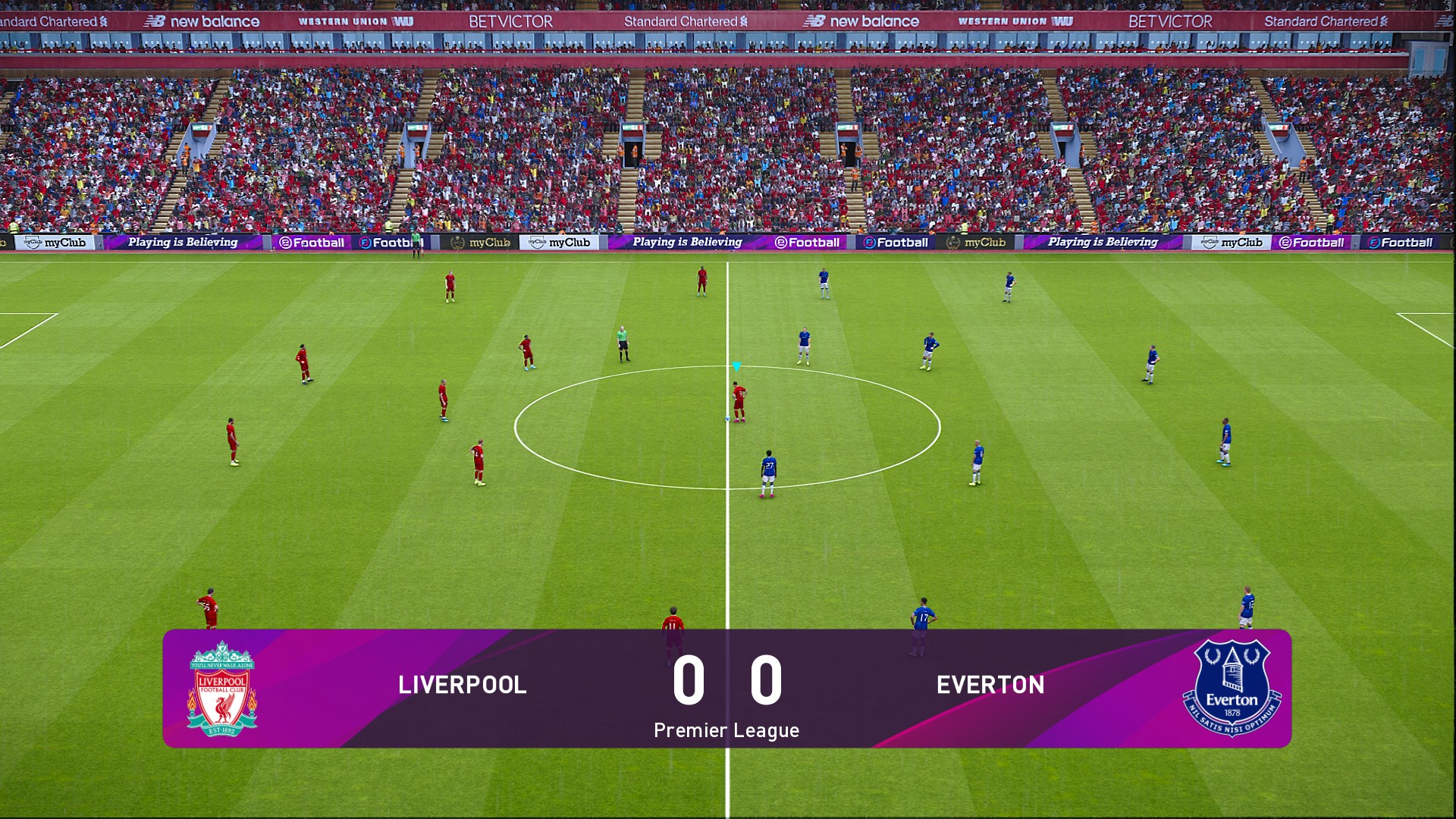 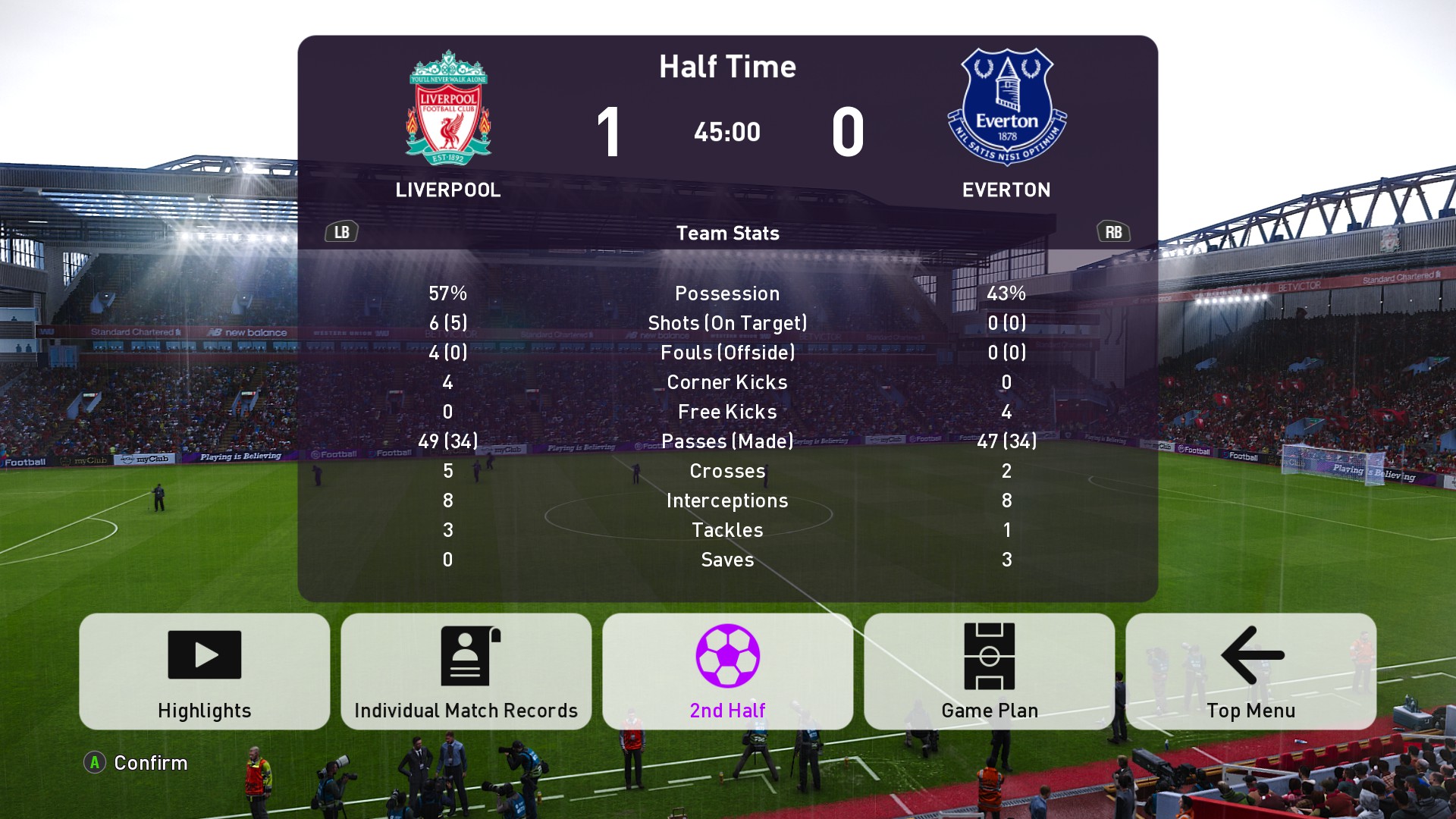 I’ll be picking this up on Thursday, played a couple of games at a friends house. The dribbling is lovely and the lack of licenses is not an issue when the gameplay is so far ahead of FIFA. It actually plays like a real football match, to me at least.

And er, my defence is not the most co-ordinated.

I scored a nice team goal early on and tried to hold on till the end but conceded very late to make it 1-1. I think the simulation of football this year is really sublime.

Played a bit of this and have settled on the stadium cam, but with a lower view which appears to make the speed look a bit more realistic. Sounds silly, but the speed was my main gripe with the game. Different teams and leagues play so differently. I had a few serie a games and what struck me was how deep defences were compared to the faster paced premier league teams. I really feel that the presentation could be improved a lot and konami could offer customisation options in the future like uploading chants, game intro music (so we can add the champions league music if we want) and maybe an option to add ourselves into the game as a player. I haven’t had a chance to start a master league yet, but will try have a go.

Had some games on fifa, but unlike previous years, i do not feel the need to get both. Only time will tell!