The enemy is both strong and weak. Stupid pathetic Labour can't govern, but also look how much damage they're doing to the country while not even in charge!

captain red dog wrote:Mick Lynch, from the interviews I have seen, seems to be just a normal working class guy fighting for workers rights. It's brilliant when someone like him can show up the Westminster political bubble fools. However, his time on air is limited beyond belief because even the BBC have a nasty allergy to anyone working class.

Does anyone know what the offer is from the rail companies and what the RMT is asking for? I've looked high and low, but all the articles on mainstream media don't go into details aside from current pay levels for some drivers and talking about disruption.

From what I understand the RMT are offering a 3% pay rise (So 7% below inflation) but it comes with redundancies as well.

The RMT would probably settle for 3.5% if redundancy was taken off the table. In my experience, union workers are conditioned to expect around 3.5% payrises even with inflation. My union were asking for 8% in negotiations, but every member I spoke to seemed to accept that we'd probably settle for 3.5-4% as long as the T and C changes were removed. As it happened, eventually the company agreed to 4% after we rejected two of their offers on ballot.

This really does seem like the rail companies are just flat out refusing to negotiate in good faith. Also, there can be no doubt this needs Government involvement as there should be a national plan on how to get rail use back to pre-pandemic levels, or a plan of how to effectively support a lower capacity service.

The government position is incredulous given what happened at P&O.

Grumpy David wrote:Even for the DM this is brazen. 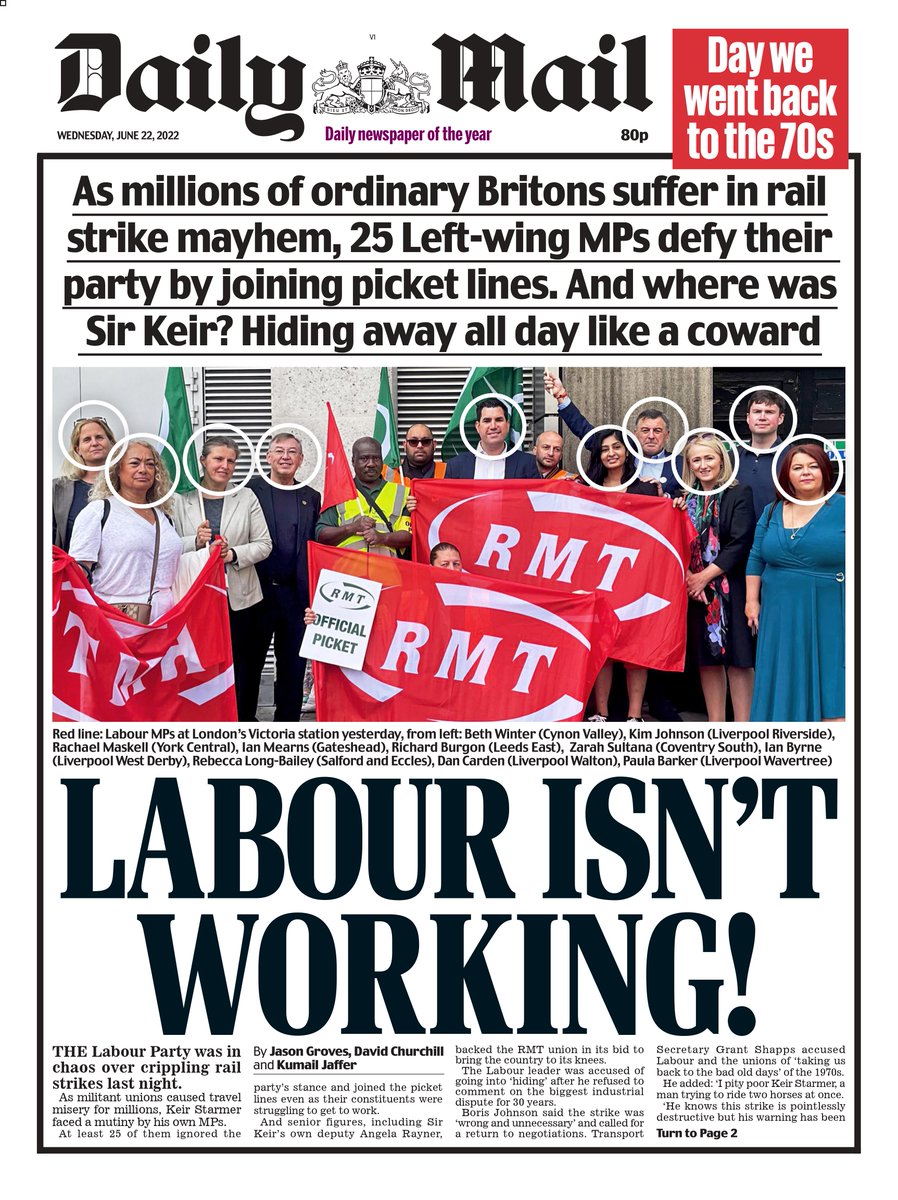 Embarrassing from the Mail, but expected nonetheless.


Check out my YouTube channel!
One man should not have this much power in this game. Luckily I'm not an ordinary man.

Subscribers of The Times are complaining en masse on their subscribers-only Comment section after revelations the paper spiked an unflattering story about Boris and Carrie Johnson following its initial publication.

Comments criticising The Times on its own articles have received hundreds of up votes from readers.

On Saturday The Times removed an article from later editions that claimed Boris Johnson had attempted to get his then-mistress (now wife) Carrie Symonds installed as chief of staff when he was foreign secretary.

On one published article, entitled “​​Boris Johnson back at No 10 after minor sinus operation”, the top comment asked: “On a more important subject does any reader know why the Times bowed to No 10 pressure and pulled the story which alleged that Mr Johnson had attempted to install Carrie in a £100,00-a-year job in the foreign office at a time when he was conducting a secret affair with her?”

The second comment, with nearly 400 up-votes, said: “Not a peep from this newspaper, or Dominic Raab, or the Free Speech Union or the other right wing client journalists about how the government effectively dictates what a supposed free press can or cannot publish. This is incredible.”

On another article, “Boris Johnson could get three ethics advisers instead of just one”, which has over 100 comments less than 12 hours after publication, the top comment with nearly 100 favourites asked: “Yes, but what about the ethics of The Times printing a story about Johnson trying to give a job to his then partner, then pulling it after a call from No. 10?”

Another said: “Carrie might be up for it, but it’s unlikely we’d read about that in The Times.”

YouGov wrote:The Sun the least trusted name in news according to YouGov survey

According to a UK survey of 2,410 people conducted by YouGov in February 2022, The Sun is the least trusted source for news.

The report found that The Sun was the UK’s least trusted news brand out of the 15 UK titles included, with 67% of people saying they didn’t trust its news output versus only 12% who did.

BBC News and ITV News shared top spot for the first time, with 55% saying they trust both, though ITV News had a higher proportion of those unsure at 27% to the BBC's 19%.

GB News came bottom of those with a television-based output. "Ummm, tell everyone that Russia will love this?"

Weird really, The Tories seemed to love the Russians before...

He says without a hint of self awareness. They took us out of the EU. That's only good for Russia.

Labour are distancing themselves from him, lol.


pjbetman wrote:That's the stupidest thing ive ever read on here i think.

Rupert Murdoch held a party this week. It’s unlikely you’ve heard much about it.

Beyond an aside in the Mirror’s report on the Conservative Party’s summer fundraising bash, which also took place on Monday night – “[Boris Johnson] was later spotted, along with much of the Cabinet, at Rupert Murdoch’s summer party at the Serpentine Gallery”.

And as a small item in the Evening Standard’s Londoner’s Diary – “… some went to the Conservative V&A summer party, but one said the best ticket was a Rupert Murdoch bash at the Serpentine. Boris Johnson, Michael Gove and other ministers attended”.

These people are so thick

Imagine the papers weren't on their side.