Not even a warning or ACCUMULATION OF PREVIOUS INFRACTIONS. 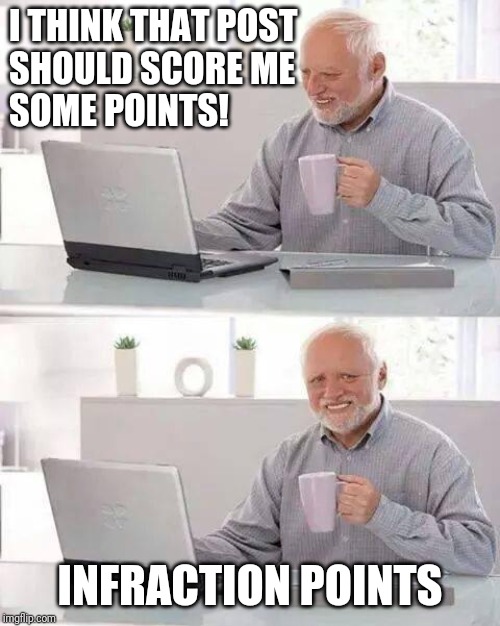 It's really tempting to find a post with a warning on ResetEra and quote it replying that image.

Lagamorph wrote:It's really tempting to find a post with a warning on ResetEra and quote it replying that image.

Please do, and be sure to link us to the thread before you get banned.

I thought the whole thing about Niche Gamer is for him copy other people's work. Was he being bigoted as well? The word bigotry doesn't fit the context of this at all, if not.

YOU HAVE BEEN FINED 1 INFRACTION POINT FOR VIOLATION OF THE VERBAL MORALITY STATUTE.

BANNED FOR USING BIG WORDS THAT I DON'T UNDERSTAND

what the gooseberry fool happened? I just wasted half a roll of TP in disbelief, this gooseberry fool defies logic and human anatomy. All of my experience had led me to believe that I was in for a messy cleanup and I just can’t process how this could have even occurred.

I currently have diarrhea in a walmart bathroom. I was waiting on the stall to open and it almost squeezed out in my pants. I thought about using the urinal but as luck would have it, the stall opened just in time.

I don’t know what a bog roll is

Some infraction points needed in that thread.

Not that he would have changed his answer, but they couldn't have asked about the Switch, too?

He's welcome to his opinion. As long as he doesn't propagate that awful pc master race bullshit.

lol he's an actor, he should stay within his domain

honestly don't care what that creep thinks. not surprised he's primarily a pc gamer given his MeToo remarks. Also, The Witcher 3 came out in 2015, it's time to move on.

I don;t subscribe the colt of personality so his opinion is just that, his opinion. No more or less valuable than the rest of the member of this site.

Now if he said he prefers certain methods of acting over others, then his musings carry some weight as he's in that field, professionally.

But, I always get weirded out when people parade celebrity opinions on things like they matter. LIke, Celebrities are people, they don't have magical space knowledge that amkes their opinions more correct, especially if their field of exprertise is unrelated. I understand that most people are just doing it for memes, and video game platoforms ultimately don;t matter. But giving celebrity opinions undue importance is exact hackney gooseberry fool people use to spread bogus like anti-vaxx theories all the strawberry floating time. Just cuz some starlet somewhere said something about natural medicine, people suddenly go around giving their children bleach. We need to develop healthier, less culty attitudes towards celebrities is what I am saying.


Hexx wrote:Ad7 is older and balder than I thought.

Only for fleshlights and butt stuff.

and what about socks, do people actually use those? is that why you can never find a pair?

Why not use moisturizer for a fresher, younger feeling dick.

Well, I understand that a dry rub is fine most of the time, but you can't beat a nice marinade.

Someone posted an article on Global Nintendo once about dog slobber, well, actually, it was basically a guide on how to have sex with dogs (there was a lot of slobber involved).

It actually came from a B3ta newsletter (this was over 10 years ago now), though while it was one of the funniest things we ever read, i do wonder (now looking back) whether reading it was even legal as it was just so strawberry floated up.

i was on a call with my girl while taking a dump, and told her well i’m done, call you back after i wipe and shower. she’s like you already showered today, you’re going again? i’m like yeah, i do it every time i gooseberry fool. otherwise don’t feel fully clean.

she was shocked as if i’m the only one in the world who does this. took screen shots of answers from google and showed it to her too and she still kept calling me weird for showering

why is being clean considered weird in our society? washing yourself is weird, but rubbing gooseberry fool with dry paper is fine? not showering should be called weird. walking around with your dingle berries

I'm convinced these people have the equivalent of a cow pat smeared on their arse cheeks after a gooseberry fool.