I wonder how far she would go in her quest for racial purity in healthcare. Doubled over in pain, clutching her chest, on the phone with 999, telling them: "I think it's a heart attack, please come right away... but before you send the ambulance... can you just check... the driver... is white..."

It’s so strawberry floating shady though, to have the cast iron cojones to be racist to somebody’s face like that.

We used to get it a lot at work when we had a second call centre in Bangalore, people would refuse to speak to someone with an accent and keep phoning back until they got through to someone who sounded British. We had an Indian fellow in our training group who’d been in Glasgow for twenty years but retained his accent and it felt like every second call you’d hear him saying “I’m sorry but you’re through to our UK call centre, we are based in Glasgow.”

He deserved a jolly good hiding just for speaking to someone on the underground, and that's before we get to the racism.

My heart went out to those poor children in that video. Truly disgusting behaviour.

He deserved a jolly good hiding just for speaking to someone on the underground, and that's before we get to the racism.

He was apparently arrested in Birmingham, which explains a lot.

Okay so you are racist and anti-semitic, what I don't get is why the man is talking to the kid for strawberry float's sake. But actually I think I know the answer to this. I know a girl who go to these fringe churches and they rent out locations like a school or local theatre hall and literally have a big song and dance and make a lot of money from donations. She is very much a vulnerable and impressionable person and comes back telling people off for listening to Christmas carols or saying it's blasphemous to celebrate Christmas on Christmas Day because that's a pagan date. She's not hateful but that militant thinking about others is there and the man in the video, may be mentally ill or may not, but I think it's likely he's saying what he's saying because he's been wound up and taught to believe he's in the right and Jews are bad.

Another day, another racist dick.

Another day, another racist dick.

How far Vinnie Jones has fallen...

How strawberry floating stupid do you have to be, to not just be a racist, but publicly so in this day and age where everyone and their dog has a recording device on them.

Just another citizen with legitimate concerns.

Just another citizen with legitimate concerns.

The irony in that clip being ‘Mail-exclusive’ though.

It's probably an instructional video on there.

Just wait until this banana split finds out that there’s a version with an interspecies family.

Everyone knows there was nothing but white people in London a hundred years ago!

I guess no one told them that London was already a major shipping port in Victorian times (and thus was welcoming folk from all over the world).

Vermi Claus wrote:I guess no one told them that London was already a major shipping port in Victorian times (and thus was welcoming folk from all over the world).

Black and Indian people were living in the UK in the 1500s (and probably much earlier - the records aren’t clear) so it should hardly be a shock that at the height of the British Empire there were non-whites in the capital city of the Empire.

But the real change came in Elizabeth I's reign, when, through the records, we can pick up ordinary, working, black people, especially in London.

Shakespeare himself, a man fascinated by "the other", wrote several black parts - indeed, two of his greatest characters are black - and the fact that he put them into mainstream entertainment reflects the fact that they were a significant element in the population of London.

Employed especially as domestic servants, but also as musicians, dancers and entertainers, their numbers ran to many hundreds, maybe even more.

And let's be clear - they were not slaves. In English law, it was not possible to be a slave in England (although that principle had to be re-stated in slave trade court cases in the late 18th Century, like the "Somersett" case of 1772).

In Elizabeth's reign, the black people of London were mostly free. Some indeed, both men and women, married native English people.

The parish records of this time from "St Botolph's outside Aldgate", are especially revealing. Here, among French and Dutch immigrants, are a Persian, several Indians and one "East Indian" (from today's Bengal).

In this single small parish, we find 25 black people in the later 16th Century. They are mainly servants, but not all - one man lodging at the White Bell, next to the Bell Foundry off Whitechapel road, probably worked at the foundry.

Some were given costly, high status, Christian funerals, with bearers and fine black cloth, a mark of the esteem in which they were held by employers, neighbours and fellow workers.

Partridge Iciclebubbles wrote:Just wait until this banana split finds out that there’s a version with an interspecies family. 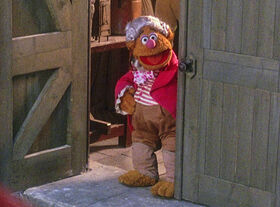 It does amaze me how attitudes have turned out. You would think 500 years of living in a multi-ethnic society should more or less destroy racism and racial tensions and that after so long it is simply the accepted norm with racism being a foreign and disgusting concept to everyone.

And yet here we are