Rap Battle #2: Wii U versus Switch 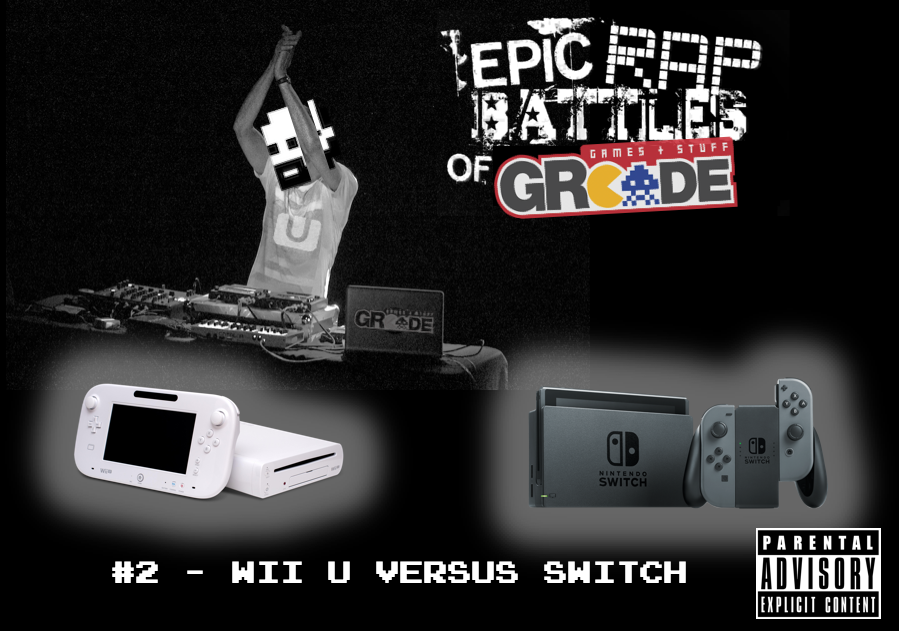 > We have two mad dawgs fighting for pole position here; the legendary Nintendo Wii U and the mighty Nintendo Switch. Neither is gonna give way on this stage without a fight and, as usual, the only way to sort this out is with some 90s-styled gangster rap.

> First up we'll have the U and then Switch can play. You decide on who wins!

Warning As ever, some rude, inconsiderate and inappropriate words may be used. And jawa loves both the consoles, really.

Bereft of ideas and offering less than before,
Get back in your box and off this f*ckin' floor.
There ain’t no style, your home screen is boring,
Plain black or white, four years of snoring.

There are no folders, everything’s a mess,
Just nothing there and – hey – let’s guess.
Nothing’s gonna change and no features will arrive,
It’ll be the same old crap at the end of year five.

Do friends exist? Well not in your game,
I can't talk or message them, it's one long bloody pain.
Your online is sh*t, so f*ckin' trash,
Your structure is crap yet you rip us for cash.

And the games? Well this is where you’ve sat right back,
Developing nothing and being all-out slack.
Digging out MY games and calling them Deluxe,
Before jacking up the price by a good ten bucks.

You’re not making new games, you sit back and fake it,
Bending over gamers and making them take it.
There is no Nintendo feeling, very little spirit,
At the end of the day, that’s f*cked up, innit?

You think you're a king pin, sat top of the tree,
But I was the best and you should praise me.
I had the juice and I ain't no martyr,
My gaming was built by Reggie and Iwata.

Now I’m on the stage, the console top-dog,
You had your time and it was one long slog.
Gamers knew what was up, they didn’t give you a pass,
Which end was your elbow and which was your ass?

People thought you were an add-on, something for the Wii,
Too f*ckin’ weird and they stayed on PS3.
A tacky plastic tablet, with not much to play,
You couldn’t get a partner… at least not one who’d stay.

Twenty frames a second, the third-party support was crap,
The tablet only ever used to show a strawberry-floatin’ map.
Nintendo pumped out games, but yeah, so what?
I can play ‘em now, and twice as damn hot.

You talk about folders, and fancy little ditties,
But gamers don’t want that, they want big titties!
Your home screen looked phat but ran like sh*t,
The only people playing were still on Wii Fit.

I took your best stuff and now you’re sat there in tears,
Crying like a baby for those short wasted years.
Nobody bought you and there wasn’t much love,
Meanwhile I’m selling tons and looking down from above.

It’s the end of your story and there’s nothing more to be said,
It’s just Club U left and they’re whack in the head.
There’s just one person here who still gets it up for you,
Brace and get ready – here comes jawa2.

Trying to think of a word that encapsulates being both incredibly confused and wonderfully impressed simultaneously.

Also you've got them the wrong way round?

The Watching Artist wrote:Also you've got them the wrong way round?

This seems an unlikely point to make in defence of the Switch...