US Politics - Trump cancels summit having to do with North Korea

I don't see this Novartis thing going anywhere, I was always under the impression that paying for access to politicians was the bedrock of the American political system.

Pence on Mueller probe: 'It's time to wrap it up'

Vice President Mike Pence said Thursday morning that special counsel Robert Mueller should end his probe into allegations of collusion between President Donald Trump’s 2016 campaign and the Russian government “in the interest of the country.”

But despite prodding from the vice president and others in Trump’s orbit, Mueller’s probe, approaching its one-year anniversary, has shown no signs of winding down amid significant public speculation on whether the president will sit for an interview with the special counsel’s team.

“You know, our administration has been fully cooperating with the special counsel and we’ll continue to. What I think is that it's been about a year since this investigation began,” the vice president told NBC News’ Andrea Mitchell. “We've fully cooperated in it and in the interest of the country, I think it's time to wrap it up. And I would very respectfully encourage the special counsel and his team to bring their work to completion.”

I bet many US politicians are getting nervous with the FBI looking into payments from big businesses.

I know Pence is just towing the party line, but he comes off as having something he doesn't want the FBI to stumble onto, in the course of its investigation.

Three days after President Trump was sworn into office, the telecom giant AT&T turned to his personal attorney, Michael Cohen, for help on a wide portfolio of issues pending before the federal government — including the company’s proposed merger with Time Warner, according to documents obtained by The Washington Post.

The internal documents reveal for the first time that Cohen’s $600,000 deal with AT&T specified that he would provide advice on the $85 billion merger, which required the approval of federal antitrust regulators.

Trump had voiced opposition to the merger during the presidential campaign, and his administration ultimately opposed the AT&T effort. The Department of Justice filed suit in November to block the deal, and that case is pending.

Cohen’s deals with AT&T and other corporate clients were first revealed this week by an attorney for adult-film star Stormy Daniels, but the new documents obtained by The Post offered greater detail about his arrangement with the telecom company and the type of work he had been hired to perform.

It is unclear what insight Cohen — a longtime real estate attorney and former taxi cab operator — could have provided AT&T on complex telecom matters.

At the same time that he was collecting $50,000 a month from AT&T, Cohen was being paid large sums to advise other companies on a broad variety of issues, including the Affordable Care Act, accounting practices and real estate.

In the wake of Trump’s election, corporate clients paid Cohen at least $2.95 million through a company called Essential Consultants, according to figures confirmed by the companies.

Essential Consultants was the same company Cohen used in October 2016 to route money to Daniels in exchange for her agreement not to disclose an alleged affair with Trump.

The corporate payments he received demonstrate how Cohen was able to turn his ties with the new president into money-making opportunities, despite Trump’s campaign pledges to “drain the swamp.”

AT&T and the pharmaceutical company Novartis, another Cohen client, said this week that they provided information about their dealings with Trump’s lawyer to special counsel Robert S. Mueller III last year. Cohen is also under investigation by prosecutors in New York for possible bank fraud and campaign finance violations.

Special assistant Kelly Sadler made the derisive comments during a closed-door White House meeting of about two-dozen communications staffers on Thursday morning.

“It doesn’t matter, he’s dying anyway,” Sadler said, according to a source familiar with the remarks at the meeting.

The White House did not deny the account of Sadler’s remarks, which came amid a discussion of Haspel’s nomination and McCain’s opposition to it.

In 2016 they were casing the joint, the same as in any heist (or other daring crime) movie. I'm 2018/2020, we might expect zero hour attacks - voter data deleted, altered or corrupted en masse, perhaps in a few strategically selected races and states, creating nationwide chaos. Such attacks will not immediately be attributed to foreign intrusion, and the results, naturally, will favor the GOP, who will shout down all talk of Russian influence.

Can't wait for the tell-all books talking about Trump demanding no people of color.

The hero we all need.

He appears to have been provided with copies of some of Cohen's emails too. Cohen had been in contact with Stormy Daniel's previous lawyer after the FBI raids and was also trying to get him to stop her seeking alternative representation. Avenatti believes that Stormy's previous lawyer had been working a scam with Cohen as he represented multiple women against Trump and may have been working directly with Cohen in an effort to silence them. 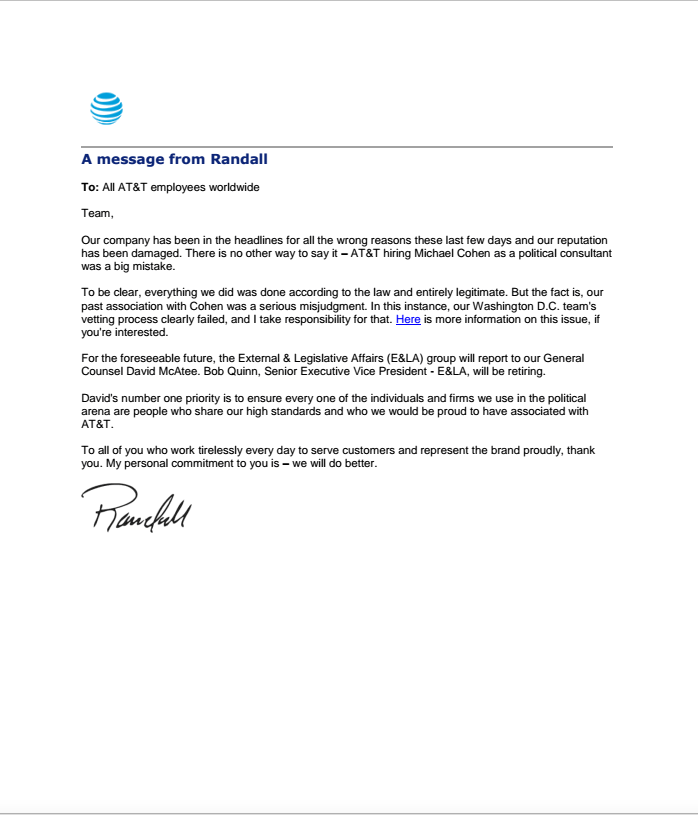 Reminder that as well as being Trump's personal lawyer, Cohen was also National Deputy Finance Chairman of the Republican National Committee.

Mueller is looking into Trump inauguration donations with foreign connections:

Those interviewed included longtime Trump friend and confidant Thomas Barrack, who oversaw the fundraising effort, as well as individuals familiar with the massive inaugural fund, according to sources with direct knowledge.

Barrack, a real estate investor, has long been described as a Trump “whisperer” whose close friendship with the president landed him a prime appearance during the GOP convention the night Trump accepted his party’s nomination.

The billionaire runs a fund with hundreds of millions in real estate and private equity holdings in the Middle East. Barrack oversaw the largest inaugural fundraising effort in U.S. history, bringing in $107 million – more than double what President Barack Obama raised for his first swearing-in festivities.

According to a source who has sat with the Mueller team for interviews in recent weeks, the special counsel is examining donors who have either business or personal connections in Russia, Saudi Arabia, the United Arab Emirates and Qatar. Several donors with those ties contributed large sums to the non-profit fundraising entity – gifts that topped out at $1 million dollars, according to public records.

Trump fans are such snowflakes

In the left-leaning Big Apple, it’s a fashion faux pas more fatal than walking around in sandals with socks, or strapping a fanny pack around your waist: wearing a “Make America Great Again” hat.

To see for myself, I sported the fire-engine-red baseball cap worn by Donald Trump on the campaign trail in liberal gin joints and shops across Manhattan and Brooklyn.

I may as well have been wearing a Red Sox hat at Yankee Stadium.

The mere sight of my cap nearly caused a riot at the historic Stonewall Inn on Christopher Street — site of the 1969 riots that launched the gay rights movement.

“You come into a gay bar — THIS gay bar — with THAT hat!” one woman lectured as a large crowd gathered.

At Soho’s sceney La Esquina, where celebs like Julia Roberts nosh on $26 enchiladas, servers nearly lost their lunch when I showed up.

“Oh my God, do you see that? Is he serious? Is he kidding me?” one waiter gasped.

My companion and I were quickly shunted to an out-of-sight table near a back wall.

At Sylvia’s soul food restaurant in Harlem, my server, Patrick Bros, admitted after my meal that he was taken aback by the hat, but figured, “Whatever.”

Nearby, folks were less diplomatic.

“Don’t talk to him!” a man instructed a street vendor as I browsed along 125th Street near the Apollo Theater.

Hipsters and trustafarians along Bedford Avenue in Williamsburg either did a double take, or shot me a death stare or a snarky remark.

“Take off that stupid f—ing hat!” one skinny-jeans wearer sneered.

At high-end chapeau peddler Goorin Bros., I overheard a salesman tell his colleague, “I’m losing my sh–!” as I walked in. When I asked him to hold my hat while I admired a fedora, he grimaced.

“I’m surprised nobody’s knocked that hat off your head!” a mother of two scolded me as we crossed paths along Central Park West and 63rd Street. “Make America Great Again — right!”

On the sidewalk near Lincoln Center, I spotted comedian Chris Rock and asked him to join me in a selfie. He raised his palm, and kept on walking.

Erm, I assume wearing an "I love Obama!" hat would go down just fine in all conservative establishments and especially dive bars and would not elicit any mention at all and everything would be just peachy. Nobody would dare to even notice the hat lest there be an incident and a kerfuffle ensue which would spoil the perfect conservative ambience of calm amid the room full of gun owning and packing good old boys.

Users browsing this forum: No registered users and 63 guests