Anything to do with games at all.
Post Reply
290 posts

Corazon de Leon wrote:Have you got the one pinned to the wall when Nemesis is shooting rockets at you? That one's easily missable.

Where is this? I couldn’t find anything other than the one about the Electrical generators, which I already had.

When you’re running through the alleyways at the start of the fight it’s cheekily round a corner after a fire, it’s like a chicane almost, you keep going straight in the same direction. I don’t know if that helps at all but good luck!

Yeah I think you mean the Electrical generators one which is there from the start of the game.

Just did my Standard S rank run with no cheese.

Made it by 4 seconds

I know it's doable a lot quicker than that and I could do it close to an hour, but I dicked about a lot. Was going like the clappers by the end and had to make the run from the lab save room to make the vaccine them beat both bosses I'm under 10 minutes! Almost botched the Carlos shot too

I definitely don’t mean one at the electrical generators. It’s after you go to Kendo’s gun shop. Then you go through the house. Cut scene plays where Nemesis fires a rocket launcher at you, then you run and turn left. There’s a zombie at the end of this alley, where I think you turn right. Then there’s a fire on the left hand side(on the harder difficulties a parasite zombie comes out of the fire) and the wall on the right hits a corner(though it’s only about half way down the passage way - at the end you turn left and there’s another cut scene where he jumps on top of a car and starts launching rockets at you). The note I’m talking about is round that corner.

According to this video there’s nothing there

Corazon de Leon wrote:Well strawberry float, I definitely got something there!

There’s two around there but you’ll normally get them when you walk past on your way to the substation.

Do you know I'd never put two and two together that you're running towards the substation when you go through that alleyway. My humble apologies.

To be fair it’s a pretty bland non-descript alley. One of my complaints about the game really is that the locations aren’t really that recognise able or memorable. It makes up for it by being part of a whole a bit but alleyways and back areas are kinda nothing

Yup the last missing file for me was the demolition notice in the burning building right before the rooftop battle. 4th time starting Inferno, forgot to save the other 3 times and got to a certain point before getting killed

Now at RPD and saved 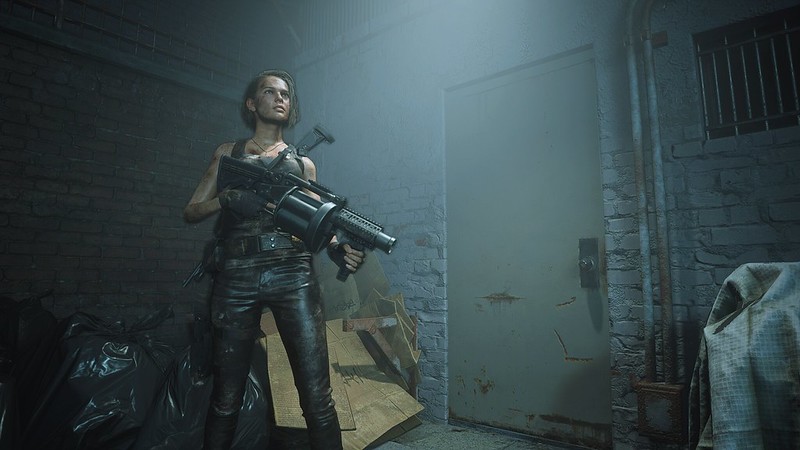 Is that a PC mod then. My final file was on the wall before the penultimate Nemesis fight

Going through on INFERNO now, I don't really like these bonus modes, there's just a gooseberry fool load of one hit kill bullshit and the lack of checkpoints means you just have to try wanky sections over and over again. Unless you're some kind of God or have infinite patience, then the game just forces you into using the Infinite Rocket launcher which basically takes most of the fun out of it anyway.

I did it all without Shop items up until you have to run away from Nemesis with a Rocket Launcher, which ends up basically being luck based and if you get lucky then you still have to do this magic dodge where he charges up behind you and twats you with an instant kill. It's just not fun at all. The challenge of getting through the first part was good but since then its all been bollocks.

I'll keep playing it because the RE engine is so good and the gunplay feels great but unless we get some quality DLC I'd say it's a pretty disappointing follow-up to RE2.

Having Platinumed the game and bought everything from the store and unlocked all items, concept art and models, I have to say that I think some criticism Capcom are getting for this is fair.

The Nightmare and Inferno modes are entirely redundant. Since you dont get anything for doing them without bonus items (and are basically impossible without them), they push you to just using Infinite items which make any difficulty they pose entirely trivial. The hardest part of the game becomes dodging the zombie before you get to Carlos. They add next to nothing to the game and just really feel like they were added very last minute when they realised how thin the game was for content. I did Nightmare entirely without bonus items except for the final boss and Inferno I did mostly without items bar a few wanky sections. Those playthoughs both took about 8 hours and I don’t think I got anything out of them more than replaying Hardcore mode.

The actual legit challenge in this I think is getting S rank on hardcore without using bonus items. The game doesn’t treat you like a banana split and getting under that 1h45m is a good test. I really don’t know why they took out S+ rank modes. It seems like it would take very little work to have included them, though maybe they realised what bullshit they have in those Nightmare and Inferno modes, especially for the last boss. But if it was a toss up between having an S+ rank on the 3 standard difficulties like Resi 2 and these bonus modes, I’d take the S+ without hesitation.


With that out the way, I’ve put 50 hours into it now and beaten it half a dozen times at least and like RE2 it’s just brilliant to play. Taking on the zombies is just so much fun, I feel like with these mechanics that they could churn out any situation, setting, challenge and it’d be a personal 9/10 at least. There is definitely some jank in this game with reloads in boss fights and the camera angle getting jammed up Jill’s arse inexplicably but aside from those there’s basically nothing about the way it plays that I would change.

I can’t wait to find out what they’re working on next, I hope it’s in this style as opposed to RE7 FPS because both these last games beat that hands down for me. Given they’ve been quiet for nearly a month I’m starting to lose faith but I’d love DLC and if they do a combo next gen version which allows you to play through RE2/3 in chronological order I’ll be there for a special edition day one.

Just started this for the first time (including the original) but holy gooseberry fool, is it just me or is the map strawberry floated? I've got to go to the Subway Office but after being chased by Nemesis a few times (who, holy strawberry float, is more boring than Tyrant ever was in terms of being an inconvenience rather than a threat), and I'm now back at the Subway station and the maps don't seem to match up at all. Again, this would be fine if normal exploration was possible but arsing shitting Nemesis smacking you about all the time makes even the act of trying to figure out where you are an absolute chore.

What do you mean the maps don’t match up? Without wanting to sound like a dick I don’t really see how you can get lost or not know where stuff is, because it’s so small. I guess on a very first exploration it’s maybe a little unclear until you realise it’s just a loop with a few dead end paths.

On Normal your best bet is probably to just down Nemesis with a grenade. He’s pretty straightforward just to run away from, though actually getting into the subway station after he first spawns can be a bit fiddly because of the zombies that spawn there.

If anything isn’t clear let me know because I have it pretty well memorised now.

It's just a case that the labels don't match up. I knew I had to get to the Office, but Office was on it's own level divorced from any other reference points, and spatially going between levels of map didn't match up. Again, once I figured out a route it wasn't difficult, but the Nemesis being on his jollies made progress a frustrating chore rather than a scary experience.

This is strawberry floating miles behind RE2. And having just arrived back in the Police Station, not sure whether to expect improvements or not. I get that they went for more action this time, but the best part of any Resi is the first couple of hours where you're still figuring out the mechanics of the new environments and enemies, and exactly how much danger you're in or damage you can deal back, so essentially copy-pasting the zombie/tyrant mechanics from RE2 means that you know where you stand from the off, and it feels really grindy.

Mechanically I think it’s great, maybe not on par with Resi 2 because I prefer the survival horror slant to the action horror of this. Mr X / Nemesis is a bit of a redundant comparison I think because they designed to do two very different things. Nemesis certainly didn’t work how I think he was going to but overall I’d probably say it’s at least as successful as Mr X in what they were trying to achieve and probably more so.

Where this really falls down is the amount of content it has and the value of replays due to the completely borked difficulties and ranking system. It’s a solid game and one I personally still love but it’s hard to recommend to just a casual fan who is looking at 40 quid for a 6-7 hour experience.