Yes that's what it sounds like - image reconstruction from brain scans. Scroll to the images and be amazed and/or terrified.

So what does this lead us to? Being able to record and watch dreams? Or thought police? Why not both?

Yes that's what it sounds like - image reconstruction from brain scans. Scroll to the images and be amazed and/or terrified.

So what does this lead us to? Being able to record and watch dreams? Or thought police? Why not both?

OrangeRakoon wrote:Crocodile was predictable, with no twist like the series is somewhat known for. Its central tech-of-the-future especially was just too unbelievable, I couldn't buy into it. I was just thinking "that's not how memories work". Especially with how it was supposedly used at the end. Again, there were definite similarities with "The Entire History of You" with the rewatching of memories.

But it's not how memories work

The thought police will have a hard time reading my thoughts, I haven't had a clear thought in decades.

Joking aside this is pretty big, I wouldn't think we would have to worry about nefarious government agencies checking we are thinking according to party line.

Better than holograms: A new 3-D projection into thin air

Scientists have figured out how to manipulate nearly unseen specks in the air and use them to create 3-D images that are more realistic and clearer than holograms, according to a study in Wednesday's journal Nature . The study's lead author, Daniel Smalley, said the new technology is "printing something in space, just erasing it very quickly."

In this case, scientists created a small butterfly appearing to dance above a finger and an image of a graduate student imitating Leia in the Star Wars scene. 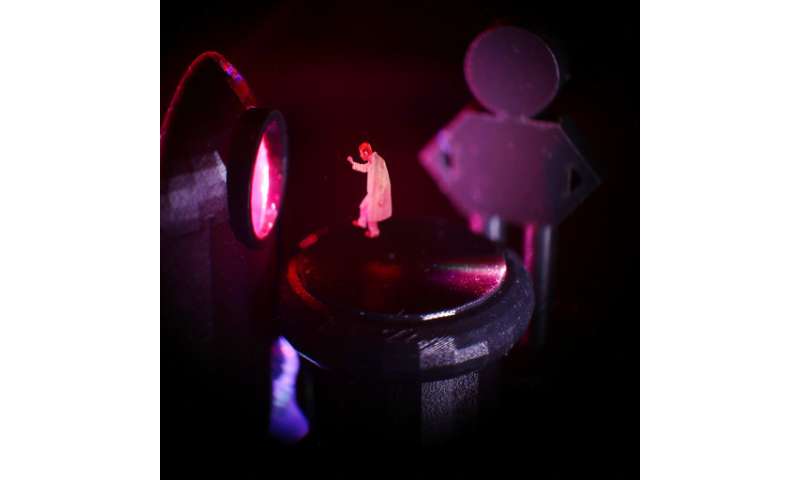 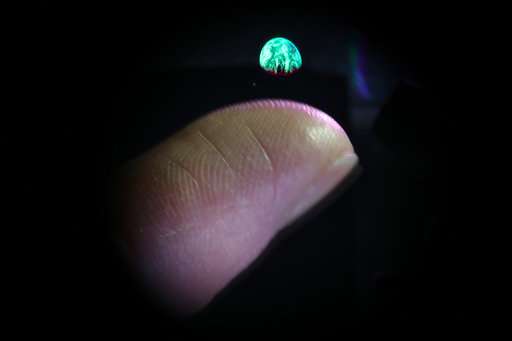 Thought that was a tiny metroid for a second.

Holograms, now that's a future worth believing in.

Meanwhile, mankind's been kicking about in Israel for a while, eh? Science goes on the hunt for clues, with skeletally sexy results!

Modern humans were wandering out of Africa at least 180,000 years ago — some 60,000 years earlier than previously thought.

The new migration date comes after ancient stone tools and part of a fossilised Homo sapiens jaw bone with teeth were discovered in a cave in northern Israel.

The fossil jaw and tools, presented today in the journal Science, challenges currently accepted ideas about how modern humans dispersed from Africa, according to Peter Hiscock, an archaeologist at the University of Sydney.

While geneticists have traced the modern human's emergence from Africa back around 60,000 to 80,000 years, "skeletal information excavated by archaeologists has told a much older story", Professor Hiscock said.

I didn't want to trigger Rightey in the chat room thread, so this can go here.

The first modern Britons, who lived about 10,000 years ago, had “dark to black” skin, a groundbreaking DNA analysis of Britain’s oldest complete skeleton has revealed.

The fossil, known as Cheddar Man, was unearthed more than a century ago in Gough’s Cave in Somerset. Intense speculation has built up around Cheddar Man’s origins and appearance because he lived shortly after the first settlers crossed from continental Europe to Britain at the end of the last ice age. People of white British ancestry alive today are descendants of this population.

It was initially assumed that Cheddar Man had pale skin and fair hair, but his DNA paints a different picture, strongly suggesting he had blue eyes, a very dark brown to black complexion and dark curly hair.

The discovery shows that the genes for lighter skin became widespread in European populations far later than originally thought – and that skin colour was not always a proxy for geographic origin in the way it is often seen to be today.

Tom Booth, an archaeologist at the Natural History Museum who worked on the project, said: “It really shows up that these imaginary racial categories that we have are really very modern constructions, or very recent constructions, that really are not applicable to the past at all.”

Yoan Diekmann, a computational biologist at University College London and another member of the project’s team, agreed, saying the connection often drawn between Britishness and whiteness was “not an immutable truth. It has always changed and will change”.

The findings were revealed ahead of a Channel 4 documentary, which tracked the ancient DNA project at the Natural History Museum in London as well as creating a new forensic reconstruction of Cheddar Man’s head.

To perform the DNA analysis, museum scientists drilled a 2mm-diameter hole into the ancient skull to obtain a few milligrams of bone powder. From this, they were able to extract a full genome, which held clues about this ancient relative’s appearance and lifestyle.

The results pointed to a Middle Eastern origin for Cheddar Man, suggesting that his ancestors would have left Africa, moved into the Middle East and later headed west into Europe, before eventually crossing the ancient land bridge called Doggerland which connected Britain to continental Europe. Today, about 10% of white British ancestry can be linked to this ancient population.

The analysis also ruled out an ancestral link with individuals inhabiting Gough’s Cave 5,000 years earlier, who appear to have performed grisly cannibalistic rituals, including gnawing on human toes and fingers – possibly after boiling them – and drinking from polished skull cups.

Britain was periodically settled and then cleared during ice ages until the end of the last glacial period about 11,700 years ago, since when it has been continuously inhabited.

Until now, though, it hasn’t been clear whether each wave of migrants was seeded from the same population in mainland Europe; the latest results suggest this was not the case.

The team homed in on genes known to be linked to skin colour, hair colour and texture, and eye colour. For skin tone, there are a handful of genetic variants linked to reduced pigmentation, including some that are very widespread in European populations today. However, Cheddar Man had “ancestral” versions of all these genes, strongly suggesting he would have had “dark to black” skin tone, but combined with blue eyes.
Scientists believe that populations living in Europe became lighter-skinned over time because pale skin absorbs more sunlight, which is required to produce enough vitamin D. The latest findings suggest pale skin may have emerged later, possibly when the advent of farming meant people were obtaining less vitamin D though dietary sources like oily fish.

Cheddar Man would have lived a hunter-gatherer lifestyle, making sharp blades from flints for butchering animals, using antlers to whittle harpoons for spear fishing and carving bows and arrows.

You know Cheddar is a place in Somerset? The scientists are not saying ancient humans were made of cheese.

You know Cheddar is a place in Somerset? The scientists are not saying ancient humans were made of cheese.

I am aware of that, thanks for checking though Moggy.

They were blatantly made of cheese though.

I am glad we cleared it up Preezy. I’ll tell you all about Wookey Hole one day.

I always love it when some American show says REAL AMERICAN CHEDDAR. I don't remember any freedom fromage factories last time I went to cheddar gorge

It looks like there may be hope that we'll see Nuclear Fusion reactors coming online and powering stuff within our lifetimes.

MIT embarks on ambitious plan to build nuclear fusion plant by 2033
It just received $50 million worth of funding to do so.

MIT announced yesterday that it and Commonwealth Fusion Systems -- an MIT spinoff -- are working on a project that aims to make harvesting energy from nuclear fusion a reality within the next 15 years. The ultimate goal is to develop a 200-megawatt power plant. MIT also announced that Italian energy firm ENI has invested $50 million towards the project, $30 million of which will be applied to research and development at MIT over the next three years.

Nuclear fusion offers quite a few benefits over other energy production methods, including nuclear fission. Nuclear fusion stands to be more efficient, cleaner and safer than other methods, but it has been rather hard to put into action. The process generates incredibly high temperatures and requires a lot of energy input -- an amount that has outweighed outputs so far -- and those issues have prevented nuclear fusion from becoming a viable energy source to date.

The extremely high temperatures require that magnetic fields, rather than solid materials, confine the hot plasma in which the fusion reactions take place. MIT and CFS plan to use newly available superconducting materials to develop large electromagnets that can produce fields four-times stronger than any being used now. The stronger magnetic fields will allow for more power to be generated resulting in, importantly, positive net energy. The method will hopefully allow for cheaper and smaller reactors. The research team aims to develop a prototype reactor within the next 10 years, followed by a 200-megawatt pilot power plant. "If MIT can do what they are saying -- and I have no reason to think that they can't -- this is a major step forward," Stephen Dean, head of Maryland-based advocacy group Fusion Power Associates, told Nature.

The team sees their work as being complementary to what will take place at the ITER tokamak fusion reactor currently being built in France. That project has attracted a lot of attention and funding, but it has also gone way over budget and has hit a few delays. It reached its construction halfway point last year -- after beginning in 2013 -- and those behind it are aiming to starting running experiments in the facility by 2025.

"This is an important historical moment: Advances in superconducting magnets have put fusion energy potentially within reach, offering the prospect of a safe, carbon-free energy future," MIT President Rafael Reif said in a statement. "As humanity confronts the rising risks of climate disruption, I am thrilled that MIT is joining with industrial allies, both longstanding and new, to run full-speed toward this transformative vision for our shared future on Earth."

Hopefully it all works out. I'm tired of hearing fusion power news followed closely by the words "not in our lifetime" or something to that effect.

I'm putting my faith in the European ITER program.

All those long lunches are going to reeeeally add up.