Anything to do with games at all.
Post Reply
111 posts

Sonic the Hedgehog CD or Sonic CD, is a critically acclaimed 1993 platform video game in the Sonic the Hedgehog series, developed by Sonic Team for the Mega-CD/Sega CD. It marked the first official appearance of the characters Metal Sonic and Amy Rose. It was released by Sega in Japan on September 23, 1993, in Europe in October 1993, and in North America on November 19, 1993.

After a long adventure, Sonic arrives in Never Lake where the fabled Little Planet is said to appear on the last month of every year, joined by a female pink hedgehog named Amy Rose. They arrive to find the planet tethered to a mountain by a chain and completely covered in metal. It doesn't take long for Sonic to realize this is the work of his arch-nemesis, Dr. Robotnik (aka Dr. Eggman), who is using the planet's unique time properties to make it his own base. Furthermore, Robotnik has created a robotic counterpart of Sonic named Metal Sonic, who kidnaps Amy. Sonic must traverse the Little Planet and collect the Time Stones, seven jewels capable of altering the passage of time itself, in order to save Amy, destroy Metal Sonic, stop Robotnik and free the Little Planet from his grasp.

Players control Sonic as he speeds his way to end of each level, using his spin attack to fight against Dr. Robotnik's badniks. Along the way, Sonic can collect rings, which can protect him if he hit by an enemy or obstacle, as well as items such as shields, invincibility and speed shoes. Sonic's gameplay remains similar to that of Sonic the Hedgehog but with the addition of the Spin Dash and the Super Peel Out, which lets him zoom into a quick speed from a standing point, either in a rolling or running position. Each of the game's seven zones consists of three acts; two main levels and a boss level.

The main gimmick in Sonic CD is the ability to travel to different periods of time within each level. By hitting posts labelled 'Past' or 'Future' and running at a consistently fast speed for a few seconds, Sonic can move between Past, Present and Future versions of each level (with the exception of boss levels, which always take place in the future), containing different layouts with changes to placement and frequency of enemies and obstacles. By default, travelling to the Future upon entering a level will take Sonic to a 'Bad Future', where enemies and deadly obstacles occur more frequently, providing a tougher challenge. However, if the player travels to the Past and destroys a Robot Generator hidden somewhere in the level, returning to the Future will take Sonic to a 'Good Future', where enemies are absent and there are fewer obstacles. If a Good Future is achieved in both acts of a zone, the boss level will take place in the Good Future, otherwise it will take place in the Bad Future. The player will also automatically achieve a Good Future in a level if all the Time Stones have been collected.

Similar to Sonic the Hedgehog, if a player has more than 50 rings by the end of the act, a giant ring appears that can take Sonic to a Special Stage if he jumps into it. Taking place on a three-dimensional plane, the player has a short amount of time to destroy seveal purple UFOs floating around the level. Time is rapidly reduced if the player runs through water, though a blue UFO which appears when time is running out can grant extra time if destroyed. If the player is able to destroy all the purple UFOs before the time runs out, a Time Stone is earned. A good ending can be achieved by collecting all seven Time Stones, or by achieving a Good Future in every act.

Sonic CD was the first Sonic game to use a backup save, using the internal Sega CD memory or a backup RAM cartridge. The game saves after the end of each third act (after which, a new level begins) and records the best times of the player in the time attack mode. The game also features an instant game over scenario, in which Sonic will leap off the screen and instantly end the game regardless of lives if he is left alone for three minutes without the game being paused.

Following the release of Sonic the Hedgehog, Lead Programmer Yuji Naka had grown dissatisfied with the rigid corporate policies at Sega and moved to the United States to work with the Sega Technical Institute, along with several members of Sonic Team, to develop Sonic the Hedgehog 2. Meanwhile in Japan, a separate development team headed by Sonic creator Naoto Ohshima handled development on Sonic CD. Sonic CD, and Sonic 2 were initially intended to be the same game. However, during development, Sonic CD evolved into a vastly different type of game. The game is the first in the series to feature animated cutscenes, which were produced by Toei Animation, with co-operation with Studio Junio

Why does this need an official thread? Why not put this in the retro forum?

Well the way I see it everyone played Sonic 1-3 because everyone had a MegaDrive, where as Sonic CD is part of that original series but no one owned a MegaCD, so for many of us this is a brand new game. 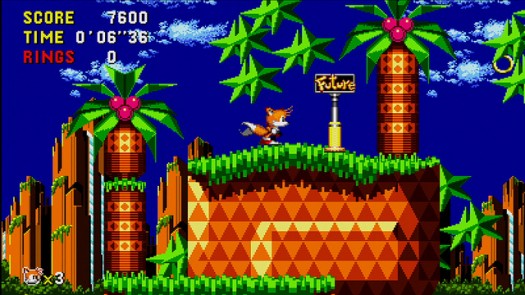 I am excited. Only played a little bit of CD on Sonic Gems Collection. Both soundtracks on this as well.

Sonic CD isn't that good. IIRC, The level design was fairly terrible, and everything else was basically just cosmetics to exploit the space of CD. Extra tile sets for levels (to allow it to be seen in different times) and large CD audio tracks.

Add to that touch screen controls, and the only assumption I can come to is that this is going to be shithouse.

Spindash wrote:I am excited. Only played a little bit of CD on Sonic Gems Collection. Both soundtracks on this as well.

Just the Jap/EU one apparantly

I swear I read it had both. Must have been a dream.

Spindash wrote:I swear I read it had both. Must have been a dream.

North American versions of Sonic CD also featured a different soundtrack from the Japanese and European versions when they were originally released, but that will change with the upcoming port, which will carry only the Japanese soundtrack. In addition, the new port will also have proper widescreen support that required Sonic Team--and a yet-to-be-named independent developer--to go back and rework some of the original physics so that they would work properly in the new screen format.

It's for the best really, the American soundtrack had no melodies (which is what Sonic's partially famous for), just a mish mash of random notes.

Sirus
Member
Joined in 2008
Location: The fine line between stupid and clever.

This game was good, but they made the levels extra massive to take advantage of the extra CD space. As a result this game can be completely baffling to play at times.

First appearance of Metal Sonic isn't Sonic CD. If it is what the strawberry float have we fighting at the end of Sonic 2 before the Egg-209 battle?

Wedgie wrote:First appearance of Metal Sonic isn't Sonic CD. If it is what the strawberry float have we fighting at the end of Sonic 2 before the Egg-209 battle?

Isn't that the mechanoid commonly referred to as Silver Sonic? Kind of a Metal Sonic prototype model. A prelude to Metal and Mecha.

Wedgie wrote:First appearance of Metal Sonic isn't Sonic CD. If it is what the strawberry float have we fighting at the end of Sonic 2 before the Egg-209 battle?

Was hoping this was going to come to XBLA at some point with the original Japanese score, so happy

If Tails is unlockable, does he still save Amy, and does she fall for him? Or have they added Cream to be his love interest?

Chris
Member
Joined in 2008
AKA: Chris B

This is sounding like a really great port, nice to see Sega going the extra mile with stuff like this and Daytona USA

i thought this was going to include both soundtracks though? If it's going to have one of them it should probably be the Japanese version, but the US one is excellent in its own right (and quite unfairly maligned).

As for the level design, it is rather 'wacky', but it is part of the appeal for me. The levels have a bit of a mini-sandbox feel to them in that they're fun to mess around in and explore. They also have some really awesome psychedelic visual designs to them, really creative stuff.

Alvin Flummux wrote:If Tails is unlockable, does he still save Amy, and does she fall for him? Or have they added Cream to be his love interest?

I bought Sonic CD on the PC years ago and loved it. It's probably my favourite of the classic Sonic games, but that's most likely to do with the amount of time I used to spend on it.

It does indeed have both soundtracks.

Ah well, atleast the JP one is set as default.