Tsunade wrote:I knew someone a while ago who always pronounced milk as "malk".

Jenuall wrote:I'm not trying to be a dick here, so apologies if it came across that way!

Nah not at all, it's interesting to discuss!

It wasn't helped by me choosing a poor example, I'm actually fairly sure no-one has ever said "vis", it was just the first word with a voiced "th" I thought of.

I should have thought harder for one that still trips me up sometimes. One occurred to me just now: if I slip up I sometimes say "weavver" instead of "weather".

Anyway, now the boot is on the other foot and I get to make fun of you for saying malk: 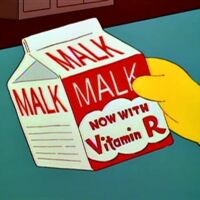 These words at the bottom of that page just made me laugh out loud and I don't know why.

OrangeRKN wrote:"Non-rhotic homophones" sounds like a way of describing the people at a BNP march

I think "bad-lad split" takes care of that.

He's such a banana split, Morrissey.

Maybe he can set a new label up on Parler.

My partner says Mary, merry and marry all the same way.

aayl1 wrote:I'm sorry you got socially pressured out of speaking in your normal way, Karl. I have definitley been guilty of doing that to other people in the past.

...and I will do it every time my American wife pronounces "snooker" to rhyme with "hooker".

I say it the same. I will not pronounce it Snooker like Snoo Snoo because it sounds gooseberry fool.

I refuse to believe there's grown ups in the world who pronounce it 'Snucker'.

Skarjo wrote:I refuse to believe there's grown ups in the world who pronounce it 'Snucker'.

You clearly haven't listened to Dear Hank & John. There are people who pronounce it that way, and it sounds awful.

Skarjo wrote:I refuse to believe there's grown ups in the world who pronounce it 'Snucker'.

You clearly haven't listened to Dear Hank & John. There are people who pronounce it that way, and it sounds awful.

Yeah I'm pretty certain that's how the Canadian guy on Fighting Talk has always pronounced it. Colin Murray hacks the piss out of him every time.

Maybe he was just enthusiastically saying hello to Mr Jackman?

Had to take my son to A&E yesterday. Had a garbled voice mail message from his school saying they thought he had broken his nose, there was blood everywhere and they couldn't get it to stop.

Turns out he just had a strawberry floating nose bleed.

He did lose quite a lot of blood and you can't be too careful with these things, especially where kids are concerned, so it was probably the right thing to do in the circumstances. But on the other hand what with the uptick in covid recently going to a busy hospital was not really my most desirable way to spend an afternoon!