The Board Game Thread

Roonmastor wrote:It's just setting you up for the Hollywood finale.

It's hard to see anything we can do in Yellow areas now - the snowballing outbreaks caused too many issues. Moving around is going to be so hard due to all the panicked cities. That was our problem in November 2. We just couldn't get there. 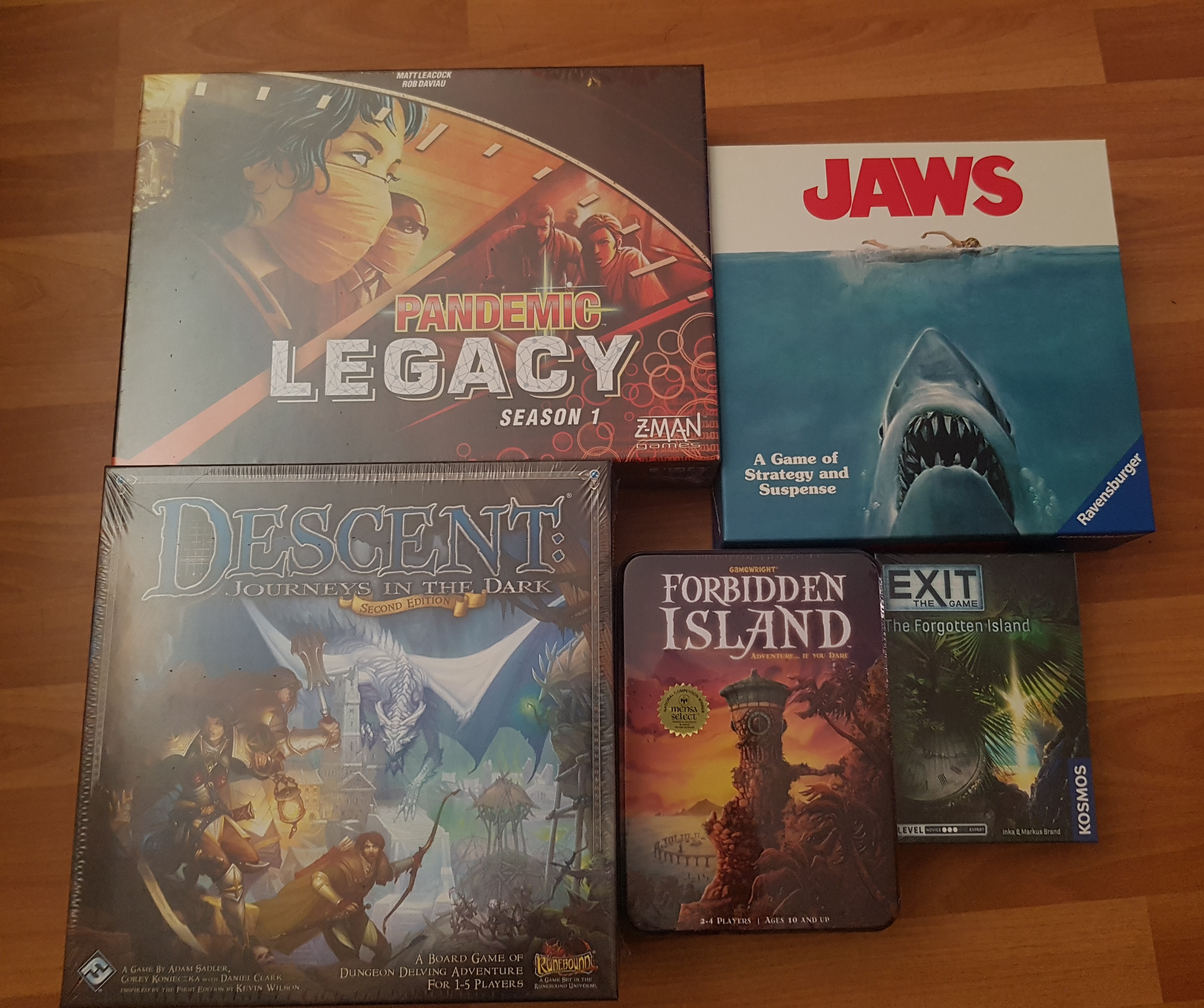 I got the LOTR card game and one of my kids got the Scotland Yard board game. Wife has also bought the family the Jumanji board game for after dinner today.

Some amazing stuff there!

I got Monoply Cheaters edition from my mum

Just played jaws, it was great fun. I played the shark and won the amity round, and was one dice roll away from winning the orca - it was amazing, just like the film (and by accident) I killed quint first, then Hooper, and had Brody on the ropes at the back of the boat. It came down to one dice roll hit which killed me off, and I had only to roll one hit to kill him.

Just opened descent up to separate all the card bits out. Soooooo much stuff in there! Really high quality double sided tiles, already giving that hero quest vibe. The figures are really nice too, ready assembled which saves some faff, but will make painting them tricky.

Me and my wife played our first game of Descent last night. We decided to use the free companion app to start out, which features a tutorial quest that mostly does a great job of explaining the mechanics as you go (think playing with someone who has played it before). It tells you what monsters to spawn and when, places items about and gives you lore and atmospheric descriptions when things happen, plus has some nice soind effects and music to add to the mood. It relies on you doing some of the monster stuff yourself, so you have to be honest and tell it when you've completed certain actions, but it's pretty good. We're currently at a town about to spend some of our xp and gold before the next mission. 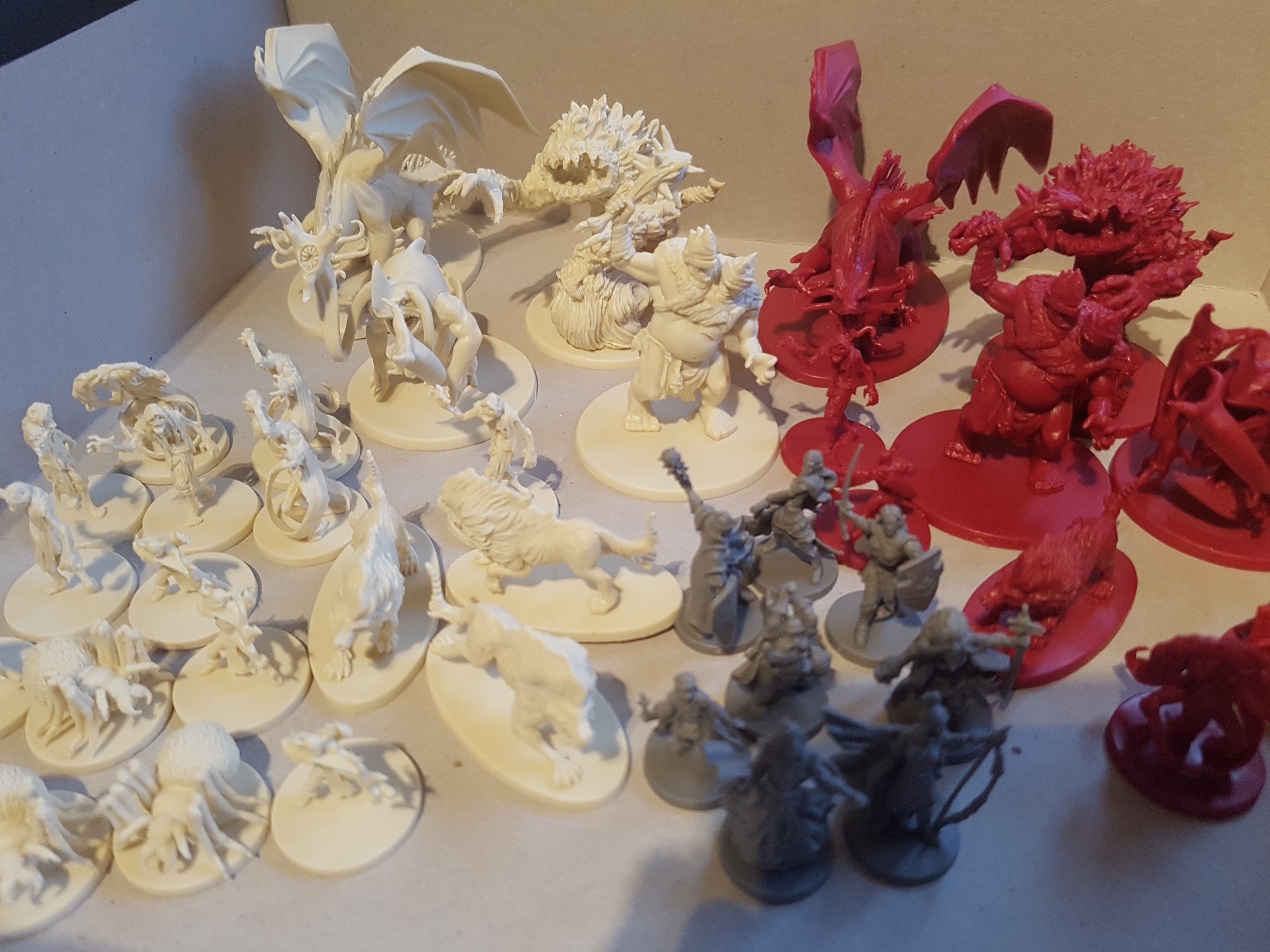 The tutorial level in progress (the state of that table) 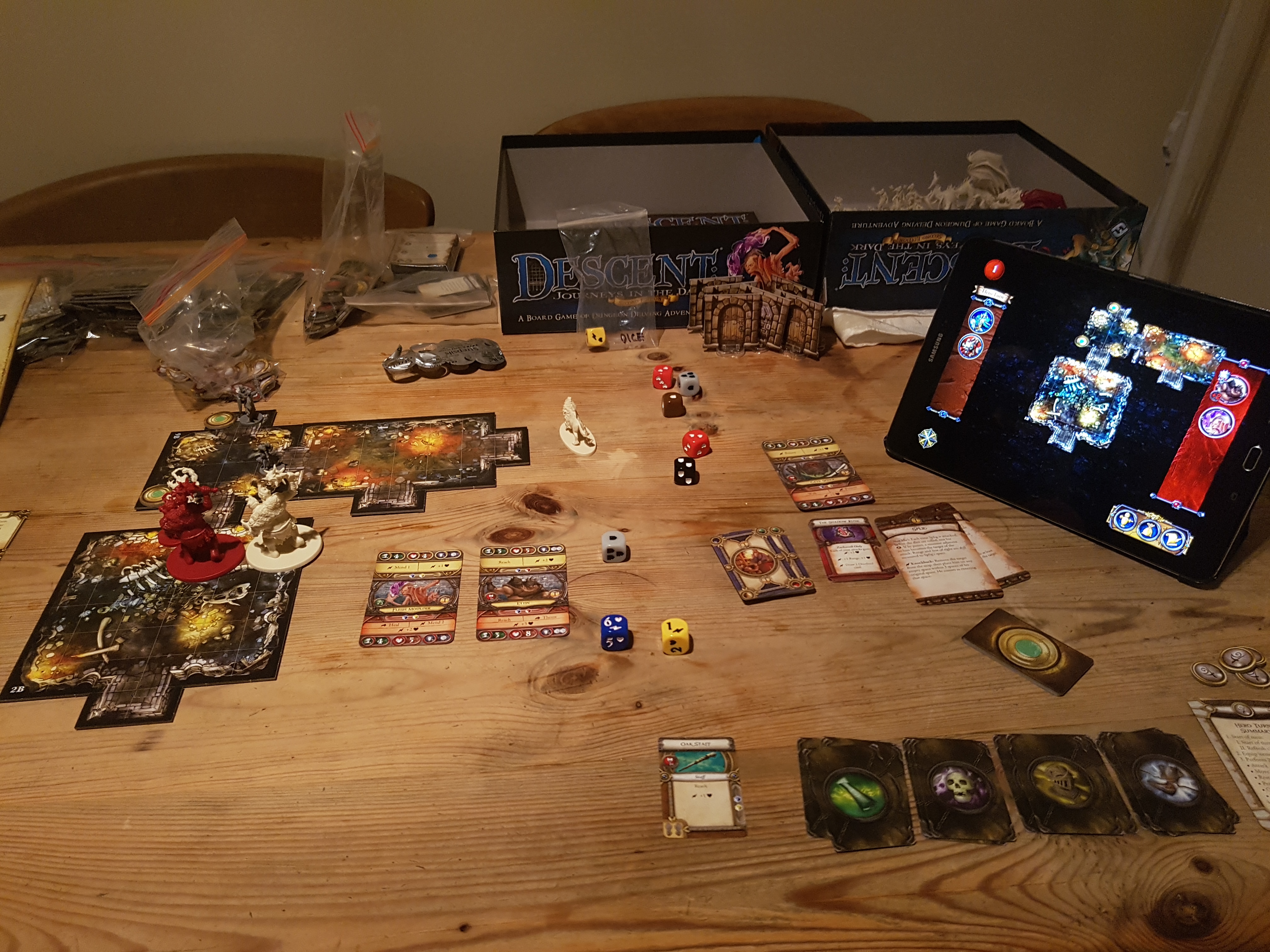 The app playing the role of DM 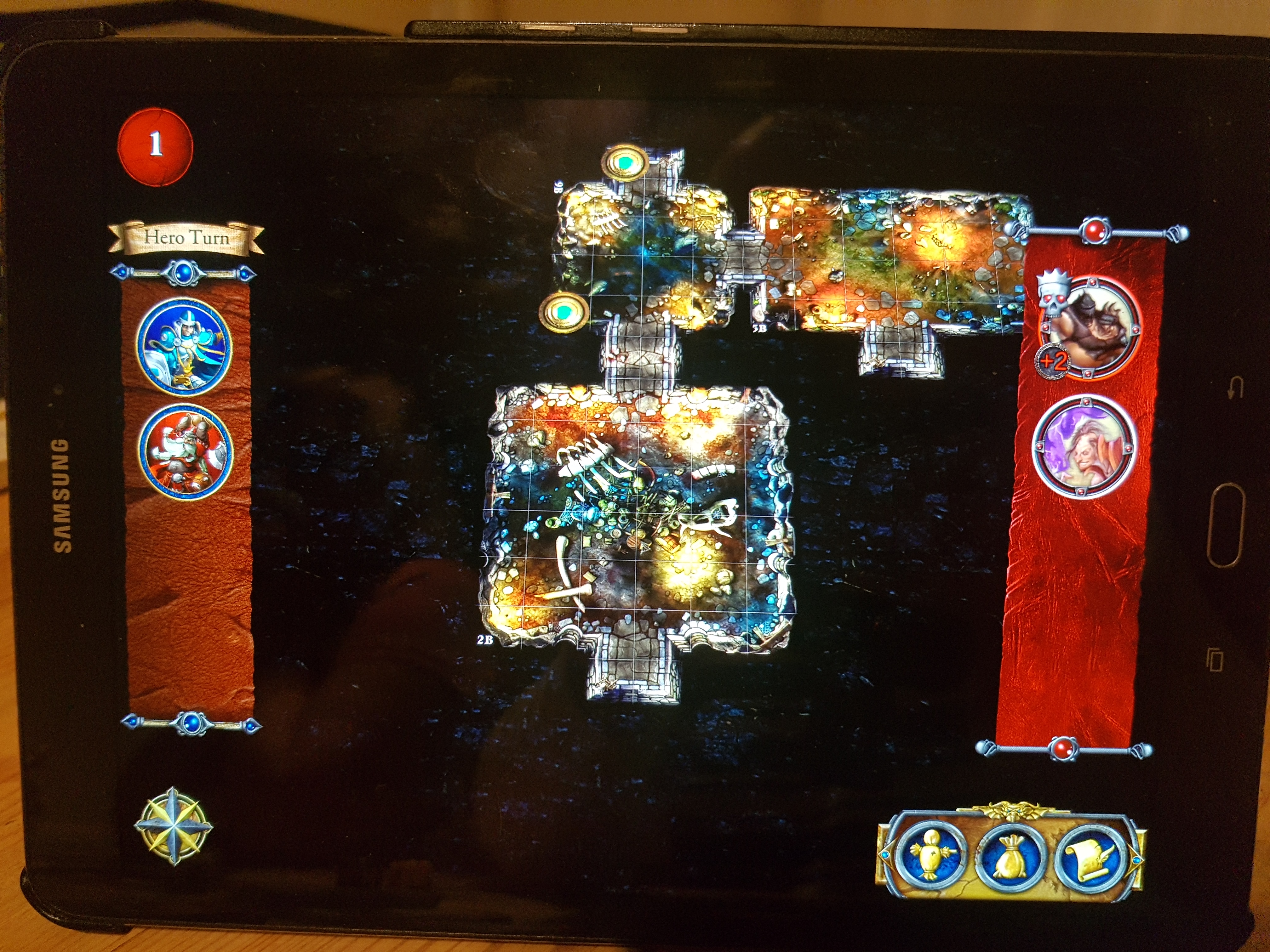 The big red beast appeared near the end, and we had to kill it to win 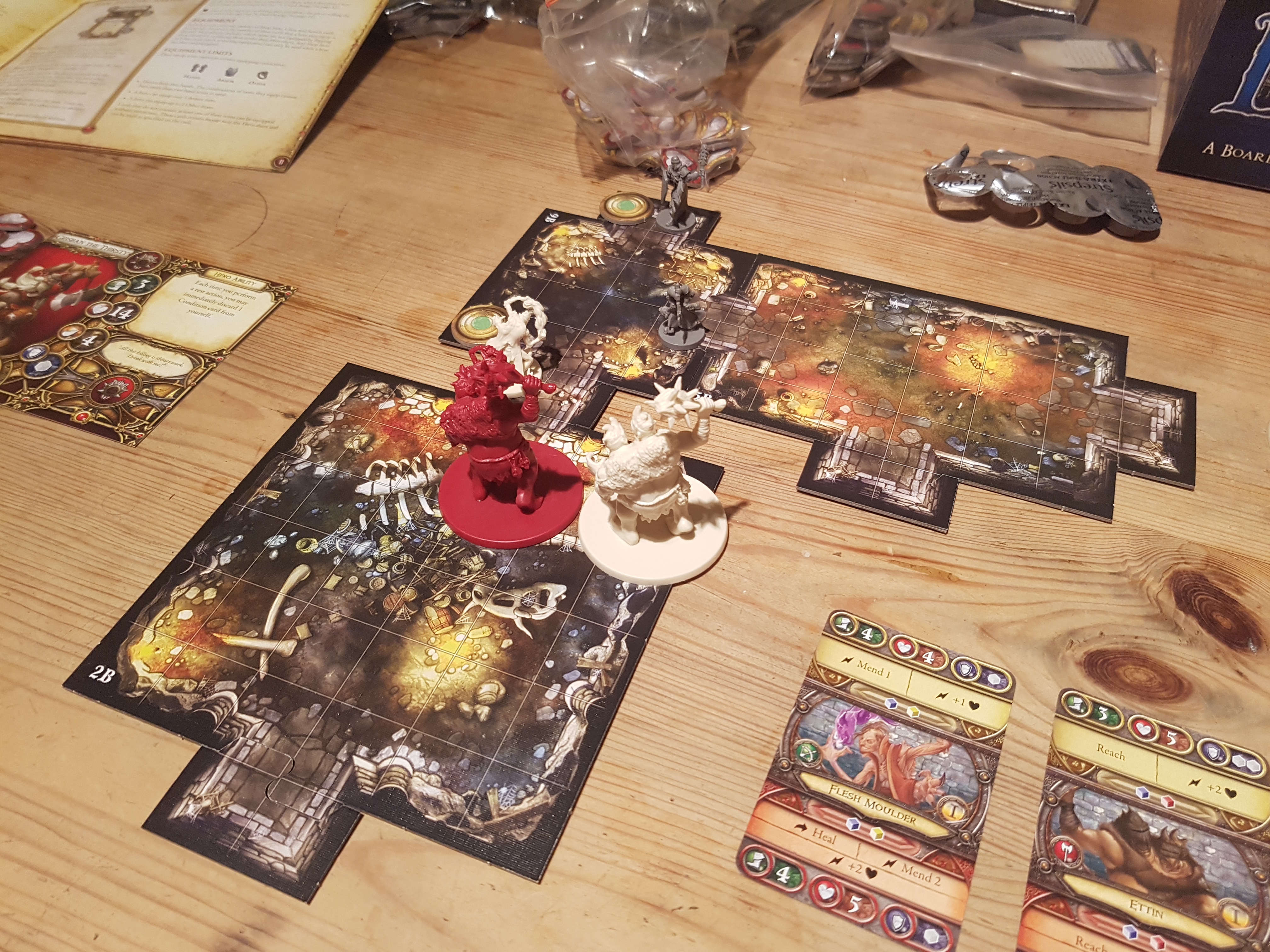 My character in a scrap with a mob leader 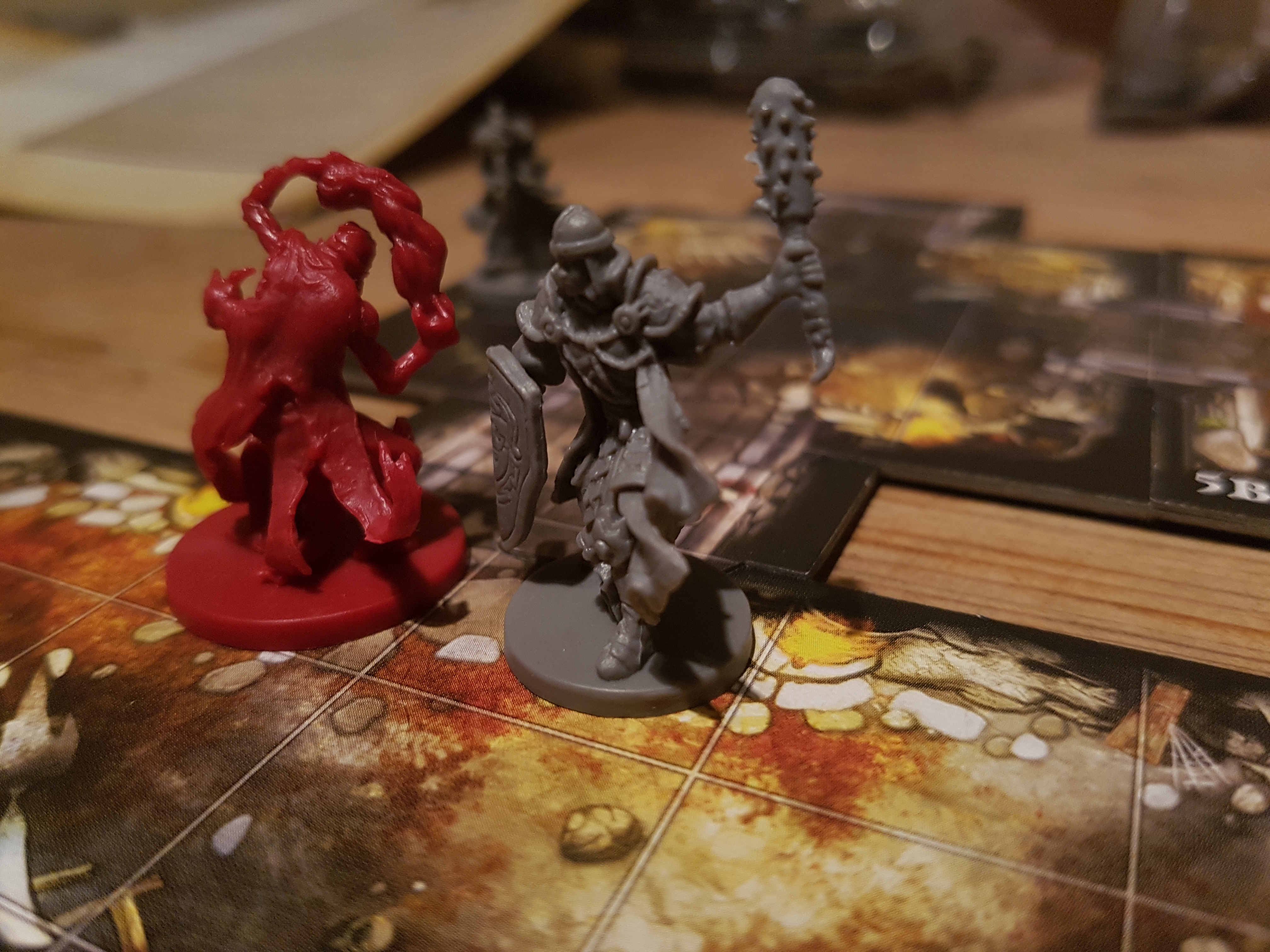 Loving it so far. Going to carry on with our quest later instead of going to the pub

That makes sense, it's got the same intensify mechanic going on. We've also got desert, which is a good one too.

That makes sense, it's got the same intensify mechanic going on. We've also got desert, which is a good one too.

Yeah, I definitely want to try the rest of the series.

Bought my wife Small World for Christmas as she's beaten me twice and really enjoyed it when we've played it at Ludorati in Nottingham.

We played it on boxing day and I destroyed her 160 to 76. I felt a bit guilty but she's still winning best out of 3

I went to Ludorati the other day for the first time and was really impressed. Nice set up. We spent an enjoyable hour playing Food Fighters and if they'd had a Wingspan in stock then I'd have almost certainly bought it as it looked lovely.

Also I didn't realise Pandemic was the same designer as FI, that's getting bought.

Played Quacks of Quedlinburg in Saturday which is good fun, and relatively simple, will know better what to do on my second play through, was really unlucky with my potion picks throughout the game.

Also played Clank which I really enjoyed, a self contained deck building board game, one friend was ridiculously lucky on the dragon picks but I suspect had we remembered to advance it properly she'd have died earlier.

Took part in a game of Gloomhaven, which was a bit boring. I suspect had I been in it from the start and not joined them after many games, several levels below and knowing what I was doing I might have had more fun. Didn't help that they chose to do a boss fight and open lots of doors so we spent the whole game getting our arses kicked until we died, and then had to wait around until everyone else died

So it all came down to this...

December 1 took a turn as gameplay shifted on head. We had the medic running around keeping things under control while rest searched and vaccinated.

My poor eyes let us down as I didn’t notice doubles later on - we should have saved Binoculars for then. Oops.

Ended up just failing the search by one and with only 2 cities to vaccinate.

Then we score! Another twist - we were high end Recovery underway, just short of ‘Disaster averted’. November’s unlucky draws really hurt us. I can’t see us playing again but there’s loads of max/min we mucked up (eg we used relationships we liked for RP/giggle reasons rather than potent combos)

Overall an amazing package that everyone should try. It’s use of changing dynamics and legacy elements blows the others I tried/seen out of the water.

Hexx, with pandemic legacy, is it supposed to be played one game per real time month? We haven't opened the box yet (we play regular pandemic thougn) and want to plan how we're going to go about it.

Victor Mistletoe wrote:Hexx, with pandemic legacy, is it supposed to be played one game per real time month? We haven't opened the box yet (we play regular pandemic thougn) and want to plan how we're going to go about it.

There are 12 months in the game

Each month you will play either one game (if you win first time ) or two games (if you lose first time you get a second go, then win or lose the second go that month is done)

With friends we decided to do every month (ish) throughout year so at most 2 games.

We did do one session of 2 months in one session but 3 games was a little much for us and 4 would have been for sure.

You could in theory do it all in one session, or do another structure eg a month every week. We just did it monthly as that worked for our calendars and getting together. There’s no ‘in game’ reason to do it monthly

You will be eager to do the next month but also too emotionally drained to play more than one game straight after the other. By the time you sort calendars with friends you end up roughly doing one game a month (more often in winter, more sporadic in summer because sunshine).

So no in-game reason to play one a month.

Thanks both! We can't wait to start it, will probably aim for a game of it on the first weekend of every month then

Our Descent game continues. We've completed one main mission, and just finished the second of two side quests which were nice and varied (the app throws up some great lore building and win conditions). This one started in the lower right of this map, with opening each door revealing more of the map and monsters/mystery items. At one point we were cut off from each other at the top right with a strawberry floating great shadow dragon between us, and endlessly spawning goblin archers coming in from the dungeon entrance

With good team work we managed to fend them off and get enough paces ahead that our only main worry was the spider mobs near the water at the end. This pic is one turn before we won

Another main quest is next. We love this game 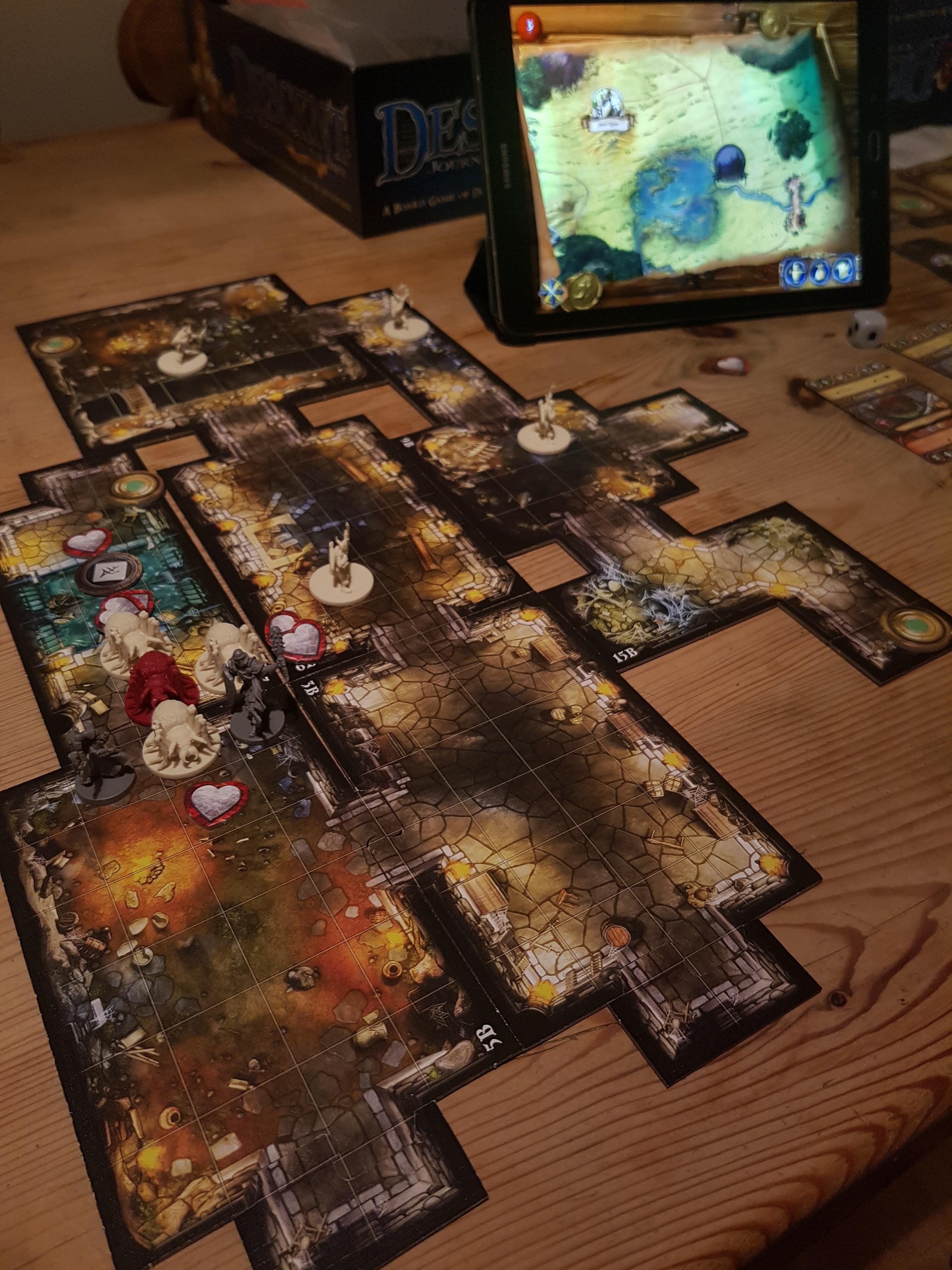 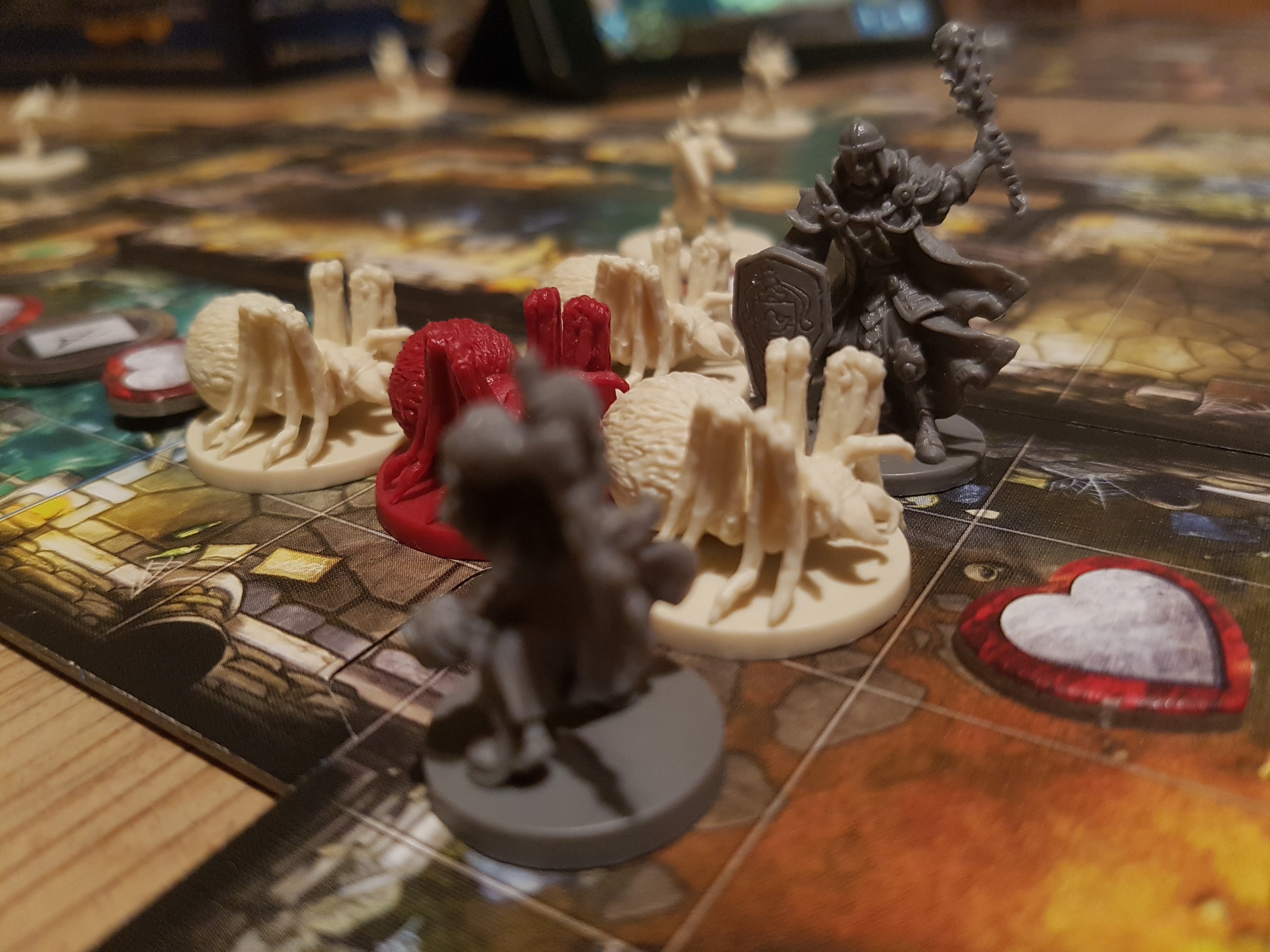