Seems strange to resign now, I thought he'd have wanted to give the league another shot after how awful they were this year. Wonder were he will end up and who will replace him.


Also Frank Lampard has been hired as Derby manager, will be interested to see how he gets on

Aging squad, star players want to leave, Barcelona resurgent. He probably recognised that he's done all he can at Real and wanted to get out while his reputation is at sky high levels. I think this might actually turn out to be a pretty shrewd decision on his part.

he's not wrong though; it seems like this one section of the forum generates most of the complaining and drama (aside from fanboy Sony/Nintendo trolling in the games section).
im not absolving myself of that either

If you'll pardon the generic use of the term, football generates a passionate response in an awful lot of fans - this is reflected in here and while I wouldn't presume to think that there's nothing offensive posted in the football thread, I don't think there's anywhere enough to label the thread and it's regulars as a cesspool, or cesspit or whatever it was. Equally, I do understand that to the outsider a lot of the "banter" that's thrown about in here might look quite petty, or insulting when it probably has been neither intended nor taken to be offensive.

To be fair to Karl, he makes absolutely no attempt to hide the fact that he isn't interested in football, nor is he bothered by this - the sport is an absolute non-entity for him. Which is fine, but you shouldn't then make a sweeping statement about a thread which you admit you're not bothered about, don't have a comprehensive understanding of, and that encompasses such a large proportion of the active posters.

This isn't to say people don't overstep the line on occasion, but I suppose my point would be that the people best placed to moderate such events are probably the mods who regularly post in here - Maf, Parksey etc.

I will point out however that I don't know what levels of moderation this thread requires, or how regularly reports are made to moderators from people throwing their toys out of the pram, or who are being wilfully ignorant. Hopefully it's no more than any of the other major threads - politics, Brexit, anything in the games folder etc. Without this information we can't really know where Karl's cesspool statement was coming from beyond it looking like a bit of a dig at the football watchers of GR(I'm not asking for this info to be made public btw).

For the record, I don't think the thread regulars are overly resistant to moderation either. The idea of not having results in the thread title was debated, voted on and decided quite fairly and democratically(I thought), for example. I also have no problems with Karl, anytime I've had dealings with him he's been a genuine bloke with real empathy for whatever issues have been going on and part of the reason I was wound up at the time is that it's a bit out of character for him to blithely label a thread in such a blatantly offensive way and pull Photek's posting privileges in the way he did.

For what it's worth I'd have no hesitation in saying that whatever disagreements are had in this thread, I reckon nine out of ten forumites would happily go for a pint with anyone else in here. I certainly would!

Err, anyway. TL;DR I don't think any of the football threads are a cesspit, enjoy reading them and get most of my football news from them.

"The Football Thread 2018- 19: YOU WON'T BELIEVE WHICH MANAGER HAS LEFT HIS POST"

Zidane makes sense. That team needs rebuilding-older squad, players leaving. It has peaked and they're miles off in the league. Quit while your ahead and go out with your head held high.

You know that's how the Football League thread is going to be titled for the next 250 pages.

Good to see ZZ recognise Liverpools moral victory on Saturday and step down. He won't be able to live with the fact the win was down to Ramos cheating and Bales flukey goal. Good on him. Corazon de Leon wrote:For what it's worth I'd have no hesitation in saying that whatever disagreements are had in this thread, I reckon nine out of ten forumites would happily go for a pint with anyone else in here. I certainly would!

Any managers been linked with the real job yet?

You'd have to imagine that Conte and Wenger will have their names thrown into the ring.

You know that's how the Football League thread is going to be titled for the next 250 pages.

Moyes is available and would be able to take Fellaini to the Bernabéu with him. Imagine.

I think the thread title should be changed to

YOU WON'T BELIEVE WHAT KARL CALLED US.

I wonder who takes over that job? Hopefully Sarri will say “up yours” to Chelsea and go there. 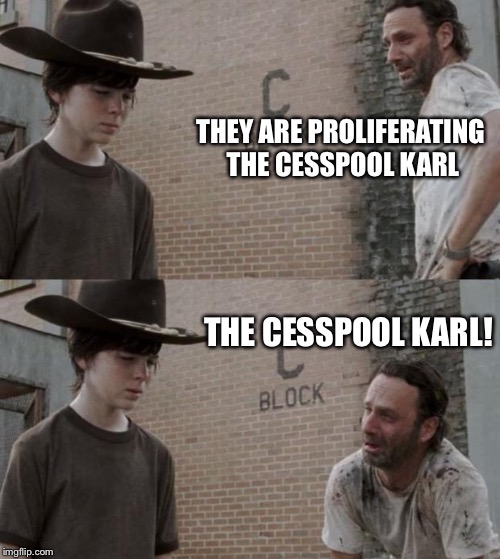 Dual wrote:Good to see ZZ recognise Liverpools moral victory on Saturday and step down. He won't be able to live with the fact the win was down to Ramos cheating and Bales flukey goal. Good on him.

so how many people have reported Karl's 'cesspool' post then?

<]:^D wrote:so how many people have reported Karl's 'cesspool' post then?

Are people really offended by that?

I found it hilarious.

Photek wrote:I think the thread title should be changed to

YOU WON'T BELIEVE WHAT KARL CALLED US.

Is it just this thread that's a Cesspool or is the Football League thread a cesspool too?

I don't know which cesspool I belong to!