Yeah, it's the UCS model. All the bags were numbered, and in order surprisingly enough, but rather than just two or three bags per section, it's about eight. And with the numbers faded on about half the bags, it does make things difficult in places when looking for a piece and realising you're missing a bag.

next month, and I've got the Ninjago City gardens lined up for the big day.

Looking forward to it. Do I rebuild the other two sets first so I can add the new set to the display?

Do I even have time?!

A section or two a day (depending on how big they are) and they should be finished before the big day and the start of the new set.

I guess you thought that sharing this info in the Lego thread would keep it under wraps, Lime? >>> Boom! <<< GRcadian Database updated!

I share your excitement pain, man - I have that anniversary this year, too

Memento Mori wrote:Well Brexit is noticeably hitting deliveries from the Lego website as well unsurprisingly. Time was stuff left the Belgium distribution centre within a day- my order's been there five days and counting.

I’m still waiting on my Bonsai tree ordered in the 4th to be dispatched. It was back ordered and should have been dispatched by now but the date kept moving.

DarkRula wrote: Probably have a hard time selling it on, though.

I'm waiting for the stock to go live again on that as well, you could order on Amazon with a backorder date of early Feb so fingers crossed it happens soon.

DarkRula wrote: Probably have a hard time selling it on, though.

No idea, yet. Be waiting until it arrives before sorting anything like price and such. We'd bought it for around £250, so probably near that price.

Further info including an offer when it goes live

The exclusive pack includes a certificate of ownership, an official LEGO Porsche card wallet, and four unique art prints based on Porsche 911 advertisements, all wrapped up in a collector’s wallet.

You’ll be able to snag the gift-with-purchase by ordering the 2-in-1 10295 Porsche 911 Turbo and 911 Targa when it launches for VIP members on February 16 at LEGO.com. The freebie will apparently only be available to VIP members, suggesting the availability window may end on March 1, when the set becomes available to non-VIP members in LEGO Stores and at LEGO.com.

LEGO Ideas First 2020 Review Results
Sonic Mania: Green Hill Zone
The review board has given Viv Grannell's (aka toastergrl on LEGO Ideas) Sonic Mania - Green Hill Zone the green light. We're excited to collaborate with SEGA and Viv to bring one of the most iconic game characters and brands to life via LEGO bricks on the basis of Viv's colourful and fun creation. Congrats Viv! Play features:
Create your own act by connecting the Green Hill Zone modules together.
Use the Technic lever on the spring module to launch Sonic and his Flicky friends into the air!
Help Sonic collect the ring and Extra Life while dodging the Motobug.
Sit Dr Eggman inside the Egg Robot mech.
Stomp through the zone with the mech's posable arms and legs.
Use the handle on the mech's extendable arms to perform a drill attack!
Stop the Phantom Ruby falling into the clutches of Dr Eggman and the Hard Boiled Heavies!
Rebuild into the "Encore mode" alternate build to continue the adventure - with additional modules, the Heavy King and his lackeys, the Master Emerald, and the Tornado!

I always thought it was weird that they got the Sonic license for Lego Dimensions but then never made any kits to go with it. Wonder if this'll lead to some larger non-Ideas Sonic sets.

(there was a Bonsai set and "Lego Doggos" in the latest batch of 10,000 club entrants)

Almost seems like they need to change the criteria for what does and doesn't get reviewed, considering the amount of sets that hit the 10,000 mark and then immediately get cut down. 35 sets reviewed, one is actually getting made.

I always think most of the stuff which they don't approve is more interesting than what they do. I like the Van Gogh however.

The order I'd placed from Lego on the 12th of January has spent weeks going from Oldbury, Leicester and Belgium.

According to DPD, it's due to finally arrive tomorrow.
Taking bets on how strawberry floated it is.

Just noticed the next batch of Ideas 10,000 club they're reviewing includes a Lego Colusseum

There's another one that's clearly not getting approved 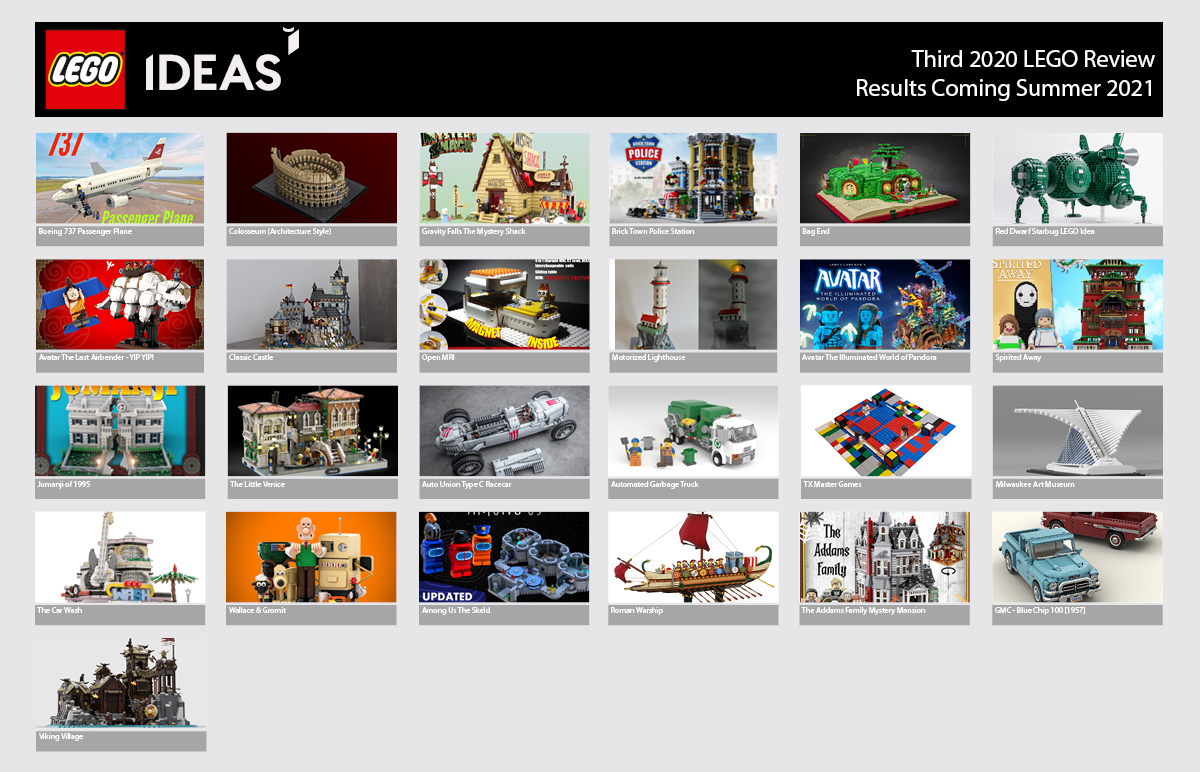 Just noticed the police station, too

They really need to filter these a little better

LewisD wrote:The order I'd placed from Lego on the 12th of January has spent weeks going from Oldbury, Leicester and Belgium.

According to DPD, it's due to finally arrive tomorrow.
Taking bets on how strawberry floated it is.

I've had the same issue when I ordered my Lego on 1st of January and it arrived almost three weeks later. I rang up to Lego and they said it was an issue with Brexit and Covid-19 test for the drivers.

You should get it tomorrow.

The knock-off LEGO UCS Falcon is complete, after two or so weeks of building. It does look great now it's fully built. Dunno when I'll get another set, but it will be a lot of fun. Since the Speed Champions Mini Cooper set seems to have been discontinued, I could do with a new one of those to finally get my hands on.

Also, if... anyone needs any guns... I've got enough here to supply a minifig army.

Mate that looks awesome! You'd never know at a glance that it's not the official one.
I gotta get me one of those

It does look awesome. And that display stand would be great if I had the room. Unfortunately, it'll probably only last a few weeks before being stripped down again. I also had some trouble with the minifigs, so Rey is currently manning the lower gun platform (which is inaccessible once fully built) and old Han Solo has broken both of his ribs (the characters are in pieces so they need building as well. I perhaps applied a bit more pressure than I should have trying to get one of his arms onto the torso).

That replacement I mentioned two weeks back is in transit from Hong Kong, so an eBay listing should be going up in about two weeks from now. It will be collection only, though.

only had a a quick look but honestly struggling to see the difference between yours and mine. looks great. how much was it?

Can't remember the exact price, but I know it was more than 50% less than the RRP.