The moan about your neighbours thread - Stool Bloke returns...

I've got a reverse moan for you! Over the weekend and for the bulk of this week, the whole road has been in near silence, it's been utter bliss. I stood in the garden last night with the dog and I couldn't hear anything, no cars, people, nothing. Wonderful.

The calm before the storm...

I picked up a strimmer over the weekend so looking forward to firing that up next time Calvin and Steve are in the back garden.

GG - what happened with the TikTok mansion you're living next to?

Red wrote:I picked up a strimmer over the weekend so looking forward to firing that up next time Calvin and Steve are in the back garden.

What about dual-wielding it with a pressure washer or leaf blower?

GG - what happened with the TikTok mansion you're living next to?

I think they might have had possibly one bunch of people in, potentially new owners(?) as a guest mentioned something about "oh this is [not nice]" (referring to outhouse / small slave house / "studio/outhouse/office" according to the estate agents) at 1 in the morning, followed by "oh we're going to do it up and make it nicer".

I've heard a bit of trampoline which doesn't bother me much (even if it is a classic annoying sound) but the most notable revelation in my very exciting life working from my home business, for years we have heard one of those comedy horns installed in some vehicles that goes like, "babada bah bah! babada bah bah!" But it's really long, and must be made of multiple horns, as it continues with "doobie doobie doobie do". For years I thought this was a small school or private bus driver with a sense of humour blowing it on the way up the hill. Actually, it's installed in the strawberry floating abandoned VW campervan in their garden, they literally just pop into it ditched in the sticks to set the horn off for lulz. strawberry float these people.

First it was the Casio drummer doing boring ass practice beats at 10pm on the dot for hours, then the PA appeared (which I thought was another property), which became DJing with the foghorn sounds assigned to some kind of button until 3:30am, at the same time there was the chickens setting off every other morning, then the stoned jumping whilst drivelling on about inane drunk shite on the trampoline, and now I discover that the comedy horn... All come from the same place.

I wish I had small nuclear capabilities but am fully prepared to launch a full scale sonic war if it gets bad again, fortunately, they seem to have got the message.

But it doesn't make sense for the property to have sold, I must have overheard that conversation from somewhere else, because why would they sell the VW campervan along with it? I suppose if you are paying over one million for a house it's just par for the course to chuck in a vintage vehicle or two along with it. And a trampoline.


^ What i imagined in my head.

I know the one you mean, it's the la cucaracha tune.

Actually it's pretty similar to that melodically, and I'm a musician, so I bet it's about 80% those notes, perhaps transposed up or down.

Victor Mildew wrote:I know the one you mean, it's the la cucaracha tune.

You know what kind of people we are dealing with when someone installs that in a VW they don't even drive in their back garden. Stool bloke is a strawberry floating legend compared to this.

Edit: according to Wikipedia

The basic song describes a cockroach who cannot walk.

Or in this case a VW campervan that nobody drives parked in a bush. How fitting.

Green Gecko wrote::lol: Actually it's pretty similar to that melodically, and I'm a musician, so I bet it's about 80% those notes, perhaps transposed up or down.

I too am also a musician

Green Gecko wrote::lol: Actually it's pretty similar to that melodically, and I'm a musician, so I bet it's about 80% those notes, perhaps transposed up or down.

I too am also a musician

I was replying to aaron btw.

As treasurer and data protection officer for GRcade, may I request a crowd frowning at this particular estate. I hereby conscript you.

NOTE: You need only apply if you, too, are a musician. For this is a sonic war after all.

And you have my (violin) bow.

And my axe (guitar)

Had a letter from the council today saying that rats have been spotted in the gardens here (can only assume someone sent a report of some kind).

Absolute bollocks, we get squirrells, frogs, the occasional mouse, but never rats.

The only rats around here are the people in no.5!

The giant gnome has been thrown in the skip! 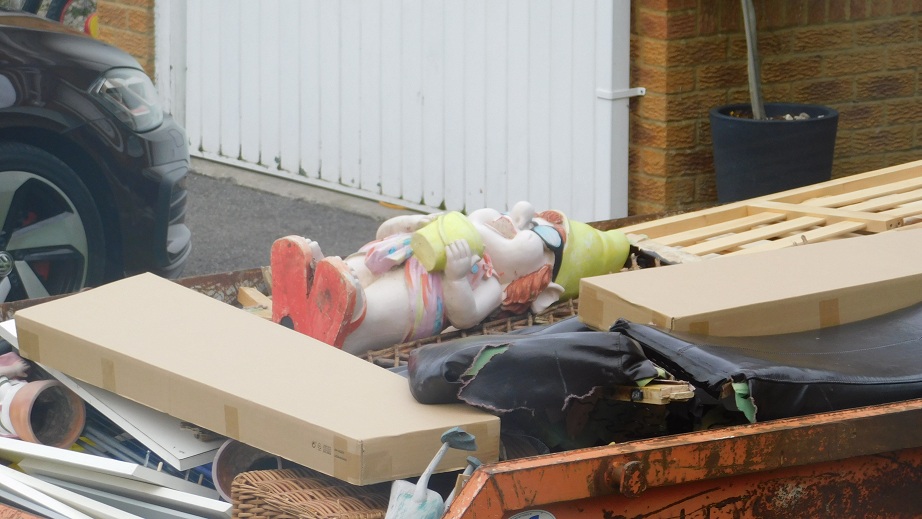 IT MUST BE SAVED! If only as the ultimate collector's secret Santa gift