Just seen it too. Incredible behaviour. He must have so little to live for to do something as stupid as that. He will get prison time for it at least.

Absolutely shocking. Much respect to the players on coping with the situation; the attacker deserved a good kicking but the Villa and Birmingham players who cooled down others did brilliantly.

As Finish.Last said, thank goodness the attacker wasn't armed. It's strawberry-floaters like this which could result in fences / barriers being reintroduced to football. Awful behaviour and he should face strong punishment.

Edit: And some fans were cheering the attacker

Irene Demova wrote:Shows how strawberry floating useless the supposedly necessary police presence at every game is tho

The security / police numbers are relatively small compared to the crowd numbers; they're not "useless" but they can't cover every scenario. It's strawberry-floaters like this attacker who could cause barriers to be reintroduced.

I’ve heard Birmingham will be docked points and made to play behind closed doors. Seems fair.

PostRe: Football League Thread - INSIDE! TEN Reasons Why Football Should Be Outlawed
by more heat than light » Sun Mar 10, 2019 1:02 pm

Blue Eyes wrote:I’ve heard Birmingham will be docked points and made to play behind closed doors. Seems fair.

No chance they'll be docked points. Closed doors is a possibility though.

They're already looking at a points deduction for their FFP shenanigans. I imagine this incident today has made the FA's decision on that a little bit easier.

Regardless of that, I think a points deduction would be a reasonable punishment for this. It's absolutely appalling, and there has to be (as Lil' Lee Hendrie said on the TV) a line drawn in the sand for this.

Anyway, back to the football itself; it's so sad to see Grealish being kicked and pushed all through pretty much every game he plays. I love the guy, but I wouldn't blame him at all for wanting to move to a Premier League club where he might be able to play his game without fear of constant booting.

And sort of related, and I know it's a hard job and all that, but good grief the standard of refereeing in this division is so bad.


I called off his players' names as they came marching up the steps behind him....All nice guys. They'll finish last. Nice guys. Finish last.

Yes Grealish! Love that so much.

Just seen that attack on Sky Sports' Facebook page. One of the great things about English football compared to other places in the world is the fact we haven't got barriers and fences all over the place - sometimes resembling something out of a prison - it'd be a terrible shame if that had to ever change. Harsh sentencing and lifetime bans need dishing out.

Yeah they have to throw the book at Birmingham, there has to be a hefty precedent set. Make sure anyone that does that sort of thing an anathema to their own teams fans

Really glad for Grealish as well.

I love winding up Glowy, but Birmingham really do seem to have the scummiest fans. What the hell is wrong with people?

My one experience with Birmingham City supporters saw them throwing coins at the home support - they hit a 70 year old woman. No sympathy for them whatsoever.

Absolutely made up Grealish got the winner, things could get very interesting if we get a result off forest or boro now. Buzzing!


This does actually look like one of the stewards getting marched off after Grealish scored. Apparently he kicked Grealish while he celebrated. For goodness sake, BCFC 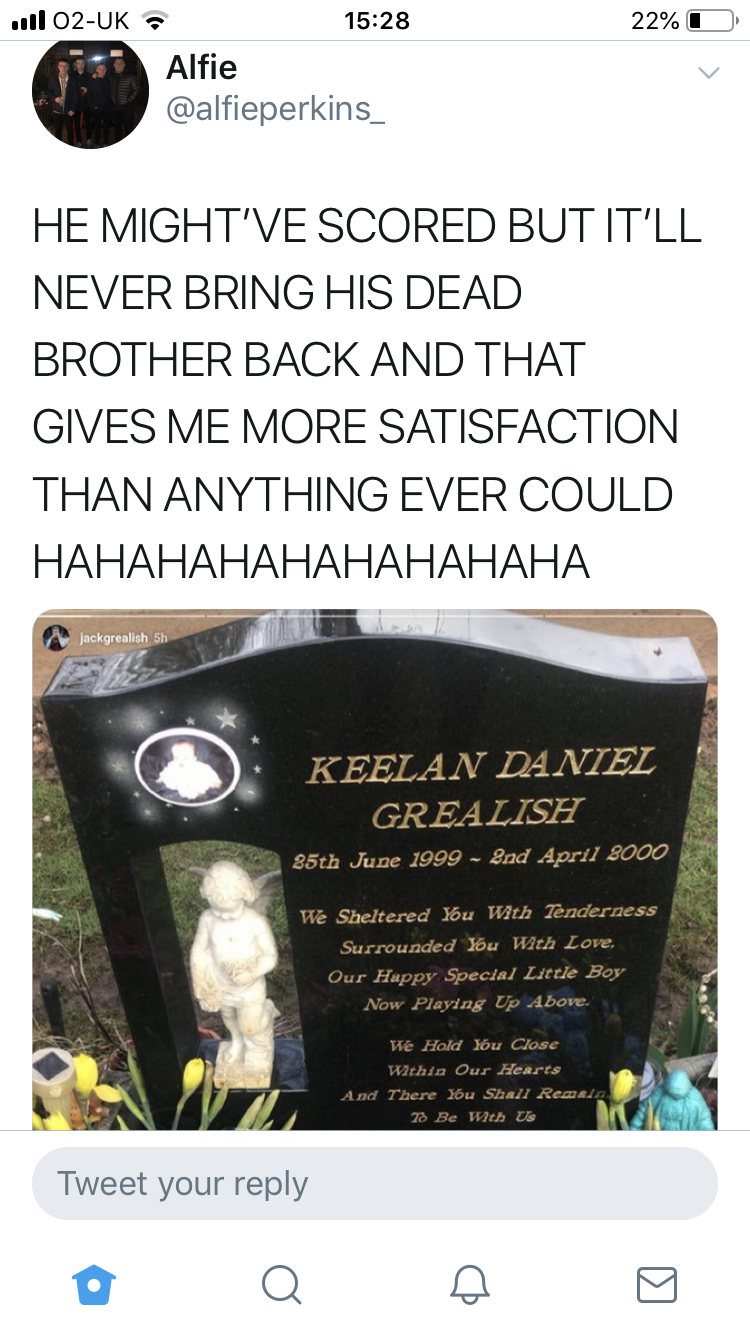