Hello all, few weeks into 2019 now and some series have already started (Formula E) or are starting soon (WRC this weekend), so I thought I’d make this a general motorsport thread although I daresay F1 will still be its main focus/attraction over the course of the year once it gets going. I’m not 100% sure on car launch dates but think most are mid February (with some teams like Toro Rosso nearly always opting to unveil on the morning of the first test day), so not even a month to wait till we can first see the 2019 cars on track

The F1 schedule is as follows

Good news for Sky viewers, they’ll be showing some of testing live (last done in 2013 if I remember correctly).

Both tests are once again being held at the Circuit de Catalunya, lets hope for warmer weather and no snow in 2019 like we had in 2018!

As you can see, we have a few complete rookies in Lando Norris, Alexander Albon and Gearge Russel and then we have Antonio Giovinazzi who has completed a few races back in 2017 when he stood in for Pascal Wehrlein. We also get to see the return of Robert Kubica who last raced back in 2010. Sadly this season Channel 4 only have highlights for all the races, barring one which is the British Grand Prix, I imagine this will make viewing figures fall as free to air (live F1 at least) is at a bare minimum in 2019.

So what is everyone predicting for 2019? As much as I want to see Vettel lift a WDC and WCC at Ferrari I just don’t see Mercedes faltering, if they do win the WDC it’ll certainly be Hamilton lifting a 6th WDC rather than Bottas getting his first (unless he finally challenges Hamiltons lead position in the team with a string of strong performances at the start of the season).

I actually think LecLerc will prove a good challenge for Vettel as well, weather he’ll be allowed to fight for the WDC is another question though, Seb may have one more solo crack at it before they let both drivers fight it out if they have a capable car.

There will be a lot of good teammate fights as well, one I’m particularly looking forward to is Hulkenberg vs Ricciardo, Hulkenberg has a very good chance to show just how good he is against Ricciardo, a proven race winner.

Has anyone been watching any other forms of motorsports in the off season? Formula E has recently started up again and I have to say the second race was fantastic. I’m also looking forward to the WEC getting back underway and I try to watch the WRC highlights when I get chance (although sadly that’s not too much), that’s starting back at the end of January in Monaco. Moto GP is also back on March 10th, I tried to watch a bit of this last season but it never really grabbed my attention as much as the 4 wheel alternatives

If I’ve missed anything please feel free to post and I’ll edit when I get chance, Think that’s about all for now, so discuss! (If you want, not going to force anyone)

I'm all for other motorsport being discussed in here.

I have been enjoying Formula E since they introduced the Gen 2 car and ditched the mid-race car swaps although Attack Mode is another gimmick I could have done without.

As much as I hate it, I reckon Hamilton and Mercedes will win the double yet again. I'm most interested in seeing how Leclerc fares at Ferrari and getting to see more of the rookies as I only casually followed F2 last year.

Hopefully McLaren will finally get their house in order now that they've done lots of restructuring and made a few big hires.

Unless Merc significantly drop the ball it should be their season again. Since there are no major regulation changes, Ferrari will need to improve even more than they did between 2017 and 2018 as I believe Hamilton won with a bigger margin. Their main weakness is development, so hopefully the managerial changes can see them rectify that.

It remains to be seen if any pressure from Leclerc on Vettel will hamper them. Vettel doesn't deal well under pressure so I could see that being counter productive. I'd also like to see Renault beat out Red Bull as a bit of justice for Horners behaviour towards them and Danny Ric deserves a good car.

As for McLaren, if they don't make significant progress they might want to look at getting Big Ron back.

I think it’s a good idea to have general chat about motorsport in this thread.

The best part of the season is approaching, car reveals where you get to see the tricks The teams have come up with.

I'm just grateful C4 have highlights, as otherwise i would not have been able to watch at all (sky is too bloody expensive).

On a separate note...

Liberty want a second race in China, i didn't think they could attract enough people to one event let alone two.

Ad7 wrote:The best part of the season is approaching, car reveals where you get to see the tricks The teams have come up with.

If it's anything like last year, the only noticeable differences between the cars will be the colour schemes.

Nah there's loads of cool details to see, Ted's notebook in testing is brilliant for it, especially development corner

Yeah Ted’s notebook/development corner is really good, especially on the last day of the first test when he gets loads of high res pics up on his laptop and goes through the small details each team have gone for on different areas of their cars

Will Hamilton wipe the floor with it again? I think he will to be honest.

Lot of motorsport on this weekend then, WRC in Monaco starting today till Sunday, Formula E on Saturday and Daytona 24 hours as well.

2 hours to go and Alosno is showing his class in these ridiculous conditions.

I wonder if they've ever considered a relegation system for teams between F1 and F2?
It could add a bit of spice to the back of the pack battles.

Jam-Master Jay wrote:2 hours to go and Alosno is showing his class in these ridiculous conditions.

Yeah, just a crying shame he saw out his F1 career (well the first part of it, he might fancy coming back if he can get a top seat or McLaren produce a race winning car) in a massively uncompetitive series of McLaren cars.

Peter Crisp wrote:I wonder if they've ever considered a relegation system for teams between F1 and F2?
It could add a bit of spice to the back of the pack battles.

Never say never but I can never see this happening. Running a F2 team must cost a fair chunk even with the spec car but F1 must be on another level when it comes to finances so even heavily subsidised I don’t see how any of the current F2 teams could compete with any of the F1 teams, we could see an even bigger field spread while for racing purposes we want (and need) a close field.

I won’t lie though, it would add an extra level of tension going into the latter parts of the season and would mean the teams near the rear had to push on development to stop themselves from getting relegated down to F2 for a season.

Only way I could see this working is if a lot of the parts of an F1 car were standardised, so the teams only had to worry about making (or sourcing) a power unit and making their own aerodynamic packages, thus with the (hopefully) impeding cost cap the idea has a lot more merit if the governing body gave newly promoted teams a substantial financial boost for their first season, alongside making F1 a much more cost effective series (if it ever could be considered cost effective) to compete in.

damp wet end to the 24 hours of Daytona. Well done to Alonso and Wayne Taylor Racing. 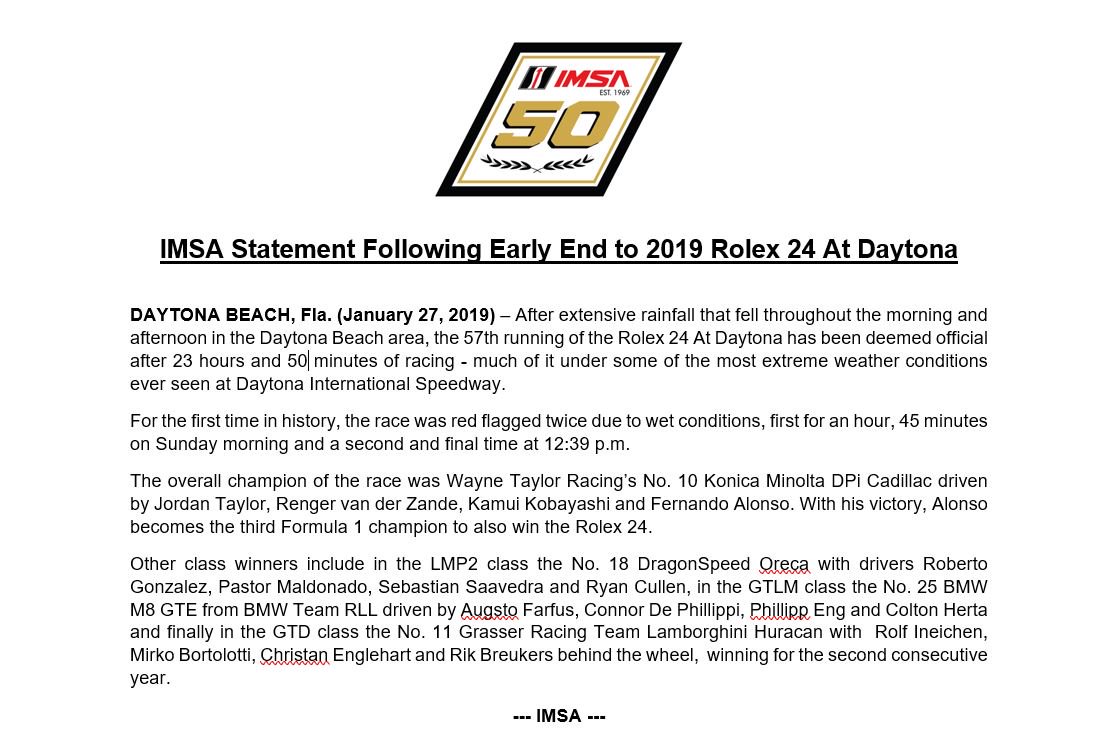 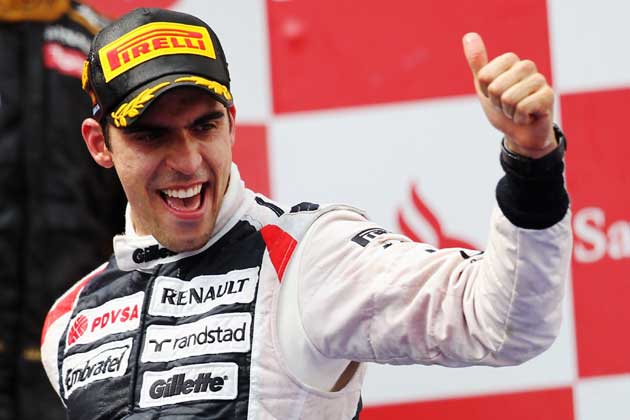 You can't lose if you take out all the competition

The man deserved a much longer F1 career.