I think that’s what Liberty we’re hoping they’d be able to do to almost bypass the 14 day quarantine rules.

I've just found my photos from when we went to the Canadian GP back in 2012. Got some amazing pictures in there!

Victor Mildew wrote:I've just found my photos from when we went to the Canadian GP back in 2012. Got some amazing pictures in there!

Looking forward to seeing them (i assume you'll be posting some).

Here are some of my photos from when we went to the Canadian Grand Prix back in 2012 (these are a few I took hundreds and hundreds).

Before this race, we'd only been to Silverstone, and it cost a fortune to have seats at copse which were kind of meh considering the price. I looked in to how much Canada would be, and the difference wasn't nearly as much as you'd think. Let's make a holiday of it then

At the time, we were members of the McLaren F1 fan club, which gave you all sorts of benefits, and also exclusive competitions. We'd entered one a while after booking and thought no more about it. About 5 days before we flew I received an email from McLaren...

We'd won! What was the prize? A VIP TOUR OF THE F1 PADDOCK AND McLAREN GARAGE

We had to meet them on the morning of 1st free practice (Friday) at 9am sharp, by the bridge that crosses the track by the wall of champions.

We were given our passes: 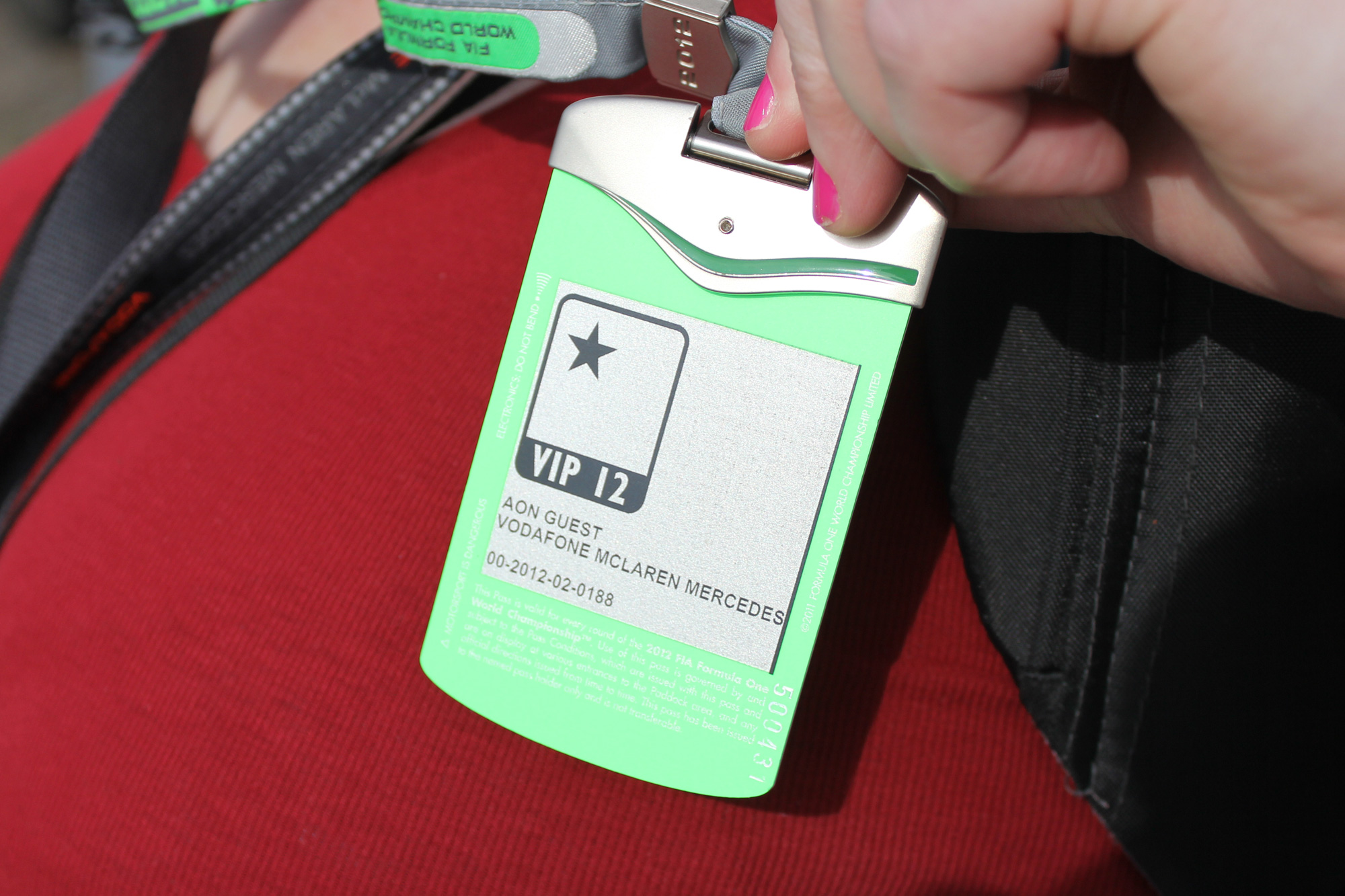 And led in to the paddock club, where the guide took us to every team's little area behind their garage (the pit area there is tiny, it's about 10 foot from the garage backs to their little bits, as there's no room for motorhomes there).

On the way down we bumped into Fernando and Kimi. I also awkwardly stopped Ted Kravitz, stuck the camera in his face and didnt have much to say.

He was good about it though : 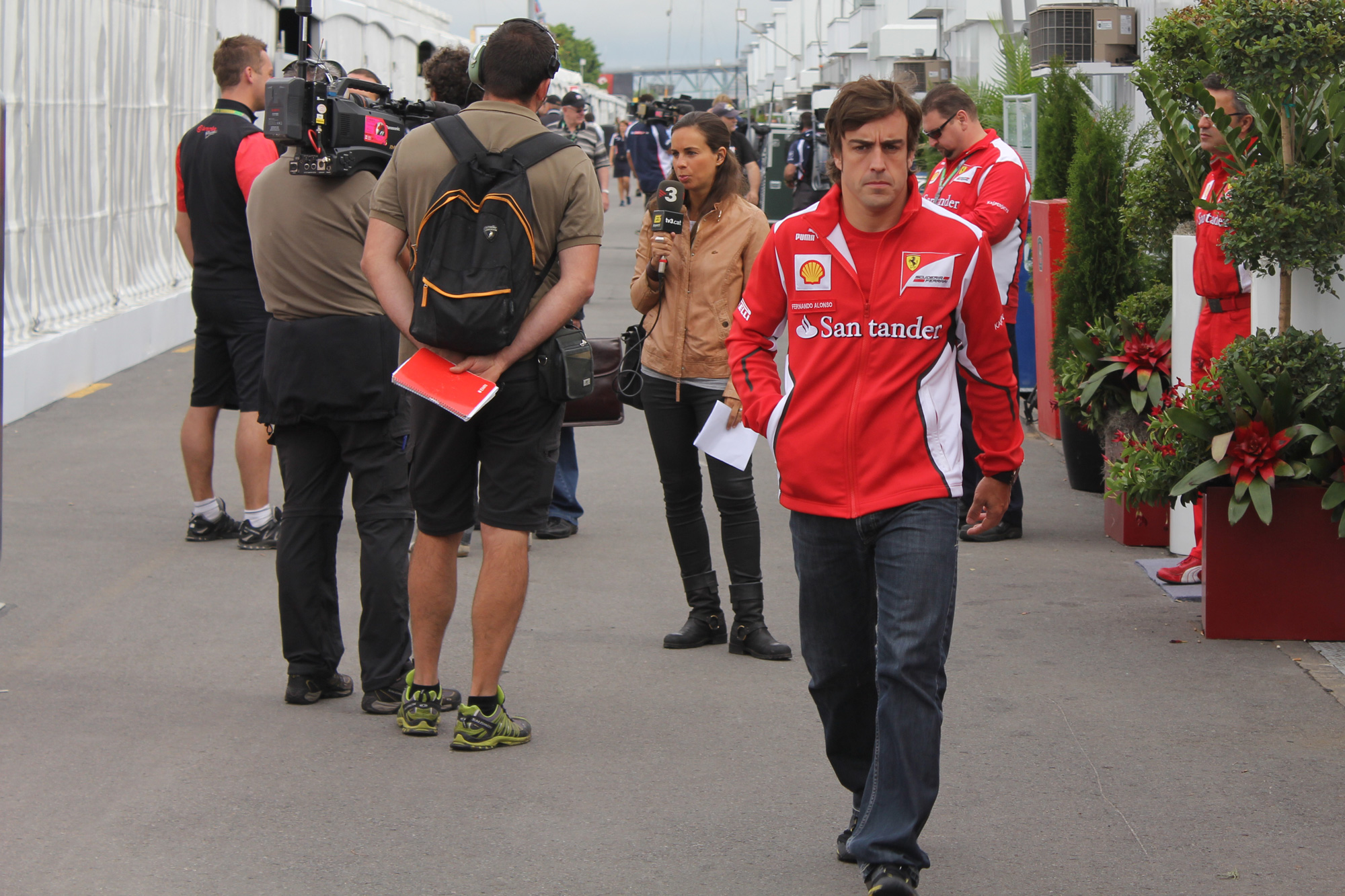 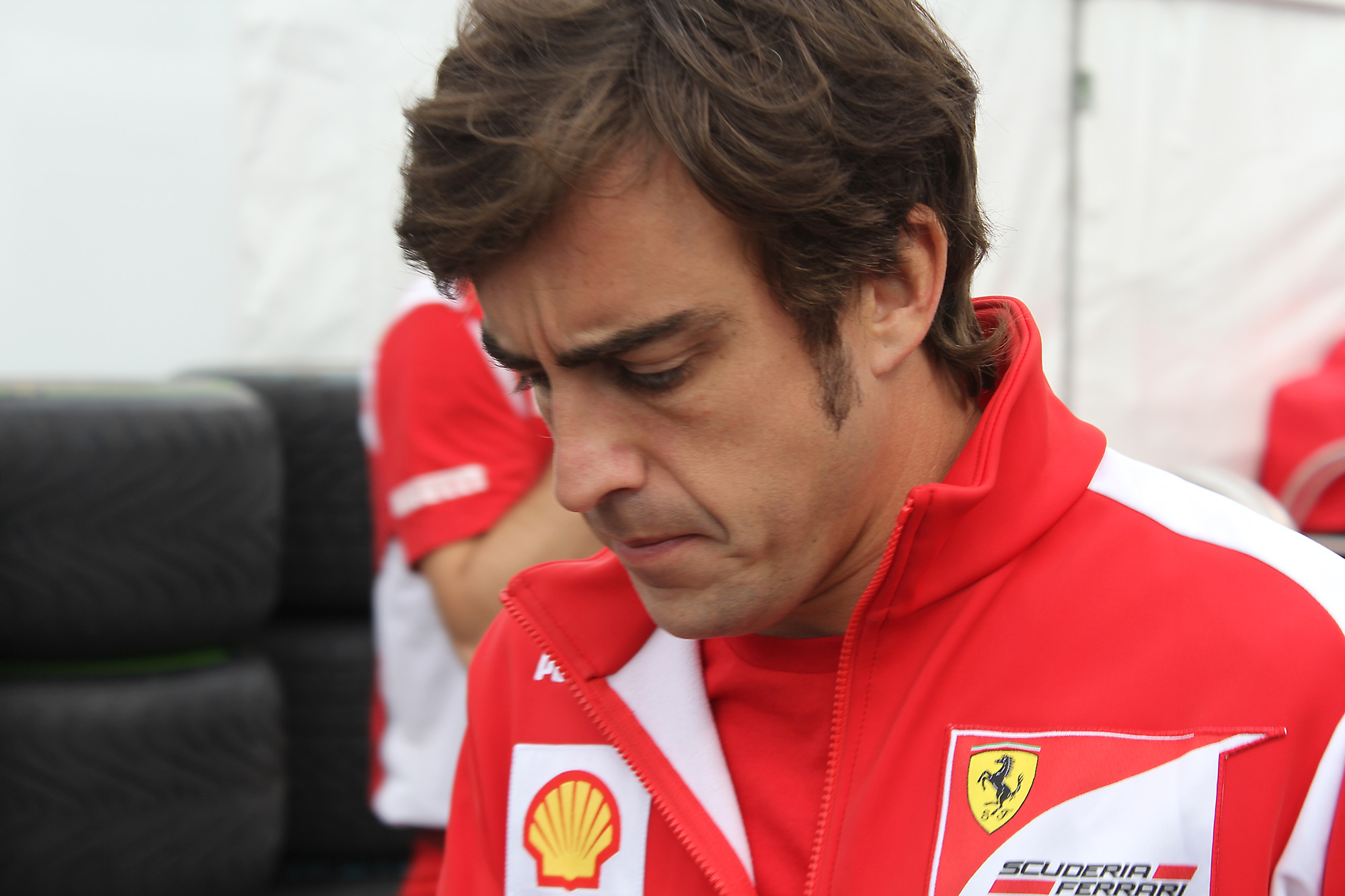 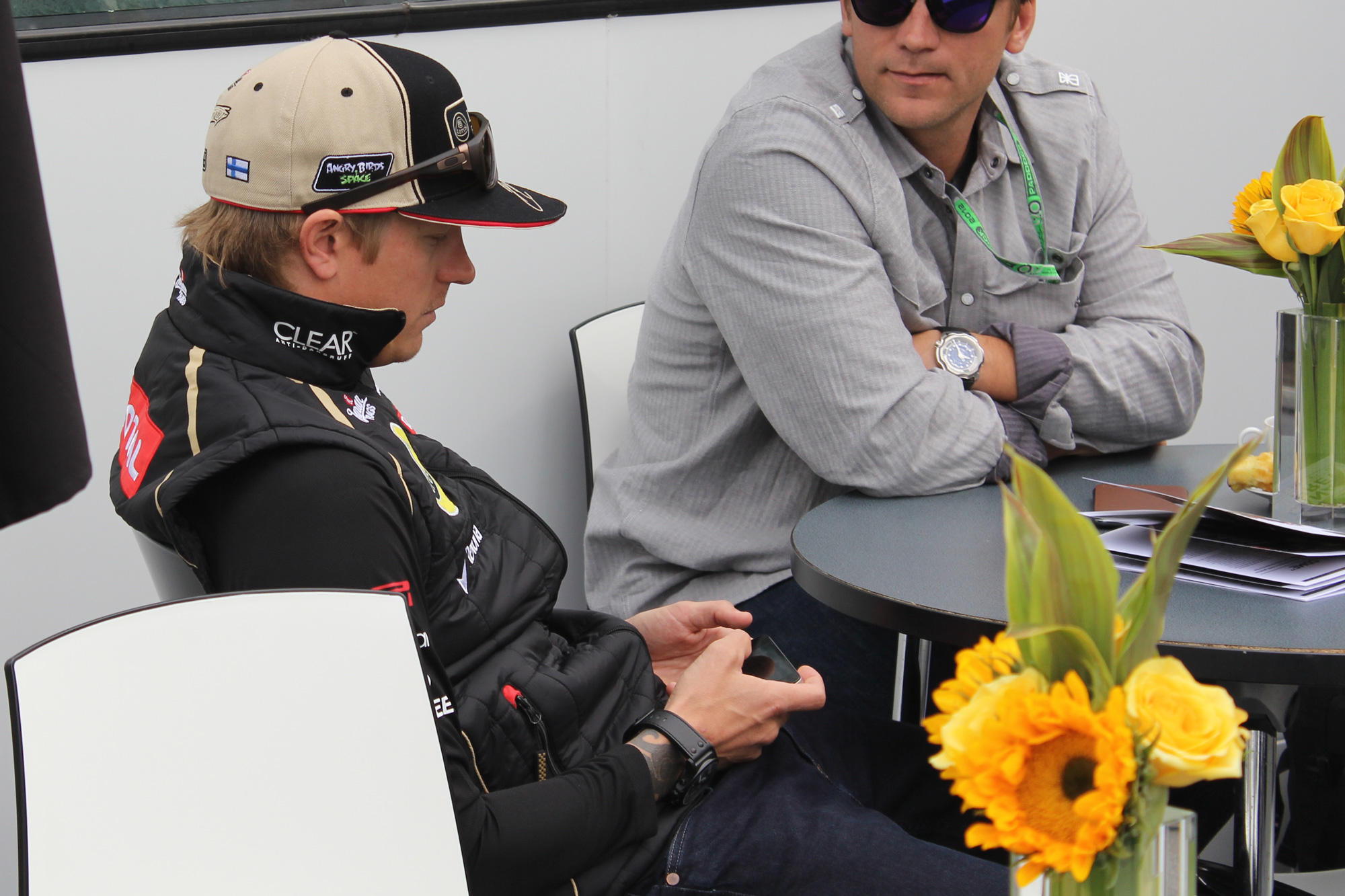 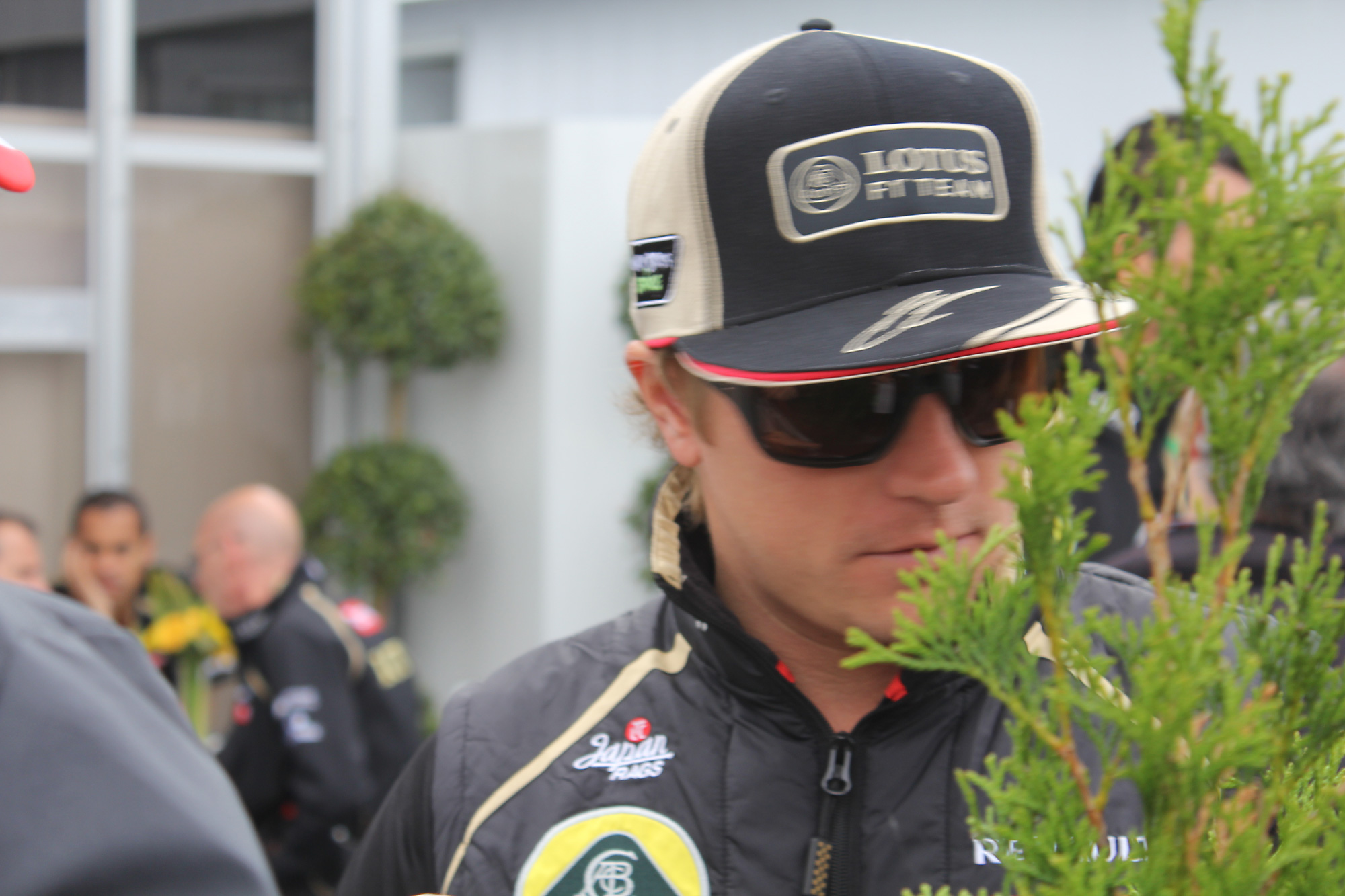 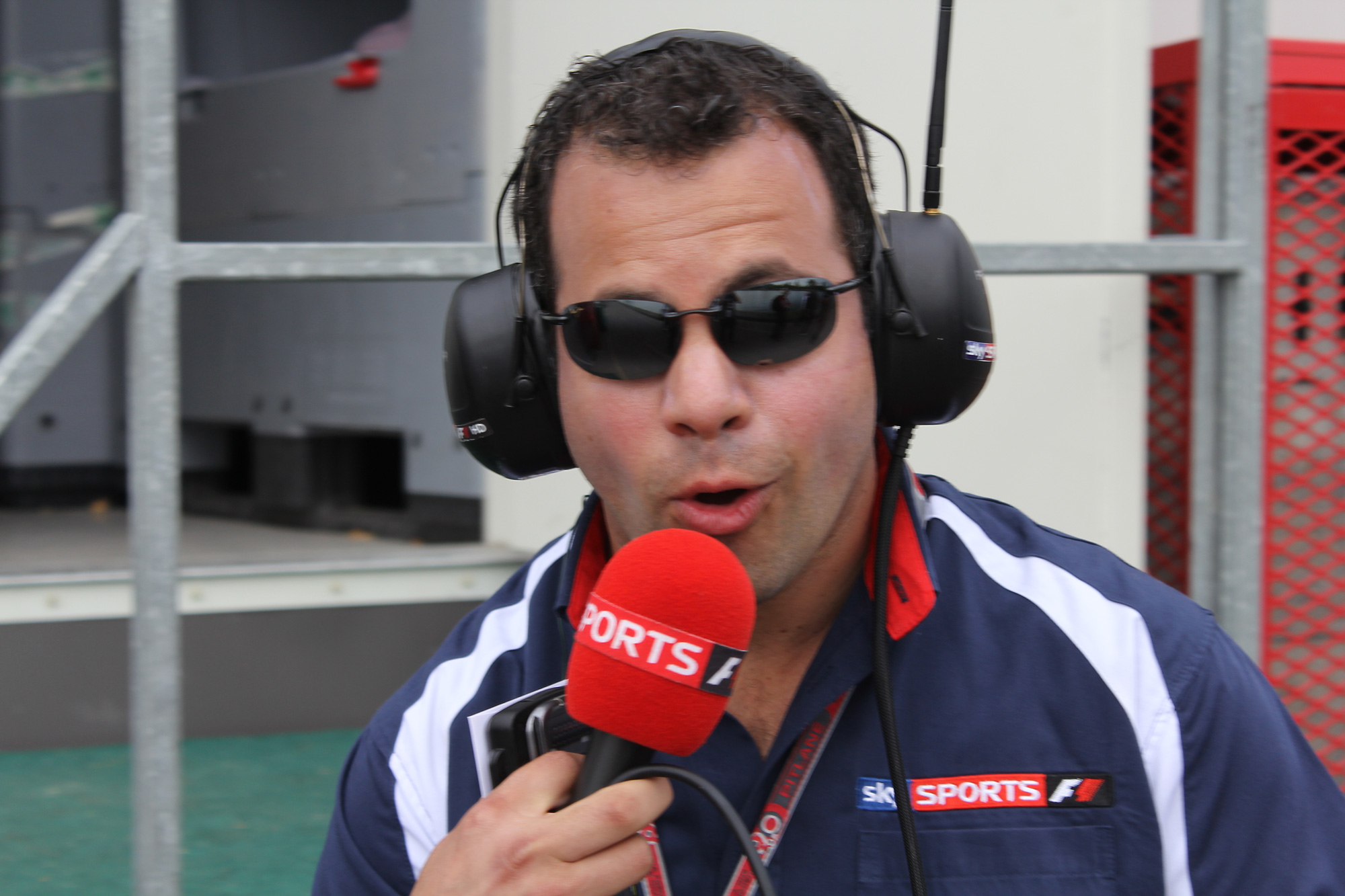 We were then taken in to the McLaren garage, and I almost threw up with excitement

It was so strawberry floating cool to be in there. We had to go straight through to the front as the engine covers were off, so we couldn't go back in to take photos until they were back on. I got to sit in the VIP box they have in the middle back of the garage and have a good look from there. From the front you could see in to the Red Bull Garage on the right, and Ferrari on the left. 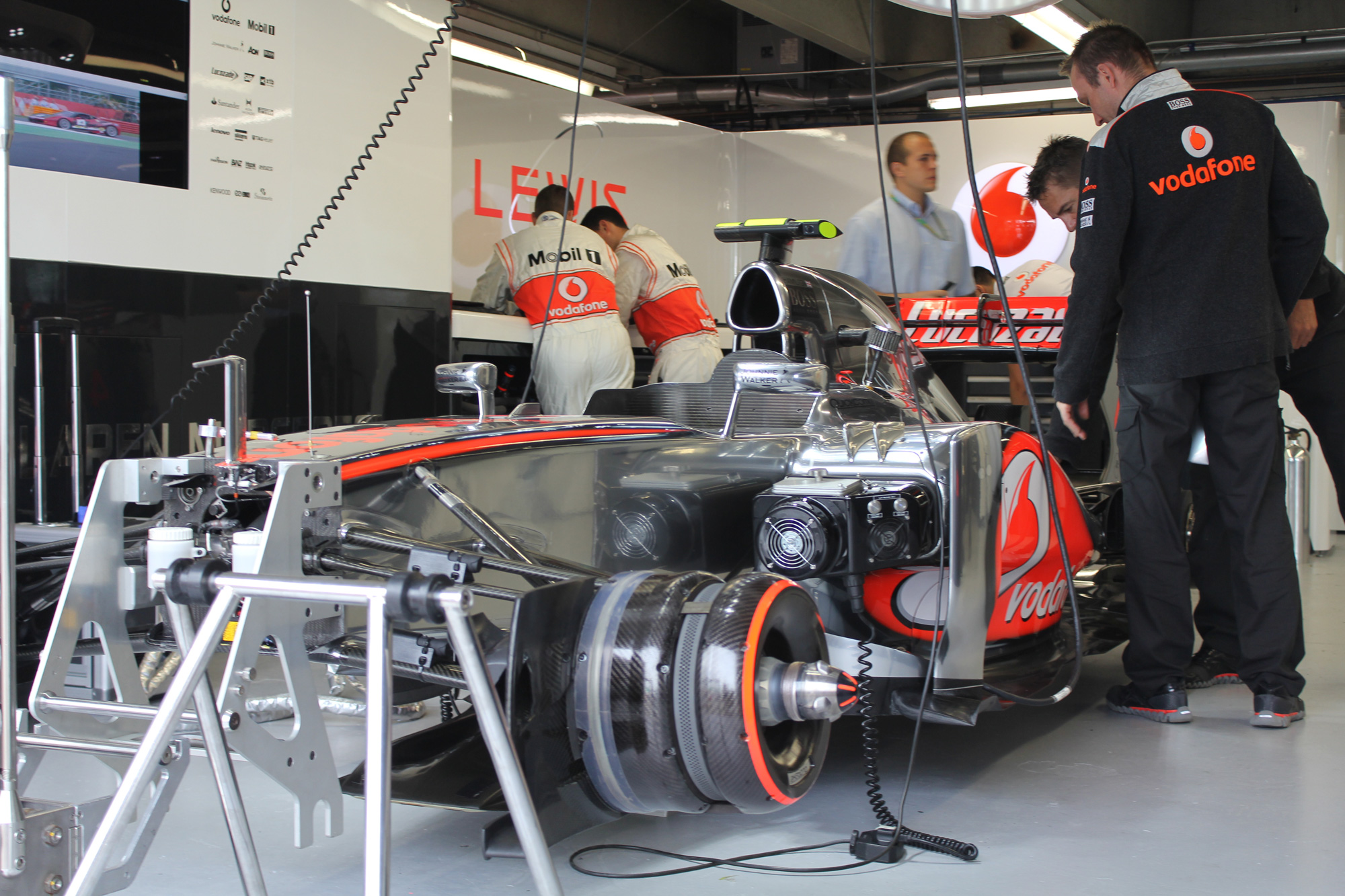 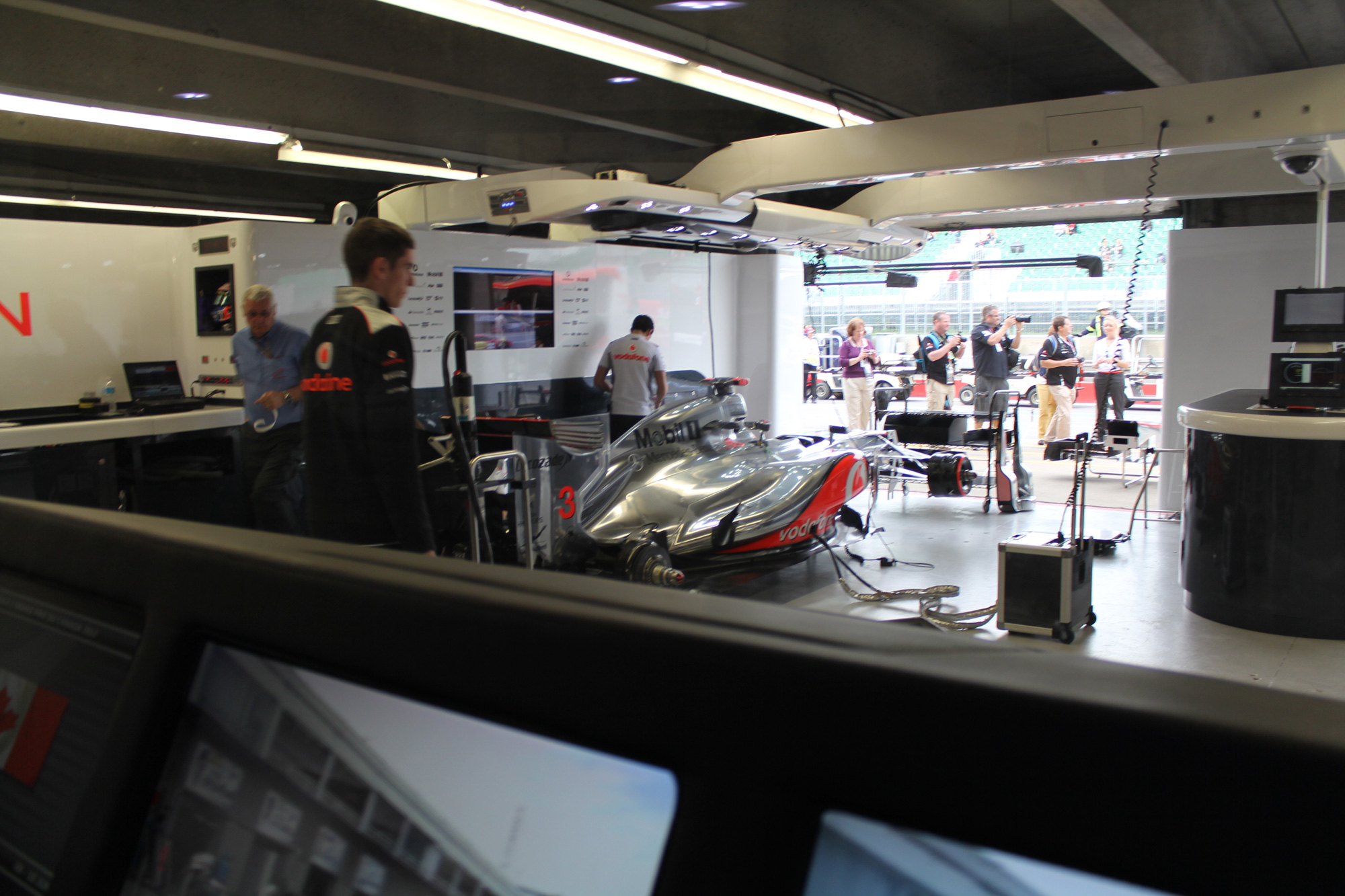 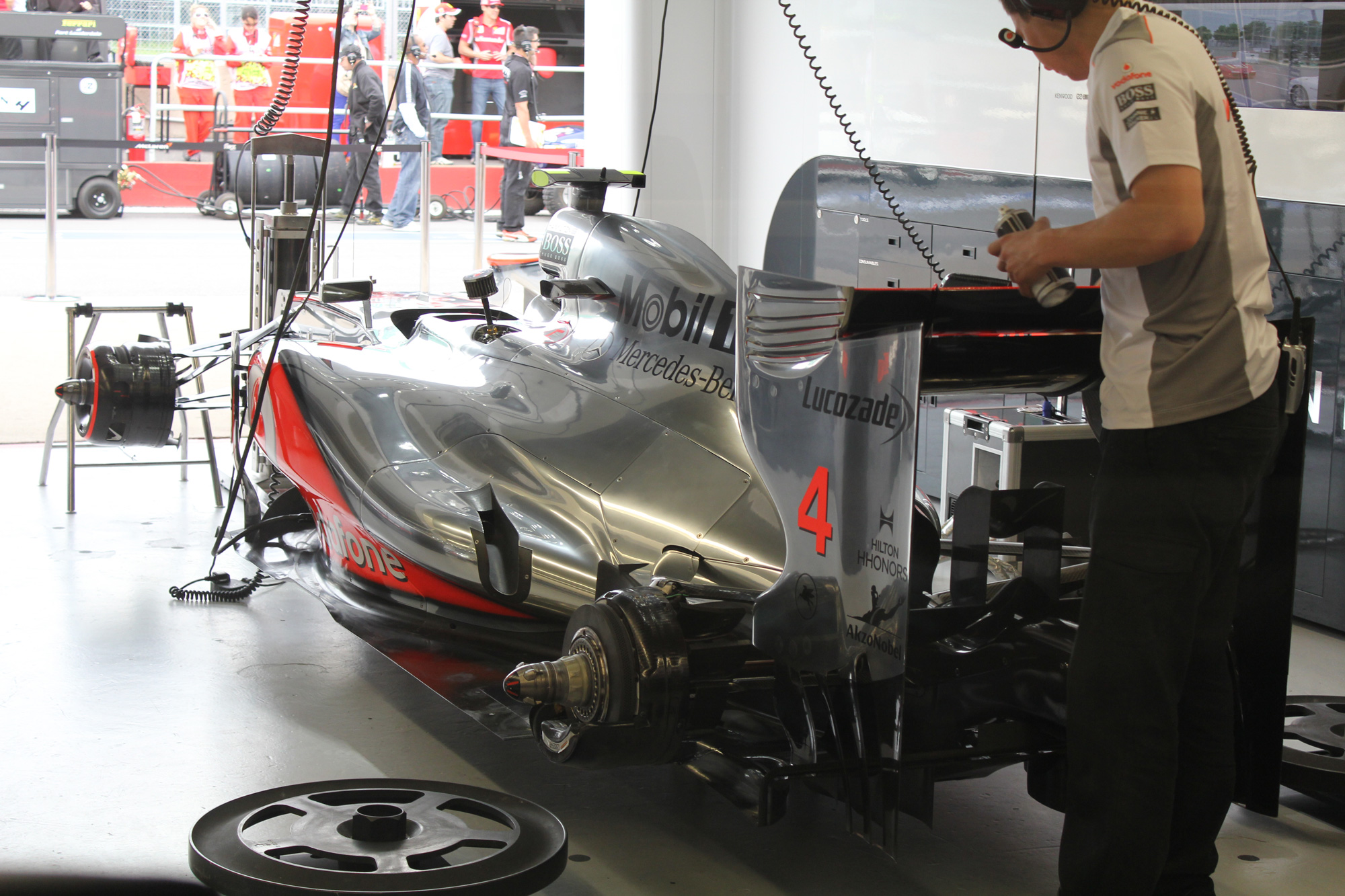 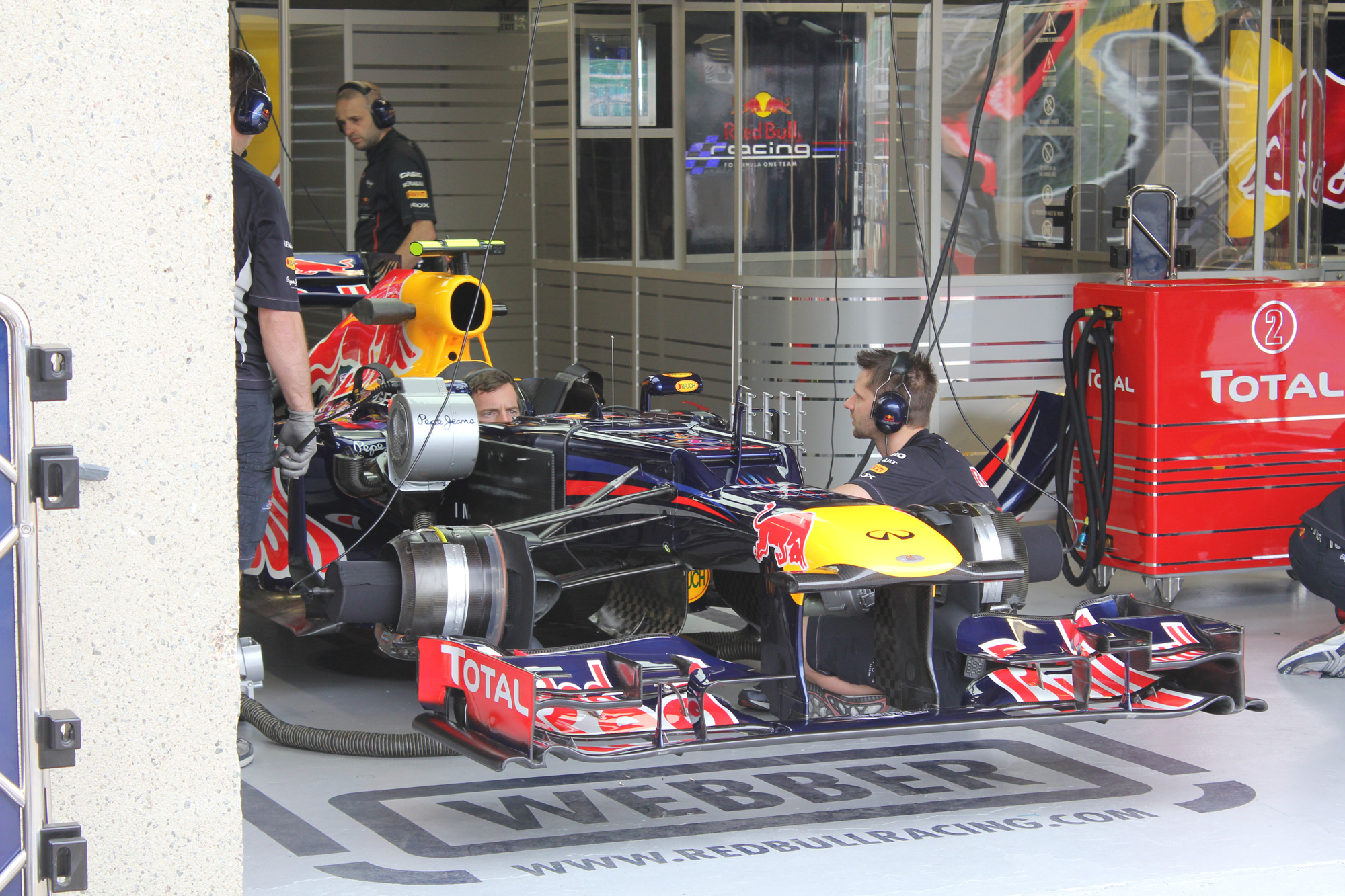 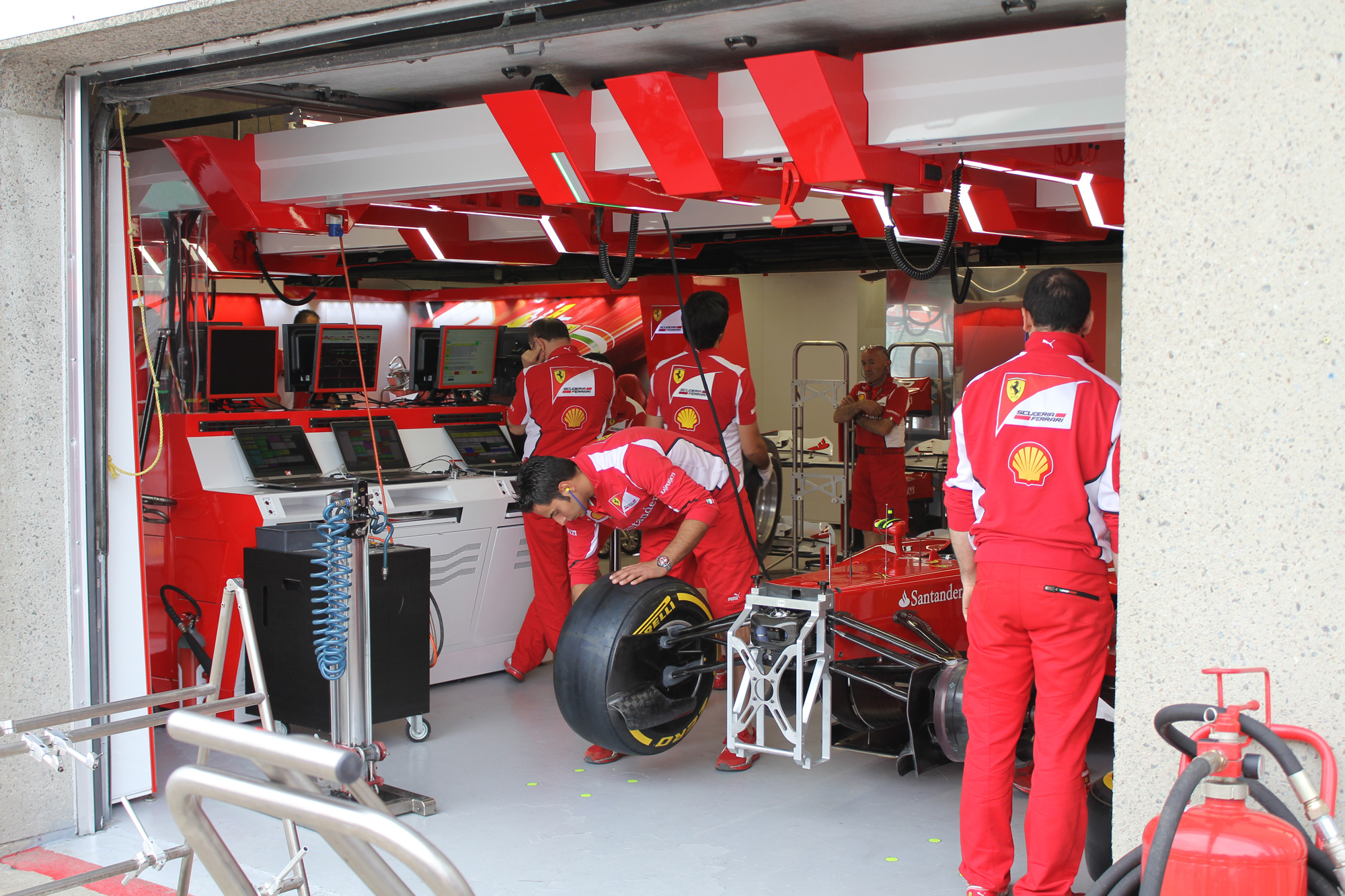 We got lead back out after that and saw many more people, most of the drivers in fact apart from Lewis and Jenson (TBH i kind of expected to meet them in the garage as part of the tour but never mind). I think the tour lasted an hour in total.

Our seats were directly on the start finish line opposite the pits, so we got great shots down in to the garages and saw all the action at the stops.

I can't be arsed to link every picture, so the album is here. Hopefully you can view it, let me know if not:

One of my favourite photos from the weekend. For some reason a lot of the drivers were giving me waves and a thumbs up. I like to think he's actually pointing at me in this pic: 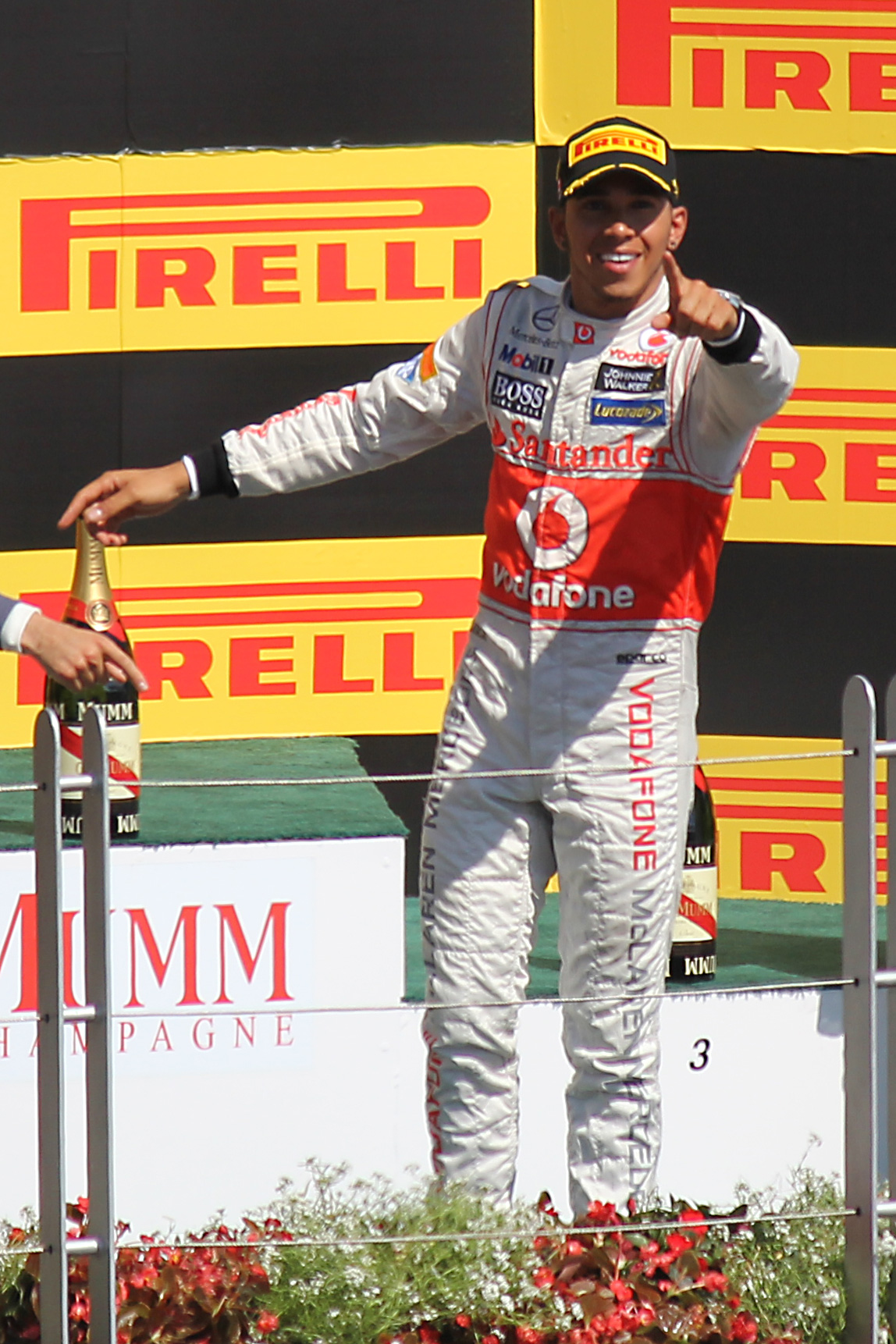 I can see why you would have nearly thrown up with excitement, I can only imagine how utterly amazing that would have been! The MP4-27 was a real stunner as well

The one time I’ve been to Silverstone me and a mate just got general attendance tickets/bring your own seats, worked out rather quite well though as we sat near Abbey for the race and just milled around the track for the rest of the weekend. We did get there at 7:30 ish on the Sunday morning though, just as it was lining up for 30c plus

worth it in the end though! Only pic I got with anyone F1 related was Martin Brundle when he does his track side stuff for the free practice sessions which was kind of neat if a pretty poor picture really

Very, very cool, thanks for sharing.

Maldonado and Michael Schumacher too.

amazing photos thanks for sharing them cool stuff

Glad you enjoyed them. I've got lots from the paddock bit, many team bosses and other drivers. It was such a great weekend in all, the track is in such a lovely place (it's an island). We were staying in the city, and you get a metro train to the track, then have to walk across a bridge to get in to the circuit, and part of that bridge crosses the track at the chicane around turn 5 or 6. You'll know it well from on-board footage as they brake just under it before flicking right left. It gives a real sense of place.

I can't reccomend that venue enough, so if anyone fancies an overseas race, it's a good one (we fancy going back one day). The whole city goes f1 mad too, with our hotel having a free f1 reception after qualifying and the race, giving free food and fizz for people there for the race weekend.

I've never gotten round to going to the British GP, let alone an overseas one.

Went past the entrance to the Nurburgring once though when i was doing a Rhine tour.

They must have thought it was an Abt punishment...…

British Moto GP cancelled , shame as i have weekend camping tickets for it. Hopefully be able to do it next year.

Looks like Williams may be selling it's F1 team as they've made a £13M loss, and they've split from their title sponsor.

Even thought they’ve been anonymous for about half of the last decade it’d be heartbreaking to lose such a historic team from the grid.

I know in the past they’ve been a little too proud, not buying what they can off Mercedes like Racing Point do, Haas off of Ferrari and instead doing it all in house. Maybe they might suck up their pride a little for the short term if they want to hang around for the longer term, crying shame the cost cap couldn’t have come sooner if we do lose them though

Just been reading some more on this...

Such a shame it has come to this, i remember watching the likes of Mansell, Prost, and Hill steamroller the opposition in their championship years with the team.

I started watching in late 97, and to me the sight of Williams and McLaren at the front IS F1. I can't imagine F1 without either.