I love the bad episodes! Me and my wife were pissing ourselves watching Riker crest a girlfriend in the holodeck the other day.

The only comic in the collection I've read is "Hive", a Borg focused comic which features,

The only comic in the collection I've read is "Hive", a Borg focused comic which features,

I'm kind of tempted by the Transformers ones but I probably won't read them.

If anyone goes for that bundle and doesn't want the Star Trek Online stuff, please can I have it?

Currently enjoying a really strong run of episodes as my TNG re-watch has reached the middle of season 3, probably the most consistent period for the show so far.

Whilst S3 has still had the odd episode that was a bit wonky the overall quality has been much higher and more consistent - probably only The Bonding and The Price have been really wobbly efforts.

The Vengeance Factor was a lot of fun, although it did feature some classic computer bullshit - "we've found a picture with the corner of someone's face visible, the computer can recreate the rest of their head entirely using magic!"

Also loved the final confrontation - Picard is mediating a discussion between the two parties and seemingly making progress when Riker beams in and starts shooting Yuta ... and Picard just sits there looking barely phased by events! "Oh I'm sure No. 1 has a good reason for what he's doing, no need to be alarmed"

Loved that they didn't end the episode after exposing Yuta though and that we get a really touching scene between Riker and Picard.

The Defector was excellent too, S3 has had two episodes now that actually make good use of the Romulans who had been relatively under-served by the series in the first couple of seasons. The Shakespeare allegory is well done as well, although pretty heavily telegraphed. I'm not convinced by whatever accent Patrick Stewart was supposed to be attempting in the opening either!

The Hunted (only just realised that they really make too much use of "The Something" as a naming scheme for episodes!

) was nice and explored some good themes around genetic exploitation of people by government. Mainly this episode was notable for having James Cromwell in it - "wait a minute, that's Cochrane!"

The High Ground - again a really enjoyable episode and notable for featuring a reference to the 2024 unification of Ireland which seems much closer to coming true these days! Dr Crusher gets a bit more focus this episode which is always nice (except when she's being seduced by ghosts obviously

) and the general story around oppression and whether armed rebellion is justified considering, as Data points out, that it has historically proven an effective catalyst for political change is quite well explored. On which point it was slightly hilarious that in one moment Picard is telling Data that diplomacy should be favoured over violence to enact change, and then seconds later when the terrorist leader beams on to the bridge he barely hesitates to leap across and lamp him across the face!

To be fair Picard looks like he has a mean right hook on him.

Deja Q is more Q, and more Q is always a good thing. Also we get to see the Picard face-palm so what more could you want?!

In A Matter of Perspective we get to see Riker finally brought to justice for his pervy ways an interesting exploration of alien legal proceedings. Although in the light of the recent Anne Sacoolas situation it feels like Picard would have just said "Nah, diplomatic immunity mate, see ya!" and warped the strawberry float out of there as soon as the murder allegations against Riker came up. Reading Troi's face and reactions to proceedings is fun - she's clearly thinking Riker is innocent but also you can just tell that in her head she's like "you have kind of made yourself an easy target Will!" Oh and Picard's interaction with Data and reaction to basically having an android call his painting gooseberry fool in the opening is enough to earn this episode at least 2 bonus points from me.

Finally the last episode I watched was Yesterday's Enterprise and this is almost certainly the best episode of the show until this point. A well constructed, tense affair that manages to redeem the kind of gooseberry fool ending that Tasha was originally given. Also kind of like that military timeline Picard clearly doesn't get on with Riker.

Looking forward to the remaining episodes of the season now!

What I love about Yesterday's Enterprise is that it's an episode that has long lasting consequences too.

Watch more Star Trek so we get more impressions

So after a brief pause to catch up on some other things my TNG rewatch has continued toward the end of season 3!

Next up was The Offspring, this was a decent enough episode which explored some interesting themes in the idea of Data having a child ... and oddly relevant given the focus of the current Picard series! Unfortunately coming off the back of Yesterday's Enterprise this couldn't help but feel a little bit limp in comparison. Admiral Haftel just comes across as a bit of a dick for most of the episode and it feels like the drama is a bit staged as I would imagine it would be easy enough for them to come up with a convincing argument to stop Starfleet from effectively stealing Lal for research. Highlight: Riker proves that even newly "born" android women are unable to resist his charms!

Following this was Sins of The Father which was another really good episode! We've not delved into Klingon matters all that much in TNG so far, nor really explored Worf's backstory all that much so this was a nice exploration of those areas. Kurn's reason for rocking up and being a dick to everyone so he could do his "LOL I'm your brother!" reveal was a bit stupid but I guess they had to get the ball rolling somehow. All of the stuff with the Klingon council was excellent, Picard got another opportunity to show everyone his fisticuff skills.

Powerful ending with Worf basically taking the hit to his honour (and that of his father) in order to preserve the Klingon-Federation pact.

Unfortunately for the Picard clone Riker sees through things by detecting a shift in the balance of the crew - sensing himself to no longer be the dominant representation of masculinity on board he soon realises that only cosmic trickery can have achieved this and that this Picard must be a fake! Meanwhile the real Picard is busy doing what he does best - mulling things over briefly before using his inherent powers of command and his authoritative voice to will the universe to deliver his desired outcome using whatever resources he has around him. All ends well as the fake Picard is ousted and the real one gets to feel super awks about what happened in his absence - cue subtle sexy eyes from Dr Crusher on the bridge

Looking forward to the next episodes now - having looked at the titles of them there are one or two that I don't recall actually watching before which could be fun to discover!

Worf is legit one of, if not the best character in all of TNG/DS9/VOY.

Easily the character that gets the most development over the 11 seasons he appears in. 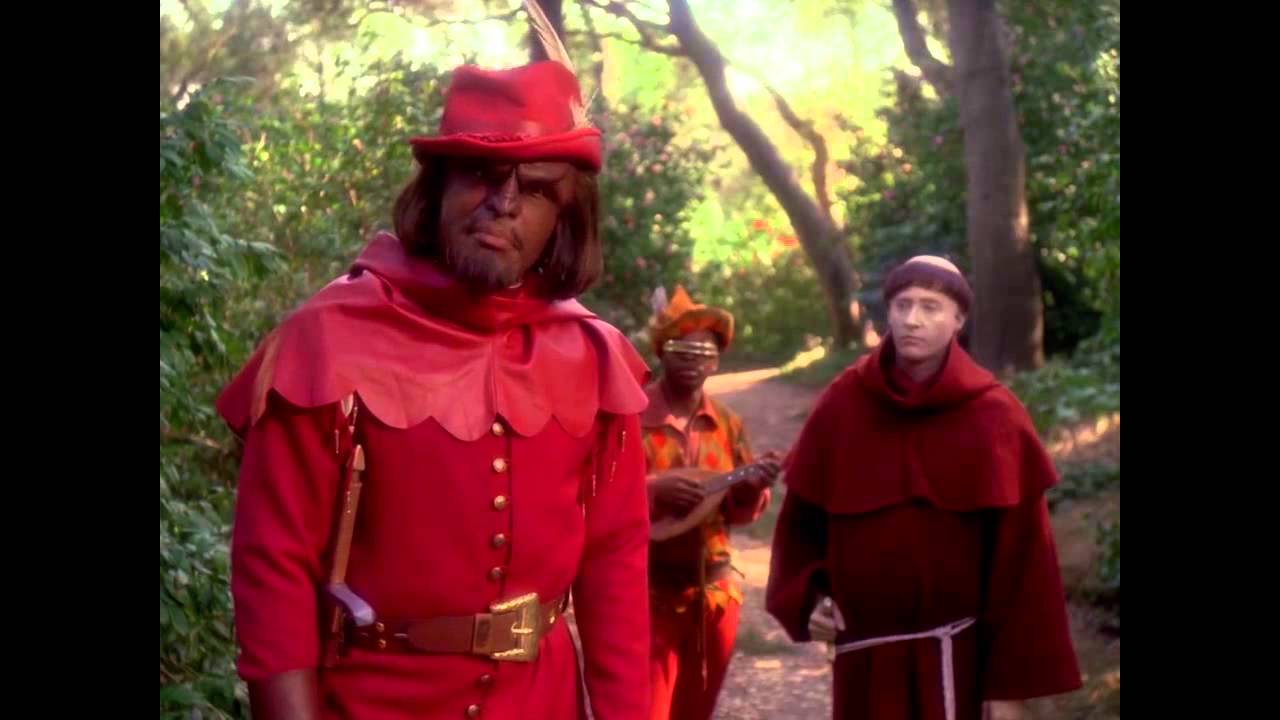 Cheeky Devlin wrote:Worf is legit one of, if not the best character in all of TNG/DS9/VOY.

Easily the character that gets the most development over the 11 seasons he appears in.

I so wish they had made that series about Worf going back to the Klingon empire after DS9.

He is not a Merry Man.

Glad to see more Jenuall impressions. And the funny thing is, I watched two of those episodes last week!

Love Worf in the DS9 baseball episode in S7.

DEATH TO THE OPPOSITION! FIND HIM AND KILL HIM!