KK wrote:I wonder what this now means for the international market. Is it viable to keep the WWE Network app and infrastructure running or is another deal with Amazon or Netflix on the horizon?

In terms of Live programming, such as PPVs, are adverts now going to be a thing?

It's very interesting isn't it. I assume internationally it will stay the same for now.

I don't quite get how the product will appear on peacock, whether it will simply be another section of the app and still appear very similar to the current WWE network or if the shows will just appear individually. Caught up with the past two weeks of AEW earlier. I can’t be the only one noticing that Chris Jericho has gone to the dogs. I got the strong impression he hit the moonsault on this week’s episode just to prove he could still do it after the complete disaster the week prior. Looked like he came really close to seriously hurting himself. It’s like he’s become a parody of himself; the very thing he used to moan about in regards to WCW’s main eventers in the late 90s, or what Undertaker said he didn’t want to become more recently. I’m not saying Jericho needs to retire or anything, but he does need to take one of his extended breaks.

I just watched last year's royal rumble, I really enjoyed the first half of it but wasn't keen on the second, I thought it was kind of original for a rumble match.


https://www.youtube.com/user/kerr9000 for my YouTube channel. where you can find my Horror House and GamesRoom Reviews[b]I can also be found as kerr9000 on the Xbox, and My Instagram is kerr9000gamesroom and its mostly photos of old games and horror movies.

Just reminded me that WWE has uploaded that match in its entirety to their YT:

At the beginning of the very 1st Lockdown I got the WWE Network and blitzed through 10 years of PPV, burned myself out and now with the buzz of the Rumble I’m determined to get up to date over the next month or so, just up to 2011

Looking forward to watching the NXT and Women’s PPV’s when I get there.

Pyro in the ring to kick off a show - haven’t seen them do that in years.

Starting with Goldberg. This should be...interesting. I was expecting them to open with the women’s Rumble.

Hope that passable load of nothing (hey, it was at least better than that Kevin Owens squash and Undertaker disaster in the desert), coupled with going on first, doesn’t lead to Goldberg winning the Rumble later or something...

Enjoyed the Royal Rumble, decent matches from top to bottom. How on earth Carmella didn’t break her neck! Nasty dive. There weren’t many surprise entrants, could have done with some more [Christian looked superb aside from that.]

I enjoyed the event overall, both Rumbles were decent with the women's being very good.

Was cool seeing Kenta show up at the end of Dynamite this week, made me very happy

Also like what they're doing with the women's tournament with the US side and the Japanese side. Very much looking forward to that.

I saw that the UK deal they mentioned at Wrestle Kingdom has turned out to be a new 1hr show on the Roku Channel. Every Thursday at 5pm starting from next week. Apparently there may be a small amount of library content added too. 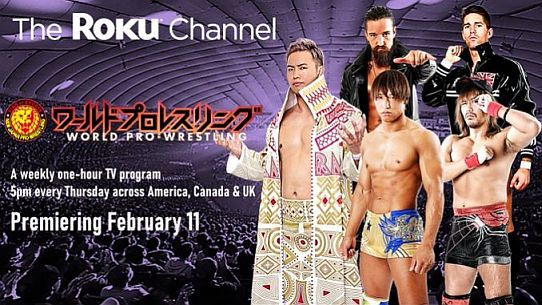 Main event of this week's AEW was really fun. Archer came out of it looking like a beast. If there had been a proper crowd in attendance then I think they would have gone crazy for this. Kenta and Moxley was done well too, heating up their feud nicely. Kenta's double foot stomp from the ramp was lovely. Definitely worth a watch.

I personally don’t really care if they support Trump or not, but if you’re going along to something like those riots/protests it means you’ve fully bought into the nonsense that the elections were rigged/stolen and that Biden is somehow illegitimate.

I don’t know what’s happened to Jericho the past year, he seems to be losing the plot. From a TV performance perspective he’s been terrible. Not sure what his friends like Lance Storm think in private.

I watched NXT TakeOver on Sunday and I don’t know much about this LA Knight bloke but on the basis of his one promo I saw he could be brilliant. Loads of charisma. Kinda reminded me of The Rock in 97.

I did see that. Between him having a concert at that super spreader event and reading that he donated to Trump’s election campaign I am over him as a person.

It’s sad he’s tarnishing his legacy. A few weeks ago NBA fans happened to tune in to AEW Dynamite following the game and he ended up trending on Twitter because they couldn’t believe how bad he looked in the ring. A damning indictment of both him and what lapsed wrestling fans think of the current product.

All the outspoken things he said about WCW (such as Jay Leno hooking it up with Hulk Hogan at Road Wild making the business look like gooseberry fool) he’s now partaking in himself.

Aside from the wedding (like a crap WWE tribute act) I’m glad AEW has noticeably rolled back the comedy stuff the last month though.

He used to (or at least it seemed) have a degree of self awareness about his career, knew when his character was going stagnant and what have you. That seems to have gone out the window in favour of his ego.

You can’t drink and party like a rockstar at 50 and then expect to wrestle a 60 minute classic. At least when Triple H had his last title run in 2016 he was an absolute gym junkie.

KK wrote:I watched NXT TakeOver on Sunday and I don’t know much about this LA Knight bloke but on the basis of his one promo I saw he could be brilliant. Loads of charisma. Kinda reminded me of The Rock in 97.

I dont get why They bring in former impact stars just to out them ln Nxt i mean I'm sure most could go straight to main roster woth no problems.