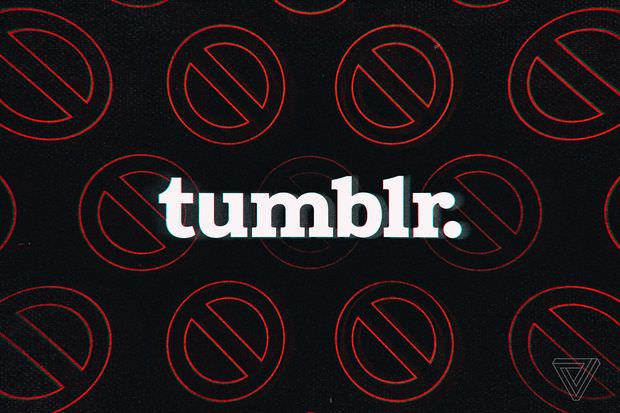 Tumblr will permanently ban adult content from its platform on December 17th in a move that will eradicate porn-related communities on the platform and fundamentally alter how the service is used. The ban includes explicit sexual content and nudity with a few exceptions, the company tells The Verge. The new policy’s announcement comes just days after Tumblr was removed from Apple’s iOS App Store over a child pornography incident, but it extends far beyond that matter alone. “Adult content will no longer be allowed here,” the company flatly states in a blog post set to be published on Monday.

Banned content includes photos, videos, and GIFs of human genitalia, female-presenting nipples, and any media involving sex acts, including illustrations. The exceptions include nude classical statues and political protests that feature nudity. The new guidelines exclude text, so erotica remains permitted. Illustrations and art that feature nudity are still okay — so long as sex acts aren’t depicted — and so are breastfeeding and after-birth photos.

Users have a chance to appeal Tumblr’s decision in situations where they think there’s been a mistake, and the platform admits there’s a chance that the automated tools it’s using could make errors. It’s a process that could take a while, as a bulk of Tumblr posts feature explicit content. Users who run adult blogs can also export their content before the change takes place in order to save what they have.

Explicit blogs will be allowed to remain on the service, but they’ll be heavily censored for all visitors. Here’s Tumblr’s FAQ:

What if my blog (not to be confused with posts) was marked as “explicit” before December 17, 2018?

Blogs that have been either self-flagged or flagged by us as “explicit” per our old policy and before December 17, 2018 will still be overlaid with a content filter when viewing these blogs directly. While some of the content on these blogs may now be in violation of our policies and will be actioned accordingly, the blog owners may choose to post content that is within our policies in the future, so we’d like to provide that option. Users under 18 will still not be allowed to click through to see the content of these blogs. The avatars and headers for these blogs will also be reverted to the default settings. Additionally, posts from these blogs are kept out of search results.

"“We’ve given serious thought to who we want to be to our community.”"

Since Tumblr was founded in 2007, it has largely turned a blind eye to adult content. The company has tried to shield it from public view through Safe Mode and more stringent search filters. But in recent months — and under the ownership of Verizon’s Oath unit — it began to consider removing content more aggressively. “We’ve given serious thought to who we want to be to our community moving forward,” CEO Jeff D’Onofrio says in a blog post. “We’ve realized that in order to continue to fulfill our promise and place in culture, especially as it evolves, we must change.” D’Onofrio says Tumblr weighed the pros and cons thoroughly before making its decision. It also decided not to remove explicit accounts because it wanted to give these accounts a chance to post appropriate content instead.

They'll be bankrupt within a week, I reckon.

Where are peeps gonna get their gamer girl goth / emo / "alt" model GIFs?

(Disclaimer: I am neither a proponent or user of these content delivery services.)

Just go to virtually any Russian social media website instead, they don't give a gooseberry fool at all.

Honestly I kinda feel bad for neo-prostitute cyberpunks everywhere. If you're going to deliver explicit content, it is kind of humanising to be able to do it as part of a community, with a certain cult aesthetic, and an actual bio and blog and stuff.

Same with insta or twitter where allowed, the reason people go to these places isn't really for content but the meta around it.

Tumblr: another website I find a bastard to navigate.

It was a relic of Web 2.0 when people took back the Internet. Navigation was not a concern, it was how many animated glitter gifs you could pack into a single DOM while still being able to load the page.

KK wrote:Tumblr: another website I find a bastard to navigate.

I imagine it is much harder to do one handed...

Navigating it is almost like exploration. The search function is useless so you just use google or something to find one blog you like, find an image you like, click on it and then see who liked or reposted it, follow the link to the reposters blog and then repeat until you are staring at some seriously weird gooseberry fool.

Jenu-All I Want For Christmas wrote:

KK wrote:Tumblr: another website I find a bastard to navigate.

I imagine it is much harder to do one handed...

A lot of fan artists post all of their stuff to Tumblr, including their NSFW stuff, so this is going to have a big impact on fandom communities. Probably Tumblr will lose that audience once people settle on a new platform. Nobody, but since you're already there...

The servers would pay for themselves with all dat ad revenue we'd rake in.

The servers would pay for themselves with all dat ad revenue we'd rake in.