Use of forum software different to PhpBB

Tell us what to do, or volunteer to do it.
Forum rules

Do we need to look into some rewrite rules so we don't break a load of links in a transition?

OrangeRKN wrote:Do we need to look into some rewrite rules so we don't break a load of links in a transition?

Internal rules, yes, should the domain root change, but the Discourse migration tool has this built in.

Great, the talk of an "archive" made me think we might if all of the phpbb forum content is moved for example.

If there is an automatic URL redirect tool within Discourse's migration that would save me a whole mindfuck of time, as I suck at regex and I don't want to redirect literally thousands of links if it can be automated. The URL structure is already pretty similar just with a number "subfolder" on the end (not actually a subfolder but a rewrite of course) instead of an old PHP GET variable (?f=1234). The legacy use of those redundant characters has always annoyed me. A URL should look like this and not whatever programming language/software wants it to look like:

https://place.com/destination/pointofinterest - at most. strawberry float those random characters and equation looking stuff. It's not semantic.

Discourse does look very slight in its basic guise (I realise that's intentional), so obviously there would be a lot of work there to make it more cosy and GR-like. Of course I'm not oblivious to how much pushback there would be changing anything whatsoever, so might need to align it more with the existing navigation and look & feel.

About potential downtime, the last server move along with Karl putting us on MariaDB while fixing stuff took a lot longer than expected, I think it was about 4-5 days, so if there is a wait while GR is down, that wouldn't be the first time. It's taken me similar lengths of time just to dump and move our database, but that was before we had shell access with actual CPU/memory and could just do it with mysqld. It took a few hours then, maybe.

Inevitably the bigger the database gets the longer these procedures take, assuming we keep everything, that is. We should keep a database of URLs, but not necessarily every topic would be readable. I mean, there are some good threads, but there's thousands of threads of random gooseberry fool to go with it. Maybe some legacy things that went viral.

I was reading the other day about how the STALKER devs allegedly used the chernobyl photo thread as reference, but that was probably made up by some guy on Reddit.

How do we know you wont wander off into this new Discourse version of GRcade, never to return?

Do you need a ball of string?

Last night I had a really stressful dream about our software finally collapsing and dying. The forum was totally down and I felt awful.

Seems relevant to this thread. Migrate to Discourse to help Karl sleep at night?

Did you see my mention in the donations thread? I had a dream you went bezerk and started hoovering up all the other gaming forums on the Internet, adding giant logos to the bottom of the page that got bigger and bigger

I have dreams of big incongruous layout and feature changes happening overnight that I wasn't expecting and things that like that fairly regularly. I'm pretty sure at least once it was the site getting hacked and just slowly devolving into some strange mish-mash of things, like the site was melting from within. It's very distressing.

Just 20% to go. Just a warning though, a LOT of errors about missing parent posts are being flagged during this process. I think this may be where forumites have exercised their right to have their post histories removed from the database. How the Discourse importer works around that, I do not know.

Looks like it generates an error for every reply to a removed topic, so probably looks worse than it is. Hopefully it just skips those DB entries rather than just importing a load of weird orphaned posts.

Yeah. Part of the reason I'm not super keen on those requests, even if they are legitimate, is because it strawberry floats up our database and indices. But oh well.

We're into the last ten percent now. We might even have it up by late this evening.

I forgot about PMs, we have a lot of them!

The initial import is complete, I've now set it to run an import on a copy of the database from today to get what was posted in the meantime. Then we'll start up the Discourse instance and it will run some sort of frist setup on the database. This can take a while apparently so we'll see how that goes.

Ok, so I've got it live, but I'm hesitant to share the link yet to the wider public until the staff are happy, but here's a sneak peek at the landing page. We've chosen Category view as default, with the latest topics on the right as well to show activity. 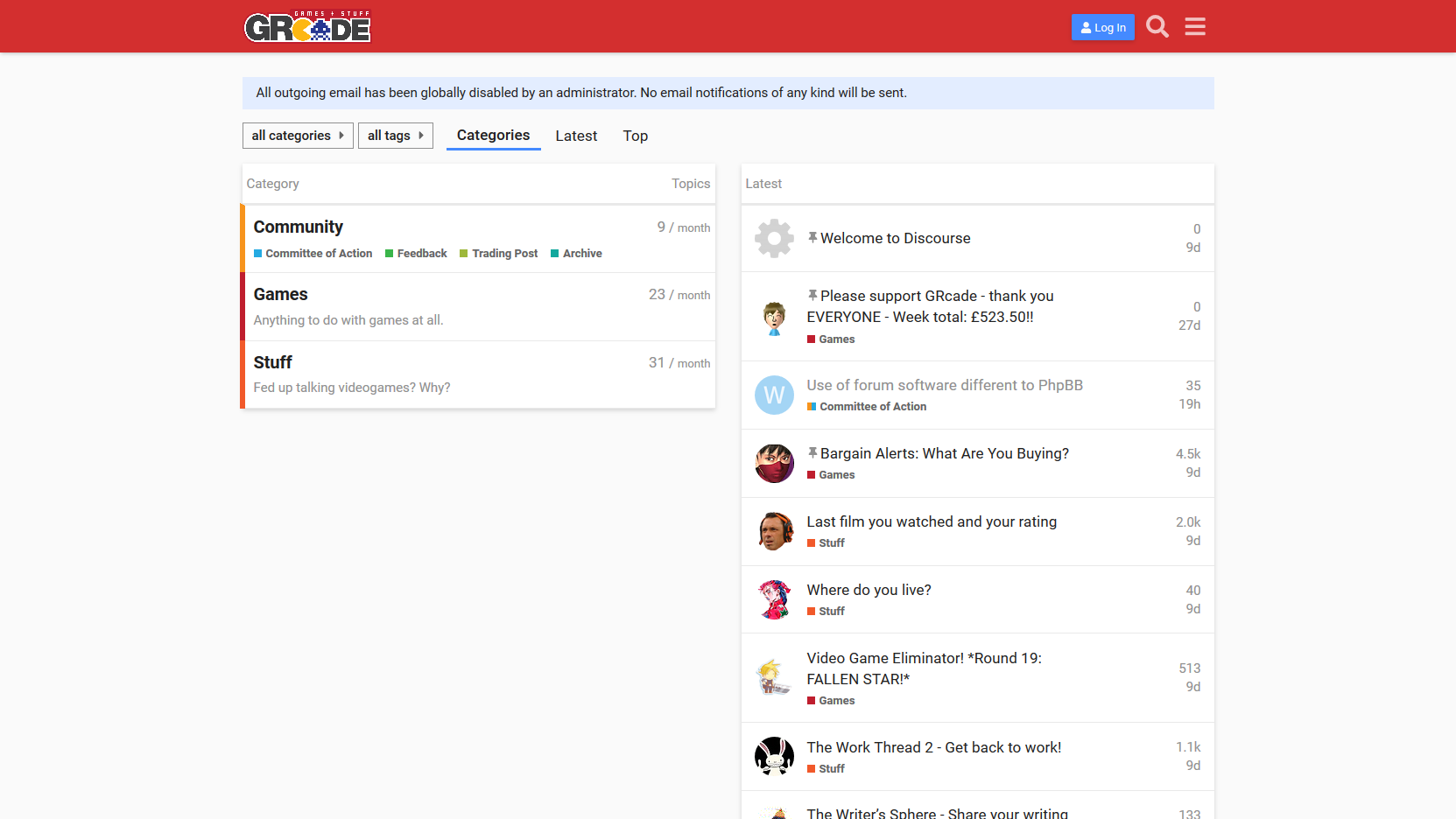 Thanks for your hard work so far.

My list of work will grow for sure but for "this is discourse" that's fine.

It's a more efficient use of screen real-estate for that front page layout, but I think I could do better. We'll see.

Also please can someone sort out my account, I can't view some topics.

The people's committee needs your feedback!

You can sign in with your own name, but for security reasons you'll need to request a password reset on the new site to get logged in.

Not sure why tweets aren't auto embedding. I'm fairly sure it should work by default.

Return to “Committee of Action”

Users browsing this forum: No registered users and 12 guests