Majora's Mask Part I - The Link in the Iron Mask

Anything to do with games at all.
Post Reply
90 posts

Wrathy wrote:
Theoretically I could have every single screen going at the same time -

Wrathy in a few months: 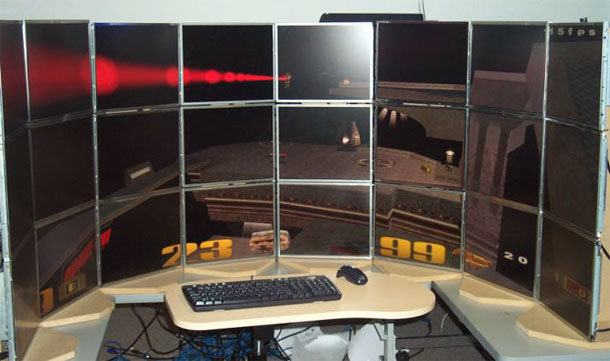 Carlos wrote:Maybe one of you guys can help me with mine:

One of my neighbours have me a perfectly good 42" Panasonic LCD a few months ago and I have my Switch and Xbox One S hooked up to it.

For reasons I cannot fathom the UI for the Xbox sits outside the border of the TV. I have tried adjusting things in the menu of the TV (Aspect ratio etc) and it doesn't help. I've adjusted the settings of the Xbox and this doesn't help either.

Some games have the box you can move so it hasn't affected my gameplay too much. Valhalla plays ok for example but Destiny 2 sits outside the TV by a few mm.

What am I doing wrong?

On my old Samsung tv, there was an option called 'just scan' in the picture settings along side 16:9, 4:3, zoom, etc.

The picture is being overscanned, so just scan (or the equivalent) will map the pixels 1:1.

It worked! Thanks VM x

I'd describe mine as a modest set-up. Clear and concise. 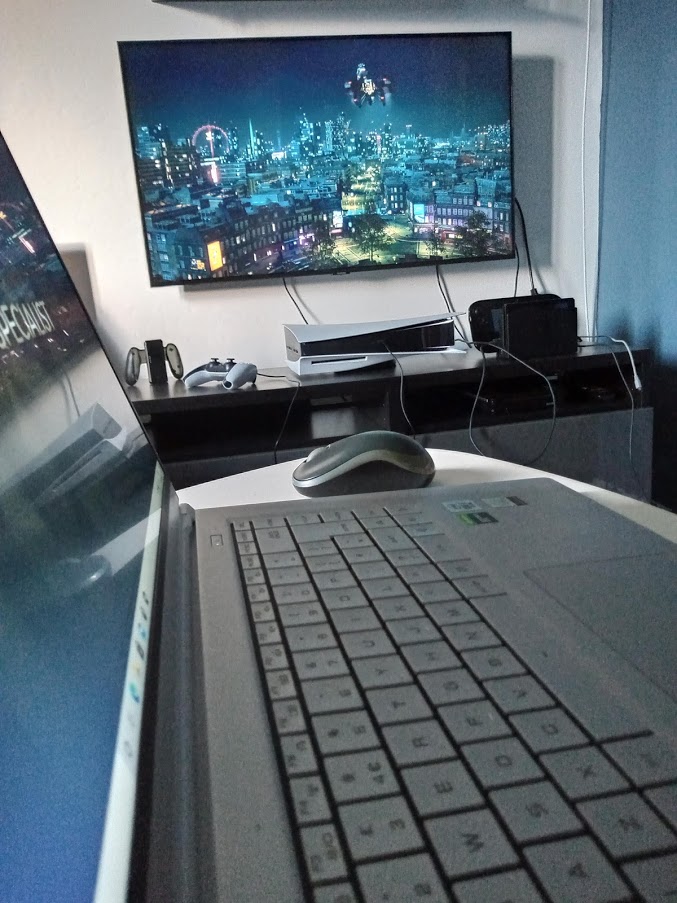 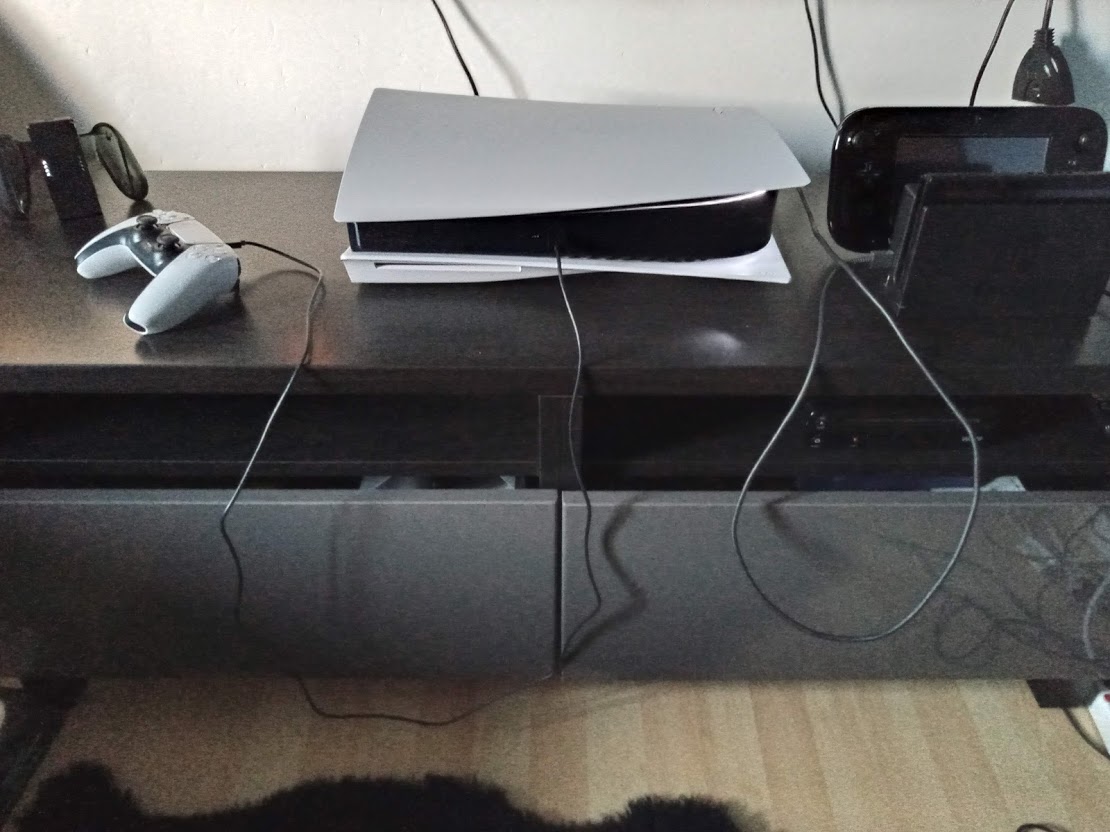 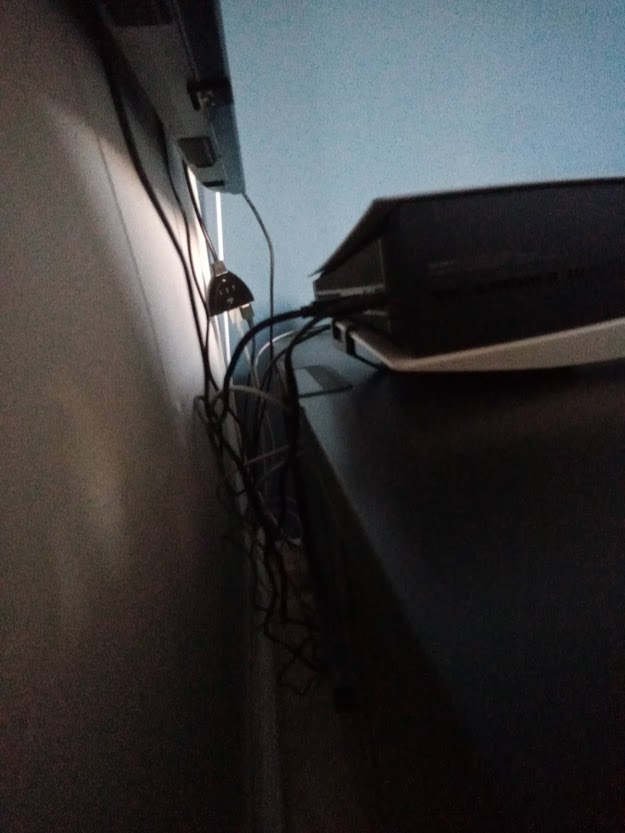 47" (4K HDR) Samsung display.
On the unit: PS5, Switch, Wii U.
The draws beneath contain a few spare joy-cons, various manuals (for the tv and consoles) and blank cases I use to store the discs of games I'm currently playing.
Behind the screen: Cables and HDMI splitter.

Yubel wrote:I'd describe mine as a modest set-up. Clear and concise.

I like it, Yube! Great to see the U and Switch ready to rumble, and the PS5 sure does look pretty funky!

IIRC, I think you owned a PS4 before getting the 5?

Yubel wrote:I'd describe mine as a modest set-up. Clear and concise.

I like it, Yube! Great to see the U and Switch ready to rumble, and the PS5 sure does look pretty funky!

IIRC, I think you owned a PS4 before getting the 5?

Yeah. I still need to do the whole 'primary system deactivation' for the PS4 before selling it, however. 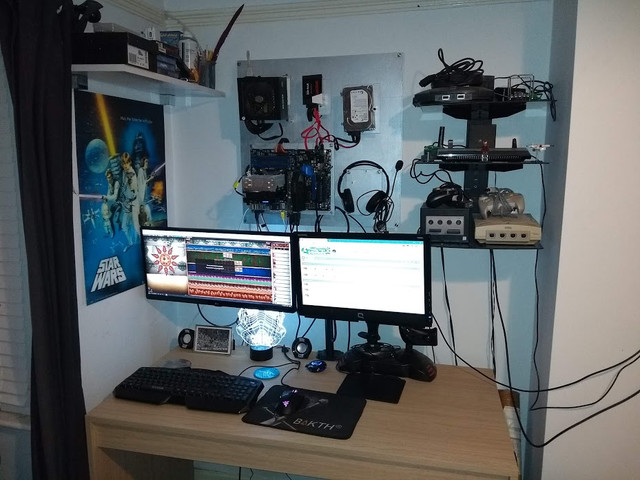 Been holding off posting this as I only got the monitor mount on Monday and I needed to cannibalise an old TV mount to fix it to the desk and create a makeshift VESA mount for the old right hand monitor. Only finished this afternoon! That's why the cables are a mess, your honour

Systems:
- Wall mounted PC: I posted about this at the start of December in the PC thread - hasn't fallen down yet!

- Mega Drive (mounted to the underside of the desk so not visible)
- Gamecube
- Dreamcast
- Atari 2600 Jr
- Atari Jaguar: considering getting rid of this as I bought it cheap on a whim and only have Wolfenstein. I'd rather have my ZX Spectrum up there

All the consoles are connected to a TV that's just to the left of shot.

Yeah some tidying/hiding of wires would work wonders on that setup Dowbo!

What are the wires which lead off to the right heading into? A separate TV for the old consoles/

What are the wires which lead off to the right heading into? A separate TV for the old consoles/

Yeah, just an old 32 inch Toshiba. The shelf unit actually has cable management built in but it's never high enough on my to do list!

That's amazing; I've not seen a system setup like that before! It must have taken you a long time to create it, Dowbocop. Nice work!

That's amazing; I've not seen a system setup like that before! It must have taken you a long time to create it, Dowbocop. Nice work!

I'd say between 30 and 40 hours if you include planning and four coats of paint drying. Most of the wall-mounted builds I saw used brand new parts so they unboxed, measured, re-boxed, then cut and finished at leisure. My computer was in use right up until the lunchtime of the day I mounted the components. There was a plan for my build, but it had to change several times as different issues and challenges came up (as shown by my rather fetching headphone mount which was supposed to have a GPU on it!). Even though it's a bit messier than I wanted it's so much cleaner than my old case, and because I only have the CPU and GPU fans it's whisper quiet compared to the case.

I would totally do it again next time I built a PC (not least because there's furniture where my case was!), and I think I've learnt a lot of lessons to take to a new build, which, coupled with being able to plan properly (the movement of the case was a necessity) would lead to a much more streamlined end product.