A bit of nuln oil will have the silver perfect, have faith

A bit of nuln oil will have the silver perfect, have faith

Thanks mate. That's just 2 layers of Bugmans Glow at the moment. Gonna give it a wash and then touch up with the same again, and there's a lighter flesh tone in the Reaper kit as well if needed, but I'll wait and see for that.

Anyone do panel lines like gunpla on marines? A wash or paint up from black. I've noticed GW don't actually do that lately. In fact, I'm not sure they ever did. A wash will probably suffice.

Those are a great start Knoy, for the silver, I'd agree, a a black wash over should help, generally I still go for the "boltgun metal" sort of tone, no idea what that's called now, same sort of thing as my cultist on previous page. Highlights aren't great on mine (and those old lead minis lacked a lot of detail compared to today's) but I'd maybe use your silver as a highlight in the future.

I generally work a mixture of dark brown (bronze, copper etc) and near-black washes into metallics these days, it adds a slight sheen and prevents them looking flat. Due to the nature of how metallics reflect light back they tend to look more flat than you would expect without shades so I par them back with washes and wipe off excess with my thumb or whatever so it leaves the raised edges as the shiny bits.

I also nearly always find metals work less well with high coverage, so I drybrush those parts to begin with and then highlight details. It can perhaps look less realistic overall (as IRL silver things are 100% the same colour, you have to scale this down like 1000x to consider how silver looks with almost no light on it at all, even though there is light on it in real space) but it just looks better to my tastes (referring to my own work here in the past). It's the same thing with my tryanid carapace I overworked in red. More of that should be red gore and stripes/streaks, at least 30% black, there's a lot more of that visible on my other nids. In other words, basecoat should always be visible somewhere or you're slowly eliminating "dynamic range" so to speak with each successive layer.

figuring out wet blends on the fly

Sadly I have no idea what that colour is. I pretty much wetblend on the pallet and then apply to the mini on the fly.

Occasionally you can work only-just-dried paint layers on the mini to a paste again and blend that way, there's a little wiggle room. By that point, you're pretty much painting with spit, so as the saying goes, eat your paint water. Just go for it.

I pretty much treat my paint layers like a watercolour block. If you work them and they are thin to begin with, you can pretty much "erase" paint if you want. oc you have to water down a lot.

So if you want to go backwards and forwards a bit with wet blending, just water it down more. It can be harder because the paint can split and create craters (so like imagine a bubble with only the border of the bubble left) but at least that means nothing you do is as permanent and you pretty much never risk gooping up your mini.

Worst case scenario you can strip it back with a little meth on a cotton bud or literally sand it with 400 grit and try again. It's always possible to go back.

Remember a painting is never finished. You just need to know how to redo gooseberry fool without catastrophic evidence. All the paint does is dry. You can add more washes etc until you go insane.

That's really good btw. And I like the metals/studs stuff just like I was saying the other day, it only needs to really be about 20-30% metallic colour coverage in some cases (like really gnarly looking gooseberry fool, not flat stuff) or it doesn't really look metallic at all.

I havent done my metallics yet, its just base painted, Ive focused entirely on skin so far

today was the first time I felt like those painters I see in the videos, I was glazing the paint so thin you could barely see it, just dipping in and out, mixing on the palette, constantly back and forth just adding and moving around and adding - was nerve wracking at first but you just get into the zone and it happens so fast

False wrote:I havent done my metallics yet, its just base painted, Ive focused entirely on skin so far

today was the first time I felt like those painters I see in the videos, I was glazing the paint so thin you could barely see it, just dipping in and out, mixing on the palette, constantly back and forth just adding and moving around and adding - was nerve wracking at first but you just get into the zone and it happens so fast

Painting is like 90% anxiety and decision making, I think a really key thing to remember is that painting is an ephemeral thing while you are doing it.

If you've ever worked with oils, and this might just be fun as an experiment, that gooseberry fool literally doesn't dry for AT LEAST two weeks. You can take a dried painting and make it wet again with linseed oil and thinners, completely change it, paint over the whole thing, strawberry float it basically. It's sex with paint.

Doing that with tiny amounts of paint is like, pretty cool. Keep it up. It's a good one to work on as well, fleshy monsters are always better when they look, well, fleshy.

Looks like you've at least drybrushed the spikes, if anything a demo of how effective that technique actually is. I couldn't tell you how many times I've applied a tiny amount of a paint to something and thought, "hang on, stop there". Then I got anxiety and painted over it again and that initial sketch was gone forever. Time and time again I've erased good mark making like that. It's like drawing over lines that are already there on paper. Don't do it. Often less is more. As someone working with real bolts and mechanical stuff sometimes, or cleaning up old tools, that stuff is 90% black gunk and oil anyway. I don't think orks give a gooseberry fool if their metal is dirty. If I was painting an elf, sure, I'd make that stuff look polished but they're anal. I don't like elves, stuck up knobs. Dark elves are where it's at, you can tell they're into the kinky stuff.

the drybrushing was my attempt at zenithal without a spray (I live in a flat with no garden and dont want to spray inside really..)

I learned a few lessons from it, I may actually make another attempt soon where I start with a light grey basecoat and then work up dark grey and black from the lower parts, rather than starting with black and working down with grey

Slapped some wash on the lads, and boy is that stuff transformative. Really brings out the shadow detail, and very generously hides all my heretical brush work. 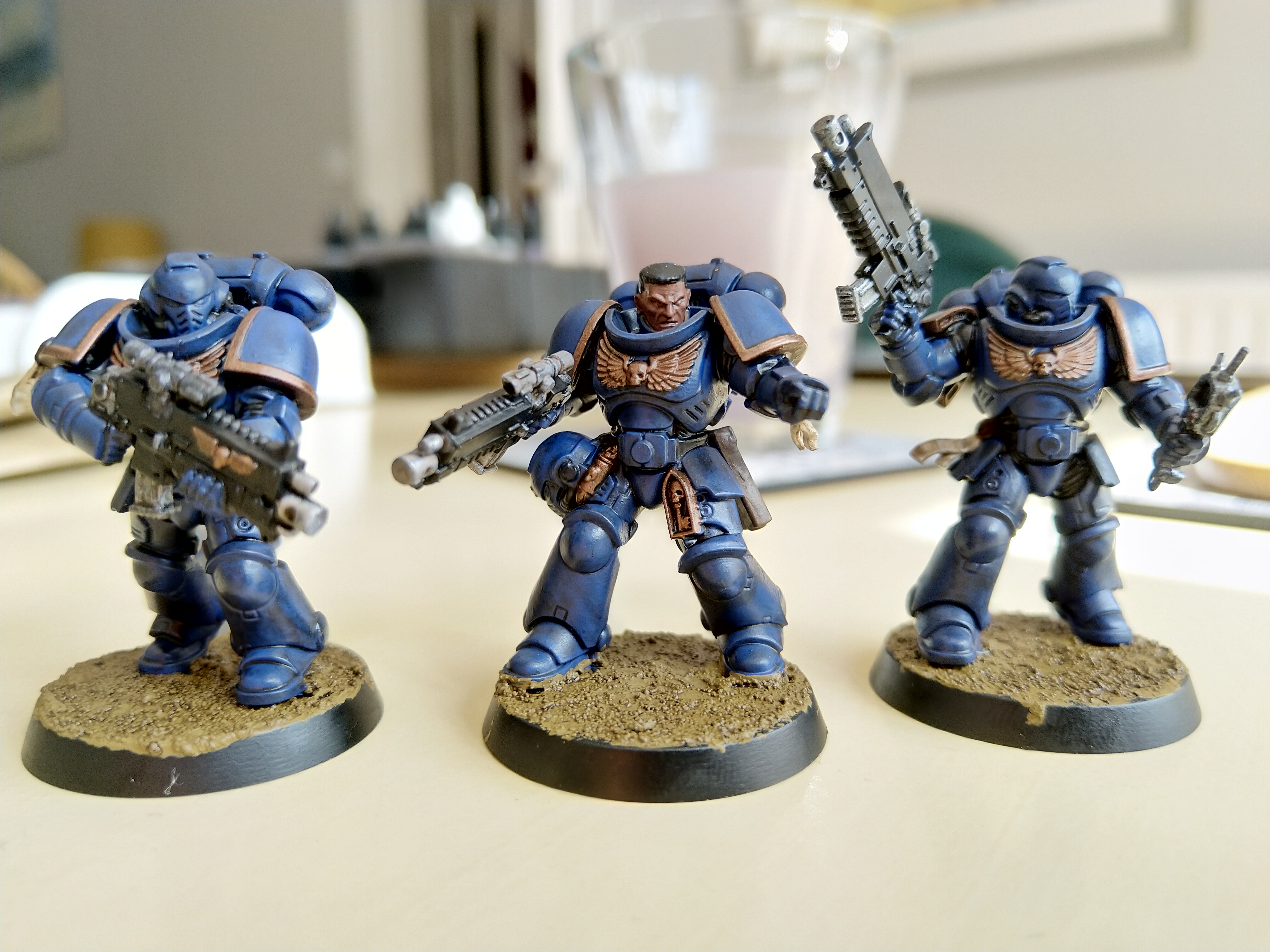 Now its on to the highlights. Started with the purity seals, and I'm pretty happy with how they've turned out. Slapped some other red details on, like the eyes, but they definitely still need tidying up. 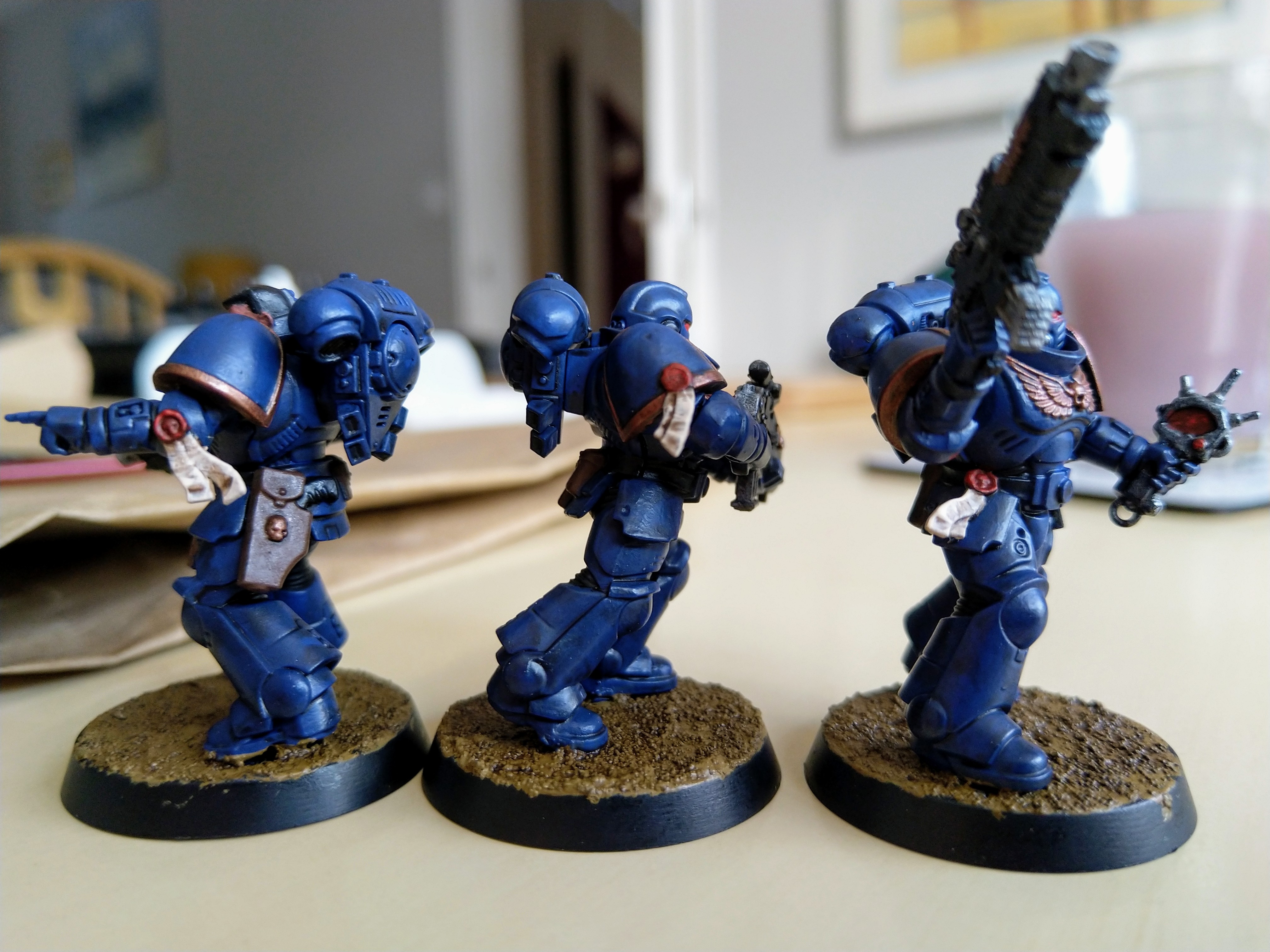 I really ought to take these photos under more consistent lighting, as well.

Thanks bro, means a lot, seriously.

For once, I'm actually really pleased with what I've managed to produce here, which is quite unlike me. Maybe it's because I've given myself the opportunity to really take my time, go slowly, and know that I can always fix any mistakes. It's genuinely been a really relaxing and satisfying way to spend my free time lately, really fulfilling.

The one bit I'm genuinely unhappy with is that Armageddon Dust texture paint on the bases. It was just impossible not to get it on the feet of the models, and as soon as any got on there, that was it, it was not coming off again, and because its textured, it can't be totally covered up by painting over.

Hoping to get these three finished this weekend, then I'll move on to the bones miniatures that came with my Reaper kit, which will be a different experience, all being different minis, so not being able to cycle between them painting similar sections at the same time.

There's a reason nuln oil/agrax earthshade are known as "liquid talent", but good job, you're starting out strong.

a bit of dust isnt a bad thing, it grounds the models in the world they are inhabiting

if you want to be a tricky dick then drop a touch of shade on the bits of dirt on their feet, focusing on the bottom - then tap the tops of the dirt on the feet with a very light touch of highlight

Knoyleo wrote:Slapped some wash on the lads, and boy is that stuff transformative.

It really is isn't it

I used to love when I'd paint models back in the day. You'd paint them up to a certain stage and they'd look shocking and you'd feel all dejected and sad.

But boy, once you apply a dark brown, or black wash you're on top of the world! You're a pro!

Used to love it, it was like watching magic!

Slapped some wash on the lads, and boy is that stuff transformative. Really brings out the shadow detail, and very generously hides all my heretical brush work.

Now its on to the highlights. Started with the purity seals, and I'm pretty happy with how they've turned out. Slapped some other red details on, like the eyes, but they definitely still need tidying up.

I really ought to take these photos under more consistent lighting, as well.

Some incredible talent in here.

Would anyone be up for a "Just for fun" painting competition?

there will be a bit of a gulf between 'hours painted' between all of us, but I definitely think everyone can have something they can be proud to share

Sounds good to me.

Agreed that a "best" mini may not be the best way to judge, given there's a big range of skill and experience levels involved, as well as the time availability, but it sounds like a fun idea.

New trailer about the Silent King! Necrons are my favourite 40K faction, pretty excited about this!