damn you got some talent Falsey. have you painted before?

thanks guys, and no not really painted anything before

Hah, goes to show what an adult giving a gooseberry fool does. I was the same but I started when I was 8 I think. God they were bad.

Really nice work with the metallics especially given you've just gotten back into the hobby and I don't mean to couch that. Orks are a good choice if you like dry brushing and blending metals. Skin and wood etc are harder to pick out details with because they are less round and regular in nature, you kind of have to make more decisions to highlight stuff you if know what I mean?

That's why orks and space marines are a good starter army. There's a lot flat angles, plates and general large surface area. I find the details for orks really get into the faces and trinkets, belts and weapons and stuff. Same with marines. But the chunky oversized armour of the ork boys are fun to highlight. It's like with the chunkiness they're sculpting more with less.

Something like most Warhammer fantasy armies, tyrannids, chaos, nurgle, dragons etc are a bit of a step up because there's so much gooseberry fool going on they seem to take an age. But a really good ork army with customisations and painted markings are really impressive. That whole big organised chaos look.

The new buggies really appeal to me. I've painted a couple of Warhammer fantasy goblins as singles just because their faces are great and... I like green.

My bro liked orks, there's something special about having the option to add stuff and their overall chaotic nature lends a more pragmatic nature to their painting, you can improvise more. I try to capture that with nids too, like visible brush strokes so they look more fleshy. Think spawn comics etc.

Marines got too boring for me after a while although I did really like the new plastic kits that were much more posable circa 1999. You could stick on grenades, the waist was ball based, shoulders were socketed. So not just the same thing 12 times like the earlier sets. Even the lead miniatures in blister picks were better than those because the sculpted poses were way more dynamic. I still have a bunch with the pointed noses, they look proper cool.

There are plenty of options for style, this guy on the 40k reddit is painting his tau in the style of borderlands: 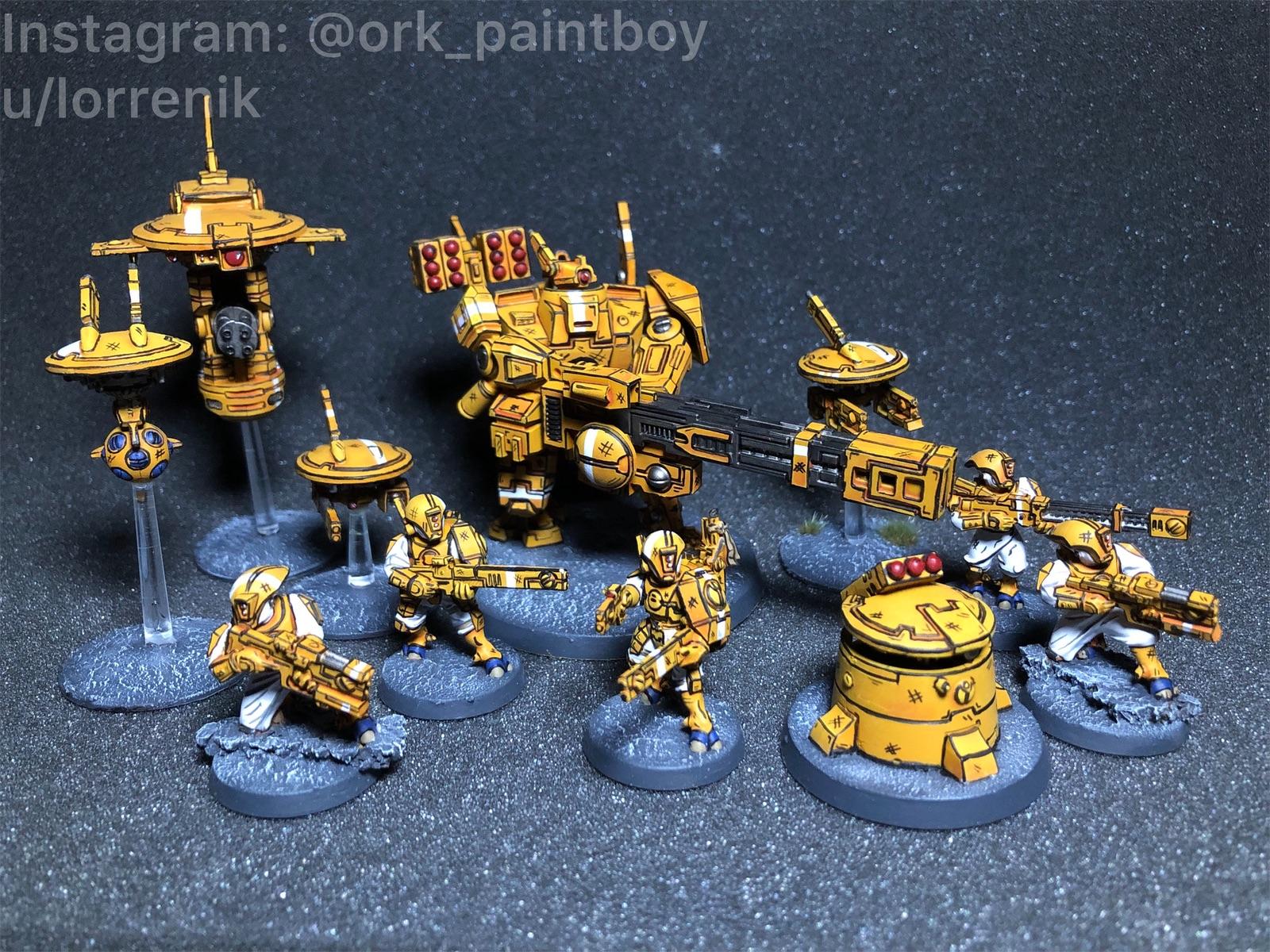 Just finished an Imperial Knight army for a team event at Element Games this weekend. Took about 3 weeks to paint up and really enjoyed painting them! First time ever using transfers too.

Loads more of my work on my Twitter page too.

They're a hybrid of paint/wash/ink, basically you can do one coat of these colours and you'll get different tones and shades. They're being marketed as a easy way of painting up armies but they take some time to get use to using.

Interesting idea but think people who can paint already won't be swapping out for them, more adding certain bits of contrast to their painting technique.

If you go to the Citadel Colour site there's loads of videos showcasing Contrast in action with tips and tricks for using it.

Makes painting models much easier for beginners, time-constrained people, or those who just don't really enjoy that side of the hobby - you can paint Contrast paints directly out of the pot onto a bright undercoat and get a decent looking tabletop-ready finish, no thinning required and just one coat needed. It's also another useful tool for experienced painters to play with, with some already demonstrating that you can achieve certain effects with Contrast paints that would otherwise take significantly more time using traditional techniques.

Using MicroSol and MicroSet on transfers made them a doddle to do. I practiced two times on an old model and then did all the Knights in a couple of nights. There's a few YouTube videos showing how to do it with the Microsol products.

more new paints, few nice ones in there

New bone colour base might be useful for nids, then use washes to fill the pits before simply moving straight to midtones and highlights. The normal undercoats I use for that (bestial brown, no idea if it's still called that, or Bubonic Brown / Iyanden Darksun) aren't "base" paints (Iyanden Darksun is "foundation" however, might be the same thing). I currently mix and layer them all, I used to do it right up from chaos black but that took years

Found something on reddit about Corvus Black, it was a Forgeworld colour (airbrush only) and is a very very very dark grey or "off-black". Could be useful for some things like black capes or throws, some weapons etc where it can be very hard to actually raise any plate detailing etc. from an Abbadon Black (previously Chaos Black) without it just looking like a splotch of grey on top with edge highlights. Such as my dark elves. 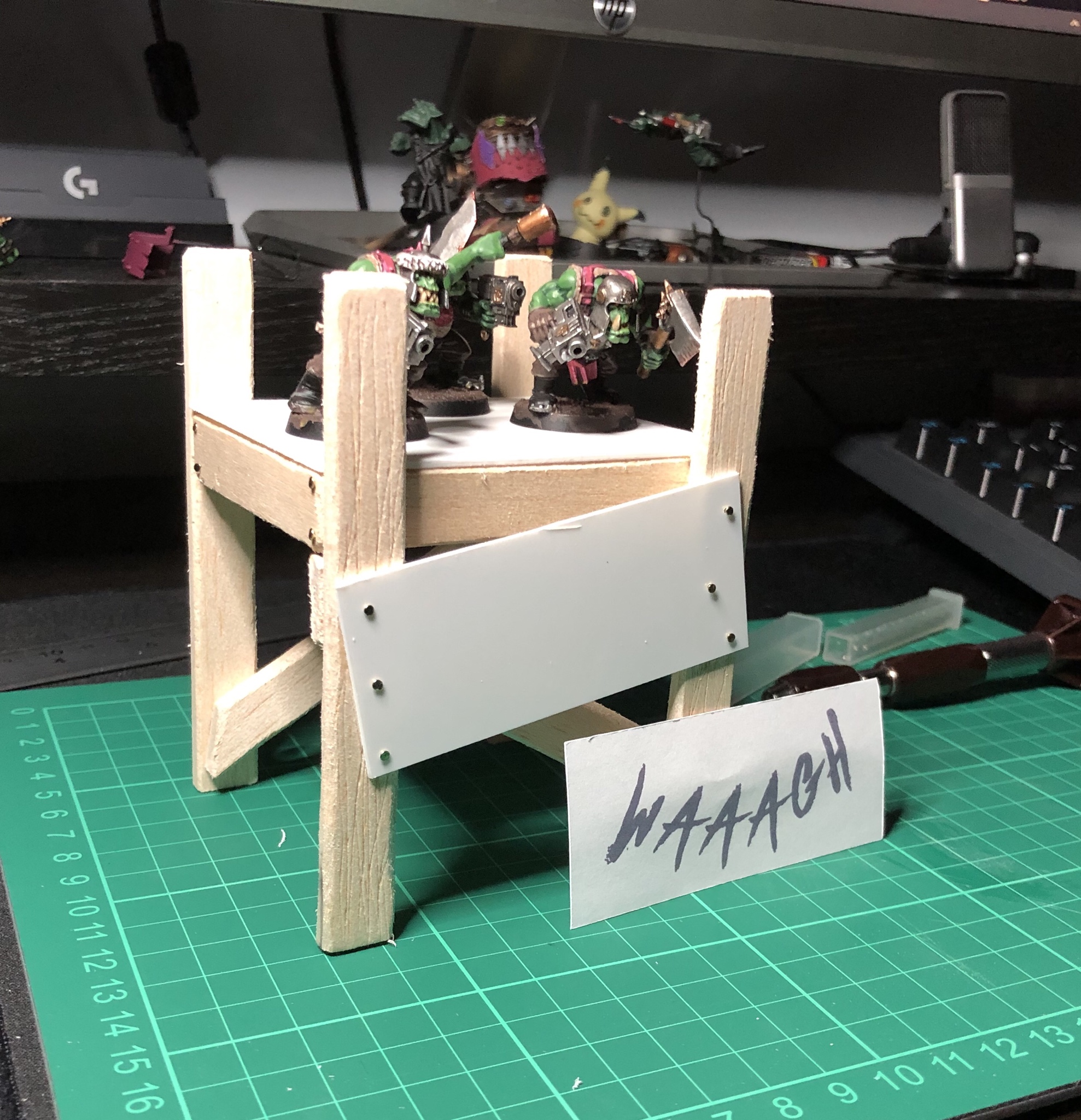 wanted to have a little play with some different hobby materials and get a feel for them, so made a little tower for the boyz

not finished yet obviously, needs colour and Im yet to work out a way to translate the waaagh to the sign - ran out of wood before I could do a latter or stairway so Ill need to get some more

more new paints, few nice ones in there

That grey knight metallic base looks like a great base for doing coloured metallics with contrast paints over the top, without having to faff about putting leadbelcher then something like runefang steel over the top to brighten it up.

Loving the miniature woodwork. Putting those nails in can't have been much fun

Is it just me or are the orks a little pink? If you have a Huawei phone I can bet big dollar it's doing weird gooseberry fool with the colours, my gf's phone does that.

my orks colour scheme is literally pinks and purples

also I blame trelliz for this but he got me on the ebay train and I today I had delivered a noxious blightbringer, malignant plaguecaster, lord of contagion, and some orruk banners and bits for conversions

also I figured you might know the best way to template the waaagh printout onto the plasticard for painting?