I just use sand mixed with PVA. But you can get all sorts of stuff. Dirt works just fine, just dry it out and paint it. Who cares? It's organic and its been painted. Nobody knows that's literally gooseberry fool on there. Try eBay. People mix up their own stuff and break down packages into tiny zip lock bags. I've had some for years, that are really great!

Pop a wine or champagne bottle? Ground up that gooseberry fool.

Polystyrene packaging? Grind it up. Put it in a little bag. Spray it with a hard varnish, then paint. Etc. You can make this crap out of literally some other crap. Costs nothing.

For grass etc I have a mixture of static grass etc from ebay, some time ago I found some peat or whatever in the garden when I was 12. If I find some interesting looking piece of moss, potpourri, etc, I put it in a tiny bag. Some of its mixed up. I have a couple of ounces of static grass and "green flock" from GW some time in the mid 90s. Never ran out of the stuff. One bag will last you decades.

I use polyfiller mostly, great for creating desert/ash waste bases and let's you create an uneven surface for grass.

Yeah, I also sculpt mud under the grass with plastercine, then I just smear superglue or a varnish over the top of that to seal/harden it. Basecoat that, paint it. I've posted my stuff in here before.

If you want something that self-cures, two part epoxy / Milliput will work great. Don't use anything you need to harden with heat, as obviously you'll melt your base/mini along with it

I've got loads of different things for basing, the best one I use for most of my armies is a huge bag of Aquraium Sand from Pets at Home. Cost me like £12 two or three years ago and it's still 3/4 full. You can then add some larger bits of aquarium gravel to give the basing a more rugged feel/more texture it's great.

Polyfiller etc is also great to use, can sometimes be a bit hard to spread around a model without making a mess but it's definitely doable. I like using cork floor tiles to glue on and then build up around them gives you a good base to put your model on.

One of my models (my Idoneth Soulscryer) is being featured on the Hobby Catchup show on Warhammer TV on Twitch at 6pm tonight which feels awesome. I wasn't happy with him either but GW want to feature it so wasn't going to say no.

Congrats on the feature! I kind of wish I pushed it when I was 12/13 as they used to take my minis around the store and show staff. Perhaps I still could but, y'know, time focused on actually making some money etc. I don't think anyone paints minis for the £££

I'd probably say the same thing about music and all my other "relegated hobbies", that I've actually had some success with. Easy to forget about these things.

I've got a variety of things to tart the bases up now. What order do I do this in?

Assemble model, glue and dip in the material, then prime it all?

Prime it all, then glue and dip, then prime again?

Option a; why would you want to waste time and paint priming twice, plus the bond wouldn't be as strong as you're gluing onto the paint not the actual plastic.

Started painting today. Decided to try properly basing because I've never done that before (use to just paint my bases a generic green and then glue sand to the top and do a gooseberry fool job of painting it

). The base already had some detail, so I just added some tiny gravel like stones around the front edge before priming. My wife's assassins creed game came with two little stature things, which are useless so I decided to use those for practice, see if I could make it look like an old stone statue to use as scenery in my dark descent game. 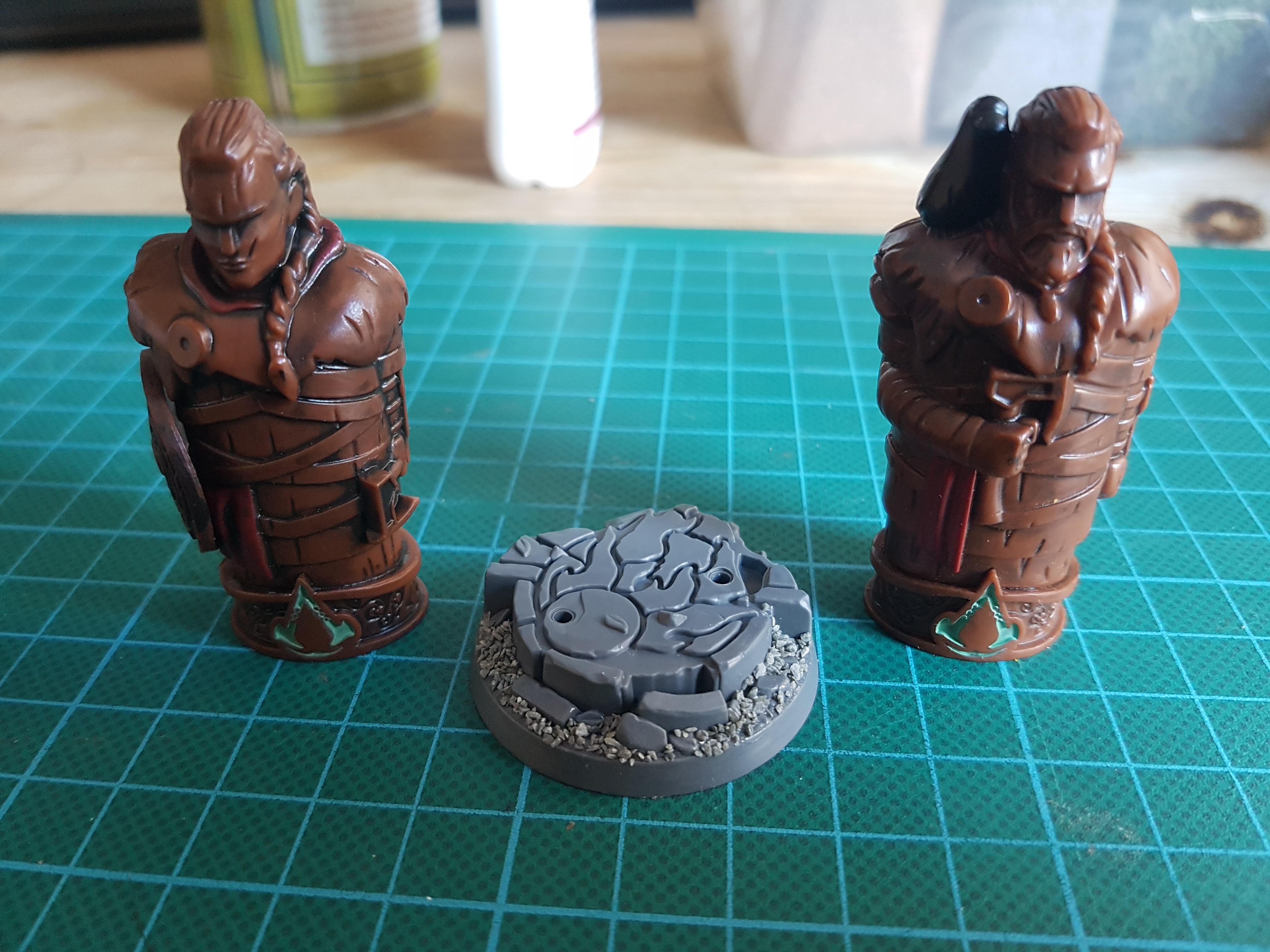 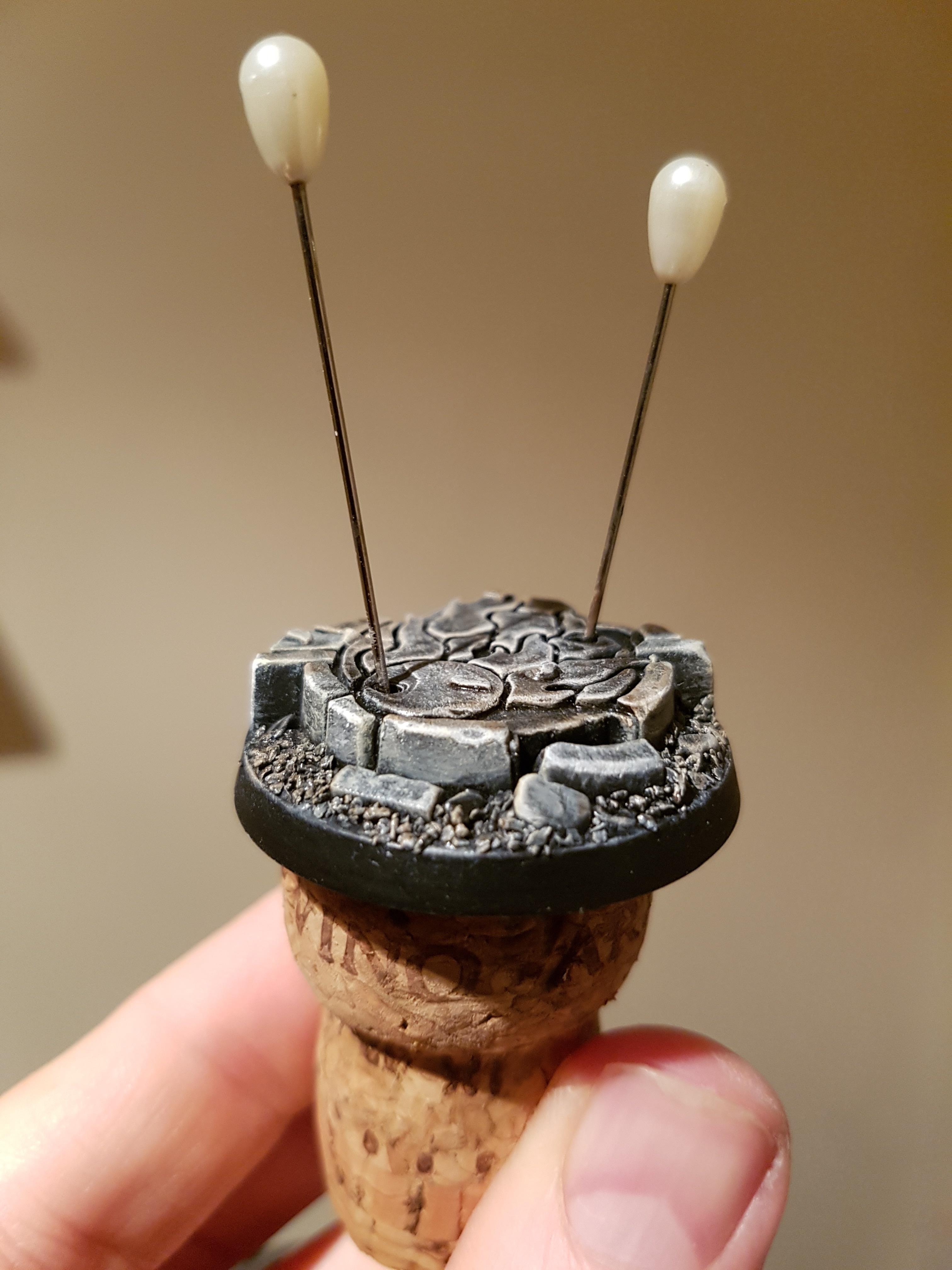 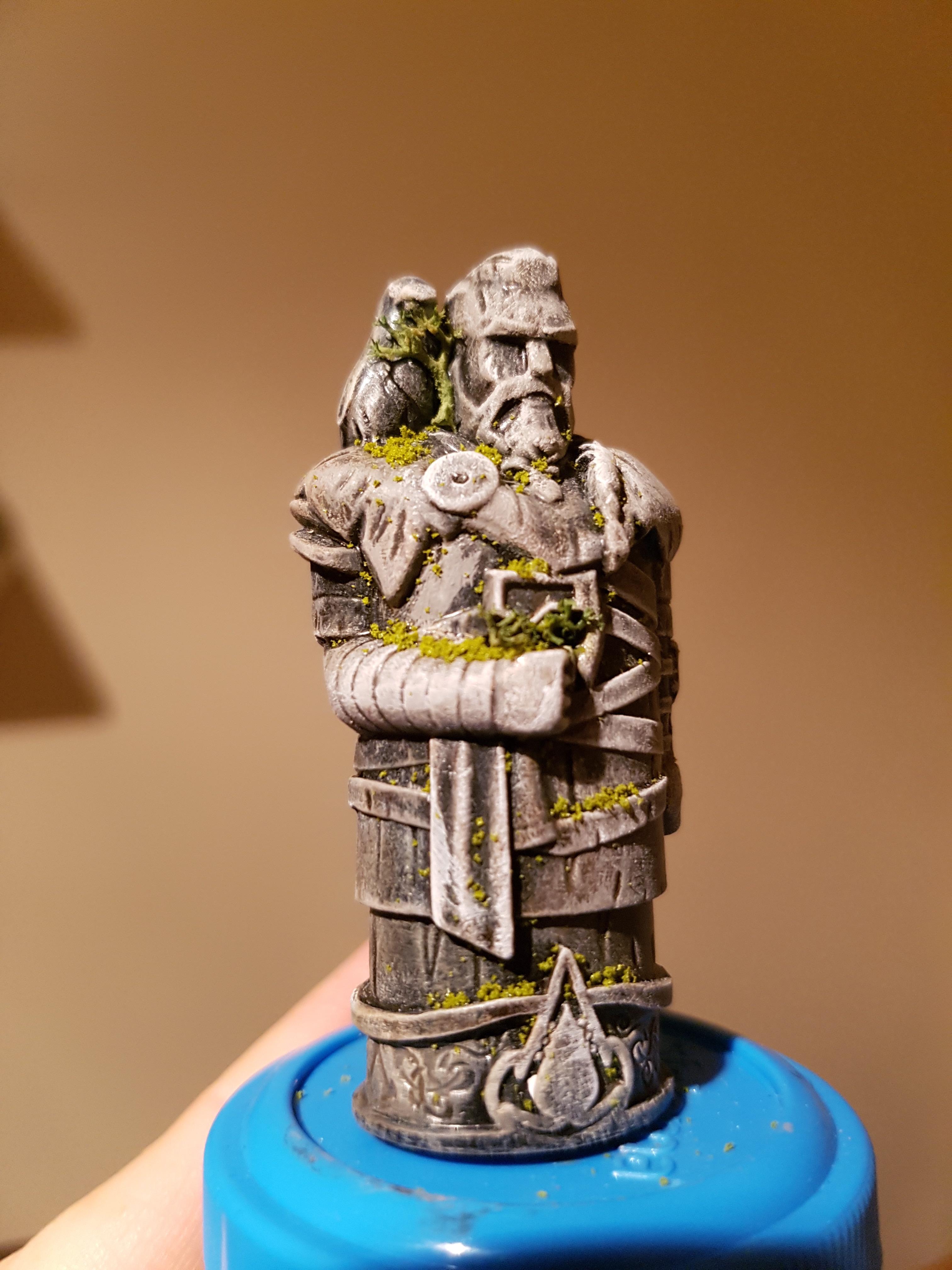 Really happy with how both have come out. Obviously they're not amazing by the standards I've seen you guys do, but for my first try it's pretty good. Ive got some good paints as a starter, but i can already see i need a few more tones for things like stone. The base will get some greenery and extra details once the miniature is attached (put stuff around it's get etc). The miniature going on that base is of a larger scale than the player characters in the game, so I'm going to try to make it look like the boss character that keeps appearing in the story. He's represented by a card and a crappy little token, so it'd be cool to use this to represent him, plus it's great practice before I paint the game miniatures.

youve done a really good job there, I started basing my latest project today and strawberry floated the glue up so hoping it works as the model is already almost completely done and would be a shame to ruin it

Hey False, good to see you. Can it be separated from the model at this point to make it easier? I strawberry floated up a few times on the base but just painted over the gooseberry fool bits and tried again and again.

no i was very short sighted when i put it together and plastic glued instead of super glued it down, my punishment for taking too long off i suppose

That's the problem with the models that come with the game - they're already attached to a base. I wonder if cutting them off might be an option although I'd probably just do a simple colour and let the materials glued on do the work.

If they're already attached I'd leave them and work round it, mangling the feet would look worse.

I've been out of the wargaming circle for a few years now after over 20 years playing WH40K and I'm looking to get back in. Thing is I'm not interested in going down the whole collecting route again, I just want something to play. It helps my youngest has raised an interest too. I wondered if anyone had any thoughts?

I was thinking of grabbing the newest 40k recruit edition but I worry I'll be tempted to start collecting again so that's out the window.

I've been eyeing up Warhammer Underworlds as a nice boxed game which seems to tick all the boxes. Has anyone any experience of playing it?

He's also into Star Wars so I thought about Legion or X-Wing. Of the 2 I'd probably buy Legion because I've got a mate who would probably play it too under normal circumstances. Again, any players out there?

I haven't played it, but Star Wars: Imperial Assault looks great, because it appears to be a reskinned version of Dark Descent, which I love. You build the level as you open doors, and an app can run the quest for you.

Carlos wrote:I've been out of the wargaming circle for a few years now after over 20 years playing WH40K and I'm looking to get back in. Thing is I'm not interested in going down the whole collecting route again, I just want something to play.

Do you want a miniatures game or a wargame? The difference is that there are plenty of wargames that come in a box with cardboard counters, no collecting or anything else and tend to be historical games. Alternatively there are plenty of wargame-like boardgames that have miniatures with a variety of themes and settings and are also fairly self contained.

Carlos wrote:I've been out of the wargaming circle for a few years now after over 20 years playing WH40K and I'm looking to get back in. Thing is I'm not interested in going down the whole collecting route again, I just want something to play.

Do you want a miniatures game or a wargame? The difference is that there are plenty of wargames that come in a box with cardboard counters, no collecting or anything else and tend to be historical games. Alternatively there are plenty of wargame-like boardgames that have miniatures with a variety of themes and settings and are also fairly self contained.

I still like the idea of a few miniatures, hence Underworld or Legion. I like the storytelling aspect of wargames more than strategizing.

Sounds like rpg-lite games like Imperial Assault might be an idea, it's more of a narrative focused game; underworlds doesn't really have a story as such, GW frame it as a quick to play tournament game so strategising is the entire point.