Yep, just queued it via Smartglass. Cheers for the heads up.

more heat than light wrote:Yep, just queued it via Smartglass. Cheers for the heads up.

I cued it up this morning in bed on smartglass, forgot to let you guys know.

We missed out on when someone used smartglass

. But then Photek made amends

Sorry, I just use it all the time, from checking sales, to messaging to arrange online games to comparing my 'chievos with people (bar MHTL

), arranging my pins and watching my captures/viewing my screenshots. Elite: Dangerous is heading for full release on Xbox One next month, developer Frontier has announced.

Braben added that Ships and modules picked up through the preview build won't carry over to the full version. Instead, players will receive their value in cash – to be deposited upon the game's release. Preview players will get an exclusive mystery reward as well, according to the dev.

You can currently pick it up for £25 in the Game Preview Program. 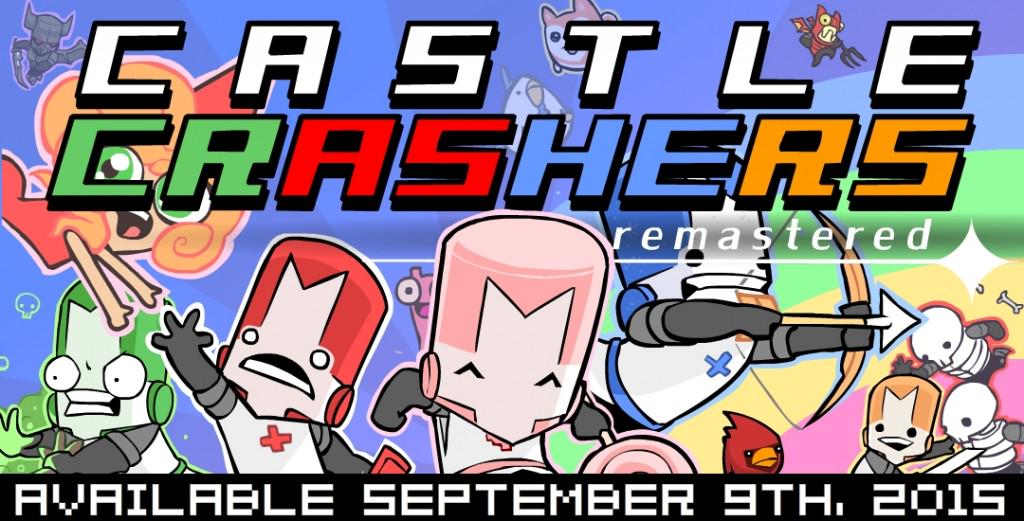 September 9th, 2015 is the release date for Castle Crashers Remastered (CCR) on Xbox One! Yeah!! CCR being our new improved version of Castle Crashers, of course. We’ve been working on this update for the past year. Whew!

Castle Crashers Remastered on Xbox One will be $14.99 which is our usual cost of admission for this classic game baby. However…if you’ve previously owned Castle Crashers on Xbox 360, you shall receive our Thank-You-For-Saving-Our-Lives-That-One-Time special price of FREE THROUGH SEPTEMBER 20th with current Xbox Live Gold membership. Be sure to scoop it up early if you want to take advantage of that awesomeness. $0.00 for our game feels like a pretty good deal to me!!!!! (I’m not much of a businessman though!!!!)

The good news is starting September 21, 2015 we’ll still have a loyalty discount for Xbox One owners, which will bring CCR’s cost down to only $5.00 if you’ve owned it before. This special $5 price is available for any Xbox Live Gold members who are previous owners of Castle Crashers on Xbox 360.

What's with all the US pricing?

more heat than light wrote:What's with all the US pricing?

that's just how i buy them as its much cheaper than uk.

The Flame in the Flood encourages you to put long-term goals aside and live in the moment, to make choices and overcome short-term problems with risky but satisfying spontaneity. Despite the awkward menu system, it’s an absorbing game that lets you experience a journey in the present, and fully appreciate the sights, sounds, and joys of floating down the river in its alluring world.

The Flame in the Flood has a beautiful aesthetic and a strong structure, welcoming a larger audience with its accessibility options. The trip down the river is a rocky, dangerous one, but there are rich treasures and exciting tales waiting to be discovered by those brave enough to take the journey.

You get to have a different survival story every time, in a lovely setting, whilst discovering hints of civilisation in the emptiness – feral children who share arrows with you, the distant radio signal that is your first objective, fires that are lit before you arrived. What's not to enjoy? Just watch out for the strawberry floating wolves, obviously.

Even with its flaws, The Flame in the Flood remains an engaging and challenging survival game. It may seem brutally difficult and maybe even a little unfair to beginners, but once the basic concepts of crafting, item management, and fending off wildlife are fully understood, surviving the harsh environment becomes much more feasible. Scout's journey is definitely not impossible, and overcoming the punishing tribulations only serves to make her eventual victory all the more satisfying.

The post-societal visuals of crumbling buildings, broken-down cars drifting along the flooded river, and menacing wildlife lurking in the distance, paired with an excellent folk rock soundtrack featuring Chuck Ragan, creates a unique atmosphere of exploring a desolate frontier. It's easy to become absorbed in this world and end up spending much more time on this treacherous river than you initially intended. That is, until it swiftly kills you without remorse. It seems mother nature is a cruel mistress indeed.

Superhot getting supergood reviews: http://opencritic.com/game/2248/superhot (PC versions reviewed. Will be on XB1 next month, apparently.)

Hello, Microsoft family! Teslagrad is coming to Xbox One!

We’re very happy to announce that our beloved Teslagrad is landing on a new platform. The Xbox One version will be released on the 9th of March!

Teslagrad will be available on the Xbox Store and it will also be showcased at GDC Play in San Francisco, California, March 16-18 at booth PL221. If you’re going to attend the event, please don’t hesitate on visiting us.

i'm getting super hot when that hits xbox one. All the vids look great.

No idea why but it bugged the gooseberry fool out of me and turnede off the game, it's a pretty stupid reason to be put off something, but we'll there ya go.

Microsoft’s XNA programming framework isn’t supported natively on Xbox One, but there’s an open source solution for developers called MonoGame. This news is a little overdue, but we’re stoked that MonoGame support will be coming to Xbox One soon, thanks to Tom Spilman and our friends at Sickhead Games.

And we’re really excited to be able to welcome MonoGame with a bang, thanks to a partnership with another developer named Tom – Tom Happ. I met Tom at an indie dev event shortly after we confirmed that XNA was not natively supported on Xbox One, and I remember being super bummed that his game was not going to be able to come to Xbox One straight away. Well, today I’m stoked to be able to say that Tom’s game, Axiom Verge, is going to be one of the first games shipping on Xbox One using MonoGame. And hopefully that’s just the first of many!

The Turing Test is a first person puzzler from the developers of ‘Pneuma: Breath of Life’ that explores the phenomena of consciousness and challenges the meaning of human intuition. Take control of Ava Turing, an engineer for the International Space Agency (ISA), and progress through a narrated story of introspection and morality whilst uncovering the hidden mysteries of Europa. Delve into The Turing Test’s human interaction puzzles and arm yourself with logical and methodical thinking. Take on tests designed in such a way that only a human could solve them. In an evolving story based on mankind’s inherent need to explore, protect and survive; players search deeper into Europa’s ice crusted core and transcend the line between man and machine.

Investigate the truth behind the ISA research base on Jupiter’s moon Europa. Solve puzzles using your Energy Manipulation Tool (EMT) to transfer power out from one object and into another. Power up and take control of artificially intelligent machines, manipulate giant structures and solve complex tasks; all woven into a multi-layered story based on the human struggle for control. The Turing Test can only be experienced through the interactive medium of video games.

The Turing Test sparks your synapses into action in this electrifying new first person puzzler, as players learn the true cost of retaining human morality.

From the designer of the original Alone in the Dark and Little Big Adventure, comes 2Dark. You play as an ex-cop adrift ever since his children were kidnapped and he lost his wife in horrible circumstances. While searching for your children, you learn by chance of a similar case that took place in a run-down suburb of the sleazy town of Gloomywood. You decide to go there to dig up clues! And you aren't disappointed…

The object of the game is to rescue as many children as possible from the claws of psychopathic serial-kidnappers, and the task is daunting. You have to take on a slew of serial killers in their lairs, avoid their henchmen, and slip by their traps. You only have your trusty Smith & Wesson with you on your adventure, so you must rely on your skills and wits if you are to succeed. And that's not all! You then have to find a way out, accompanied by terrified and disobedient children. Over the course of the different levels, you will discover what has been terrorizing the town of Gloomywood!

Announcement trailer for To Azimuth, a narrative-driven alien abduction mystery following two siblings as they search for their brother in the humid haze of 1970's Alabama. From the creator of Three Fourths Home: Extended Edition.